Imagery has here given rise to an Orwellian mantra that has become the center of the world in the wake of the world coming to a standstill. A new seven-color heavenly body to brighten windows, storefronts and windshields. Transparency has restored its hidden barriers: nobody move, but it’s going to be okay, or, at least, this window will be okay if it goes nowhere.

Quickly, perhaps too quickly, we feigned immobility to better start moving again, on the back of It’s going to be ok, trotting along, slipping down the commodified surfaces of hydro-alcoholism. Disinfection made pleasant is compelled to the wandering, to the relentless seriousness of the two bits of parentalizing that guarantees future well-being.

A powerful infrastructure of emotional presentism sets up its psychic beams while the material framework impassively observes that the omnipresent architecture has not ceased to be motionless, this base indifferent to panic, letting itself be embellished with North American egotism, only to later explode despite the collective anger in Beirut. What theory of ruin would the buildings imagine in their tacit indifference to human beings? In the meantime, no one asked the windows if they were happy to be broken in the name of George Floyd and others. Their answer is all over the walls: all the windows in the world are happy to be broken if it is to save Life, their transparency is only beautiful because they reflect. Even the buildings dream of defunding the police and reinvesting in the socius.

Thus, the building has perhaps never reasserted its immobility as much as during the last year, reminding us that its fixedness is only the contact surface between a calculation plane folded in concrete and our convoluted contacts of voluntary isolation and advertised exits.

The built environment is perhaps the last inalienable aesthetic figure that is still mired in Surrealists’ hopes for pure art. For the built environment is constantly being cleansed – without alcohol, it should be noted – and displayed in its innate stabilizing and structuring purpose. There it stands, unyielding to the biological dangers that are currently undermining normalcy. It watches the light and the seasons glide over it like a projector beaming over all its surfaces.

The inflection of the structure creates its frame, its bulky shape that is spatialized based on its outline. New York’s Twin Towers, standing as one straight line, the creepage distance needed to sustain the screen-world, a starlight that revolves around it, a cinema that is set up without a camera because it is now as important to be able to see in calculated light as in natural light. It is just as important to visit buildings in real life as it is to visit their models to see the life of their Idea, their unconscious, perhaps to better understand their immortality.

Black and white’s bipolarity drives out the gray in a digital art with a mechanistic purpose. It does so by a shift of light in the architectonic that beats its rhythm, by an execution that unites intentionality with calculation. The structure has always been ready for the end of History, has always known that it could continue to make beauty revolve around it, that we would not get tired of angles as we would of images.

As much as the building summons the mystery of what it conceals, it makes do with the riddles of its exterior. It maintains the asymmetry between the accommodation and the occupant, which results in it having to shoulder much more than is usually called for.

This is why it does so well when simulating a numerical repetition, stripped of all nature, left to the binary interpenetration of light and darkness, as it is a revealer of the gravitational curves that surround it. The structure undergoes the organist wishes of its surroundings at the same time as it powerfully incarnates the absolute passivity that Žižek said to be the suppressed fantasy of our awareness of self-centered subjects. What surrounds the structure, what wears it down, becomes its enjoyment, beaconing small deserts in the vast desert of the real.

Small deserts that a It’s going to be okay mixes up into a patch of sand in a park, as arts and crafts becomes institutionalized in stickers and car decals, as the building’s decoration confirms, even more so than at Christmas, that we are living on a rainbow’s trail at the risk of not living anything at all.

A choice that is not, however, up to those who do not have windows, as at the homeless and displaced persons shelter on Notre-Dame Street in Montreal this summer, where there was no rainbow. When there are no windows, the building that suffers from not being able to sketch the inside of its It’s that may no longer be okay, brutally reminds us that the living always rubs shoulders too closely with functionalism, until it turns it into its luxury. 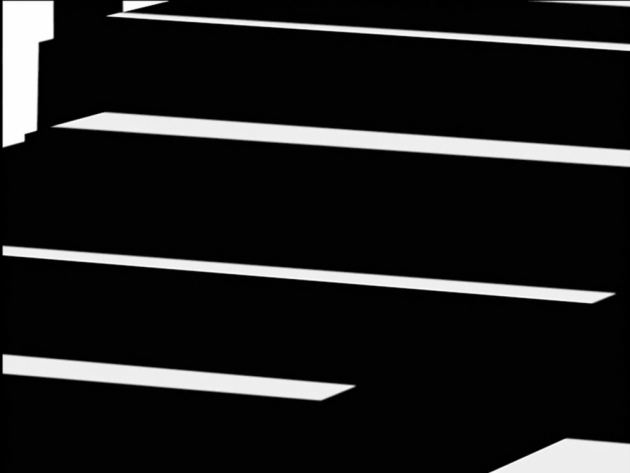 The structure, by being the agent of a mediation between the organic and the organized, between the living and the inside, reminds us that the unspeakable is chiseled on the crest of the real and its outline. That the latter stops on the threshold of humanity by reminding it of the aesthetic possibilities of any structure made foreign, even if only for a redeeming moment, to its primary purpose: the building as an instrument, the great organ of the days that pass and of a loneliness that it makes easy to communicate.