If a landscape trembles, it is because a story buries the turmoil. The fog must then be faced head-on, not so that it dissipates, but so as to be absorbed. And then even without really knowing, not even the short of it, we understand. Understanding means always grasping what hides between the lines. Between the layers of fog. Here, between the images laid out in mosaic. In the reel of life. Between the photos that we slip between our fingers, the faces we identify, a house we find, a child who watches, remembers. And on the screens we touch, in front of which we lie, films from another time suddenly emerge and come forward. Children turn to look at us. Every space, we are convinced, is haunted. And, before this film, we stand as strangers searching for something. 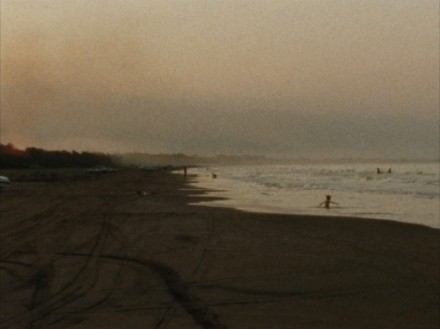 I recall a scene from Chooka, the subject of this piece, in which a subjective camera is used to explore an old dilapidated schoolhouse, where flames have scorched the corners of the walls. Set in the province of Gilan, in northern Iran, the blown out windows reveal a green, humid world where the fog, it seems, will never quite lift. On the walls, a few green ceramic tiles still hold. The remaining thousands have peeled off and shattered to the ground, like shells spattered from the sea. The sound of the filmmaker’s footfalls on the ceramic is slow, soft, yet the cracking nevertheless echoes deeply, is stamped in memory, and the viewer suddenly and unwittingly becomes melancholy. May the simple analogy between these anonymous, indiscriminate ceramic tiles and the lives of all those that this story has unearthed without digging deeper be perhaps too easy to feel? This sound – precise, tangible, yet at the same time inconspicuous – unleashes an astonishing burst of violence that the film otherwise stifles. It evokes the crackling of the fire that has set the building ablaze, the sound of dry wood from the story that crumbles as it is leafed through, recalls the rain that falls impervious to all this turmoil that is comprised of cement, exile and fleeing in the night. It is also tempting to spin the allegory. For what do the filmmakers of this beautiful film do, if not put together the proverbial “pieces of the puzzle”, while admitting that this story will always include gaps? These pathetic ceramic walls also recall the photomontages strewn on the carpet, which try to match up places, images, and time. But something will always be missing. Faces will remain forgotten. A part of the story left untold. The witness who saw is no longer there to speak. In the burned building, the film – having reached the end of the reel – suddenly glows and fades away. Only ghosts remain. 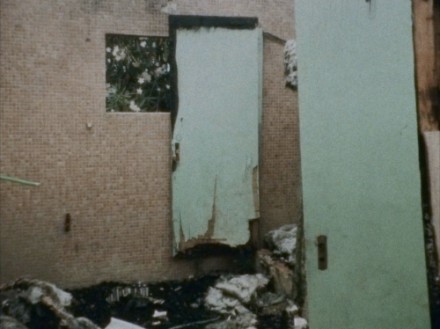 On the screen, other screens light up, creating another space. In the frame, other frames deconstruct another time within the same place. 16 mm film intermixes with shaky surveillance camera video footage. 16 mm shots display a parade of bearded demonstrators viewed on an iPhone. The film is replete with intermingled image schemes. Outdated faces forever seized by small forgotten films. The bright red robe indicates that it has been shot using Kodachrome film. It is 1970, before the Revolution. A factory is inaugurated. A worker who had experienced that era tells us that foreigners used to live here. Canadians. Americans. A magnificent wide shot of this factory, its huge press rolls spinning, fills the frame. You may think they were making plastic film, celluloid even, instead of paper. 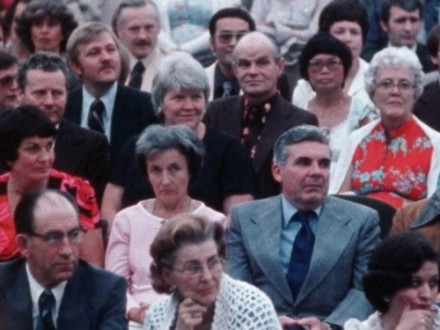 This factory run by foreigners – the text on the screen tells us – began operations in 1973, not long before filmmaker Bahram Beyzaie came to shoot Stranger and the Fog. And it was also in this same region that, after the Revolution, Beyzaie directed one of the classics of the Second New Wave of Iranian cinema, Bashu, the Little Stranger – about an orphan who has fled the South and the war and ends up in the north, industrial, cold. Another story of strangers and fog. These landscapes, from bygone days, scroll across a computer screen, laid out on a carpet. We learn – indirectly, for everything in the film is suggested – that the Chooka filmmakers have stumbled upon the house and the family that hosted that film crew. The grandfather passed away, but the grandmother remembers. A young boy, the grandson, gives Farsi lessons to one of the filmmakers, who has come with his friends to piece the story together. The boy takes us on a tour of the grounds around his house by sifting through surveillance footage. The tree he points at with his mouse, he tells us, has yielded much fruit this year. 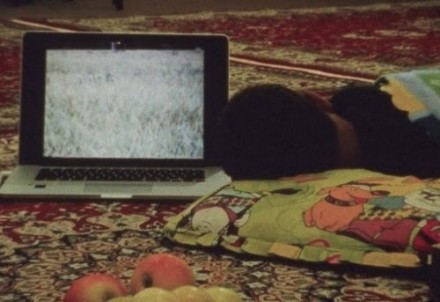 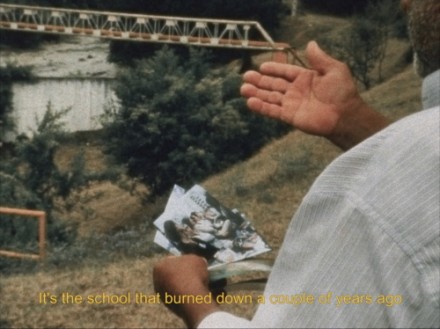 Dialogue and images provide snippets of history. But a finger pointing, a small arrow to indicate a name, an attentive glance must prevail so that a layer of memory can unfold and unravel like the tall trees quivering in the fog that the camera captures. The film’s strength lies in a type of gentleness, which neither proclaims nor condemns anything in particular (neither the invasion of foreign capital, nor the Mullah regime). It merely lays out the fragments of a family album that has survived oblivion and tries to fill in the gaps by revisiting the cracks that time has concealed. Like a stranger, it invites us into a home, a memory. And extends us a little hospitality.

André Habib somehow became professor of film studies at the Université de Montréal after working as a videostore clerk, while remaining a cinephile and critic, and without ever having been able to direct a movie. He joined the team of Hors champ in 2000, with Simon Galiero, Frédérick Pelletier and Nicolas Renaud. Since 2016 he is chief editor of the journal (with Renaud Desprès-Larose, Nour Ouayda and Olivier Godin). He has published over 250 articles and organized more than 30 public events. He is the author, among others, of La main gauche de Jean-Pierre Léaud (Boréal, 2015) and L’attrait de la ruine (Yellow Now, 2011).