This text is presented as part of the ÉMERGENCE series, organized and presented by la lumière collective, in collaboration with the online journal Hors champ and Offscreen

The image struggles to fix itself; it dazzles us with a start, barely a frame long, leaving us with the feeling of having glimpsed something. Such flickering pulsates throughout Not Moldova, 1937 like the traces of a sometimes selective, sometimes suffered blindness. At the beginning of the shot, in the middle, to conclude it, this flickering makes us doubt and wonder if we have indeed seen the image. The camps, Moldova, remnants of a memory: Madi Piller’s, Europe’s, the Western world’s, mine, ours. It falters, perhaps does not exist, elusive and indelible. Deportation almost bound to the length of its recollection, as if one did not exist without the other, and with them, forgetting; perhaps it was the glimpse of a photogram. The image is too fleeting and extinguishes all certainty, and in this uncertain state, the first impulse, as if resisting meaning, is to bring the flicker back to what it technically is, a flash of light through the lens of a camera.

First there is the shutter, which indicates the number of images per second from which an exposure time is derived (in the case of cinema’s typical 24 frames, it comes to 1/48th of a second due to the shutter interval between each photogram). Then comes the diaphragm, a mechanical iris with a variable diameter and, finally, the filters that can be placed before or after the lens. All these data – presented here quickly and with far too little detail to really point out the mechanical subtleties of a movie camera – are complex ideas that can be summarized simply. The cinematographic image is the result of exposing the film to light of varying intensity, the spectrum of which ranges from an image without light, black, to a fully lit image, white (a reversible interval from negative to positive). Hence, it may seem that the challenge for an image is to find the right balance within this spectrum; the one that will produce the clearest result, playing between the flipsides of disappearing: overexposure and underexposure. But the image’s clarity seems fragile, disqualifying alteration as being a signifier. For example, how can the glare caused by sunlight reflecting on water be accounted for if the camera is configured to counteract blinding? How can the eye’s slow adjustment to darkness also be shown if not by imitating a progressive opening of the diaphragm? These technical ramblings and hazardous examples seem to shed little light on Madi Piller’s images. However, in this learned vocabulary, from the mechanical iris to the organic iris, the time allotted to light to imprint itself on film seems to jumble with the time taken by a recollection to fix itself as memory. An echo emerges, giving us a glimpse, if not a sense, of a daring analogy between photographic light and Not Moldova, 1937‘s story.

Unlike light, memory does not seem to have a fixed state similar to black and white; it is only a spectrum without binarity. Although it would be tempting to associate Stage 0 with forgetting, the latter is always partial, an area more grey than black, like the words that run through the film, always fragmented, cut out, incomplete. The all community was under water, says the first voice of the film, then adds and… before being interrupted by a cough that puts an end to the speaking. The speech is affected by a form of amnesia; but which one? There is certainly the traumatic amnesia that erases in order to protect, there is also the forced collective amnesia of a history still caught up in the games of political power such as those that for years concealed the role of the USSR in the first deportations. But amnesia is always imperfect, and it cannot get rid of the indelible traces left by those who no longer exist.

The first stage of memory consists of remembering, the duty of not letting the memory fade, but it is never quite accurate, it is more of a jerky montage, like that of an old man sitting on a chair, who gets up and then sits down again, perhaps he never moved. It is within this space, between too much and too little, that Madi Piller slips in – when the screen is filled with images of the Holocaust – the foundation of today’s world, the obvious, almost caricatured incarnation of barbarity; so much so that one wonders if, shown over and over again, these images had not lost their primary value, had not become a memory detached from its reality. Like the film, memory suffers from overexposure, but also from under-exposure, for it seems obvious that as much as the repetition of this memory is relentless, its absence would result in the progressive erasure of those thousands of individuals who no longer populate the deserted landscapes of Moldova. This tension, I believe, takes shape in the flickering, where the technique of the image and its visceral relationship to memory meet.

I wonder what is hidden in these creases; so decide to slow them down, to digitally retrieve each of the photograms that make them up, to try as best I can to understand them, to provide a typology, and in turn, through Madi Piller’s memory and eyes, discuss my own. Mine receives these images that seem to have already been seen, they become blurred again and again, but never fade away.

The shot opens with the flickering of the landscape, suddenly appearing in a white flash as the pupil retracts and the beauty of this wilderness is superimposed on the ugliness of the savagery that made all life disappear. The brightness sometimes occurs in the middle of the shot, it suddenly animates the stillness, makes some clouds vibrate like a lightning bolt disturbing the calm, impeding contemplation, incessantly assailed by an elsewhere, a residual foreground. 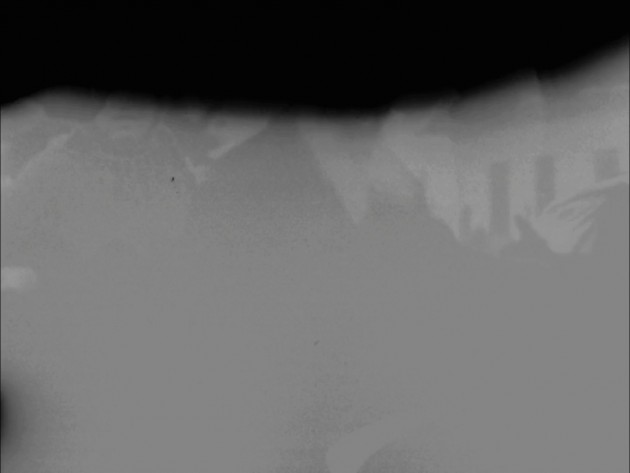 This before is somewhat distinguishable in the objects, the silverware which inevitably evokes a bygone use. The silverware which, like the hill and the river, has survived the passage of time, but was forged by a hand that no longer exists.

And then these dark figures who walk between the dunes, bodies without faces, whose evocative force sometimes pushes us to forget the humanity of these individuals. The flickering then denies us banality, forces us to keep focusing our attention, to distinguish men, women, children, and not see a homogeneous crowd of deportees.

It is this same flickering that for a moment lights up the faces in the pendants, faces sometimes preserved, often deteriorated by time, marked by the same scar as the one carved by memory.

But these faces look like decrepit ruins that speak to us while we are unable to catch exactly what they are trying to say. This flickering is the memory of what has disappeared, both the portraits and the graves whose stone is crumbling. Mortuary monoliths that we no longer know how to look at, that we would like to forget, that we must remember. So the camera also wanders around, no longer knowing how to expose itself to them.

Suddenly, the film gets carried away, the flickering becomes blinking, brutal aggression, chaos of metal under a blazing sun, the rails scroll by and the wagon lock jiggles, reminding us that in the village sky a story of death has been written in stone.

Death still lurks in the clouds, so that it is unclear whether the flickering is caused by the camera or by a thunderstorm that looms. A burning flame, the fire of burning, but also the flame that refuses to be extinguished in the hollow of a fragile hearth that we feed with words, images, and an ever-present memory so that the past continues to belong to the present.

Because it encompasses both movements, black and white, memory and oblivion, it is essentially that sudden movement, which sweeps the spectrum from appearance to disappearance, that gives the feeling of having perceived more than seen. Thwarted by my editing stratagems, this flickering finally reveals an image that did not exist until then, that was there without anyone being able to notice it. Between two photograms of a horse alone on the plain, a figure appears. It wears what looks to be a camera around its neck. Inevitably, I remember the old man; I wish it had been him: to know with certainty that he had stood up to continue the daily chores of what appears to be a farm. But in this fleeting appearance, man embodies another flicker, of a memory no longer technical or organic, but a human memory passed on to whomever still tries to see it: a presence, a reflection stamped on the film and having through the bodies – the old man’s and the man’s – crossed Moldova. The Moldova that was a roaring village in 1920, the Moldova of 1937 and the fateful march towards the train, the Moldova of Madi Piller in the footsteps of her ancestors that she watches through the lens, the Moldova of a photogram doctored on an editing table (which confirms the analogy between cinema and memory in Not Moldova) and the Moldova that is no longer, or perhaps a final flicker that defies fading in order to be seen.

By night, la lumière collective is a microcinema that projects films, videos and expanded cinema produced by local and international artists. By day, la lumière collective is an artists’ studio and residency space with multiple resources for working and experimenting with various moving image media. The collective is led by local artists and curators who believe in creating cinematic works and spaces on a human scale. We facilitate events to bring people together. We create links to help promote and revitalize cinema.

La lumière collective is rooted in the local, the physical, the here and now.

In this time of virtual connections and physical distancing, we have transformed our projection space into a virtual space, while maintaining local connections.

EMERGENCE is the adapted online version of the practical activities planned by la lumière collective. Online love in the time of COVID.
Instead of simply downloading the films and videos available online, la lumière collective has selected one work by each artist and asked that a local writer be involved with each work.

EMERGENCE is a new combination, a local connectedness, a commitment to counter separation.
We look forward to seeing you on the other side.

EMERGENCE is presented with the support of the Canada Council for the Arts.