Science-fiction and film noir do not seem like they have much in common, other than having a period of flourish which overlapped in the 1950s. By the time of The Brain Eaters, 1958, film noir was on its way out as a cycle —although most accounts that have the cycle end with A Touch of Evil have to pause to reconsider the 1961 A Blast of Silence. Which makes my suggestion that The Brain Eaters is a possible hybrid science-fiction/noir even more historically odd, coming at or near the end of the noir cycle. The Brain Eaters is a low budget science-fiction film directed by a pudgy character actor who had a prolific career before dying of a heart attack at the age of 54 in 1976, Bruno VeSota. VeSota starred in dozens of low budget horror, science-fiction and action films over his career which included directing three features, Female Jungle (1948), The Brain Eaters (1958) and Invasion of the Star Creatures (1962). Most critical accounts of science-fiction gloss over The Brain Eaters as a non-distinguished addition to the alien take-over film of the 1950s, noting the similarity of the story to Robert Heinlein’s classic novel, The Puppet Masters (1951). In the novel, Heinlein makes explicit the analogy between the parasitic aliens who take over earth and Russian Communism, as did many films of the Cold War era. Heinlein’s story is also set in the future (2007), after an all-out war between Democracy (US) and Totalitarianism (Russia). With a new Cold War in effect, alien parasites land on earth and begin to attach themselves to the back’s of humans, controlling their mind in classic “emotionless” style. 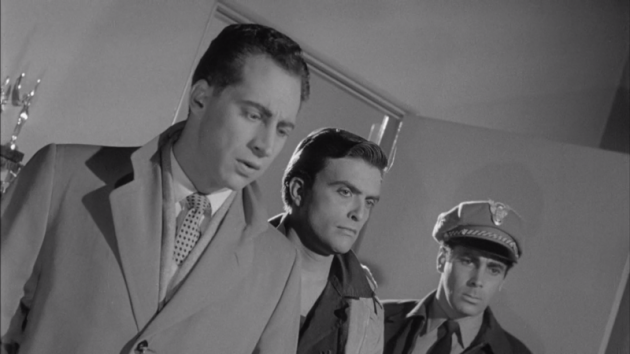 VeSota’s story, written by Gordon Urquhart, lifts much of Heinlein’s story, but adds some substantial bits to distinguish his film from Heinlein’s novel, though not enough to stop Heinlein’s handlers from suing producer Roger Corman for plagiarism. For starters, the film takes place in the present and downplays the political subtext by concentrating on an abrupt ‘alien’ takeover of the small town of Riverdale, Illinois. The most striking addition of Urquhart’s story is to make the invaders terrestrial rather than otherworldly: the parasites are hairy looking slugs from earth’s prehistoric past, according to a geologist in the film, the Carboniferous age, the age of the insects, over 200 million years into earth’s past. Hence Heinlein’s outer space becomes inner earth.

The Brain Eaters is Ve Sota’s best film of the three he directed, with Female Jungle a partially successful noir crime drama and the campy parody Invasion of the Star Creatures an enjoyable but otherwise forgettable misfire. In the latter a second rate Abbott and Costello pair of soldiers come across an alien spaceship in a crater and have to save earth from two busty Amazonian space women (who provide some pretty funny, proto-feminist putdowns of the men) and their scarecrow looking monsters. The Brain Eaters is a more mature work cinematically speaking than either of the other two, with Ve Sota managing to transmit the look and feel of a film noir, rather than aping the look of science-fiction films of the period. With the small budget he was working with this successful merging of film noir stylistics with a science fiction story should earn him more credit than the film usually gets (which isn’t much). In fact, if you watch the film with the sound off and just look at the film’s locations (dark city streets, dark alleyways, spartan rooms, cars, highways), props (cars, telephones, guns) and the chiaroscuro lighting and expressive use of canted angles and subjective camera movements, it would be understandable to think film noir rather than science-fiction. 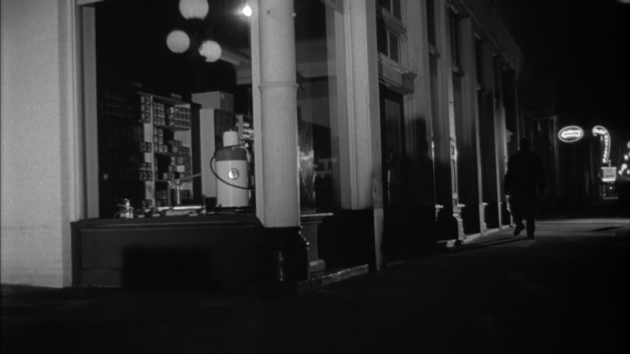 On the evidence of this film VeSota is a director with a keen visual eye who privileged mood and atmosphere over plot substance. The same film noir touch is present in his first feature, Female Jungle (1955), which is also closer narratively to the crime world of film noir. With The Brain Eaters VeSota seems to be exploiting elements he has creative control over, such as stark lighting of interior spaces, expressive camera angles and shadows, and accepting the casualties of the tiny budget, namely the special visual effects, creature make-up, and the performances from actors in small roles. Certain throw-away close-ups are also victim of some bad visual continuity between full scale shots that are lit for day time and close-ups that are staged with all black night-time backgrounds. 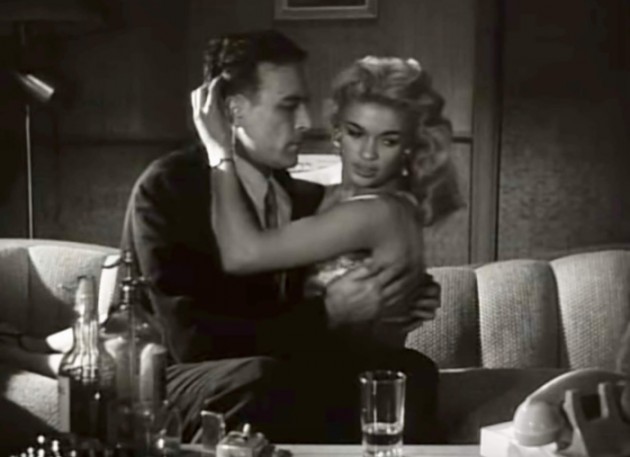 Lawrence Tierney and Jane Mansfield in The Female Jungle

The more full blown noir elements of Female Jungle (which stars John Carradine, Lawrence Tierney and Jane Mansfield) are ported over by Ve Sota to almost smother the science-fiction trappings of The Brain Eaters, which are pretty much restricted to the cone like ship that appears out of nowhere off the highway and the laughable foot long parasites that come out of the cone, looking like shuffling black wigs with spaghetti like antennas. 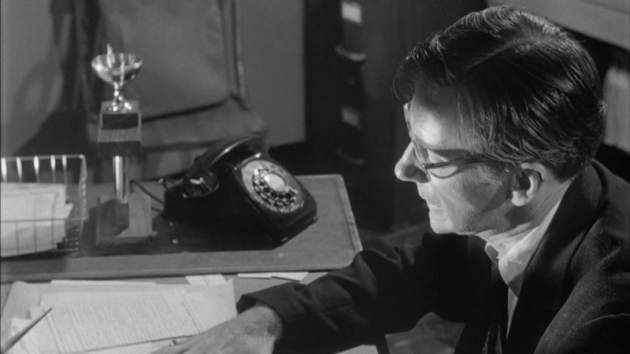 The main characters are husband and wife, Glenn Cameron (Alan Jay Factor) ) and his fiancée Elaine (Jody Fair), who are the first to find the odd, fifty foot steel cone in the woods. Glenn is son to the town’s Mayor Cameron, who will later be possessed by a parasite in one of the film’s best scenes. Called in to solve the puzzle of the alien object are Dr. Paul Kettering (played by Ed Nelson, who would go on to star in the TV hit show Peyton Place), his assistant/love interest Alice (Joanna Lee) and the caustic Washington Senator Walter K. (appropriately named) Powers and his practically silent assistant Dan (Robert Ball). 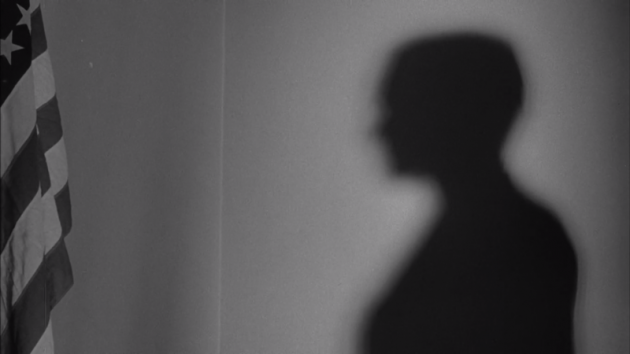 In true noir style, The Brain Eaters opens with a voice-over by Glenn which sets the events in the past, a flashback structure that apes many noirs. And typical for noir, it opens on an empty city (albeit small) street at night, with a silhouetted figure walking on the sidewalk. The use of the past as both a narrative setting and a psychological space where trauma lives is another noir trope; and characters who fruitlessly try to escape their past life. With this in mind it is interesting to speculate on this as a possible reason for the change in the main plot point from the invaders being from outer space (the classic ‘other’) to coming from the proverbial ‘past’ (earth’s own prehistoric past). Although we don’t see this, the parasites, who are referred to as “insects” have burrowed their way from underground using the ‘cone’ as a channel. Just like the trauma of the noir past, the insects do not remain “buried” in the earth’s geological ‘past’.

In Invasion of the Body Snatchers the aliens are ‘birthed’ in plant like pods. In The Brain Eaters Ve Sota opts for an approach which can better exploit the noir trappings: the parasites are carried to the next victim by ‘infected’ humans in glass bowls that emit a strong glowing light, not unlike the glowing box at the end of Kiss Me Deadly (1955). Where the source of the light comes from is never made clear from a narrative sense, but it sure looks striking to have fedora weearing men with a glowing bowl tucked under their arms! 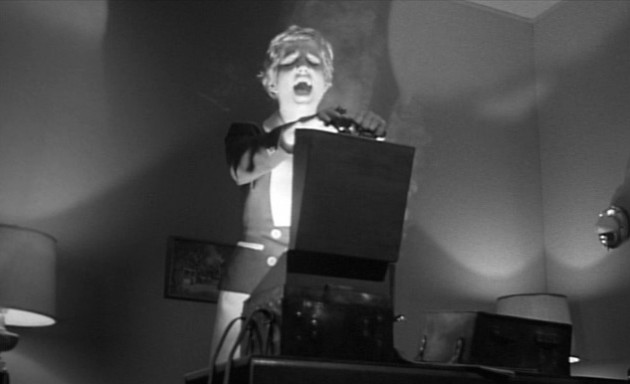 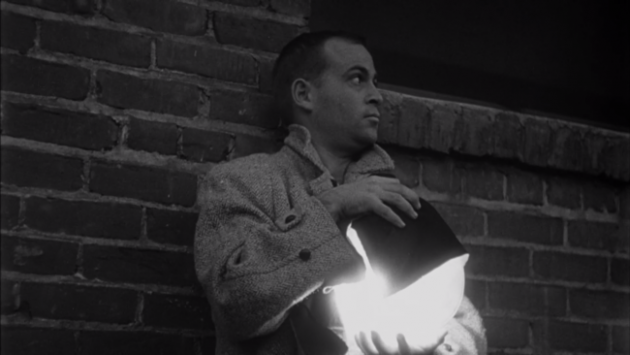 For an AIP science fiction film from the 1950s when a good monster was promised by the title and poster, audiences at least expected that! Which is the one glaring place where The Brain Eaters lets down. Not only are the creatures not ‘brain eaters’, they also aren’t really monsters, but prehistoric insects. The proverbial space ship, which in fact is a cone used to dig out from underground, is a much better conceived visual prop. I noted that compared to other 1950s SF films, The Brain Eaters plays down the Alien-as-Communist analogy, but maybe VeSota is more clever than that, as I noted that the shape and design of the cone reminded me of the famous Russian Constructivist artist Vladimir Tatlin’s seminal Utopian architectural project (a full sized version of 1300 feet was never built), his 1920 “Monument to the Third International”. Was VeSota making a sly reference to this classic Constructivist art piece? 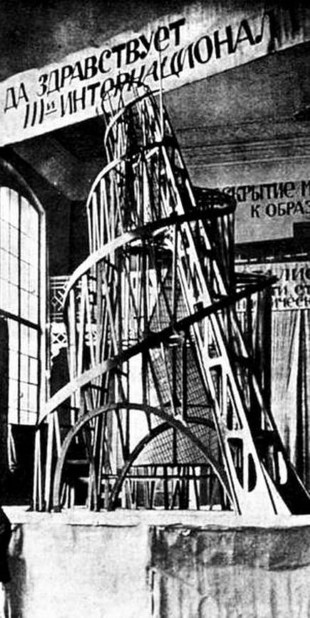 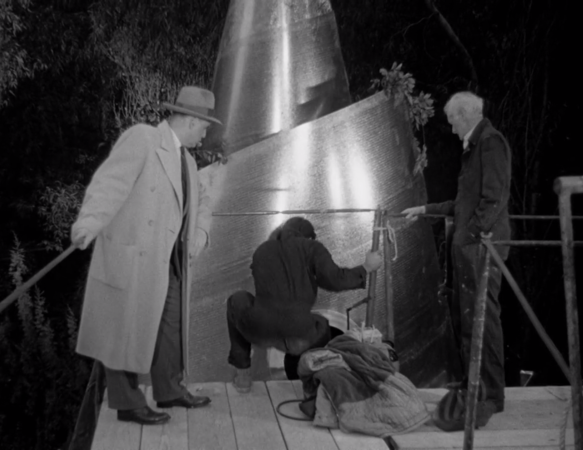 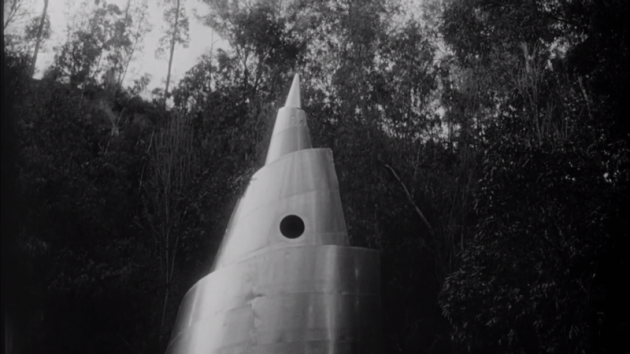 The scene which will most please many contemporary fans of classic science fiction will no doubt be the late single scene appearance of mister Spock himself, Leonard Nimoy (spelled Nemoy in the credits). Nimoy’s role is brief but it makes an impact, as his character, Professor Cole, has been chosen by the invaders to be their human form leader. In the scene Dr. Paul Kettering and our voice-over hero Glenn enter the cone to hopefully destroy the source of the creepy crawlers who are trying to take over the planet. Nimoy is dressed and lit like a cross between God and Santa Claus, in a white-hooded coat with a bushy white beard and mustache. The texture of the space is quite expressive (and camouflages the low budget set), with the room bathed in fog and a highly saturated whiteness, which makes it even harder to make out Nimoy’s face. But his voice is unmistakable, as he explains his ruler’s utopian plans for a new social order on earth. Professor Cole lays out their plan, borne out of the patience of two million years, of slowly introducing more of their kind “from below” with the help of human vessels: “Our social order is pure, innocent. It has the exactitude of mathematics. We shall force upon man a life free from strife and turmoil. Ironic, that man should obtain his long-sought Utopia as a gift, rather than as something earned.” It is more opaque and quasi mystical than the usual Communist-styled “emotionless” agenda propaganda of the standard Cold War B-Science-Fiction film. At this point Dr. Kettering resorts to the good old American solution, and takes out a gun to start shooting at Cole, which sets off a herd of “leeches” scurrying after them. The so-bad-they-are-funny ‘special effects’ were designed apparently by actor Ed Nelson, who came up with the idea of attaching a black rug and wire antennas over a wind-up toy. Given the fortuitous appearance of the actor who would be best (only?) remembered as the most famous of Vulcans, Mr. Spock, this seems like the perfect time to mention how much these furry leeches from the bowels of the earth look like ‘evil’ twins of the Star Trek ‘Tribbles’! 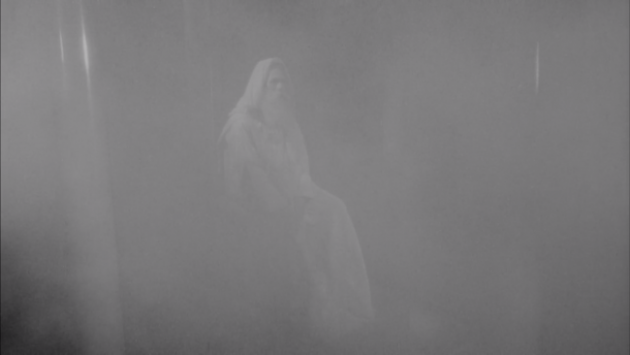 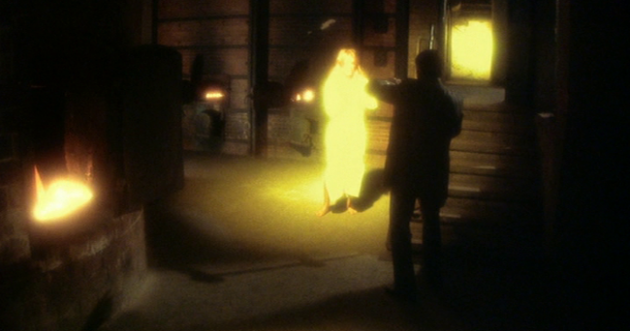 A final observation on this unusual scene, the make-up and look of the Nimoy character reminded me of the even weirder character from Larry Cohen’s religious-themed science-fiction horror film, God Told Me To (1976), the supernatural Christ like figure Bernard Phillips played by Richard Lynch. Lynch’s scenes are also restricted to a single secluded location –the boiler room of an apartment building—and he is bathed in an equally bright, overly saturated light and speaks in quasi mystical expressions. Which seems like as good enough a place as any to end this analysis of the unusual science-fiction film noir hybrid from Bruno Ve Sota, The Brain Eaters. 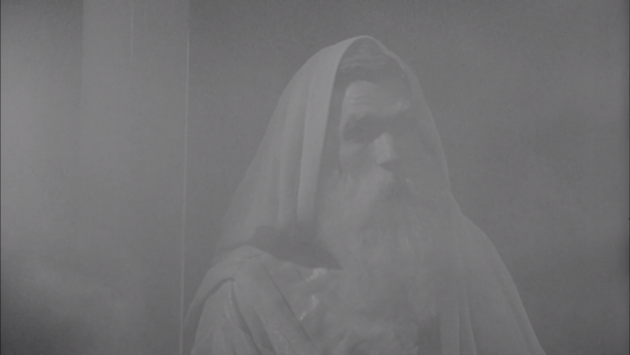 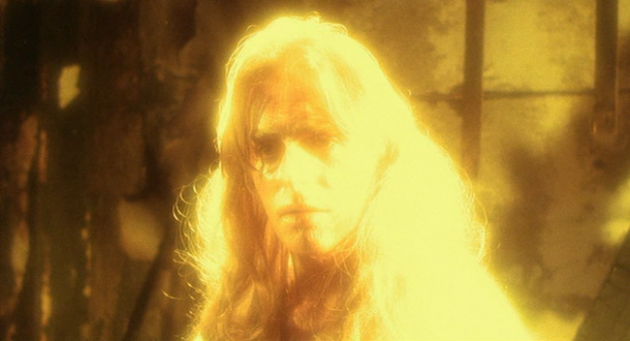