Shahin Parhami: Showing Us the Way

It is always hard to write about the art of someone you know well, but this was less the case with Shahin Parhami because he was so humble and self-effacing that you felt the need to sing his praises whenever you could. Yet it is not something I did with any great consistency, but now that the ravages of a portentous illness has taken away this gentlest of souls I feel compelled to share a few thoughts about his early work Amnesia (2002) and his last work Stem Cell II (2020). Deprived of any more work in the future (not counting his as yet unreleased works, at least two that I know of) this fact is a hard pill to swallow. Though watching the trailer of the last major project he was working on, Every Angel is Terrifying, I do hope it finds an imminent release because the trailer looks perhaps even more seductive than any of his other films. In the use of slow motion and golden sepia hue and dog scuttling by swampy waters I feel the influence of Tarkovsky that has threatened to surface in many of his prior films. 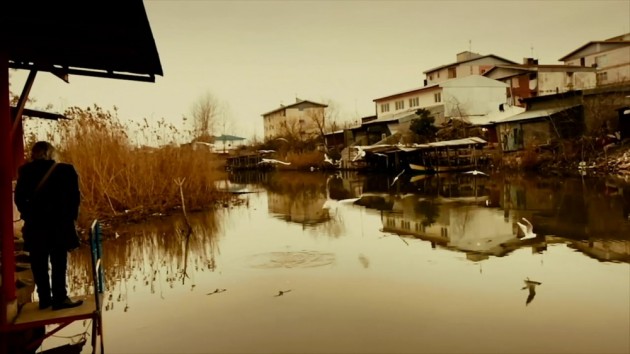 A setting which recalls Tarkovsky’s Nostalghia 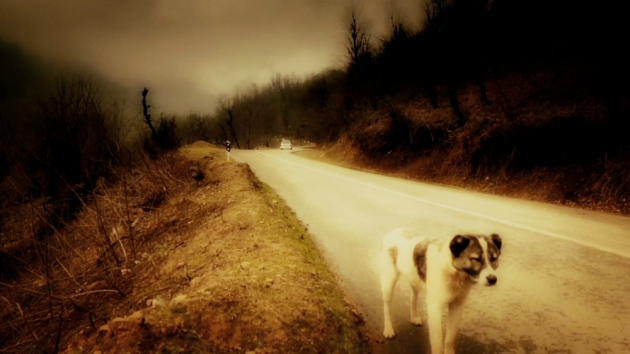 Regardless of whether or when his unreleased films resurface, Stem Cell II is the final piece of art Shahin made for the world, and as such makes it special. It is barely seven minutes long but bears the weight of a lifetime. Shahin would leave this mortal coil roughly a month or so after completing this film. Which makes it even more striking. I am always amazed at how artists can turn personal tragedy into art. And the thought of an artist being able to create with the shadow of death nearby has always struck me as the most powerful testament to the strength of the human spirit.

Through her gracious kindness, Shahin’s ex-wife and close friend Lara Braitstein sent some of Shahin’s friends a statement that Shahin had intended to accompany Stem Cell II. Shahin’s undying spirit and artistic will to share is in evidence in this statement:

In May 2020, during the Covid-19 pandemic, I was diagnosed with plasma cell leukemia, a rare and aggressive cancer. This is my perspective, as a filmmaker, of the hospital experience in the aftermath of my two stem-cell transplants to treat the disease, when I was recovering in a special isolation ward in Montreal, Canada. I was given the option of either doing this procedure or going into palliative care. So this was my last chance for remission. I am an artist who has worked in the genre of experimental and creative documentary for the last 30 years. This short film was shot entirely on a mobile phone and edited on a laptop in the hospital during the recuperation period—whenever I found energy to work on the project. The film gives you an impression of the patient’s experience during their stay in the cold institutional environment—without the comfort of friends and visitors, in complete solitude, save for the presence of health workers and the ubiquitous machines in the space. The sonic design consists of available environmental sounds I recorded alongside the images, layered with experimental ambient music composed by a friend. We also hear the doctor’s voiceover describing the stem cell transplant, accompanied by images of the invasive treatment regime from the unique vantage point of the patient—the constant injections, stem-cell extractions, blood transfusions, heavy chemotherapy, and so on. These are aestheticized visuals of procedures that many people have never witnessed, especially in the time of coronavirus, when hospital access is limited. Starting with images of winter snowfall as seen from the window of the patient’s room, the film ends with lyrical images of light striating the space, and the sun rising at dawn—offering a sentiment of hope. 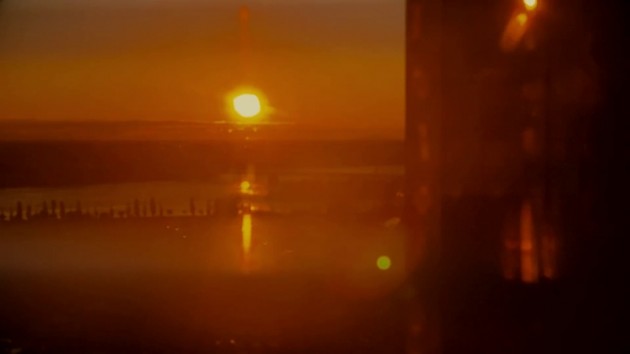 This statement is an indication of what Shahin was like. Ill and tired from the affects of the treatment Shahin wants to create something that will benefit others who may know a loved one in a similar position as Shahin, made worse by a pandemic which restricts visits and increases the sense of solitude. Shahin wants to share the experience not to shock or numb but to offer “a sentiment of hope.”

As long as I knew Shahin he was always working on something. Either in the pre-production, production or post-production stage, or planning his next project. Shahin worked tirelessly from his first film Nasoot (1997) to his last film Stem Cell II, making several short films, including the experimental-narrative-diary short film trilogy, Nasoot (1997), Lahoot (1998), and Jabaroot (2003), three feature length documentaries, Faces (2007), Amin (2010) and Shahrzaad’s Tale (2015), a collaborative performance based feature, Éclats nocturnes (2008), and two other as yet unreleased features, a documentary on the Jewish-Canadian artist Marcel Braitstein, and the experimental diary-documentary on an Iranian German literature professor and Rilke expert, Every Angel is Terrifying. 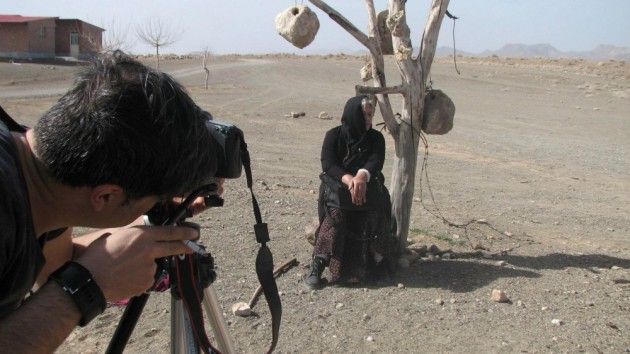 Although Amnesia was shot under very different conditions from Stem Cell II, which Shahin shot on a cell phone, they bear some resemblances. As do all his films, marked by recurring images (laneways, birds, shots of windows), visual tropes (languid moments, long takes, images of nature) and subjects (artists, diasporic artists, musicians, social outcasts). Visually Amnesia and Stem Cell II share a restricted ‘autumnal’ color palette, somber lighting and a hazy, dreamy texture. While Shahin is a prisoner to his cancer treatment in Stem Cell II, the man in Amnesia, Iranian actor Shahram Golchin, is similarly imprisoned in his mind’s past, reliving life moments, remembering childhood spaces, and is imprisoned cinematically by Shahin’s framing, against a tall wooden laneway fence. We see shadow appearing on walls in both films as well; and snowfall descends against a window backdrop (from outside the window in Amnesia, from inside the window in Stem Cell II). And most telling, Amnesia ends with a shot of its central character framed inside looking out of his apartment window. Stem Cell II ends with an almost identical shot –a freeze frame—of Shahin looking outside his hospital room window. Perhaps it is not a coincidence that this mirrors the bookending filmography of Andrei Tarkovksy, whose last shot of his final film The Sacrifice was a repeat of the opening of his first film Ivan’s Childhood: a crane up along the trunk of a tree. In their excellent book on Tarkovsky, The Films of Andrei Tarkovsky: A Visual Fugue, Vida Johnson and Graham Petrie speculate that Tarkovsky, who was terminally ill when in post-production with The Sacrifice, designed the ending to rhyme with his first film. The insertion of the freeze frame image as part of the end credit scene of Cell Stem II suggests that perhaps Shahin had Tarkovsky in mind. 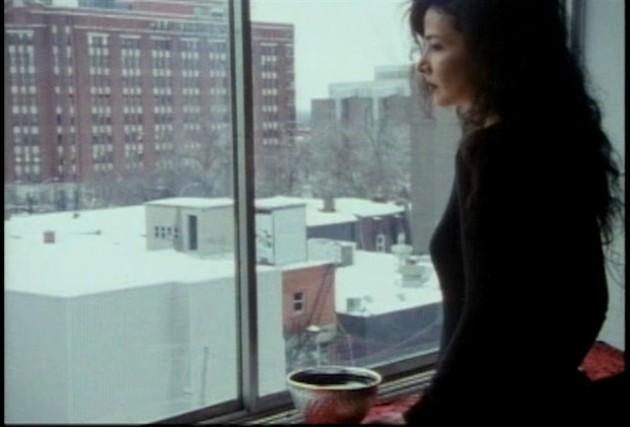 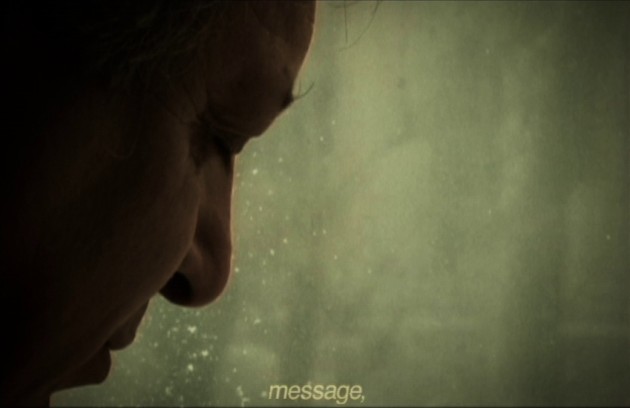 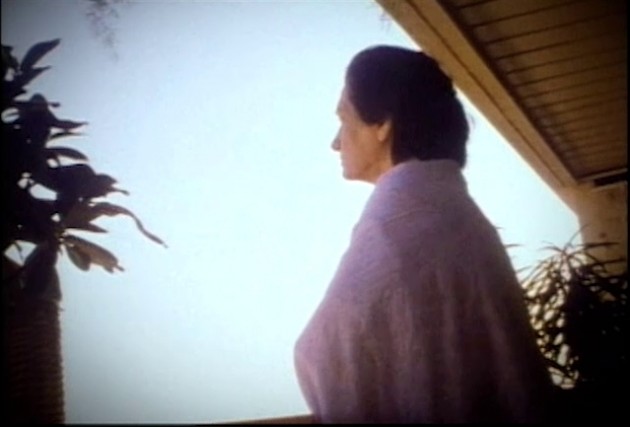 This image of someone looking outside a window is as common to Shahin’s filmography as a train was to Yasujiro Ozu’s filmography or water to Tarkovsky’s. For Shahin this image was –among many other things I’m sure— a poetic reflection of the diasporic artist, caught between two worlds, in one world yet looking out or thinking about another. The subject the artist as a worker, someone who ‘makes’ art, was a constant theme in all of his films. And Shahin felt a kinship with the many diasporic artists, often Iranian, who appeared in front of his camera. No doubt this recuring theme for Shahin echoes Tarkovsky’s own two last films which he made outside his beloved Russia, Nostalghia (1982) and The Sacrifice (1986).

Stem Cell II also feels very different from Shahin’s other films, which always feature other people and are marked by a strong sensibility for the emotions of others. If I had to explain Shahin’s style, I would say it blends an intimate (though by no means orthodox) documentary sensitivity toward the common person with a poetic understanding of the frame, and music and image juxtaposition. 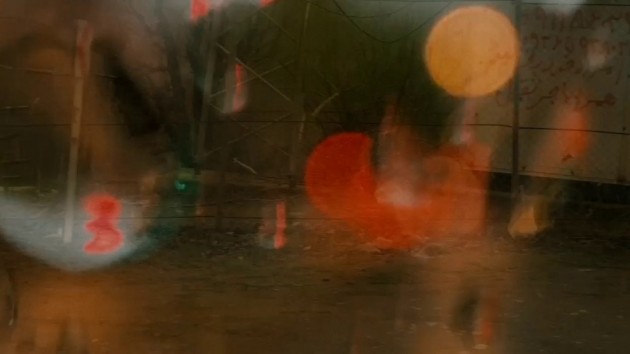 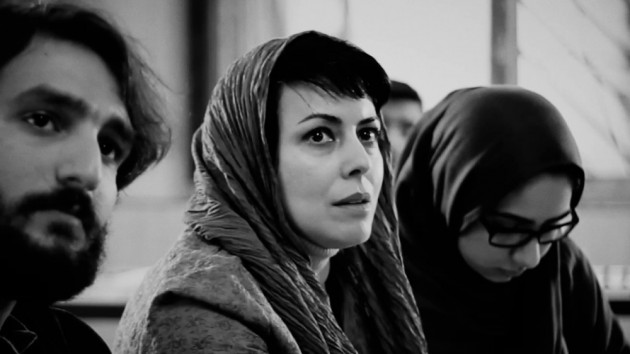 Because of the context of this film, Shahin had to turn his attention inward, on himself (which I imagine must have made him maybe a little uncomfortable). Yet Shahin is able to turn this limitation into a haunting cinematic interplay by dividing his self into three different incarnations: one invisible (subjective point of view shots taken from the hospital gurney as Shahin is taken from his room, along mostly lonely hospital hallways, to the surgery room), one physical and real (objective shots of Shahin in bed interacting with hospital staff), and one spiritual (Shahin’s shadow appearing on his hospital room wall as he slowly gets up from bed and makes his way across the room to the window). 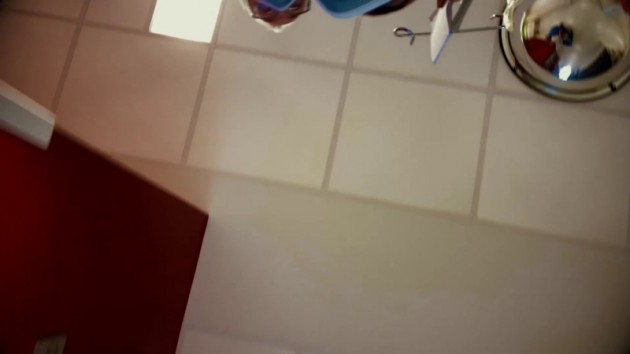 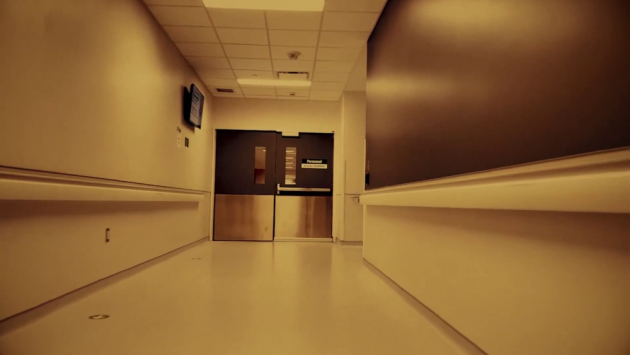 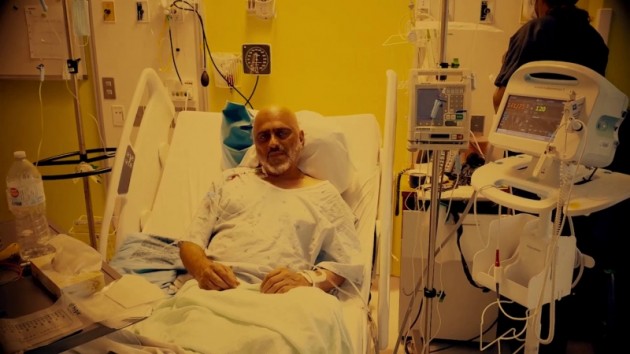 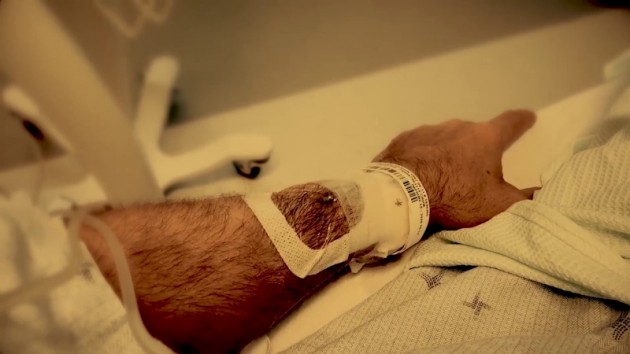 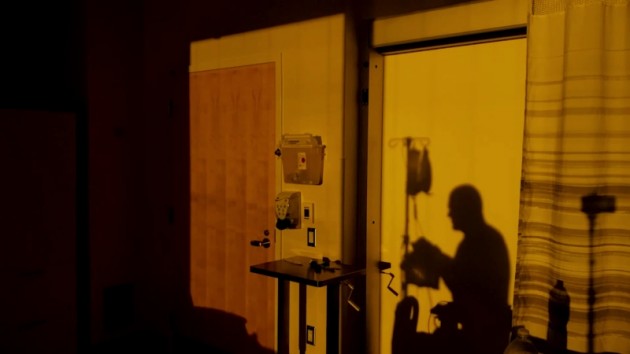 This latter ‘self’ is the last of Shahin that we will see (outside of the noted freeze frame which does not have the same ‘indexical’ weight as the live action footage). It is also the most haunting, almost ghostly in its magic hour golden light, rhythmically modulated by the constant beeping sounds of a medical monitor. The dark, silhouetted shot of the shadow invokes Plato’s famous allegory of the Cave. Are we watching the real or only the appearance of the real? Is Shahin’s death real? Maybe we will wake up and discover his death has been one long dream? The last image sees the camera looking out of the hospital room window, to the golden sun, set low in the sky overlooking the skyline from the South West end of Montreal’s “Super” CHUM Hospital. The sense of space is filled out by offscreen ambient music, the beeping monitor sounds and shuffling sounds which could be sounds made by Shahin. Although we don’t see him, Shahin’s presence is felt. He has joined the long list of artists and actors who have similarly stood by so many windows across his many films, looking at the real and the imagined.

Shahin talking about his love of alleys, on the set of Amnesia.

Every Angel is Terrifying Trailer