Sergio Martino’s All the Colors of the Dark

They're Coming to Get You

This is an Italian giallo which, with a dose of hermeneutic skill, can pass for a pseudo feminist tract against the stultifying life of the English housewife. As giallos go, it is a strange kettle of fish, since we are never really sure that there actually is an active killer (it could be all in the central character’s head), and there is no twist or revelation at the end. As per the giallo, there are plenty of secondary characters who may be conspiring with the killer, but this mystery part of the script is never developed. The direction is such that we never truly care who the killer is. In fact the plot is the farthest thing from whatever pleasures the film provides (bizarre visual touches, subversive subtext, some dynamic scope images and, of course, the presence of actress Edwige Fenech). The film begins with a flurry of images of a violent knife attack against a woman, with close-up of the killer’s green-blue eyes at the center of the scene. A woman wakes from a nightmare, the central character Jane, played by French-born actress of Italian-Maltese parents Edwige Fenech. Since she is the same actress seen in the nightmare it takes a while before we realize that the woman in the nightmare is actually her mother and her brutal murder the ‘primal’ scene which has left psychological scars on Jane. This becomes potential cause number one for Jane’s unstable state of mind. Cause number two, we soon learn from Jane’s uptight sister Barbara (Nieves Nevarro), is the car accident caused by Jane’s lover (George Hilton) that led to her miscarriage. The sister is none too subtle in placing the blame for the accident and miscarriage on the man. Cause number three may be the lime green vitamin juice her husband forces her to take. The tension between the sister and Jane’s lover grows in a later scene where the sister exposes her breasts to him as she changes in the bathroom (is there or was there something between them? Are they conspiring to make Jane crazy?). Strangely, Jane sometimes refers to the man as her husband, but the plot contains the hint that Jane has steadfastly resisted marrying him for some reason. One wonders if the ‘miscarriage’ plot point has anything to do with the fact that they conceived the baby out of wedlock? 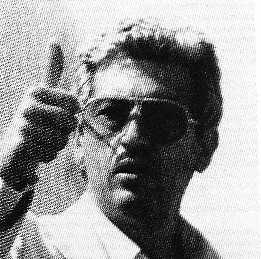 The man in the nightmare, Ivan Rassimov, appears like a ghost everywhere she goes as her trench-coated ‘silent’ stiletto wielding tormenter. Is he real, or just a figment of her troubled psyche? The mystery is resolved (or is it?) in the film’s uncomfortably curt last scene, in which Jane is taken back to the coven and seemingly knifed to death. Where most giallos end with the revelation of the killer(s), or the death of the killer, this one ends with the unsettling death of the central character, and her nightmare becoming lethal reality.

The other players in this odd female urban angst thriller include the noted sister, a blond-haired lesbian neighbor Mary (Marina Malfatti) who introduces her to a Satanist (cabalist) cult, the well meaning but distracted lover, the psychiatrist Burton (George Rigaud), and the members of the satanic cult. Jane meets Mary on the stairs to their flat and is invited (seduced?) into her apartment, even though Jane says she must go home to cook dinner for her ‘husband.’ The seductive, alluring stares from Mary leave little doubt as to what her thoughts are. Given that the film takes place in England, it is not surprising that, from an Italian’s standpoint, the ‘Englishness’ (few, if any, of the actors are actually English) is typified through the cuisine (and of course the frequent invitations for tea). When things get late Jane tells Mary that she must leave to cook dinner for her husband, and that she should probably cook some eggs instead of opening a can of tins as she “usually does!” The next scene begins with a close-up of two eggs and a sausage submerged in disgusting cooking oil. Opening a tin may have been healthier.

After a quaint stroll in the park, where Mary convinces Jane that the cure to her ills is not in medicine or psychiatry, Mary takes Jane to a gorgeous castle where she is introduced to a satanic cult group led by Peter O’Toole look-a-like Julian Ugarte and dozens of hooded members who encircle Jane like zombies. The leader initiates the evening with the sacrifice of a puppy. Jane drinks the puppy’s blood and then succumbs to passionate sex with the leader. The hedonistic pleasures of the satanic cult scene strike an uneasy blend of positive sexual/energy release and outright horror. For whatever its worth, this scene, with its tawdry wide angle aesthetics, low angles, and strange character behavior, is at least more unsettling and Dantean than the similar scene in Eyes Wide Shut (no doubt the budget for that scene alone is double that of this entire film)!

Whatever feminist tinge one may feel about this film comes in the shape of the underlying need to escape, or to “be free”, as Mary tells it, from her stultifying environment (she has no job, no friends, a husband who leaves for work at the drop of a hat, and no children). Though far removed from the shores of Italy, the film was made (1972) at the onset of the feminist movement, and more directly, feminist film theory and feminist cinema (documentary, avant-garde, the ‘theory’ film). The recourse to witchcraft and the supernatural as a means to escape domestic/patriarchal entrapment foreshadows George Romero’s much better, and more directed feminist horror, Jack’s Wife (aka Season of the Witch, 1973), and can be traced back to the British Burn, Witch, Burn (1962, aka Night of the Eagle-link). Of interest, 1972 also saw the release of Robert Altman’s pseudo-feminist, woman-going-crazy film, Images. Surrounded by her mundane existence, director Sergio Martino offers Jane all the standard ‘taboo’ forms of escape: lesbianism with the attractive and mysterious new neighbor Marie; drugs and wild, uninhibited sex with the cult group.

The narrative/plot revolves around Jane’s growing paranoia: the husband’s ‘green’ vitamins, the psychiatrists nice yet off-putting demeanor, the eerie old German couple Jane stays with when too frightened to stay alone, Mary’s awkward sexual advances, her sister’s coolness and her implied relationship with Jane’s lover, and, ultimately, Jane’s apparent murder of Mary at the Satanists, which ultimately foreshadows her own death by knifing (although Mary refers to the moment as her liberation). But, again shades of Eyes Wide Shut, did the latter murder actually occur? The film’s structure (if it can be called that!) recalls another horror film driven by a central female character: Rosemary’s Baby. All the Colors of the Dark recalls Rosemary’s Baby with the central tenement location, nosey neighbors, (apparently) well-meaning doctor, and cult group. Also borrowed from Rosemary’s Baby, Jane’s growing sense of paranoia seems to be objectively reaffirmed by scenes that show the other characters together, or characters appearing as another person/character (for example the cult leader appears near the end as the detective heading the murder investigations).

Fenech, who started dating Sergio’s producer brother Luciano after starring in Martino’s Lo Strano vizio della signorah Wardh in 1971, subsequently became a Martino regular. The French-Algerian born actress is asked to carry the film, as she is in nearly every shot, and does so as well as can be expected. The other ‘star’ of the film is the cinematographer Giancarlo Ferrando (who also filmed Martino’s other giallos Torso, 1973, and Tail of the Scorpio, 1971). Although the film is put together haphazardly, Martino and Ferrando make innovative use of the scope frame. For example, in the shot where they rack focus between a character in the right foreground and the mirror reflection of another character in the left background; in striking shot counter-shots with each character taking turns being in/out of focus, and an expressive mirror shot of Jane’s image fragmented four ways. Less effective are the contrived whip pans that attempt to capture the swaying movements of the killer’s knife swiping. Also of note, the film is co-written by giallo master Ernesto Gastaldi and Spanish writer Santiago Moncada. Oh, did I mention that the film was shot in “chillo-rama”!