The ‘apparent’ femme fatale extraordinaire Asia Argento, daughter of writer/director Dario Argento and actress/screenwriter Daria Nicolodi, has been making films since the ripe old age of nine (Sogni e Bisogni 1984). I question her bad girl status because her latest debut feature film Scarlet Diva is partly an artistic response to this image propagated by the Italian media. In the sense that this film demonstrates that Asia Argento is much more than a sexual provocateur. Also, as the only image we outside of Italy have of this remarkably talented actress/director/writer, it is all too easy to think of Asia as father Argento’s whipping girl, and forget that she has actually made far more Italian art and mainstream films than horror or giallo films. Asia has starred in three of her father’s films, Trauma (1993), (the underrated) The Stendhal Syndrome (1996), and (the awful) The Phantom of the Opera (1998). On top of these are small roles in two other horror films, The Church (1986) and Demons 2 (1988). That is five out of close to 30 films (including her non-Italian films). 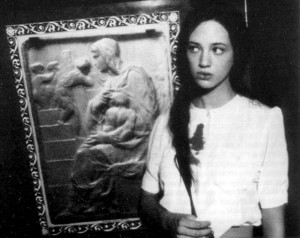 In full confrontation with this image, Scarlet Diva embraces the new digital technology like few films have. As it proudly states in the credits, the film was entirely shot, scored, and edited in digital (with the exhibition side of things lagging well behind production and post-production, it has been transferred to and projected in 35mm). The less cumbersome nature of digital shooting renders a wonderful sense of freedom and energy to this film, as Asia’s jet-set lifestyle sees her bouncing from city to city to attend press junkets, photo shoots, film festivals, acting auditions, and visits with distant friends. In less than two hours we get whirlwind visits to Rome, Paris, LA, New York, London, Milan, Naples, and Amsterdam. The film begins with a montage showing us the glamorous side of stardom, the awards, glossy magazine photos, fawning fans, and gushing media accolades, of one Anna Battista (Asia Argento). Scratch just a little below this surface, however, and you’ll find the darker side of stardom: drugs, animalistic, loveless sex, aggressive fans, cut throat agents, and sleazy, sexually abusive producers. Those who don’t have the skin to survive come out as lonely and emotionally tortured (Anna), self-destructive and self-loathing (Anna’s actress friend Veronica living in Paris), drugged out into mindless oblivion (the London-based Vogue photographers), or washed out, has-beens (Anna’s mother and the drug-addicted, alcoholic trailer park artist in Amsterdam). But with the world at her feet, the best Anna can say about herself is “I am the loneliest girl in the world” or “I’m a whore.” When Anna ribs her Los Angeles male friend for giving up his art to turn gay tricks, he throws Anna’s Godardian words back at her: “Didn’t you say that all artists are prostitutes?” Anna seems happiest when driving alone in her car singing along off-key with her car radio. 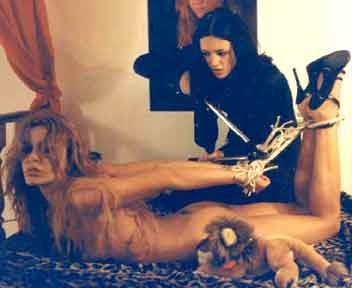 Anna finds her friend Veronica in somewhat of a …..bind.

But with all her goth/grunge trappings, Anna is a hopeless romantic at heart, falling madly in love with her male doppelganger, the tragically beautiful poster-boy lead singer of a Velvet Underground-like rock band, Kirk (the aptly named) Vaine (Jean Shepard). The proverbial ‘love-at-first-sight’ scene at the bar where Anna first meets Kirk is an example of how the film often slips into Anna’s hyper-emotionalized, romanticized subjectivity (a scene that is reminiscent of the moment in Jane Campion’s Holy Smoke when the Kate Winslet character ‘falls’ for the Indian guru). After their one night Anna discovers that Kirk is off to play a concert in Japan. Kirk gives Anna his silver pants and a photo of his ‘father’ as a keepsake (his real legacy is the child that we later learn they have just conceived). In keeping with the film’s dark comic turn on stardom and mythmaking, the person in the photo is Elvis Presley (given Shepard’s voice and his on-stage look and image, I would have pegged his father as Jim Morrison).

While decidedly modern in its style, Scarlet Diva presents an artistic world not far removed from Andy Warhol’s 1960’s The Factory. The music, the looks, the style, it is all there (all represented in actor Jean Shepard’s silver pants, long, jet black hair, and Lou Reed-like drones). The film’s disinterest in classical narrative structure, its thematic existentialism (Anna’s search for her artistic calling), and its foregrounding of a strong female character also recalls cinema’s high modernist period (late 1950’s-late 1960’s). But what sets Scarlet Diva apart from that form of cinematic high art, for better or worse, is its aura of (at times embarrassingly) narcissism and self-indulgence. At its worse it feels like an epic home movie; at its best, a courageous trip through a sinful Wonderland. One particular line of dialogue nicely summarises the film’s precarious balance between high modernist existentialism and film school self-indulgence, which leads to incredibly audacious lines like: “I have an oblique personality that is in direct proportion to what is wrong with me.” But Argento’s precocious talents keep this from slipping into the former for very long.

Anna Battista is a very thinly disguised cover for Asia herself. In interviews Asia has been forthright in saying that much of her own life is represented in her character’s, but in a general rather than specific sense. In other words, the events should not be taken to represent a carbon copy of her life. But there are parallels. Anna’s mother is played by Argento’s real life actress/screenwriter mother, Daria Nicolodi. When told she does not ‘look Italian’ she responds that her father’s mother was Brazilian, which is true of Dario Argento. When she auditions for a ludicrous Hollywood remake of Cleopatra, the director is played David Brandon, which is an homage to a similar role he played in Dario Argento protege Michele Soavi’s Stagefright 1987 (Asia Argento acted in Soavi’s The Church). In a flashback we see Anna’s young brother die as he is sideswiped by a speeding car. Asia Argento’s half-sister Anna (from Daria Nicolodi’s previous marriage) also died at a young age (in fact, one of Argento’s four tattoos is of Anna’s name). One also wonders: is the drug addicted, alcoholic Dutch has-been director living in trailer park misery a veiled reference to Dario Argento (Is Asia that cruel?)?

In fact Scarlet Diva reminds me of a cross between Fellini’s 8 1/2 and Juliet of the Spirits. Like 8 1/2, Anna is a frustrated ‘artist’ suffocated and typecast by her success as a popular actress. Here she craves to be a director, while the director from 8 1/2 makes popular science-fiction films but wants to make serious films. Like Mastroianni in 8 1/2, Argento is surrounded by parasitic industry types; both characters hold to ideals of love and beauty; both characters are conditioned (in the end for Anna) by Catholic guilt; and both films are meta-cinemas which present plots which are ostensibly about their own making. Like Juliet of the Spirits, Fellini’s female response to 8 1/2, Scarlet Diva is an emancipatory flight into female fantasy, although I would argue that Argento’s flight is far more liberating, braver, and more provocative. For pure emotive power as a reflection on stardom, beauty, and imagemaking, I would point out the scene where a fully nude Anna, perennial cigarette dangling from her mouth, shaves her armpits and applies makeup in her bathroom. The camera remains always behind Anna, capturing her (false) image in the mirror. In a stylistic change of pace, the scene favors longer takes over the quick cutting used throughout the film. Anna methodically applies her trademark dark eyeliner, eyelash, and ruby red rouge, transforming herself to a vamp. The ‘image’ changes once again as she begins to smear the makeup across her eyes and mouth, changing her expression from seductress to teary-eyed clown. In a matter of a few minutes, with no dialogue, Argento exposes the transitory illusion of the star image. 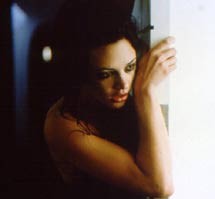 Like Holy Smoke, Scarlet Diva is ultimately a “grrrl power” movie, not in the sense of Campion’s feminist upturning of gender roles, but in Anna’s sheer determination to persevere at all costs. Months have passed between Anna and Kirk’s one night stand. Anna finds out that Kirk is playing at the same bar in Paris and decides to surprise him with news of their imminent baby. The surprise comes, but of a different variety. Anna has her fantasy shatter when Kirk’s road manager prohibits her from seeing Kirk because he is backstage with his “wife and daughter.” An emotionally distraught Anna hastily leaves the bar and begins to run aimlessly through the night streets. In high heels and skin tight dress, the very pregnant Anna is not exactly a glamorous sight. But just as her world comes crashing down, Anna experiences an epiphany. She stumbles on a flight of stairs and falls. Looking up to the top she sees a painting of the Virgin Madonna and Christ. The scene cuts repeatedly to closer shots of the image, until we make out the image of Anna as the Madonna. An interesting digital effect brings a life-like quiver to the candle-lit image. Next to the icon at the top of the stairs, out of a halo of fog and celestial light, appears the Christ-like silhouette of Kirk (after all, his name is ‘Jean [the] Shepard’). Anna’s fantasy mirage lover appears to her one last time.

Perhaps only in the movies does a pregnant woman drink, smoke, get into a bar fight, fall onto cement steps stomach first, and then have her doctor tell her that both she and her baby are “in perfect health!” But perhaps that is the point, that all we have seen is ‘only a movie’. That such ludicrous events and preposterous people can only exist in the extended family of the film world. After all, Scarlet Diva ‘ends’ with Anna at her computer working on a script called Scarlet Diva and typing “Fine”. P.S. Don’t leave before the incredible closing credits, which comprise of a split screen with the credits running down screen right and on the left, images from Argento’s book of childhood drawings and poetic scribbling, “I Love You Kirk,” published one year before the film, in 1999.