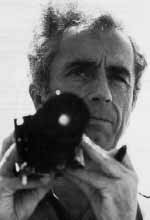 Red Desert is the final film of Antonioni’s “Alienation Tetralogy,” and one of the best films to depict the complex notion of neurosis and social illness. Monica Vitti (who appears in all four films) is extraordinary as Giuliana, a young married woman recovering from a nervous breakdown/suicide attempt and trying to adjust to “reality.” Richard Harris stars as Corrado, an engineer who is slightly more attuned to Giuliana’s emotional needs than her husband Ugo, but ultimately remains disconnected from her. Harris is one of a long line of foreign actors Antonioni uses as male leads alongside (mainly) Italian female leads (Steve Cochran/Il Grido, Alain Delon/L’Eclisse, David Hemmings/Blow-Up, Rod Taylor/Zabrinske Point, Jack Nicholson/The Passenger, John Malkovich/Beyond the Clouds).

Antonioni has said that he prefers women in lead roles because they are more sensitive to the nuances of reality. In the film’s context, this raises the question of what or who is sick. Is Giuliana mentally unstable or is she just a lost soul too sensitive for the world she lives in because she is unable to adjust to the technologized world (as she herself says, part of her problem is in trying to love everything)? One might see the world around her as alienating and callous. Or you might see it, as Antonioni probably intended, as a world (for better or worse) adapted to the industrial technoscape (her son Valerio who gleefully plays with his scientific toys and runs happily around the factory’s lifeless surroundings, her husband who is plant manager, etc.). Is she the sane one in an increasingly “frigid” world? In some respects, this appears the case. Perhaps Giuliana represents the natural past and is a microcosm of all the ills left in a society in transition from an “enchanted” to “disenchanted” world (nature no longer an equal partner). This explains the vivid fable she recounts to her son, which, not incidentally, is the only scene sporting natural colors. This fantasy she recounts to her son can also be seen as a romantic view of reality that indicates just how distanced Giuliana is from the cold scientific facts of modernity. In every respect Giuliana’s fantasy space is directly opposite to the real world, right down to the pink desert, the open spaces, the clear water, and the human-shaped rocks. This environmental and ecological discourse concerning technological adaptation makes Red Desert a film well ahead of its time.

This is Antonioni’s first color film and it is used, like the electronic music, to expressionistically reflect Guiliana’s neurotic state. Like Andrei Tarkovsky, Antonioni deploys the exterior landscape as a set, with the color controlled before shooting as opposed to later in the laboratory. Antonioni believes strongly in color psychology. As he said in an interview with Godard:

The interior of the factory seen in the film was painted red: two weeks later the workers were fighting amongst one another. It was repainted in pale green and everyone was peaceful.

The enhanced and/or distorted color scheme is how Giuliana sees reality around her. Or at other times simply an expression of a scene’s central emotion. For example, the walls of the room where the “orgy” takes place are painted red (passion, primal sexuality and carnality). Corrado’s hotel corridor, where the disturbed Giuliana goes to for help, is the bleach white color of an institution. If attentive, you will notice that a few shots (from Giuliana’s pov) are nearly colorless, and in other shots rooms and objects subtly change color. For a full appreciation of this film’s “painterly” qualities, I urge you to read Angela Dalle Vacche’s piece “Michelangelo Antonioni’s Red Desert: Painting as Ventriloquism and Color as Movement” in Cinema and Painting, Austin: University of Texas Press, 1996, pp. 43-80.

Red Desert contains stylistic continuities from the previous films in this tetralogy, such as the displaced “witness” point-of-view, with the camera slightly behind a character’s head; the symbolic use of landscape-as-state-of-soul; images of characters trapped in the frame; and the representation of a “sick Eros” (wonderfully captured in the orgy-cabin scene where nature (animals) is reduced to human aphrodisiac). However, Red Desert signals in many respects a stylistic change for Antonioni. Apart from the obvious first-time use of color, Red Desert marks the first time Antonioni filmed scenes with more than one camera. More importantly, this film signalled Antonioni’s move away from the wide angle aesthetic of L’Aventurra, La Notte, and L’Eclisse, to a telephoto lens aesthetic. The long lens gives Antonioni another tool with which to isolate and trap characters within the frame/world. Hence the frequent cuts to objects in short focal length that signify Giuliana’s isolation and her displaced attentiveness on objects separate from herself. Camera movement in Red Desert begins to foreshadow his later more frequent use of autonomous camera movements (camera movements apart from character movement or narrative import). While at the aural level, Antonioni begins to employ electronic music as an soundscape equivalent to the visual iconography. (Likewise, Andrei Tarkovsky, a director who owes a considerable debt of influence to the Italian maestro, would begin to incorporate electronic music in 1972 with Solaris.)

There is one scene that contains most of these stylistic and thematic elements: the scene toward the end where a distraught Giuliana visits Corrado at his hotel room for emotional help. All the following appear in this scene: color & electronic music used to signal Giuliana’s neurosis; objects as barriers to emotional connection and surrogates of displaced emotions; a telephoto lens aesthetics; “witness” POV shots; De Chiricoesque landscapes/mindscapes; characters “trapped” in the frame; and the continuation of “sick Eros.”

The ‘orgy’ scene is also one of the film’s central setpieces, and demonstrates how Antonioni uses editing, alongside color, to fragment and abstract space in a manner reflecting Giuliana’s fractured state of mind. Toward the end of the scene, once the huge ship has entered the dock just outside the hut, there are two occasions where Giuliana appears to magically displace herself across the room through cuts that feature continuous time on the one hand but discontinuous space on the other. Emilia begins to insult Linda’s husband Max, “I hate him.” “Who?” “Your husband, because he is always there, like a vulture, ready to pounce on a bankrupt factory or a woman.” During this exchange we see Giuliana seated with her back to us. On the far right side of the frame we catch a glimpse of Giuliana beginning to rise, and in the next shot see her standing with her back to the camera. This occurs much more dramatically in the next exchange. When Corrado (Richard Harris) sees the ship he comes up with the cost saving idea of using it to transport the factory equipment he has bought from Ugo’s factory for Patagonia rather than sending them first to Genoa or Naples. As we hear him offscreen talking to Ugo about his idea Giuliana sits down in front of a wooden stove and moves her right hand to pick up a glass from the table. This is followed by a straight cut to the back of Corrado as his conversation with Ugo continues, only know Giuliana is standing next to Ugo in the background of the shot. The continuous dialogue tells us that time is continuous, but Giuliana’s sudden appearance disrupts the reality of the scenic space. A few shots later Giuliana is looking out of the window and says, “It [the sea] never keeps still, never.” She mighty as well be talking about herself, as she slithers from space to space, corner to corner throughout the film, rarely keeping still. Her sudden, illogical physical displacement in this scene is suggestive of how disassociated she feels from the world around her. In this scene detached from the sexual games played by her husband’s bourgeois friends, from her husband’s business world, and from the industrial factory complex that represents modern Italy.

Progress is inevitable, and while some adapt (like her son Valerio, or the men around her), others, like Giuliana, do not. Antonioni is not against progress, he just seems to have great empathy for those it leaves behind: “I am in favor of progress, and yet I realize that because of the disruption it brings, it also causes trouble. But that is modern life, and the future is already knocking at our door.” Antonioni has often said how, in fact, his point was to show the beauty of technological landscapes. In an interview with Jean-Luc Godard in 1963 he said, “My intention …was to translate the beauty of this world, in which even the factories and their smoke-stacks can be very beautiful….The line, the curves of factories and their smoke-stacks, are perhaps more beautiful than a row of trees….(quoted from Interviews With Film Directors, ed. Andrew Sarris, New York: Avon Books, 1967, p. 23). This is evident in the film’s opening scene, which are staggering in their plastic beauty, the way the billowing factory smoke fills the space outside the factory and then, as if perfectly natural, rises to join the clouds in the sky. In the film’s final scene, the young son Valerio asks Giuliana whether the poisonous yellow smog hovering above Daddy’s factory will kill the birds as they fly by. Giuliana assures him that by now they know about the fog and won’t go through it. The birds have adapted to their changing environment. Has Giuliana done the same? The mother and son exit the frame, and the camera rests on Ravenna’s urban landscape. The image is in focus (unlike in the opening) and quite beautiful in its own way. Has Giuliana finally adapted? Is she cured? In many respects Red Desert is about perception, and seeing reality anew with fresh eyes. At a point in the film Giuliana asks Corrado, “What should I do with my eyes, what should I look at?” Perhaps she has gained the insight necessary to ‘see’ and accept the modern world around her, as the birds have, and avoid the ‘sick’ yellow smog.

Fox Lorber’s transfer, properly letterboxed at 1:85, is for the most part acceptable, especially considering how tricky Antonioni’s unorthodox color schema must have been to transfer to home viewing format. The film could have stood a digital cleanup. This shows most in scenes where Antonioni employs soft focus and/or heavy fog, and at reel changes, where dirt and scratches are most prevelant.