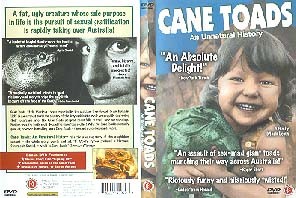 In my review of Forgotten Silver, I discuss the peculiar hybrid genre known as the mockumentary, where an authentic formal and stylistic documentary representation masks a wholly fictional subject matter. The subject of Cane Toads is so bizarre, and the reaction of the people interviewed so emotionally polarized, that it feels like a mockumentary. On the broad scope of things, Cane Toads tells the cautionary tale of what can happen when nature is tampered with. In this case, when an alien ‘natural’ factor (the cane toad) is placed into a new environment. In the 1930’s sugar, one of Australia’s major exports, was being jeoporadised by a cane-eating beetle (cane grub). Based on the findings of entomologist Raquel Dexter at a conference in Puerto Rico in 1932, the Australian authorities decided that the cane toad (Bufo Marinus) could be an effectively controlled biological measure to curb the cane grub. The can toads eat beetles. Introduce them into the sugar canes and they will eat the cane grub. Or so the theory went. Throughout this documentary director Mark Lewis counterpoints the straight ahead voice-over delivery of information with overly dramatised images. For example, while the voice-over gives us the above facts we see the camera perched at ground level with a white government building in the extreme background. Moments into the shot a large toad leaps into the foreground of the frame. An image which recalls such science-fiction/horror nature gone amok films as Frogs (1972), The Night of the Lepus (1972), or Them (1954). Hence humor is introduced by the juxtaposition between the seriousness of the written text and offbeat visual touches that exaggerate the consequences of the facts.

On the 22nd of June 1935, 102 cane toads were shipped from Hawaii to Gordonvale on a two-week trip. Over this section we hear a catchy blues tune sung by Tim Finn (“Cane toads a coming, can toads a coming….”), which again undercuts the text. Given the alarmingly high birth rate of the cane toad, with one female toad able to lay upwards of 40,000 eggs a summer, there would be more than enough toads to handle the cane grub. But the experiment goes seriously wrong when the farmers learn that, for a variety of reasons, the toads do not eat the cane grub: “The toads began to invade. They spread everywhere; they ate everything, everything, that is, except the cane grub and beetles.” By 1945 the farmers introduced a pesticide that proved effective against the cane grub, but the cane toads remained. Cane Toads concentrates on the varied human responses to this experiment gone wrong, responses that range from the toad as a despicable nemesis to be killed at every chance, to the toad as a cuddly pet. It is this contrasting range of human emotional reaction to the cane toad, along with the use of incongruous images/music, which makes this one of the funniest documentaries you are likely to see.

The documentary educates us about the cane toad mating habits, eating habits, and biological/physiological makeup, all of which Lewis milks for its humorous potential. For example, we are informed about “amplexus,” which describes the mating procedure where the male toad clasps itself onto the back of the female. Later we hear from a scholarly text entitled “An Unusual Act of Amplexus in Bufo Marinus” which explains the surreal image of a toad which has remained engaged in amplexus with a roadkill toad for several hours in the middle of a highway road. Similar shifts occur throughout the film, where Lewis introduces a serious historical fact then undercuts it with the stylistic visual re-presentation of the fact or human responses. For example, while we are told of the toad invasion of the Australian natural environment Lewis stages a Psycho-like shower scene with toad point of view shots. After learning that the toad contains a toxic liquid under its skin and can eject the toxin up to a meter, Lewis playfully crosscuts between a young boy laughing and playing with a cane toad in a suburban backyard and the mother inside the kitchen on the telephone. One zoologist with a particular hatred for the cane toad tells us in an angered, impassioned voice about the great pain he felt when he was sprayed in the eye by the toad’s poisonous toxin, and the emotional loss of his beloved cat to the same toxin. Then Lewis cuts to a silhouetted shot of a man talking about his use of the toxin as a mind altering opium-like drug (becoming ‘one’ with the consciousness of the toad). One man’s poison is another man’s….

Seemingly ludicrous juxtapositions such as this is what makes Cane Toads so funny, and what gives it the feel of a mockumentary. The latter is also achieved by the way Lewis parodies the documentary style. For example, every time someone officious is being interviewed (zoologist, police detective, city councilor, and President of the ‘Aquarium Society’) the camera is framed tightly on the person in the conventional talking head form, the art direction is minimal or tacky (as in the high-school like fish poster hanging above the President of the North Queensland Aquarium Society), and we hear the same canned offscreen sounds of telephones ringing, typewriter keys being banged, etc. ). Lewis, who has become somewhat of an ‘animal auteur’ (The Natural History of the Chicken, 2000, Animalicious, 1999, Rat, 1998, and The Wonderful World of Dogs, 1990), never lets us forget that humour is, ultimately, human, by counterpointing the extreme range of human reaction to the cane toads. For example, a city councilor named Max Ackland (his name, if fictitious, perhaps a play on the New Zealand city Auckland) wants to commemorate the toad with a statue and exploit the toad situation as a tourist attraction. Lewis then cuts to an irascible farmer who reacts to the councilor’s proposal with the following terse words: “Surely this bastard can not be in his right frame of mind.” This balance between economic profiteering and ethical-based opposition reflects the same struggle between the resort town mayor and the police/ichthyologist in Jaws. Lewis again plays off the horror film by ending with the classic scene of the contagion about to spread to the big city, with a ground-level shot following the cane toad as it hops along the highway (Zombies, Parasite Murders, and Rabid being three horror film examples).

I was so unsure about the veracity of this film that I did some research and discovered that, indeed, the events described in Cane Toads did actually happen. However, I am still not convinced that all of the interviews are pure and unadulterated. But Cane Toads still proves the old adage that reality can sometimes be stranger (and funnier) than fiction.

The DVD includes a diverting and modestly entertaining New Zealand short film written and directed by Robert Sarkies entitled Signing Off. The film follows the escalating absurdity of a radio show host delivering his last show and determined to honor a musical promise to an elderly and loyal listener. The film begins in a realist mold, with a crass radio head informing the host that his old-time music show is no longer viable within recent ‘market studies.’ He is ordered not to take any requests on his final show, which only makes him more deviant and determined to honor the wishes of a little old lady who looks like she walked straight out of an Ealing Studio comedy (we even see a photo of Sir Alec Guinness on her wall). As the roadblocks escalate, the film becomes increasingly absurd and unbelievable, while maintaining the quaint Ealing Studio-like comic conflict between tradition and change.