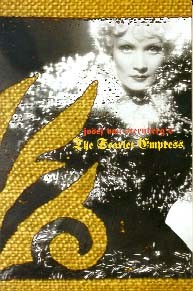 Josef von Sternberg once said that he would not mind if his films were projected upside down, so much was his contempt for ‘conventional’ Hollywood storytelling. The Scarlet Empress, his sixth and penultimate teaming with his sinful alter ego Marlene Dietrich, is perhaps the most audaciously perverse film to have ever come out of a major Hollywood studio (Paramount in this case). One can surely find a stranger or weirder film in the bowels of marginalized film productions of the time (independent studios, one-shots, poverty row studios, etc.), but would be hard pressed to come up with a challenger from the top ranking studios. Granted that Paramount was always more willing than other studios to forego ‘kulture’ for the sake of idiosyncratic visions. As evidenced by the string of ‘anarchistic’ comedies they produced in the early thirties (W.C. Fields, the Marx Brothers, Mae West, Bob Hope and Bing Crosby, Wheeler and Woolsey). The Scarlet Empress, ‘based’ on the diaries of Catherine the Great, is Sternberg’s version of 18th century Russia, much like his reconstructions of other far away exotic locations (Morocco, Shanghai, the Japanese island Anatahan, Macao). In other words, if you are looking for history with a capital H, look elsewhere. This is pure historical fantasy, with Sternberg’s thematic obsessions (sex-as-power, sadism/masochism, reason vs. emotion) and painterly qualities holding rein over historical accuracy (although there are at least four innuendo references to horses that refer to Catherine the Great’s apparent ‘taste’ for horses and her reputed death under the weight of a horse). The production may tell us that we are in 18th century Russia, but everything from Sternberg’s mixing of art design styles (Byzantine, Rococo, Expressionist) to the fluctuations in acting style tell us otherwise. For example, some of the minor characters attempt to speak (albeit with American accents) in a pre-20th century argot, but Louise Dresser’s snappy delivery as the tempestuous Empress Elizabeth is more fitting of a 1930’s screwball comedy. In fact, the varying acting styles is one of the purest joys of this film. From Dietrich’s wide-eyed innocence as the young Sophia, to her crazed gaze in the concluding shots, the heavy sexualized breathing patterns of Dietrich and Ruthelma Stevens as Countess Elizabeth, Sam Jaffe’s over the top lunatic Peter the Grand Duke who, with his wide-eyed/mouthed expression and golden locks would not look out of place next to Chico and Groucho, and John Lodge’s admirably wooden performance as Count Alexei. 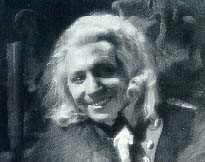 Sternberg subtly projects on off-kilter world right from the beginning of the film. A close examination of the young Sophia’s position in her bed, awkwardly twisted to face the family doctor and with a hand so awkwardly positioned underneath her head that it can not possibly be her own, is a visual indication of the bizarre ‘Great Destiny’ which awaits her. A destiny which even as a young child she envisions, when she not so innocently asks “What is a hangman…can I ever become a hangman?” and we are treated to a child’s-eyed (we assume) montage view of the torturous travails of a court executioner. This striking montage includes lateral tracking shots of the executioner placing victims on a chopping block and then retreating in reverse as he decapitates them one by one, images of nude women burning at the stake, and being taken out of an Iron Curtain. The fleeting images we see of the nude women burning at the stakes, arms tied above their heads, sweating profusely, are as sexually charged as any image of the period. The imagery throughout this montage, which links sexuality to violence, foreshadows Catherine’s eventual rise to the throne. As does the wonderful dissolve from the end of this montage, a huge close-up of a bell with a man as a human bell clapper, to the graphically matched image of Sophia’s openly splayed dress as she plays on the swings. It is amazing to know that this scene (and the whole film) passed through the Production Code. Apparently the film was completed just prior to the enforcement of the Production Code (1933/34) and somehow managed to pass with their seal of approval.

Rather than the conventional linear cause and effect manner of telling a story, Sternberg advances the narrative through moments and scenes that echo and mirror each other, achieving a rhyming doubling effect. For example, soon after the film introduces Dietrich as the young Sophia, we see her prancing down the stairs to meet the Count Alexei, with the camera craning down to follow. This wide-eyed, child-like naivete is contrasted to the final scene, where Dietrich as the power hungry Catherine the Great rides a horse up the stairs to assume her position on the throne (and with her mad grin and jerky head movements takes on the physical characteristics of the Sam Jaffe’s mad Grand Duke). Another key doubling effect comes in the two nearly identical bed chamber scenes. Catherine repeats moment by moment, gesture by gesture, the scene where the Empress Elizabeth tells her to blow out all the candles in her room and go through a secret passageway to tell the man in waiting he can enter her bedroom. The man of course is Count Alexei, the man Catherine has fallen in love with. The scene, filmed in stark, ominous shadows, becomes the defining moment for Catherine, where she loses any dreams of idealistic love she may have still harbored, and gleefully accepts her ‘great destiny.’ The moment, which Freud would call the ‘primal scene,’ is repeated with Catherine in the position of Elizabeth, and Count Alexei in her former role of humiliated subject. The transition becomes complete in the next scene, a stunningly photographed, highly stylized setpiece where Catherine first uses the sexuality she will exploit to attain political power by seducing the head of night patrol, Lieutenant Dimitri (Gerald Fielding). The scene begins with Catherine tossing a locket containing a photograph of Alexei out her bedroom window onto the front yard of the estate grounds (as a student pointed out in my class, a photograph in 18th century Russia is quite the jarring effect!). This cuts to five close-up shots of the locket falling through a tree, with the overall effect attaining a timeless quality in the way the seasons seem to change through the state of the tree. Catherine continues out into the front yard in search of the locket, with the camera tracking from behind a baroque, twisted white tree which stands in stark contrast to the pools of darkness. Throughout this scene Dietrich is filmed in silhouette, the only such time, to suggest the dark side of her nature which is soon to take over her being. 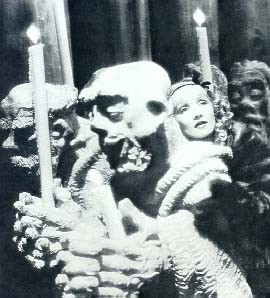 Marlene Dietrich Amid the Tortured Scenery

Sternberg’s disdain for conventional narrative extends to the soundtrack. Many key scenes are played without any dialogue, including one stretch of nearly ten minutes (the wedding scene and the banquet scene, with a brief scene of her bed being blessed), and the concluding scenes leading to the ascension of Catherine to the throne (murder of the Grand Duke, montage of the populace rebelling, shots of horses riding into the castle up to the throne).

Criterion’s presentation of this film on DVD is as handsome as anything they have done, or, up to their usual standards. The image quality of the new digital transfer is stunning. The film is segmented into 19 chapter breaks and bonus material includes production stills and lobby cards and a 20 minute documentary taken from a 1967 BBC broadcast called The World of Josef von Sternberg. The documentary was filmed during Sternberg’s appearance in London to promote the release of his autobiography, Fun in a Chinese Laundry. The documentary alternates between Sternberg fielding questions from a very young Kevin Brownlow, mainly on his visual style, and footage of Sternberg demonstrating a lighting set-up to some young, eager film students. The latter is quite funny, as we are treated to glimpses of Sternberg’s apparent autocratic demeanor, as he crassly blurts out orders on where to put the lights, position reflecting panels, etc. Whether this is Sternberg, or Sternberg playing ‘Sternberg’ is hard to tell, but it is fun nonetheless. The female model that is being lit, attractive and photogenic, seems overwhelmed by it all, and she never utters a word. I have no doubt that, since then, the woman has raised a few eyebrows by casually mentioning that she shares something with Marlene Dietrich: they were both photographed by Josef von Sternberg! The inside package comes with a full color double-sided six page fold-out sleeve which includes an insightful, scholarly account of the film from Robin Wood, and an acerbic, personal ‘defense’ of Sternberg from famed American experimental filmmaker Jack Smith, “Belated Appreciation of VS,” which first appeared in Film Culture #31, Winter 1963-64. The only blemish is the sound recording level, which, at least on my monitor/speaker system, would periodically fluctuate from scene to scene. Which meant that I had to keep the remote volume control handy to lower and raise the volume throughout the film. There was also one line of dialogue which neither myself nor the person watching with me were able to make out, even after listening to it over and over. It comes at 27’10”, right after the Countess in charge of the Grand Duke’s entertainment returns to pick up some toy soldiers the Duke left behind. As it turned out, I was teaching the film a few days later and saw a decent 16mm print of the film, in which the line came through clearly. To save anyone else from the possible frustration, the hard to make-out line from Count Alexei is: “She’s always picking up the Grand Duke’s soldiers, which I’m beginning to suspect he leaves intentionally” (a fittingly cryptic line!).