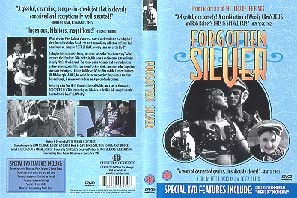 A relatively new breed of film comedy hybrid has emerged in the past 20 or so years, the ‘mockumentary.’ It is only natural that The National Film Board of Canada (NFB) pioneered this genre with two wickedly funny satirical shorts, The Bronswick Affair (1978, Robert Awad) and The National Scream (1980 Robert Awad, David Verrall, for more information I refer the reader to my piece on Robert Awad in Guide to the Cinema(s) of Canada, ed. Peter Harry Rist, Westport: Greenwood Press, 2001). A few years later Woody Allen gave this genre its first feature length masterpiece with Zelig (1983). Then followed This is Spinal Tap (1984, Rob Reiner) and most recently Christopher Guest’s wry diptych Waiting for Guffman (1997) and Best in Show (2000), the latter being, in my opinion, one of the best American comedies of recent years. Peter Jackson adds his immeasurable talents to the genre with Forgotten Silver, produced for New Zealand television in 1995 and recently released on DVD by First Run Features. This wonderful hour-long “mockumentary” recounts the discovery of forgotten New Zealand film pioneer, Colin McKenzie. What separates Jackson’s mockumentary from the others is that Jackson disguises the ‘mock’ from the documentary. Jackson’s clever and subtle manipulation of the historical documentary form (archival footage, interviews with experts, etc.) is so convincing that the film fooled some people into believing its veracity. This recalls the first and perhaps still greatest mockumentary event, Orson Welles’ Mercury Theatre on the Air radio production of War of the Worlds, which ‘interrupted’ the regular broadcast to report that the United States of America had been invaded by Mars. People who tuned into the show late, missing the opening, believed that little green men were attacking their nation. Panic ensued and within minutes, to quote Welles, “the switchboards in radio stations right across the country were lighting up like Christmas tress” (This is Orson Welles, Orson Welles and Peter Bogdanovich, 1992, HarperCollins, p. 18). Believing in Forgotten Silver, even granting the perfect execution, is no less amazing. As Cotes says in his commentary, “we wanted to start off slowly and build up to a crescendo of lies.” Which only goes to show, as Welles found out first, that you can never overestimate just how far you can pull a person’s leg. Both events also demonstrate that people generally do not like having the wool pulled over they eyes. People were so upset with Welles that he had to make a public radio apology. On the documentary included on the DVD we hear voice-over readings of letters written by irate people. Some, however, only dug their hole deeper. Like some New Zealand film teachers who, Peter Jackson tells us, upon hearing of the film told their students that they ‘knew’ about Colin McKenzie!

Peter Jackson, who acts in the film as himself, is asked to examine some film cans found in a garden shed, a discovery which changes the course of early film history. McKenzie’s (luckily well-preserved) 35mm footage, dating from 1900 on, reveals technical and formal qualities which place him in the company of early film pioneers the Lumière Brothers, Edison, Porter, August Le Prince, and others. Photos and test films, all shot by Jackson in an early film style, present the facts. McKenzie’s first camera, built out of bicycle parts, produces hilarious footage taken from the point of view of a moving bicycle (a “footcranked” camera!). The family farm tractor is used to steam drive the projector. McKenzie uses egg albumin and boiled flax to make his own film stock (needing 2000 of his father’s farm eggs to complete a feature film). Parts of a Tahitian plant is used to make the first colored film stock. And so on. The discovery also changes the course of aerial history. In footage taken by McKenzie of a successful airplane flight by New Zealander Richard Pierce (an real historical person), Jackson digitally enhances the back pocket of an extra to reveal a newspaper dated months before the Wright brothers flight!

Forgotten Silver has the air of authenticity partly because it uses empiricist strategies of recording history which we have all encountered: “found” facts (lost film), woven into a linear narrative propelled by the perseverance and genius of outstanding individuals (Colin McKenzie). The “history” makes for engaging narrative, right down to the dramatic footage of McKenzie filming his own death as a (Spanish Civil War) wartime cameraman (the canted angle produced by the fallen camera may have been influenced by a similar shot at the end of Wim Wenders’ The State of Things (1982). Forgotten Silver is very much a film about how film history is recorded. As playful as the film’s events are, however, they have parallels in “real” film history. McKenzie’s first moving bicycle shot echoes the “first” moving gondola shot in the 1897 Lumière film La grand canal a Venise. McKenzie’s historical epic Salome is modeled after Griffith’s Intolerance. The one-gag comedian McKenzie teams up with as his ‘meal ticket’, Stan the Man, is a cross between Larry Semon and any Mack Sennett regular (although on the documentary we learn that he was based on early New Zealand film comedies called ‘community comedies’ that featured off-the-cuff footage of town locals). And McKenzie’s strange disappearance recalls mysterious disappearance of the French film pioneer August Le Prince. The film loses steam near the end when the fully restored “Salome” is screened at a gala premiere. Watching lengthy footage of “Salome” halts the film’s steadfast pace, and the footage itself is less effective as a recreation of the period. A minor complaint for a film which shares the same excitement toward early film history that recent film historians have had, and demonstrates that history can, indeed, be fun.

Both the commentary track by co-director/writer Costa Botes and the making of documentary add interesting tidbits of information, both of the anecdotal and more substantial variety (related to production history, visual style, casting, etc.). For example we learn, from many perspectives, on how the silent film visuals were authentically replicated. My one complaint with the commentary track is with the sound level of the original soundtrack, which is mixed too high and therefore makes it difficult at times to make out what Botes is saying. There is also a major gaff Botes makes which goes undetected. When talking over the footage where McKenzie the wartime camera operator dies ‘on camera,’ Botes states that they were influenced by an authentic wartime documentary entitled The Battle of Chili, in which a camera operator was indeed killed in the line of duty. In fact the film he is referring to is John Huston’s wartime classic, The Battle of San Pietro.

Forgotten Silver demonstrates that Jackson is one of contemporary cinema’s most talented and eclectic directors. In the late 1980’s/early 1990’s Jackson revolutionised horror comedy with the loose trilogy Bad Taste (1988), Meet the Feebles (1989) and Braindead [aka Dead Alive, 1992].(“You’re Mother Ate My Dog! Peter Jackson and Gore-Comedy”) He followed that with the irreverent, stylish, and emotionally pulverising indie classic Heavenly Creatures (1994), and then showed that he can also work at a more mainstream level with the US/New Zealand co-production The Frighteners (1996). Presently, Jackson sits on the cusp on Big-Buckdom with his soon-to-be-released adaptation of the “Lord of the Ring” trilogy. As much as I fear big-budget remakes of classics, one only hopes that some time in the future Jackson returns to his one-time pet project: remaking King Kong. The idea of remaking this revered classic sends shudders up the spine of purists. But if the film is going to get done, there is no one I would trust more with the project than Peter Jackson.