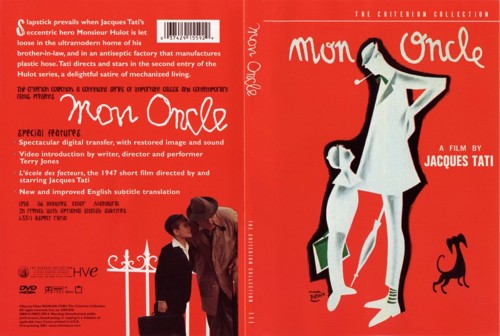 Mon Oncle marks the second screen appearance of Tati’s comic creation, Monsieur Hulot (Le vacances du M. Hulot 1953 being the first). Tati the director contrasts (tradition) M. Hulot, single, unemployed and living in a quaint, slow-paced French quarter with (modernity) the Arpel family, Hulot’s sister, her husband and their young son, Gerald, who live in the newest section of town. Monsieur Arpel owns a successful industrial factory called “Plastac” (which produces just what its title suggests), while Madame Arpel contents herself by running the household like a domestic drill sergeant. You’re as likely to find a speck of dust in the Arpel home as you are to find a natural sound in the factory. The Arpel’s live on the cutting edge of modernity. Only dogs seem unaffected by the imposition of modernity’s rhythms. M. Hulot, on the other hand, lives somewhere in the 19th century. M. Hulot’s life intersects with the Arpel’s through the nephew Gerald, with whom he gets along wonderfully, and the job he is given at the “Plastac” factory. Hulot’s kinship with young Gerald leads to jealousy on M. Arpel’s part, but in the end serves as the impetus for a new found bond between father and son (interestingly, this father-son bond is symbolised, as in the end of Bicycle Thieves (1948), by a joining of hands). 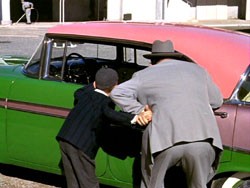 Though Mon Oncle is set in the present, the apparent temporal discrepancy between the Hulot and the Arpel lifestyle gives the film a pseudo science-fiction feel, and the film could be seen within the tradition of satirical dystopias (A nous la liberté, Modern Times). However, Tati’s satire is never scornful. Like with Renoir, there are no villains in Tati’s humanist world. No matter how silly the Arpel’s are, there is still space for sympathy. Even technology is saved from direct attack because Tati’s humor derives mainly from humanity’s inability to adapt to its own technology, rather than the technology itself (though technological design is an important part of Tati’s comedy, such as the foolishly over-efficient appliances in the Arpel home). 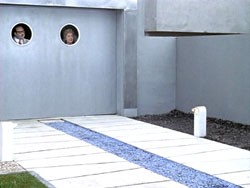 Tati shares a unique affinity with the early silent comedians, especially Buster Keaton, though there are as many differences as similarities between them. He uses a wide-angle aesthetic with mainly static framing in long shot or extreme long shot scale and a highly controlled conception of the frame (more so than even Keaton). He composes in depth and at the borders of the frame. Gags occur simultaneously throughout the frame, making it virtually impossible for all the gags to be absorbed in one viewing. Like Keaton’s, Tati’s gags often develop elliptically across scenes so that we must revert back to memory to perceive the gag extension. What most separates Tati from silent comedy is his unique, comic use of sound (you could add his expressive use of colour). Critics often point to Tati’s minimal use of dialogue as a throwback to silent comedy. This is only partly true. Though he does not use dialogue in the conventional way (or to tell jokes as silent comedy did through intertitles), the human voice becomes another sound effect to manipulate within the visual/aural cacophony.

Tati’s comic philosophy comes from his experience of observing people and daily life, which gives his humor a quasi-ethnographic quality. It is perhaps because of Tati’s own acute powers of observation that his style demands equal observational skills from the audience. His style is perhaps the most literal application of Bazin’s realist film theory, most notably Bazin’s notion of a “democratic” mise-en-scène that allows the viewer freedom to scan the image (of Tati’s Playtime 1971, Noel Burch said that it is a film one not only has to see more than once but from different positions in the theatre!). Though Mon Oncle does not take the notion of ‘democratic mise en scene’ as far as Playtime, one still benefits from seeing the film on DVD, with the ability to pause or rewind. With this in mind, we can ask, did Tati take this Bazinian notion of a democratic mise-en-scène too far for a pre-home video audience? 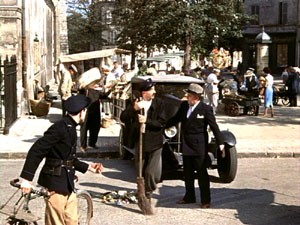 Another important touchstone to Tati’s comic philosophy and style is the French philosopher Henri Bergson’s theories on comedy expressed in his classic monogram, Laughter (1900). Bergson’s writing was a reaction to the dehumanising tendencies in the late 19th century, early 20th century (what he called the “mechanisation of thought”). One of his central comic images is “the mechanical encrusted upon the living” as a basis or leitmotif that veers off in several directions to encompass human behaviour, actions, situations and social customs. For example, an awkward piece of clothing is restrictive to the body as a formal dinner is to social behaviour. So when someone acts, behaves or gives the impression of “the mechanical encrusted upon the living”, they provoke laughter in those around them. According to Bergson comedy serves a social function. We laugh when someone acts inappropriately (i.e. mechanically), and in our laughter is an attempt to suppress non-conformity and unproductive behaviour, making Bergson’s theory (as some have argued) a conservative reaffirmation of the social status quo. Our laughter becomes a social gest that corrects unproductive behaviour (i.e. absentmindedness, repetitive action). 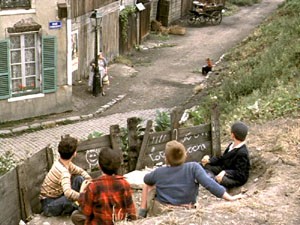 In relation to Tati, we can think whether instances of “the mechanical encrusted upon the living” also have an ideological function (is Tati’s humor also a “social corrective gest”?). The year of the film’s release, 1958, also saw the appointment in France of Charles De Gaulle and the beginning of the forward looking, modernising 5th Republic (as a bit of inconsequential trivia, many people have noted a strong physical resemblance between De Gaulle and Tati!). To continue with ideological speculation, it is interesting to wonder whether Tati’s depiction of the old French quarter represents a nostalgia for the rural, populist, “France profonde” values of the 4th Republic? 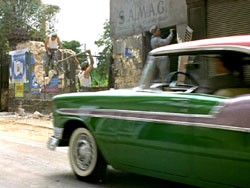 Stylistically, Tati identifies the old and new sections of town through the use of set design, colour (wonderfully reproduced in this new digital transfer) and sound. The contrast is never more apparent than in the transition from a depressed looking Gerald seated in the Arpel’s antiseptic kitchen to a close-up of a colorful weather vane in the old quarter. 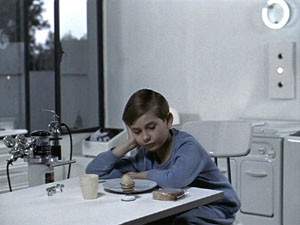 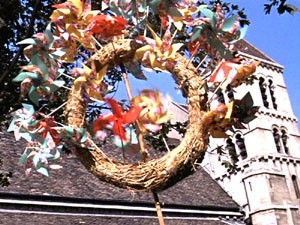 Throughout, Tati contrasts the cold colors and industrial sounds of the Arpel’s and the Plastac factory to the warm, earth tone colors, traditional French music, and human sounds of the old quarter. Tati may prefer this idealized vision of the past, but he remains the realist. In the final few scenes he posts several signifiers of change. The young girl he would playfully poke on the nose is now a young woman. And Tati acknowledges the change by stopping in mid movement and touching her mother instead. Construction workers are seen demolishing buildings in the old quarter. And finally, while Hulot is sent away for a far away post with Plastacs, Mr. Arpel bonds with his son when they partake in a prank in the airport parking lot.

Mon Oncle took nine months to shoot and one year to edit and post-dub. The film was shot simultaneously in French and English versions. Tati shot first in French and after getting the proper take would redo the shot with the actors repeating the lines phonetically in English. The result is a shorter English version (which Tati once claimed to prefer) and slight differences in camera angle and action. The Criterion DVD is the French version. Mon Oncle was the most popular French film of the year and won a Special Jury Prize at Cannes and Best Foreign film at the next year’s Academy Awards.

The bonus short is a special treat for Tati scholars. A template for Tati’s first feature Jour de Fete (1949), the short gives us a glimpse into Tati’s progression as a comic artist, by showing us those aspects he built upon for the feature rendition of the hasty postman, and those he felt inclined to leave behind.