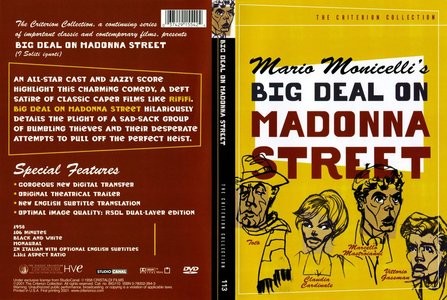 The most gratifying aspect of Criterion’s new digital transfer of Mario Monicelli’s classic comedy caper film I Soliti Ignoti (Big Deal on Madonna Street) is the fuller appreciation of the stunning black and white cinematography by Gianni Di Venanzo. Which, in turn, strikes home the terrible loss to the art of cinematography of Di Venanzo’s premature death at the age of 46 in 1966. Di Venanzo honed his skills working as camera operator on nearly every classic neo-realist film: Visconti’s Ossessione and La Terra Trema, De Sica’s Miracle in Milan, and Rosselini’s Open City and Paisan, before establishing a visual style marked by, to quote Monicelli, “a grey-white and very harsh, cut light.” Di Venanzo was the instrumental in coming up with the visual look that helped establish the late 1950’s and 1960’s as a heyday for Italian cinema: the striking bleached white and robust blacks of 8 ½, the ‘architectural-sculptural’ quality of light/dark in Antonioni’s Le Amiche, Il Grido, La Notte, and L’eclisse, and the surrealistic color tones of Giulietta degli spiriti. Il Soliti Ignoti not only represents Di Venanzo at the height of his creative powers, but also director Mario Monicelli, writers Age and Scarpelli, and actors Toto, Marcello Mastroianni, and Vittorio Gassman (the latter two having recently died, Dec. 19, 1996, June 29, 2000).

In many ways this is a perfect film, not in that it is the greatest film ever made, but in the sense of being like a perfectly cut block of marble. From the opening shot of a desolate city street primed for a car burglary, to the final scene where Peppe (Gassman) unwillingly finds himself trapped in a job line after the botched heist, there is nary a false frame. 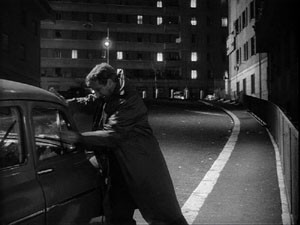 Monicelli must be applauded for being modest enough to accept contributions from every direction, like a great architect bringing his master plan to fruition. This remains one of the finest ensemble films every. From the cast, the writers (Age-Scarpelli, Suso Cecchi D’Amico), to the groundbreaking breezy jazz score by Piero Umiliani. Of the latter, Monicelli claims this was the first Italian film to feature such a jazz score. Interestingly, it is the same year of Miles Davis’ better known improvised score for Louis Malle’s Lift to the Scaffold (Ascenseur Pour L’ Echafaud).

Monicelli’s career as screenwriter/director has seen him work with some of the greatest names in Italian film history, from directors Petri Germi, Riccardo Freda, Vittorio De Sica, and Guiseppe De Santis, to actors Toto, Marcello Mastroianni, Alberto Sordi, Vittorio Gassman, Claudia Cardinale and Silvana Mangano. Along with other Italian octogenarians (Michelangelo Antonioni, Alberto Lattuada), Monicelli’s career has spanned the great Italian tide from postwar neo-realism, to the Golden Age of the Sixties and beyond. Monicelli’s forte remains the Italian comedy, a genre he was instrumental in shaping, defining, and redefining. What makes I Soliti Ignoti so unmistakably an Italian comedy is the admixture of comedy and tragedy. The Italian penchant for mixing social drama with their comedy can be traced back to the first great neo-realist film, Rome Open City. As played by the great comic vaudevillian Aldo Fabrizi, whose character was scripted by Federico Fellini, the resistance priest interjects comic episodes amidst the tragic war-time scenario. Writer-director Luigi Comencini typified Italian comedy best when he referred to two scenes in Rome Open City spaced apart by only a few moments (Comedy, Italian Style 1950-1980, ed. Adriano Apra and Patrizia Pistagnesi, Edizioni Rai, Radiotelevisione Italiana). In the first scene the priest is unable to convince an obstreperous old man to feign that he is dying to prevent the Nazi’s from searching his room. The scene cuts to a corridor, where we see the Nazi’s approaching the old man’s room. Before the scene cuts back inside the room we hear the offscreen sound of a loud thud. We cut back to the room and see the Nazi’s observing what looks like a priest giving last rites over a dying body. When they leave we see a young boy reveal the frying pan that the priest used to knock out the old man. The scene would not be out of place in a slapstick comedy. Moments later we get one of the seminal dramatic moments in neo-realism: the Nazi’s cold-bloodied shooting of Anna Magnani as she runs after her captured husband.

Monicelli plays a similar shift in Ignoti. Hell bent on revenge for having his heist plans stolen when in jail, the pathetic Cosimo (Memmo Carotenuto) sinks further into tragedy. He enters a pawnshop with the intentions of robbing the cash. He points the gun at the teller and asks him do you know what it is. The teller, assuming in these troubled social times that he is selling the gun, calmly takes the gun from his hand, looks it over and replies, Sure I know it. It’s a small caliber Baretta in very poor condition (shades of the poorly written heist note in Woody Allens’s Take the Money and Run, that’s ‘gub’ not ‘gun’). Cosimo, so surprised the cigarette nearly falls from his mouth, walks out of the store like a puppy dog with this tail between its legs. Later he fails to rob a purse from an old lady, and is run over by a streetcar as he eludes civilians chasing him down from his aborted attempt at purse snatching. The scene fades to his funeral. The moment is made ironic when a straight-faced Toto, having exited from the wake, laments, A professional like him stooping down to muggings..that’s kid’s stuff. The film, while remaining clearly on the level of farce and high-minded parody, beautifully plays the humor off the social conditions that plagued post-war Italy (poverty, unemployment, rebuilding). 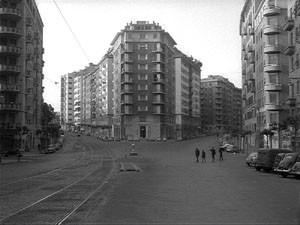 For a fuller appreciation of this classic comedy I point you to this exclusive interview with Monicelli:

(An Interview with Mario Monicelli)