Fractal Images of Memory in Mother and Son, Part 1

“We are constructed in memory; we are simultaneously childhood, adolescence, old age and maturity.”

According to Gilles Deleuze, the post-war period gave rise to the time-image, where he argues that time is no longer subordinate to movement, which is based on the sensory-motor schema or action-image of the old cinema (Cinema 2 xi). Deleuze cites Italian neo-realist and Ozu films as manifestations of the time-image (Cinema 2 1-18) and develops the idea of the crystal-image in European cinema (Cinema 2 68-97). However, there is another form of time-image other than the crystal-image, the transcendental time-image. Aleksandr Sokurov’s Mother and Son (1997) contains examples of what I am calling the transcendental time-image. In this paper, I will be relating the time-images found in Mother and Son to the notion of fractals. 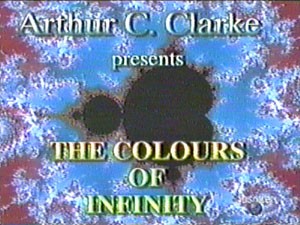 Fractals have been said to be a way of visualising chaotic behaviour (McGuirre 92). It is based on the “collage” theorem where fractal images are seen as a collage of transformed copies of the whole (55). It encompasses dynamic behaviour known as deterministic chaos that is based on iteration of simple non-linear rules (73). In the Discovery television documentary The Colours of Infinity, we are informed that fractal geometry is currently forging new frontiers in science, from creating images with better resolution on computers, to providing understanding of how our blood circulates in the medical profession; and to one day, hopefully, explaining how the brain works.

Arthur Clarke explains that the Mandelbrot set, which is the fractal formula: z = z 2 + c (McGuirre 75), when magnified goes on creating new configurations to infinity (i.e. it keeps on remaking itself forever). The Mandelbrot set has been described as the “thumbprint of God!” When the Mandelbrot set is magnified it produces “mini Mandelbrots” that are identical yet different with each generation. Therefore when it is magnified a million times over, new images will keep emerging. I intend to apply this idea to film images, particularly to those found in Mother and Son. Memory, that is pure recollection, will be compared to the Mandelbrot set. I will argue that Memory can be seen as the basis and foundation of “fractal images” in Mother and Son. When memory-images occur and recur these images, like the magnified “mini Mandelbrots,” interact with themselves and our psyche forming and evolving our perception with variations into something new, which in turn helps shape our being and identity. 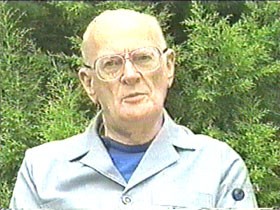 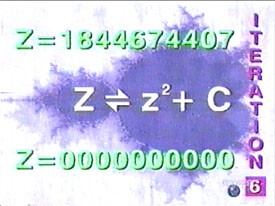 In his book (Matter and Memory the French philosopher Henri Bergson reduces all matter to an aggregate of “images” (p. xi). Concurrently, Bergson (and Deleuze) believe(s) that we live in a world of images. According to Bergson, there are two types of memory: one that imagines and the other that repeats (93). Although the two are imbricated and inter-dependent, this paper will focus on the former, which is also called pure recollection. Bergson states that pure memory opens “us a view of what is called spirit” (78), and further argues that pure memory is latent and unconscious (181). Bergson articulates the paradox of pure memory, where he argues that it is both powerless and powerful because it is latent in the presence of consciousness but powerful and significant when recalled. For the purposes of this paper I will build on Bergson’s ideas of Memory by extending it into the realm of Carl Jung’s conception of the collective unconscious and archetypes to understand the fractal images found in Mother and Son.

Julian Graffy alludes to archetypes in his description of Mother and Son when he writes, “…this is a pre- or post-Oedipal world, with no father, no conflict, no history, no narrative,” and in another instance when he describes the mise-en-scene of the film as a “archetypal house, garden and ‘world beyond’…” (17). Through Paul Schrader’s interview with Sokurov we arrive at a sense of Sokurov’s aesthetic vision. Schrader aptly entitles the piece after a quote from Sokurov that encapsulates Sokurov’s “archetypal/Jungian perspective” and which exemplifies his “feeling-toned complexes”—“the history of an artist’s soul is a very sad history.” In the interview Sokurov describes a beautiful archetypal image when he speaks of his village: “I was born in a little village in Siberia that doesn’t exist anymore; they built a hydroelectric power station, and my little village was buried under water. If I want to visit the place of my birth, I could take a boat, get there by water, and look into the bottom of the sea.” The description speaks poetically of a sense of the apocalypse and an eternal quest for the Self, which is a very Jungian approach preoccupied with individuation. When Sokurov was asked which artists helped him to define himself, he replied, “I’ve learnt a lot from the real world surrounding me. Sometimes these people had nothing to do with art at all. They were simple kind, generous, honest and beautiful human beings. And very well educated as well. But my milestone was of course Chekov.” Sokurov professes a deep sense and love for humanity. He comes across in the interview as a soulful man deeply connected to his inner Self and inner world. This is evident not just from his films but what he says. It is especially evident in his responses to these two questions asked by Schrader:

P.S.: Do you think thematically or visually in advance of the film? Where does it begin for you?

P.S.: In Japanese are there is a concept of mono no aware, sweet sadness, the pleasure of endings, of autumn and seeing a dying leaf.

Sokurov: But for Russia, sweet sadness and pleasant farewells are not possible, on the contrary, in the Russian sense of elegy, it’s very deep, vertical feeling, not a delighting one. It gets you deeply, sharply, painfully. It’s massive.

One can see here a kinship to Jung’s ideas, particularly in how Sokurov is trying to articulate the Jungian unconscious of feeling-toned complexes. Memory (or pure recollection, which includes the collective unconscious) is a site for the formation of fractal images. A fractal has been described as a geometrical figure in which an identical motif repeats itself on an ever-diminishing scale (Lauwerier xi), which is called iteration. Or another variation of the description of a fractal is that it is characterised by a type of built-in self-similarity (or self-affinity) in which a figure, the motif, keeps repeating itself on an ever-diminishing scale (xii). Hastings and Sugihara describes fractals as:

…pushing a simple basic building block (a straight line) into a complex shape with a complicated function. The complexity in fractal geometry comes from the building blocks, and the process which generates the larger pattern is relatively simple. The simple process, recursion, essentially involves echoing a simple rule over and over again, giving rise to self-similar geometry. Indeed the assembly of fractals from their natural building blocks, smaller self-similar fractals, appears to capture some essential aspect of the growth and branching rules of nature itself. (3) 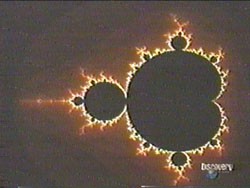 The basis of a fractal is a simple rule, a formula, such as one mentioned earlier: z = z 2 + c, which is the Mandelbrot set. This simple basic building block is pushed into complex processes that in turn complicates the building blocks; both feed off each other to form a complicated and elaborate web of fractal geometry. Hastings and Sugihara explain that “fractal geometry builds complex objects by applying simple processes to complex building blocks” (3) Such is also the process of perception (which David Humes defined as a "bundle of sensations"). The cognitive process is similar to fractal geometry—it develops as one’s knowledge grows; like the building blocks pushed into complex processes creating an intricate web of perception. Perception or the cognitive process is imperative and intrinsic to understanding a filmmaker’s creation of images, especially Sokurov’s transcendental time-images. Bergson argues that memory is the intersection of mind and matter, and that it has a psycho-physiological relation (Matter and Memory xvi). Our perceptions, he asserts, are undoubtedly interlaced with memories; and that inversely, a memory only becomes actual by borrowing the body of some perception into which it slips and that perception and recollection interpenetrate each other (72). In another instance, Bergson writes that memory creates anew the present perception—or rather it doubles this perception by reflecting upon it either its own image or some other memory-image of the same kind (123), and that we are constantly creating and reconstructing our perception (126). According to Bergson, the source of memory-images is pure memory, which interacts and develops into perception (170). He also argues that a general idea is experienced before it is represented, which is steeped in “similarity.” And it is this similarity that allows abstraction: memory grafts distinctions upon resemblances that are spontaneously abstracted (208-209). The latter speaks precisly of how fractal geometry works. “Similarity” can be likened to self-similarity in fractals that is constantly creating and reconstructing.

Deleuze borrows Bergson’s ideas in demonstrating how we understand time-images through automatic and habitual recognition (Cinema 2 44-67); he shows how recognition recalls virtual images (memory-images) that form a circuit. Each circuit obliterates and creates an object and through a double movement of creation and erasure, will continue to form a series of circuits that will soon become a multiplicity of circuits, continually creating and obliterating, which will create and re-create meaning and new meaning (46-49). Deleuze explores the dynamic nature of memory when he writes that through:

…a constituted memory, as function of the past…..we witness the birth of memory, as a function of the future which retains what happens in order to make it the object to come of the other memory…memory could never evoke and report the past if it had not already been constituted at the moment when the past was still present, hence in an aim to come. It is in fact for this reason that it is behaviour: it is the present that we make memory, in order to make use of it in the future when the present will be past. (52)

In a strange, uncanny sense, Memory is a sort of “atemporal” entity of its own, a “spirit” that interestingly functions out of time and yet not—it is a paradox! Perhaps it is more accurate to say that Memory is not out of time because we are trapped in time; but rather, it is not bound by the rules of time. Therefore, pure recollections are constantly summoned from the depths of Memory, which develop into recollection-images. And when recollection-images are sufficiently defined, a new dimension of subjectivity is forged (54). Deleuze likens this to a dream when he says that

…the virtual image which becomes actual does not do so directly, but becomes actual in a different image, which itself plays the role of virtual image being actualised in the third, and so on to infinity: the dream is not a metaphor but a series of anamorphoses which sketch out a very large circuit. (56)

Our true reality is inherently and intrinsically enmeshed in dreams. Dreams are manifestations of the collective unconscious. The process that Deleuze articulates describes the dynamics of fractal images found in Mother and Son. The very idea of “mother” and “son” and the employment of the universal mother and son in the film (we are not given the names of the characters) draw heavily on archetypes. Indeed Mother and Son is like a dream, drawn from the depths of Memory or archetypes, where notions of love, pain, dreams and transcendence are articulated. The images we see in the film become “actual” from “archetype-images” (recollection-images), and then become the “third” image and so on to infinity — the film brings us to “infinity,” to a transcendental space which Graffy describes as “pre-“ and “post-Oedipal.” To a transcendental “world beyond” where an archetypal or eternal house and garden exists and where our souls can find rest. It is this same world that Sokurov tries to conjure and articulate in his responses to Schrader’s questions in the interview.