The Use of Binary Oppositions and Space

We all have at least two sides. The world we live in is a world of opposites. And the trick is to reconcile those opposing things. I’ve always liked both sides. In order to appreciate one you have to know the other. The more darkness you can gather up, the more light you can see too. [1]

Blue Velvet, as David Lynch describes, is a “story of love and mystery.” [2] In order to experience this story of love and mystery, Lynch invites the viewer to enter into a hermetic space as both detective and voyeur. Set in the town of Lumberton, North Carolina, USA (although it was shot in Wilmington), Lynch creates a world that is at once familiar and strange; it is a world governed by opposites, where surface and depth, good and evil coexists simultaneously. Through an analysis of formal and thematic elements, this essay will examine how Lynch organizes Blue Velvet’s narrative according to binary structures. In the film, opposites function to delimit a certain psychological space, one that is momentarily available to the viewer through identification with the male protagonist. Perhaps one of the most unique aspects of Lynch’s filmmaking is his ability to translate psychological and dream space into a cinematic experience. I will analyze how this cinematic experience unfolds according to 1) a binary logic where characters, particularly the females, embody opposing forces, and 2) a spatial logic, where the movement between surface and depth becomes a trope for experiencing the mystery of the mind/imagination. Lastly, I will draw on Laura Mulvey’s theories of scopophilia and the male gaze in order to think about how Lynch’s use of Freudian themes potentially reflect back on the cinematic experience itself.

One of the most compelling aspects of Lynch’s style is his ability to make that which is familiar, strange. Above all, Blue Velvet is an American movie. It is set in a prototypical American town inspired by Lynch’s own memories of his childhood in Boise Idaho. [3] The film resonates according to the viewer’s familiarity with stereotypical images of 1950s suburbia, American popular music, and the American hard-boiled detective genre. While he draws from a familiar repertoire of American mythologies, Lynch exaggerates and infuses these images and sounds with a surrealist touch. The strangeness of this “neighborhood picture” [4] arises from Lynch’s interest in what lies beneath the ordinary: “The whole idea of the film is going underneath the surface of a supposedly peaceful neighborhood in a small American town…It’s a real American film…” [5] Lumberton, USA becomes a microcosm and laboratory for Lynch to explore what he imagines as the mystery, terror and beauty underlying the American psyche.

The notion of surface and depth, order and chaos, come into play according to a Freudian logic of the unconscious. According to Betsy Berry, the juxtaposition of “good and evil leads to the strange, dual nature which pervades every part of the film and every character within it. [6] Lynch, himself, has acknowledged his aesthetic interest in extreme differences: “Everybody’s got many threads of (Good and Evil) running through them. But I think in a film, white gets a little whiter, and black gets a little bit blacker, for the sake of the story. That’s part of the beauty of it, that contrast…” [7] This contrast between light and dark, surface and depth is treated quite literally in the film. Ron Magid humorously likens Blue Velvet’s overall structure to that of a Wonder Bread sandwich, where the “bright, cheery tones” that comprise the mirrored opening and closing sequences surround the “dark meat that makes up the film’s disturbing middle section.” [8] The formal contrasts between colors contribute to the film’s dream-like atmosphere. For instance, the visual sharpness of a yellow jacket in itself holds no significance, but in the context of an unfolding dream/mystery, it becomes poignant and heavy with meaning. Color assumes a textural quality and is capable of evoking an emotional or psychological state, the most obvious example being the blue velvet that is a source of arousal and comfort for Frank Booth. Colors also work in opposition. Literally, the supersaturated brightness of the red tulips and yellow daffodils, set against the white picket fence make the blackness of night seem thicker and more impervious. Day and night stand in for exaggerated conditions of consciousness. In Lynch’s hands, day is like a state of constant overexposure, where consciousness is unable to turn inwards and pulsates only at the level of surface. Night, by contrast, is marked by an absence of light, a void that is inward turning and vertiginous. Moreover, the characters articulate psychological states of love and hate through evocation of light and dark. Sandy, for instance, speaks of a dream in which thousands of robins bring forth light and love to illuminate the darkness of the world. By contrast, Frank Booth finds comfort in and feeds off of the absence of light. He remarks at several points in the film, “now it’s dark,” as if to communicate his psychological comfort and familiarity with the unconscious. 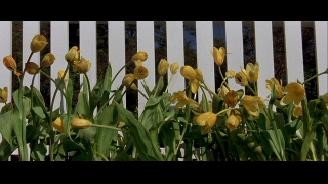 One of the most overt plays with opposites arises from Lynch’s noir-inspired use of women in the film. Typical of the genre, the blonde embodies that which is rational, loving and innocent, while the brunette is cast as irrational, sexualized and dangerous. Respectively, Sandy and Dorothy Vallens function as opposite poles by which Jeffrey gauges his own mental states. He associates with Sandy most often during the day, communicating with her his rational plans and hypotheses about the mystery he is involved in. Her sensibility puts him in touch with the world of the everyday and the familiar; like a buoy, she serves to reorient him to the surface when he risks becoming subsumed by the mystery of his own mind. Dorothy, by contrast is associated with the irrational, and exists as a site for Jeffrey to gain knowledge of his own unconscious desires and perversions. Curiously, it is Jeffrey who acts as a preserver for Dorothy when her own fears of “falling” threaten to overwhelm. While the two women function as counterpoints in the film, Michael Chion suggests that they in fact incarnate two sides of one figure, “each side endlessly leading to the other as in a mobius strip.” [9] He notes, for instance, Jeffrey’s first encounter with Sandy, as she emerges out of a void-like darkness. Similar to the way the seductress in Eraserhead steps out to greet Henry, Sandy emerges from the night and incites Jeffrey to go deeper into the mystery. Curiously, Jeffrey will later claim at the diner that it is indeed she who is a mystery and not Dorothy, as one would have assumed. While it is not necessary to literalize the relationship between Sandy and Dorothy, Chion’s interpretation serves to underline the dreamlike aspects in Blue Velvet. As in dreams, characters, colors, and textures in the film take on emotional and psychological resonances, while their concrete meanings remain elusive and beyond reach. Signifiers refer not to some external truth, but to the mystery of the dreamer’s (viewer’s) psyche itself. In this way, the film is intensely multilayered. 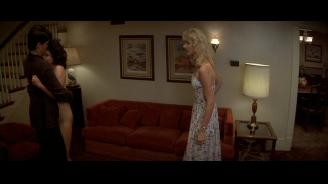 In Blue Velvet, Lynch has constructed a hermetic world where the film’s secrets and mysteries are analogous to the mysteries of the mind. Film is, according to the director, “a great way of giving shape to the subconscious.” [10] In order to do so, Lynch relies on a spatial logic, and surface and depth serve to reinforce each other. The most obvious example of this relationship occurs at the beginning of the film, where after presenting successive picturesque images of this ideal middle-American town, the camera tracks through the sculpted veneer of a lawn to reveal a swarming, chaotic mass of violence beneath. The usually unseen and irrational forces beneath the everyday become perceptible through the penetrating gaze of the camera. Says the director of his fascination for mysteries, “(they) provide a corridor where you can float out. The corridor expands and many, many wonderful things can happen.” [11] For Jeffrey, the transition between surface and depth is traversed by way of the severed ear-as-portal. The ear, even while no longer attached to a body, functions to connect two spaces together. As the camera moves deeper into the canal, an increasingly loud expanding sound signifies movement into a new space. Jeffrey’s discovery of the ear, a gift from Frank, enables him to delve deeper into the mystery of his own mind, to realize to what extent he and Frank are indeed “the same.” 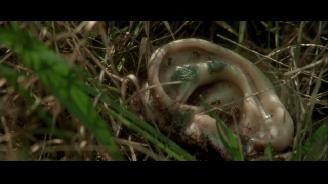 By way of identifying with Jeffrey as protagonist, the viewer initially engages the film’s mystery in the role of detective. Gradually, the invitations to a voyeuristic gaze position the viewer more as a pervert. Sandy playfully poses the question to Jeffrey: “I don’t know if you are a detective or a pervert,” inciting the viewer to reflect, as well, on his own motivations and desires to know and to see. As Lynch readily remarks, “Film is really voyeurism…we want to see secret things, we really want to see them.” [12] The pinnacle scene in which the film indulges this scopophilic desire occurs when Jeffrey witnesses the “primal scene” between Frank and Dorothy. As cinematographer Fred Elmes recalls, the camera’s point of view was kept in line with that of Jeffrey’s from his location in the closet:

We never shot anything that he couldn’t actually see from the closet. The set was designed in such a way that the closet was in a special spot where Jeffrey can see the living room, he can see down the hall to the bathroom, and he can see part of the kitchen…

Admittedly, the space is set up specifically to enable visual mastery. The privileged view of the eroticized body and the sexual act begs for a feminist condemnation of the way in which cinema serves to reinforce the psychical obsessions of a patriarchal society. Further, as Chion notes, the performance appears contrived so as to elicit the greatest amount of pleasure for Jeffrey the voyeur:

What is unusual about this scene is its theatricality. One wonders whether the characters do not enter, speak, move and behave solely to please the voyeur knowing full well they are giving him a show. [13]

Indeed, not only do Dorothy and Frank give Jeffrey a good show, they do so for the cinemagoer who, shrouded in the darkness of the theatre, sits in his own closet of sorts. I suggest that Lynch fully understands narrative cinema’s conventions of viewing, making Blue Velvet a particularly self-conscious film. He plays with these conventions not only through exaggeration, but also through an interruption of sorts. Upon Dorothy’s discovery of Jeffrey, she pulls him out of the spectator’s role and forces him “to exhibit himself, as on a stage.” [14] This unusual turn of events no doubt makes the spectator nervous, particularly as Dorothy brandishes her knife threatening castration. Despite the intense sexual and violent energies Lynch brings up in this scene, there is a certain humour in witnessing such a literal enactment of Freudian clichés. And it is the viewer’s familiarity with these cinematic routines that gives the film a pleasure surpassing that of mere scopophilia.

By the film’s end, narrative resolution is marked by a spatial symmetry. The camera tracks out from Jeffrey’s ear, signifying a return to the ordinary and rational structures of the surface. Order is seemingly restored, but the film’s final statement, in its image of a fake robin grasping a squirming beetle, is that opposite forces continue to engage each other. The mystery and beauty of the mind, for Lynch, is momentarily graspable through film as a language of the subconscious.

6 Betsy Berry, “Forever in My Dreams: Generic Conventions and The Subversive Imagination in Blue Velvet,” Literature/Film Quarterly, vol. 16, no. 2 (1988), 83.

Stephanie Lam has an MA in Cinema Studies from the University of Toronto. She is interested in the boundary between cinema and installation art. Her work has also appeared in CinéAction.