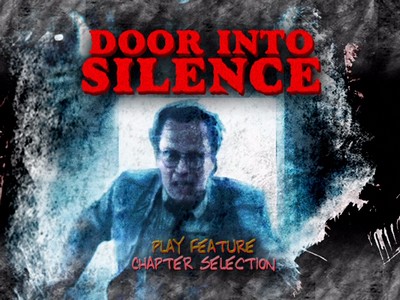 Outside of revisiting the location –Louisiana– of his gothic masterpiece The Beyond, and a few odd zoom and rack focus shots, this tepid supernatural drama (which on the title card reads “Door to Silence”) bears little resemblance to any of Fulci’s (far superior) earlier films (which could explain why the director name on the credits is H. Simon Kittay). Severin Films has recently released this, Fulci’s last film (produced by Joe D’Amato), in a bare-bones (rare for them) DVD release and, given that the film has only been available on VHS, it is welcome. It must be said that Severin Films is not out to deceive anyone by stating on the back cover that the film “remains a must for all Fulci completists.” Even at that, Fulci fans will find it difficult to get too excited about this film, which seems to have been intended for television (which accounts for the zero blood and gore count and the 4:3 aspect ratio). Any one else coming to it cold will be in for an uninspired 87 minutes of John Savage (looking plumb and middle-aged) slowly coming to the realization that most viewers will have surmised long before the ‘revelation.’ The film is essentially a bloated version of Roberto Enrico’s classic short, Incident at Owl Creek Ridge, minus the style, suspense, or sense of surprise. In fact Fulci makes a direct reference to the latter film in the scene, about halfway through, where the already ‘dead’ Savage (playing a well off real estate tycoon Melvin Devereux) imagines returning to his wife at his country home, then waking up as from a dream.

In the opening pre-credit we are shown a car accident. At the point of contact, Fulci cuts to a telling close-up of the car’s clock, reading 7:30pm (7:29pm to be exact). When Melvin looks at his car clock a few scenes later (and every other time) and we see the exact same clock, the exact same time, well the cat is out of the bag. While the narrative seems to move forward, Melvin is in a temporal limbo, as he drives and drives and drives along the Louisiana dirt roads, ostensibly looking for himself. And yet Fulci is not exactly consistent with Melvin’s relationship to the real world. Most of the time he is visible to living humans and interacts with them, but on a few occasions he seems to be an ‘invisible’ entity, a la Carnival of Souls (like a scene in the woods where a hunter seems to shoot right through him and then walks right past him, addressing Melvin but with his face away from the camera which leaves open the possibility that the voice is imagined). Contrarily, a scene near the end establishes that Melvin may be dead (a ghost?) but still has the ability to act upon the living. He visits a relative, who happens to be a palm reader. She gives him a free reading, and warns, “According to these lines you’ve been dead for hours.” The phone rings. She answers and the words coming from the other end of the line –a call announcing Melvin’s funeral– shocks her into a cardiac arrest.

Fulci runs through every possible narrative signpost of Melvin being in a “purgatorial” state: a mysterious woman, later revealed, not surprisingly, to be the Grim Reaper, a hearse transporting a coffin with his name on it, a series of continuous ‘crossroads’, a vision of his childhood, portentous dialogue, such as the following exchange with his Grim Reaper in white: Melvin: “I don’t have much time.” Lady in white: “I know,” etc. The audience is given so much narrative knowledge of Melvin’s living dead state that one can only surmise that the point of the film is no longer surprise or revelation but fate and predestination.

The opening funeral scene holds some interest in the way Fulci crosscuts between an ongoing burial and a subjective camera moving through the cemetery in search of a headstone. We next see Melvin standing in front of his father’s gravesite, with the camera tracking toward him. The scene then cuts to a closer shot of Melvin speaking to his father’s spirit, while the mysterious lady in white appears in the background observing him (the fact she makes her introduction in a cemetery is yet another hint of her Grim Reaper status). Melvin is a little perplexed when the woman approaches him as if they know each other. After some small talk he drives away from the necropolis to return home to his wife. Melvin’s drive home, however, takes a series of bizarre detours and roadblocks (some literal, such as when he drives past a construction road block). 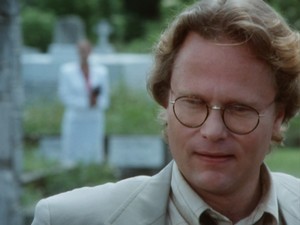 One can excuse the lame plot if the style makes up for it, but this is not the case with Door into Silence, which is flatly lit and (with a few exceptions) visually uninteresting. To really have made this transparent revelation an aesthetic non-issue Fulci should have given the film an expressive visual style to suggest Melvin’s dream/living dead state; but perhaps time and financial constraints made this impossible.

The most ‘euro-cult’ moment of the film is a throw-away moment where Melvin walks into a local bar filled with men and a young mini-skirted woman dancing sexily by the jukebox. Another potentially engaging scene, which breaks the monotony of Melvin’s insistent Uroborusian search, concerns an young attractive brunette hitchhiker who forces herself into his car and commences to engage Melvin in some coy seduction. Melvin loosens up for the first time and we get to hear some fun banter between them, which is cut short when the seduction turns to business and she offers herself to him for $50.00. Unfortunately, it appears every body part is dead and Melvin isn’t up to her proposition (she leaves, yelling “Impotent asshole”).

The only scene with any pretense at old fashioned gothic atmosphere is the one where Melvin visits a funeral home run by the lady in white (which cribs music from Soavi’s Stagefright, which was also produced by Joe D’Amato). When he examines the room filled with open coffins it is the only time there seems to have been any care at a specific lighting set-up to generate shadows and mood. Melvin looks into a series of coffins all with the name tag “Melvin Devereux” but housing different people, until he comes across his own corpse. As he brings his hand to touch the corpse it disappears, and he runs out of the funeral parlour. 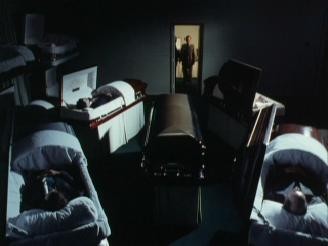 The first cat and mouse game between Melvin and the hearse holds our interest. Not so the fourth and fifth time. In fact the chase leads to a moment of comic relief in the scene where Melvin comes across a hearse parked outside a church. He enters into an all-black congregation expecting to find his own body in the covered coffin being mourned by the church goers. He pulls away the cloth covering the coffin but is attacked by the angry congregation. He leaves the church to discover a second hearse driving past the church!

The film concludes with Melvin in a final game of chicken with the hearse. The chase is intercut with shots of an orange sky and sun, and shots of Melvin sweating. The hearse driver signals him to pass. As he does he is momentarily blinded by the sun light and drives into a head on collision with a truck. The scene cuts to the car’s clock, reading 7:29. At least Fulci ends the film with a visually interesting (and economical) final shot. The camera frames Melvin’s burning wreck of a car. The camera pans right and dollies back to follow two ambulance drivers wheeling Melvin’s corpse away. As they leave frame right the camera captures a police officer taking down the truck driver’s statement. The camera continues to pan right filming Melvin’s corpse being placed into the ambulance and other officers putting up a road block. As we hear the truck driver’s off-screen voice repeating “there was no one on the road, nothing…” the camera isolates the lady in white and slowly zooms into a close-up before it cuts (a long take of 40 seconds). She then gets into her car and the camera pans to her license plate, which reads “D.E.A.T.H.”. The final high angle shot of the accident scene ends on a freeze frame and the following quote from the Book of the Apocalypse: “…When you cross the gates of nothing, no one will be near you: only the shadow of your own death….” 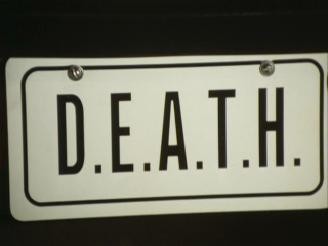 In what can only be considered a coincidence, there is a short 1983 16mm student film entitled From a Whisper to a Scream made by Stephen Campanelli (who since then has become a regular camera/steadicam operator for Clint Eastwood) at Concordia University, Montreal, that elegantly condenses Fulci’s film to a succinct ten minutes. A corpse is wheeled into a morgue and placed into a walled crypt. When the attendants leave the room, the steel door of the crypt pops open, and the man gets up off the steel slab, apparently still alive. He begins to run, trying to find the exit door. The closer he nears the exit, the more he sweats. The film climaxes with crosscutting between slow motion shots of the profusely sweating man running toward the exit and the camera tracking toward the morgue incinerator. In the climactic revelation the man’s corpse, which has been on the steel slab all along, is tossed into the burning incinerator fire. There is little chance that Fulci could have seen this film, but the striking similarity between this 1983 short and Fulci’s 1991 feature just goes to show how shop-worn the plot is.

Even thought the film is bottom drawer Fulci, as a fan I was very happy to finally see the film in a good transfer and was at least able to appreciate some of its tenuous links to Fulci’s finer works (theme of fate, invocation of the apocalypse, a world without benevolence, etc.). Severin Film’s DVD comes in a bare-bones (original) 4:3 transfer, with an English audio which, given that Savage delivers most of the dialogue, is the best possible option (it is definitely Savage’s voice we hear). The transfer is clean, with good color reproduction and about as good as you could expect given the uninspired visual design.