Jan-Erik, an idealistic high school student, treated harshly by the sadistically severe Latin teacher nicknamed “Caligula” (whose real name I’m not sure we’re ever told), falls into a clandestine relationship with a beautiful yet darkly troubled local girl with a reputation… only to discover she’s being blackmailed into a sexually humiliating relationship with the hypocritical teacher.

About twenty five years ago, catching Ingmar Bergman’s sparse and psychologically severe Winter Light (1963), the second in his loose-fitting religious trilogy and the first of his prodigious body of work I ever saw (also at the Film Forum), was perhaps the first of what I would consider a profound cinematic awakening in my adulthood (compared against the much more plentiful wide-eyed experiences in my earlier years with, for instance, the innocent magic of Ray Harryhausen’s stop-motion creations). With its careful orchestrations of camera and performance perfectly aligning to reveal transformative psychological existential angst, Winter Light (and so many of the other Bergman films I quickly gobbled up), opened up a whole new recognition of the potential for cinema (ironically, because Winter Light, and many of my favorite Bergman films, are basically intimate chamber pieces).

I’ve said before that watching a film from Russian filmmaker Andrei Tarkovsky (and I mean all of them, except perhaps his last, The Sacrifice, which remains a powerful film, yet falters in comparison with his others, ironically because it tries too hard to be a Bergman film) is on the level of watching the work of someone speaking with angels. In the same vein, experiencing a Bergman film (many of them, anyway) is as close to a spiritual experience (with all of the associated suffering and doubt that Protestantism’s own Martin Luther listed as a necessity) as I’m likely going to get while wandering about on this mortal coil (I don’t suspect giving my life over to Jesus is in my future). In other words, you don’t throw on a Bergman and Tarkovsky film late on a restless Saturday night to pass the time until you fall asleep. These films require commitment, body and soul.

While I don’t think of myself as particularly well-versed in the works of too many directors, Bergman is an exception. I’ve seen the important films (which would number about 40 out of his 60 or so) at least four or five times by this point, and most of the lesser ones (I use ‘lesser’ in determinedly relative terms — there isn’t a bad Bergman movie in the bunch… that I know of, anyway) once or twice. So as cool as I thought the Film Forum program celebrating the 100th year of Bergman’s birth was (with the notably acerbic filmmaking grump having made it through 89 years of that century, with his last film, a chamber piece sequel to the brilliant Scenes from Marriage from almost 30 years before, Saraband being equally as raging, raw and powerful as anything he’d ever done, directed by him at 75 years of age, with nary a hint of acquiescence to age), I hadn’t planned to catch any of it, as I’ve spent a lot of time at this particular till (and continue to go back when the time is right and the master seems to be calling). However, as I was in New York during the first week of the program and there was a sort of chronological approach to the screenings, I decided it would be a good opportunity to catch up with some of those earlier Bergman films that I’d either only seen once years ago or perhaps one of the few I’d missed.

Considering it was not directed by Bergman at all (but by an apparently earlier important Swedish cinematic figure, Alf Sjöberg), but with him serving as the sole screenwriter (and assistant director), Torment was perhaps the most interesting to see of these early works.

While the sense and style of the later auteur filmmaker Bergman is already quite apparent in the austerity of the dialogue, the severity of the characters and their existential struggles against an unjust universe (with even the deeply conflicted and perversely cruel taskmaster himself, ‘Caligula’, tortured by the reality of his destructive sexual and sadistic impulses), this coming of age tale of a boy shedding his innocent perspectives of love and respect for authority and ultimately rejecting the patriarchal authoritarian school system that allows sadism to relish, is both nicely realized and yet… also feels like the work of a slightly naïve twenty-something that Bergman was at the time (as always, he wrote in his age bracket, with his characters aging over the years with him, culminating in that final film Saraband being about two characters deep into their 70’s as he was – with Bergman clearly sticking to the old saying, ‘write what you know’). The crucified Christ hovering on the wall during a church funeral, forever silent and unmoved by any anguished pleas for justice or for simple acknowledgement, is certainly a recurring Bergman motif.

It was fun to see familiar faces from Bergman’s cinematic oeuvre already showing up, including a young Stig Olin (who would be all over Bergman’s first decade of films), playing a student who has an early conversation about morality and love at a café (setting up the trajectory of the story) with Jan-Erik that seems (not surprisingly, considering how influential he was on Bergman) clearly modeled after the one that sets up a far different death in Dostoyevsky’s Crime and Punishment, another youngster Birger Malstem (uncredited here), the interestingly faced thespian who seemed important to Bergman for a short early period and that was it… and then there is an early quick scene, setting up the harshness of the school, with the great and towering Gunnar Björnstrand, as important (if less recognized) a male figure as Max Van Sydow would become for Bergman, there through all the decades, appearing in so many of the important films.

With the oppressive atmosphere created through rain splattering outside the classroom windows and striking shadows from shade slats, the use of dark unlit spaces to maximize the terror of Caligula’s hold over the doomed young girl (the reveal for the first time of the sadistic teacher as her torturous lover slowly emerging from her closet is as brilliantly realized as anything by Fritz Lang during his great German period), the director Sjöberg does a masterful job at referencing the psychological-horrors-warping-the-landscape style coming out of European expressionism (the dark shadow of a hand over the vulnerable woman in bed appears straight out of Nosferatu from 1922), as well as a more current American film noir sensibility (interesting in that these film approaches were rarely of direct interest to Bergman, other than tangentially or as a later deliberate experiment, with films like Hour of the Wolf in 1968). 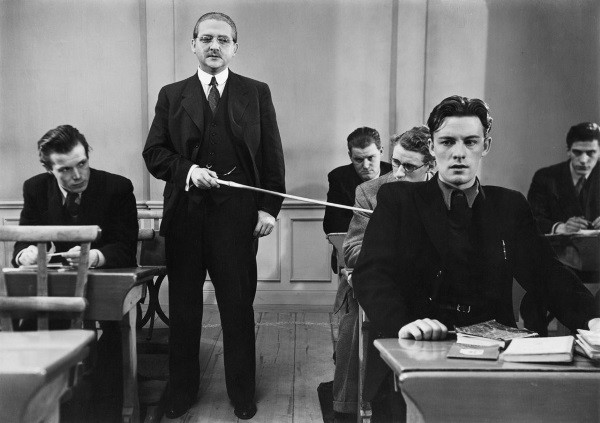 The opening credits of Torment, with the names playing out over a close up of the two troubled young lovers in a tight embrace, is strikingly similar to that of the opening of the doomed Farley Granger and Cathy O’Donnell in Nicholas Ray’s brilliant noir debut from just the year before, They Live By Night; the difference being Ray plays his ironically, with his lovers looking ecstatic, and the orchestral score accenting their bliss, unaware of the despair that will follow, while Sjöberg plays his with straight anguish (what do you expect, he’s a Swedish filmmaker, after all).

While, by the end, there’s little concern for the plight of the tragic girl — with her role really serving not much more than as a function of our young hero’s movement into awareness and enlightenment – the actress Mai Zetterling who plays her is captivating to watch. A little research revealed her as an fiercely feminine whirlwind, not only moving onto a successful career as an actress in big studio American films, but also carving out an influential niche as a director in Sweden, including a few daring, ahead of their time and controversial Swedish films in the 60’s dealing head on with homosexuality, sexual decadency, repression and straight-up women’s liberation, starring important female Bergman-regulars like Bibi Andersson and Harriet Andersson. With some of them available in streaming, her films just went on my watch list.