The Man Who Loved Children: László Nemes’ Son of Saul

László Nemes’ Son of Saul (2015) is the second movie I’ve seen specifically about the Sonderkommandos—units of Jewish prisoners in the concentration camps tasked with leading people into the gas chambers, pinching their valuables, and disposing of the bodies. As in Tim Blake Nelson’s The Grey Zone (2001), the central character is spurred to action when he discovers a child who’s survived the gas chamber, and the film ends with an uprising like those which occurred at Treblinka and Sobibór in 1943 and Auschwitz in 1944. But while they share essentially the same subject matter, the experience of watching each movie is fundamentally different: Nelson’s film is talky and philosophical, whereas Nemes’ is terse and visceral, the kind of movie you feel in your bones.

Of the two films, Nelson’s is the more classical as its narration is both omniscient (in order to accommodate the large ensemble cast) and highly communicative. Conversely, in this movie the camera sticks to the protagonist like glue, severely restricting the range of knowledge we have access to, and the laconic exposition raises more questions than it answers. Saul (Géza Röhrig) can’t be sure himself if the boy he finds still breathing in the gas chamber is actually his son, as he never locates the child’s identity card, nor is he able to determine if the transport on which he arrived came from Hungary. (Towards the end of the film, another prisoner questions whether Saul—who’s perhaps not in his right mind—even had a son in the first place.) Another enduring mystery pertains to the female prisoner (Juli Jakab) who smuggles explosive powder to the Sonderkommandos: How does she know Saul’s name, and why does he pull away his hand when she tries to touch him? By revealing so little about Saul’s past, the film implies that life in the camp has stripped him of his individuality, reducing him to a mere cog in the machinery of genocide. 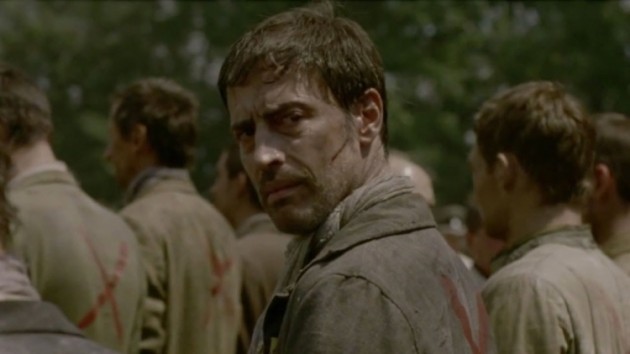 Given the movie’s reticence (to say nothing of its unrelenting grimness), one wouldn’t expect it to be getting such a wide release in North America. 1 That it has may be partly attributable to the fact that there’s a proven audience for historical dramas about World War II (Downfall [Oliver Hirschbiegel, 2004], Black Book [Paul Verhoeven, 2006], and Ida [Pawel Pawlikowski, 2013] all did respectable business on this side of the Atlantic), and perhaps more importantly, its protagonist has a clearly defined goal that drives the plot—not, as in The Grey Zone, to save the child —a Nazi doctor quietly suffocates Saul’s “son” immediately after his discovery— but to give him a Jewish burial, which is no easy task under the circumstances. First of all, Saul has to get a hold of the body, but when he goes to the camp pathology lab to grab it, not only is it not there but a coterie of doctors and German officers walk in on him before he can leave. He also has difficulty finding someone to recite the prayer. A fellow Sonderkommando who used to be a rabbi tells him not to bother—throwing the issue of whether Saul’s goal is noble or absurd into the viewer’s lap. And when he does find someone who’s willing —after getting two men killed and losing the explosive powder in the process— he’s unable to bury his son in the camp as another prisoner claims the elected gravesite is his spot.

As in a classical Hollywood movie, the film puts additional pressure on its protagonist by giving him a deadline. The movie opens with a title card informing us the Sonderkommandos were killed and replaced every four months, and early in the film, another prisoner reminds Saul their time is almost up. Later, the deadline becomes more specific when he learns his execution is scheduled for the following morning (the entire story takes place over a period of twenty-four hours), and in addition to the other prisoners’ lack of cooperation and the whims of the camp guards, Saul’s unenthusiastic participation in the preparations for the uprising serve to further retard his progress, as well as keeping the movie from ending prematurely. Early on, his co-conspirators choose him to serve as lookout while another prisoner photographs the burning of corpses for posterity, and unluckily for Saul, he does such a good job, hiding the camera in a drainpipe just before the guards catch them, that his confederates appoint him to receive the explosive powder that evening. It’s the clash between the fast-approaching deadline and the various delays Saul encounters that make the film as suspenseful as any thriller. 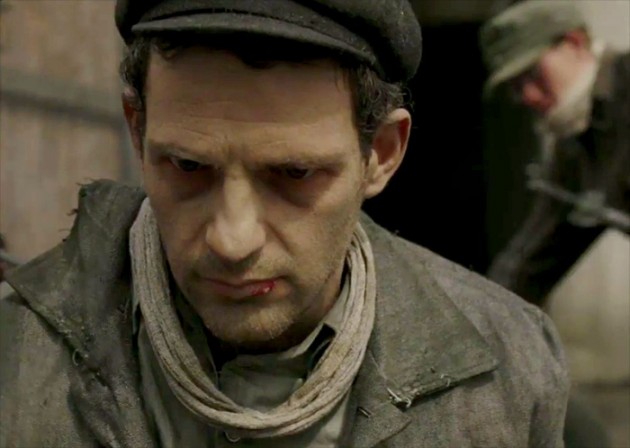 That said, an analysis of the movie’s narrative structure can’t fully account for its visceral impact. Nemes and his cinematographer, Mátyás Erdély, shoot the film largely in long takes with a handheld camera in the manner of the Dardenne brothers’ Rosetta (1999)—another movie about an obsessively determined protagonist who’s constantly on the go. But while this film has more shot-reverse shot cutting (which is to say, some)—as when Nemes cuts between the Nazi doctor suffocating the boy and Saul’s reaction as he watches passively—its style is even less communicative as some of the most important events in the story occur either in the background, out of focus or off-screen altogether while the camera concentrates on Saul, making it difficult at times to tell precisely what’s going on. In one sequence, as Saul attempts to wrangle himself a rabbi in the middle of a frenzied mob, we sense something terrible is happening just outside the frame—due to the sound of gunshots and people shouting off camera, and the huge infernal fire illuminating the scene—long before it becomes apparent what it is. And later, when the Sonderkommandos finally revolt, the tight framing and myopic depth of field make it impossible to pinpoint the exact moment when the uprising begins. To paraphrase Robert Bresson, this is a movie you feel before understanding.