Pilgrim of the World: on Liliana Cavani’s Francesco 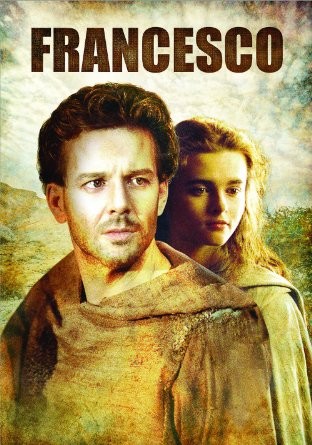 Liliana Cavani is most noted for, and will probably always be most associated with, her investigations of relationships in extremis, like The Night Porter (1974) and The Berlin Affair (1985). But she has also produced a number of terrific historical/biographical features such as Galileo and Beyond Good and Evil, which takes up the figure of Nietzsche. At the other end of the spectrum, a film on the life of Saint Francis of Assisi was, in fact, one of her very first features in 1966. The common thread here would appear to be her interest in disruptive, polarizing figures; most often those with a very particular vision not easily comprehended by others. She returned to Francis’ life some twenty years later to treat the subject in a slightly different fashion with Mickey Rourke, of all people, attached to star as the titular saint.

Rourke’s casting would seem to be perverse since, despite his ability, it’s hard to imagine him taking on this role convincingly. But he is convincing—at least, in a very specific sort of way. This is not the familiar portrait of the saint from Rossellini’s film or Zeffirelli’s. But neither is it some act of wanton revisionism for its own sake. Rourke captures astonishingly well the subtle drift of a man whose life was intended for military service as he is gradually affected, even infected, by an incremental awareness which eventually motivates him to overturn his entire life, and, by consequence, that of many others. In fact, much of what Rourke does here registers as impressive because of the commitment he and Cavani make to keeping things subdued and simply observing moments of experience that will always remain impenetrable. He inhabits this role with persuasive power, always hinting at the effort to maintain a balance between hopeful insight and frustrated disappointment. Rourke is also well capable of suggesting the latent but elusive threat to the existing social structure implicit in Francis’ character; a kind of confrontational challenge which is usually cheerfully overlooked in other presentations. Ultimately, Cavani and Rourke give Francis the respect of puzzling over him rather than simply venerating him.

If this was a surprising work of great accomplishment for Rourke (and, to a slightly lesser extent, Helena Bonham Carter as Chiara) it was just as much of one for Cavani. She makes a real effort to take Francis seriously as a personage in a very particular historical context—the overwhelming emphasis on the materialism of this world makes that point admirably—but her tone is not an overly pious one. In some respects it recalls Alain Cavalier’s great Thérèse (1986), though that film has an admittedly even more ascetic form, in that both are similar efforts by artists who are at once both areligious but also genuinely inquisitive and willing to seriously consider the legitimacy of their subjects’ perceptions. The greatest accomplishment of Cavani’s film is its remarkably steady, evenly handled approach to extreme material often met with hysteria from either side of the ideological fence. Indeed, assessing that reaction is part of her intent. The incidents in Francis’ life she depicts are presented within a flashback structure as details recounted by his friends and fellow converts shortly after his death. This has the welcome advantage of framing these incidents in such a way as to indicate their contribution to his legend. Accentuating the inflection of memory upon the accumulating flow of detail and incident allows an ironic approach to what we are seeing and hearing without an overemphasis on the importance of distanced skepticism.

One of the film’s principle interests is the way in which Francis represents a destabilizing space of chaotic possibility rather than affirmed order. He introduces that idea into his otherwise rigorously maintained society. Only something like Artur Aristakisian’s Palms (1993) compares to the incisive way in which Cavani recognizes the implications of that particular level of disturbance, its transformative force. The attention to the detail of this place in time is hugely impressive—not so much an obsession with “historical realism” as a desire to integrate the material and spiritual which skews in certain respects more toward Eastern Orthodoxy than Catholicism. It enhances the impact of the whole and is enhanced further by its confluence with other elements such as Vangelis’ superb electronic score which has the effect of creating an additional displacement of sorts within this steadily observed specific historical space. In turn, it emphasizes Cavani’s perception of Francis as a radical visionary with the propensity to be as much a man of the future as of the distant past.

A masterpiece even in its severely truncated form and worth seeing that way to hear Rourke and Helena Bonham Carter’s actual voices (all editions of the 150 minute long cut are dubbed), Francesco remains among the greatest of all religious films. There is an emphasis on the rough, textured reality but existing in tension with the aesthetic beauty of light captured and applied to lives like frescoes. But there is also the saint’s inscrutable behavior, the impossibility of full comprehension which makes a life seem then like an icon by default. The presentation is balanced but always in tension. The cut which has been longest in circulation in the US is defaced by an edit job that makes the film virtually incoherent in contrast to the grace of that long version but somehow its glories shine through and in certain respects are actually enhanced (the mysterious made that much more so —here it works and the already fragmented vignette structure helps prevent it all from complete collapse).

Thankfully, however, there is now a new edition available on Film Movement Blu-ray which restores Francesco to a length close to that original cut and, most importantly, restores the film to a state of coherence as well. And with the English language vocal track intact a much more thorough going appraisal and appreciation is finally made possible. The Blu-ray itself is very sharp and impressive, both in terms of sound and picture, though a lack of subtitles is unfortunate as so much of the dialogue is hushed and not always easy to discern. Still, this must be the best overall presentation of the film short of theatrical release. The only extra on the disc is a brief excerpt of the Cannes press conference with Rourke appearing as though he’s just stepped off the set of Wild Orchid (which is very possible). It’s not the most enlightening of extra features but what is lacking there is made up for in the accompanying booklet which features excellent essays by both Cavani and critic Aaron Hillis. Certainly a must own disc that will introduce this fine film to wholly new audiences and those seeing it in its restored form for the very first time.