As part of their Special Presentations at the 2020 Virtual “COVID-19” edition of the Festival of Nouveau Cinema (FNC), they presented several retro titles in varying states of restoration, including Dennis Hopper’s American Independent classic Out of the Blue (1980, sadly to partly commemorate the tragic death of its co-star Linda Manz who died just shy of her 59th birthday on August 14, 2020), The Shining, Mad Max—The Road Warrior, and the great Quebec film classic, Les Ordres (1974), directed by former genius cinematographer of Quebec’s Cinéma Verité movement, Michel Brault. During October of 1970 the F.L.Q. (Front de Libération du Québec) kidnapped government ministers Richard Cross (United Kingdom) and Pierre Laporte (Quebec). At 4:00 am on the night of October 16, the Canadian Government invoked the War Measures Act, which gave police officers unlimited powers to arrest any citizen suspected of illegal activity, “real or apprehended,” and keep them incarcerated for up to 21 days without charge. In preparation for the film, Michel Brault interviewed over 40 of the 465 people who were arrested under this Act, which gives the film its raw, documentary edge which Brault modulates with touches of stark poetic imagery. Like the opening empty frame shot of a classic Montreal-styled apartment court backyard which establishes the dull quotidian reality which would soon be shattered by unexpected Government action. The rigid symmetrical framing and huis clos space of Brault’s camera foreshadows the theme of imprisonment. 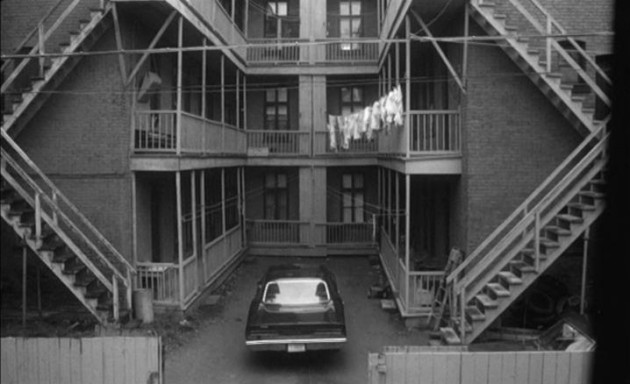 The collective experiences of the 465 people are synthesized into five characters, who recount their individual ordeals in a flashback interview style. They are Clermont Boudreau (Jean Lapointe), a union representative who works at a weaving mill; Marie Boudreau (Hélène Loiselle), a housewife, who is Clermont’s wife; Jean-Marie Beauchemin (Guy Provost), a doctor in charge of a community health clinic; Richard Lavoie (Claude Gauthier), an unemployed worker tending to his young son while his wife works night shifts as a waitress; and Claudette Dusseault (Louise Dussault), a social worker. Brault “universalizes” the event by avoiding any references to the October Crisis. While this decision accentuates the Kafkaesque nature of the experience, it also de-politicizes the event. Although Brault was criticized for this in certain Québec circles, most notably by notorious Separatist journalist/writer Pierre Vallières in his 1975 review “Brault a manqué son coups” (Cinéma Québec 4, no. 1, 18-20). Meanwhile the then leader of the Parti Québécois Party René Lévesque gave it a positive review, even if he acknowledged that it did not seek to unearth the causes of the acts. Viewers removed from the hotbed of Québec politics tended to see the film differently. Vincent Canby writing in The New York Times on May 6, 1977 called the film “an angry, beautiful French-Canadian film,” and saw it as Brault intended it, a warning about the fine line between democracy and totalitarianism. He wrote, “Les Ordres is not about French-Canadian liberation…it’s about the terrifying speed with which democratic processes can be liquidated and even more about the psychological effects of imprisonment.” Indeed in one scene the stay at home father Richard Lavoie calmly changes his baby’s diaper on the kitchen table while the cops snoop around the apartment. This and other scenes of the police officers barging into the homes without any explanation recalls similar scenes from the opening of Orson Welles’ 1963 The Trial. 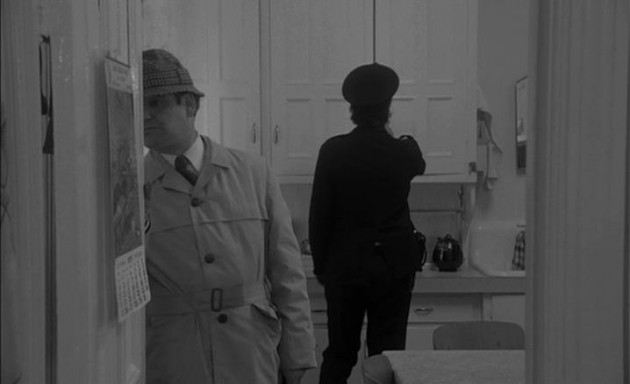 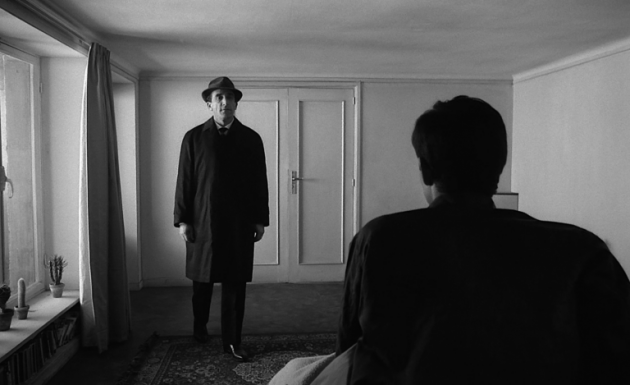 While Brault does not take an overt political position, there are clear signs of political intent. For example, is it a coincidence that of the five people Brault selects to represent the victims, one is a union leader, one is a socialist doctor, one is a social worker and one is an unemployed single father? There is no sense here of Brault being on the side of the authority. And Brault makes striking use of several factual title cards that have the impact of a blunt object, including the irony-drenched opening quote from a young Pierre Elliot Trudeau, the Canadian Prime Minister, who would be the one 16 years later to invoke the War Measures Act (and as I write this Pierre-Elliot’s son Justin Trudeau, the leader of the Canadian Liberal Party and current Prime Minister of Canada, has just been re-elected for a second term as minority leader of Canada):

Whenever any form of authority unjustly abuses a man, all the other men are also guilty; for it is through their silence and consent that they permit the authorities to commit this abuse.

Outside of the brief ‘faux’ interview scenes, where the actors introduce themselves in their fictional roles, there is very little here to remind the viewer that Brault was one of the founding figures of the cinéma direct movement (Michel Brault left us on September 21, 2013 at the age of 85). The film adopts a somber yet exacting, highly controlled style which serves to underscore the collective loss of control felt by the victims. The soundtrack consists only of sounds (clanging prison sounds for example) and diegetic music. Color is intercut with black and white for thematic and ironic effect. Black and white is used exclusively for scenes outside the prison, and color is used within the prison walls, which activates a “modern, clean, cold” prison atmosphere. This color and black and white decision by Brault shows his individuality as a stylist, as he resists what might have seen the more obvious choice of switching the color pattern to depict the prison in black and white, echoing for example, the totalitarianism of style like George Lucas’ THX 1138. According to Bill Marshall the mix of color and black and white was due to a lack of funding for complete color (similar to the cause of it in Lindsay Anderson’s If, 1968), but this, if true, does not deny that aesthetic choices were still made by Brault (Quebec National Cinema, p. 40). 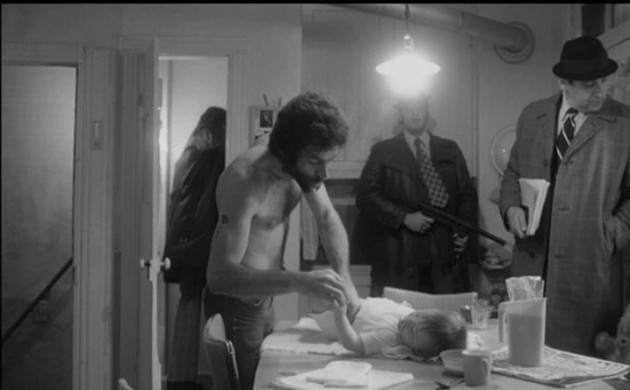 Most of the camera movements are smooth, precise dolly and tracking shots that reflect a sense of control and order. One of the few times Brault uses a hand-held documentary-like movement is when Marie Boudreau (Loiselle) is freed and the camera follows her jubilant run down a prison corridor. The film concludes with a dramatic crane shot which moves from Clermont Boudreau (Lapointe) on his balcony (the specific), scaling up the building to the roof of the apartment building looking out over the city (the general). At the start of the crane movement we hear Dr. Jean-Marie Beauchemin’s (Guy Provost) voice-over stating, “What happened to us may have been minor but what is important to realize is that it shows that there is something rotten somewhere and we must not let the sickness spread.” Les Ordres succeeds as a nightmarish depiction of an individual’s helplessness against totalitarian state authority. Knowing that this scenario took place in Montréal, Les Ordres leaves us with the discomforting feel that any political system, democracy included, has a point at which order and self-preservation take precedence over individual rights and civil liberty, something alluded to in Beauchemin’s final voice-over. Les Ordres garnered the Best Director prize (tied with Costas-Gravas) at the 1975 Cannes and four awards at the 1975 Canadian Film Awards (Best Feature Film, Film of the Year, Best Director and Best Screenplay).

It is hard to chart this film’s legacy outside of the obvious hugely important role of Michel Brault as a pioneering member of the Quebec/NFB cinema verité movement of the late 1950s and 1960s. As Jerry White has said, it is hard to imagine Quebec cinema without the contributions of Michel Brault. The film itself is unique in the way it splits itself between a documentary understanding of the real political events and a more expressive, poetic treatment of the more obviously fictionalized scenes of incarceration. There is one film which I see as being greatly influenced by this dualistic style of Les Ordres, and that is We Were Children (2012, Canada, Tim Wolochatiuk), which dramaticizes one of the blackest marks on Canadian social history, the residential schools. The residential schools were state run religious schools that were administered from the 1880s to as late as 1996 and were mandated to “re-educate” generations of Indigenous children into a Christian education. Funded by the Canadian government’s Department of Indian Affairs and administered by Christian churches, it was mandatory for Indigenous families to release their children to school residency for the duration of their education. In an effort to completely assimilate them into Christian society children were forcefully denied their language, culture and customs, often to the point of physical, sexual and psychological abuse. The full extent of the horrors that went on inside the walls of these residential schools is only now coming to full light. Most recently in 2021 with the discovery of over a thousand unmarked graves on the grounds of residential schools across Canada. 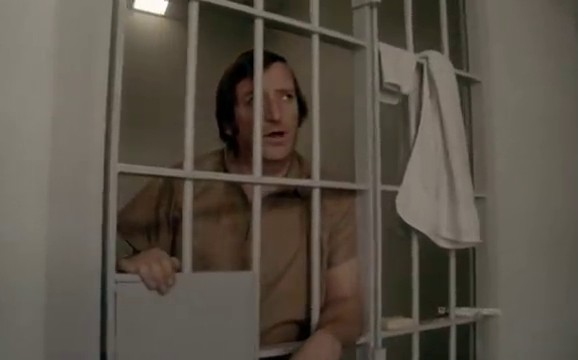 The director of We Were Children Tim Wolochatiuk emulates Brault’s approach by interviewing two residential school survivors, Glen Anaquod and Lyna Hart, as they are today, recounting their experiences as children in the residential schools. Their stories are dramatized through period flashbacks featuring actors playing their younger selves, told in unflinching and brutal honesty. Like in Les Ordres, the film uses a few victims to stand in for the many and ‘imagines’ the real events with artistic clarity. Interestingly, the scenes of the victims of the War Measures Act being processed in prison, with their clothes removed, hair and facial hair cut, possessions removed, and humiliated, oddly mirrors the similar scenes of children being processed upon arrival at the residential schools in We Were Children. Other parallels exist across the two films in how the children and civilians were mistreated in the schools/prison, such as emotional and psychological games they would suffer. In We Were Children Glen recounts how he was told to prepare for a trip home and instead was taken to another building on the school grounds and locked in isolation for three days. In Les Ordres the unemployed father Richard Lavoie recounts how he was told by a guard that he would be executed in three days, and subjected to a staged execution before realizing it was a perverse exercise in power. The slow tracking shot along the prison cells while Clermont Bourdeau (Jean Lapointe) sings a mournful song lamenting his father’s death has the timber of a church choir, which in its religious invocation reminded me of the setting for We Were Children. Not that I am suggesting that the events of these two films can be compared, since one has had far graver consequences, but it is interesting to note how Les Ordres and We Were Children, made some 42 years apart, recount two dark events from Canada’s past using similar styles of blended documentary realism and fictional drama which are a product of the National Film Board of Canada’s rich legacy of documentary art. 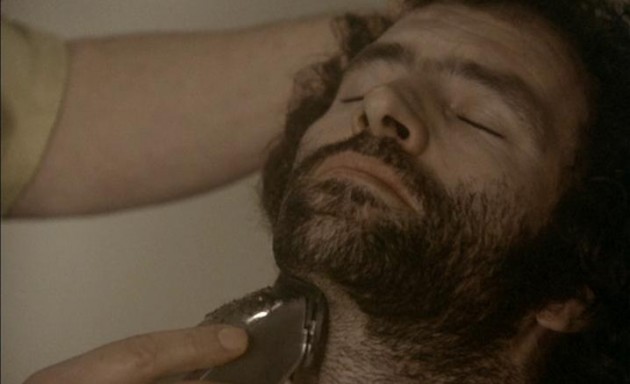 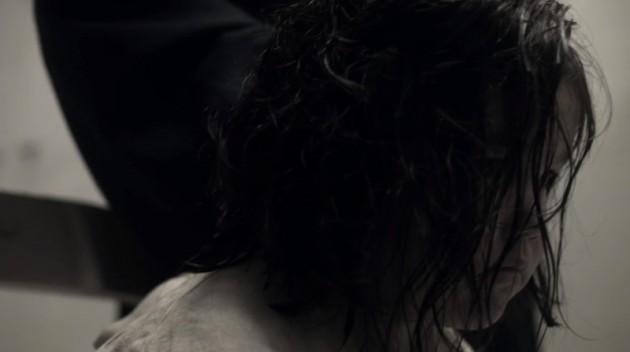 Les Ordres & We Were Children

For an excellent summary of the history and social importance of Residential Schools I recommend this resource, The First Nations & Indigenous Studies, from the University of British Columbia.