Kiss Me Deadly: A Conversation About Love in Fourth Gear

Translated from its original French by Olga Montes

— I was thinking of perhaps writing the story of the woman, the one in the movie. She would write a letter to the man with the moustache. She would say that she had had a dream about him, and would recount the film as the dream she had had. Although she wouldn’t be quite certain if it had been a nightmare or even, possibly, an old memory faded with time, she would feel overwhelmingly and uncontrollably driven to share the dream with him. I have the beginning: I believe that Binoche was right in Mauvais sang (Bad Blood), even if, in this case, it was not love that awakened me. But I did dream of you.

— You mean… a kind of love letter?

— Not exactly. Perhaps a letter of disenchantment, a letter that would free him from the ghosts of the past, a farewell letter, like in the film… A gesture of loss, something that would lead to his demise, the last of the last kisses. A second option and perhaps more plausible because it is less literary: An imaginary dialogue between two people about this film. Better: A clumsy exchange regarding what they have just seen. They would talk about love, too. But in another way… less connected to Luis Macias’ film. They would talk about the nature of that kiss. It would quickly turn into a conversation on the horrors of romantic love, love that fuses and identifies, love that erases, that destroys, that rips out the gut… that kills. Without realizing, they would talk about the formal aspect of the film. Yes, about the pulsating white blur where confusion, an obstacle to understanding love, takes shape.

— Maybe even a form of genesis or apocalypse… after all, it seems to me that this film stems from the work of the Lumière brothers.

Author’s Note: It is important to point out that by exaggerating their naivety, the characters offer an interesting, if incomplete, portrayal. This is a film by Edison and not by the Lumière brothers. Luis Macias presents The Kiss (1896), the original film, using different projectors, filmed by several dozen different cameras.

— Yes, of course! That was my third option: Based on Chris Marker’s La jetée or Sans soleil. A first person narrative in an imagined world, without memories, without recollection, without images. The narrator finds this piece of film and develops it, then watches it over and over again to try to understand its meaning in a civilization that no longer exists. It would be as if he or she understands nothing about these images, knows nothing about these humans, their customs or their social conventions. Moreover, he or she would not know how to react to the shift from figurative to abstract. The narrator would be afraid, yes, mortified to come across an ephemeral object that must quickly be understood, grasped in a hurry before it disappears. He or she would not understand if these humans were confiding in one another, loving each other, thinking, playing or simply being themselves. The narrator would see everything as complex. Question everything, every gesture, the kiss, when the man – if indeed a man – smooths his long moustache; when the woman – if indeed a woman – watches him joyfully yet desperately. The narrator would question the film’s medium, its textures, how fragile these shaky images are, as they fade and disappear.

— You could even try to think… to insert this image… Now this is getting a little meta… Yes, imagine this film in other films. What would happen if a specific character in a film saw this image, if this image were seen by a fictional character?

— I mean… What would happen if this film were inserted into another film and the characters were asked to comment on Luis Macias’ film The Kiss? Suppose it was a commentary by characters from other movies… Imagine, for example, Gena Rowlands and Peter Falk commenting on these images in a Cassavetes film, or Sigourney Weaver, alone in her spaceship in Alien. What would happen if this film were seen by characters in another movie? 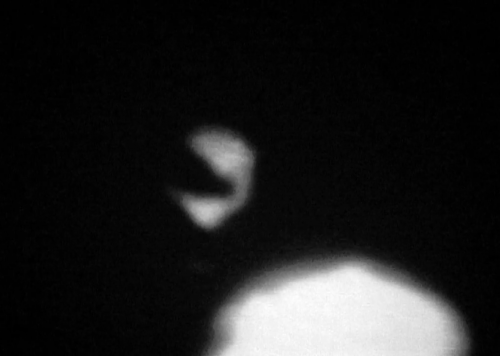 — It is easy to imagine the impact of this film on our friends or family… We can interpret this work using texts, a theory, a concept, and imagine what a psychoanalyst with a deep-seeded contempt for patriarchy might think of this very abstract film. But, you’re right, we rarely consider the possibility of thinking about a film as per a fictional character’s psyche. In doing so, would we perhaps learn more about that particular film or about the film from which the chosen character is derived? Is seeing that film as Weaver in Alien… would that shed some light on Ridley Scott’s or Luis Macias’s film? Or, if we push it even further, it might be fun to imagine what some celebrities, such as Che Guevara, Kim Jong-un, Britney Spears, and others might think while watching such a film.