At first glance, it would seem that pornography and the slasher film share little in common as genres — if anything. The former, a totally unsimulated exhibition of our wildest sexual fantasies and desires; the latter, a theatrical reproduction of violence, mayhem, gore; our most incogitable fears. Yet, beneath these cursory, surface-level readings of the categories, a strikingly long list of similarities can be drawn. For one, they are both physical genres. The senses and the body are their focal points. Additionally, the viewing experiences are intentionally cathartic. Human beings possess desires, urges, needs; some more benign than others. These impulses can be managed through social conditioning and legal retribution, but can never be extinguished entirely. All things considered, pornos and slasher films are arguably two of the most effective and relatively harmless means of satiating our natural inclinations for sex and violence.

The language we use to speak of our libido and of our propensities for violence is unquestionably religious. Of recent, this applies less to sex than it does violence; still however, the conversations surrounding both border on zealotry. Our desires are to be internalized — that is to say, we must not be led into temptation. And the measures taken to regulate our alleged inner-demons do not begin and end with social doctrine. Violence is policed in the most literal sense. In most forms, it is punishable by law, even between consenting adults. As for people’s sexualities, historically they have been stringently kept in line — and still are in parts of the world. Yet in spite of the West’s recent openness to previously prohibited sexual preferences (e.g. homosexuality, bisexualtiy, pansexuality) institutional structures continue to encourage certain sexual behaviours over others. For instance, tax benefits for common law couples indirectly discourage non-monogamous or short-term relationships. Of course, people are free to participate in polyamorous relationships — just as they are free to live in the remote wilderness if they are so unhappy with urban or suburban life — but most do not precisely because there are socioeconomic costs to be paid. The gender or race of one’s partner is (generally) no longer of tremendous concern, but quotidian life is still sociopolitically predicated on finding one permanent companion. Thus, individuals commonly find themselves caught between their biological impulses and social conventions.

Ignored in this moralistic dogma is that humans possess appetites for sex and barbarism by nature. We are inherently sexual creatures. Violent, too. Perhaps more than we are sexual. Powerful, zealous religious bodies have managed to keep sexual behaviours in line throughout history. Not totally, but inarguably to some degree. Yet even at the height of its power, the Catholic church could not stop people from ripping each other to shreds. In fact, it would seem the institutions whose mission it is to maintain peace (e.g. organized religions, states, law enforcement) are most responsible for violently disturbing it. Even the most unbridled of optimists among us cannot deny that historically, human beings have repeatedly allowed their most wicked and savage tendencies to get the best of them.

For better or worse, sex and violence are a part of us, and the social straightjackets in which we live cannot change this. Media plays an enormous role in marginalising graphic content — thus making it difficult for people to find outlets for their cravings. In mainstream media, consumers can access simulated images of gore or explicit sex with relative ease. At any given time, theatres are screening films containing graphic or explicit content. As for the unsimulated, these images are so marginalized they are effectively barred from any mainstream public venue. Take hardcore pornography, for instance. There is a metric ton of institutional and cultural capital dedicated to the production, presentation, and preservation of the mainstream arts (music, film, visual arts). Pornography does not possess a fraction of these resources. As an art genre, pornography has more or less been left to its own devices. This in spite of the fact that pornography makes up approximately 30 percent of all data on the web (The Huffington Post, 2017). Remarkably, it would seem that pornography is one of the few exceptions to the neoliberal rule; in that its commercial success is not enough on its own to endow it public legitimacy. No amount of market viability can free the “adult film” from the curtained-off sections of video stores, and society at large.

Even if these sites generate negligible amounts of traffic relative to porn sites, it shares a genetic bond with its X-rated sister sites. They are unbridled, they are honest, and they are direct. Moreover, the two will likely never overcome their marginalization in the media ecosystem, regardless of how many eyeballs they attract. Looking into these sectioned-off media industries can reveal telling truths about the parts of our world which we do not conceal. The division between publicly tolerated, mainstream media; and the subterranean airwaves of carnal entertainment is not along any coherent lines, really. If we revere art for its popularity, then why does media, academia, and the general public still speak of it in hushed whispers? If we esteem authenticity and truthful explorations of the human experience, why is violent content so stigmatized, even morally admonished?

Barry Komisaruk is a neurologist at Rutgers who studies the brain during orgasms. Her research concluded that orgasms act as painkillers in the brain. That is, orgasms and sexual stimulation actually increase our pain tolerance. She had a machine which squeezed people’s index finger, the subjects can stop the machine’s application of force when they deem it to be too painful. She had them do the same experiment, only while masturbating. In the second case study, subjects’ pain tolerance increased by nearly 50 percent. Moreover, a PET scan done by a group at the University of Groningen concluded that orgasms may even cause the brain to shut down our fear and impulse controls. Similar to what happens to our brains when we fight, attack, or are being attacked (Stromberg, 2015).

Thus, similar to “horseshoe theory,” a political theory which suspects the tips of the political spectrum — i.e the far-left and far-right — resemble each other more than they differ, the aforementioned studies would suggest that a similar rule applies to the human senses. Sexual stimulation and physical agony, even if one would sensibly conclude are polar opposites, may actually compliment each other. And for some, pain is inextricably part of their sexualities.

In slasher films , the killers’ lust for violence is a substitution for their absent sexuality. The opportunity will arise for the killer — be it Michael Meyers, Jason Voorhees, or Leatherface — to have their way with victims. And the abducted are always aware that they may be sexually assaulted, or even raped. But this never crosses the minds of the executioners. That their victim has anything to offer them other than raw flesh is an alien concept. The killers in slasher films are the quintessential sadists; all punishment, no sensuality.

One of the earliest examples of the sadistic killer — in the most literal, psychosexual sense — is Mark Lewis (Karlheinz Boehm) in the 1960 British horror film Peeping Tom (Michael Powell, 1960, UK). His fixation on his camera, on fear, and on death, are deliberately conflated with a libido. His first victim is a sex worker whose services he purchases. But the only way their contract can satisfy his needs is if he kills her — which he ultimately does. Mark fundamentally misunderstands the arrangement between sex worker and patron because of his erotophonophilia. Sadism is not an aspect of his sexuality, it is his sexuality. Moreover, his collection of home videos — that is, videos capturing his victims’ expressions moments before their deaths — is stashed away in a curtained-off section of his apartment. He is aware that his behaviour is socially abhorrent, but this does not discourage his behaviours, it only forces him to conceal it.

Conversely, Marie (Cécile de France), in Haute Tension (Alexandre Aja, 2003, France) is both a sadistic killer, and a masochist. Her lust for Alex (Maïwenn) is so suppressed that she eventually erupts in a killing spree. Marie experiences both a psychological and psychosexual breakdown, in which she hallucinates that it is not her who kills Alex’s family, but some haphazard, rugged-looking home-invader. The murders of Alex’s family are less erotophonophilic episodes than they are psychotic fits of rage against years of internalized sexual desires. Yet there is a scene near the film’s conclusion where Marie kills the imagined killer. The sequence is excessive in its gore and carnage — she bludgeons the fictitious man with a barbed-wire wrapped baton over a dozen times. And to finally kill the beast, she mounts him and suffocates him with plastic film. In a futile effort to save his life, the man strangles Marie from the bottom. In this battle-of-wills sequence, Marie’s body sways back and forth, she moans while struggling to breathe; and when her hallucination finally dies, she screeches out a quasi-orgasmic cry. This self-harming — as she is ultimately inflicting this pain upon herself — scene is quite obviously sexualized, and raises interesting questions about her masochism. Has the marginalization and repression of her sexuality led her to direct her rage inwards? Or is Aja’s film making a more conservative, antiquated judgement about homosexuality as an uncontrollable paraphilia.

The intersection of sex and violence is inextricably part of the slasher film, even if we have not fully rationalized to what extent the two are connected. In fact, there is even an entire genre; the pornographic slasher, dedicated to this conjunction between the senses. The American film production house, Toetag Productions, is dedicated precisely to this. The violence and sex are intertwined and needlessly excessive. Conversely, there exists an enormous subgenre of BDSM pornography, where pain and humiliation are integral elements, and the lines between pleasure and pain are even further blurred. These extreme genres may be unpalatable, even disturbing, but their honesty is undeniable. They are inquiries into the depths of our primal urges, desires, and cravings, and how we act upon them in spite of societal guardrails. 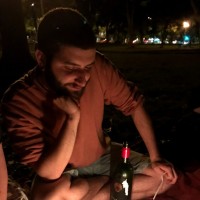 Giulio Evangelista is an undergraduate student specializing in Film Studies at the Mel Hoppenheim School of Cinema. His research focuses on the democratization of intellectual and technological capital in the postmodern era. His work has been published in Offscreen and The Concordian. Outside of the arts, his interests include media studies, foreign affairs, and all things combat sports. You can follow him on Twitter.