Many horror films made predominantly in the 1980s and 90s depict television sets as terrifying entities and metaphysical portals. In these films, fear is evoked through revealing the dissonance between our psychological perception of reality and the fantasies that exists within the constructs of televisual technology. Isabel Pinedo writes, “A film is not only a time-bound experience, it is also an imaginary one. The screen constitutes the spatial frame on which a film is projected. It marks off a bounded reality, one that need not conform strictly to lived experience. The borders of the screen establish parameters that free the viewer to engage in fantasy” (Pinedo, 27). Although television fits this characterization of film as a time and space bound experience, it has many medium specific characteristics that distinguish it from film. On a structural level, film is composed of tiny grains mediated by shadow that are largely undetectable, while television is fluorescent light being projected through a cathode tube, the resulting image being traditionally made up of faint horizontal lines (Renan, 241). Along with its structural features, its position in the domestic realm as well as certain stylistic and formal conventions that are unique to televisual broadcasts have a different impact on audience identification. By dismantling the expectations of television’s formal and structural conventions as well as physical properties, TV is exploited in cinema for its uncanny and horrific potential.

Before the horror genre interpreted televisual form and technology, structural filmmakers in the 1960s had already realized the reflexive possibilities of the medium. Structural film liberated experimental filmmakers who took issue with the conformity that mainstream film’s form and conventions represented (Renan, 227). Television representing a similar message, its formal qualities were similarly suited to avant-garde critique. Filmmakers like Alex Hays and Robert Whitman used television projectors and digital manipulation afforded by the medium to achieve a different aesthetic than that which articulates film (Renan, 241). This new aesthetic was used by Robert Whitman in his performance piece Two Holes of Water -3 (1966) in which closed-circuit television footage is projected and uncharacteristically enlarged. In “An Introduction to the American Underground Film” Sheldon Renan writes, “When blown up to ten feet tall, the normal television image becomes one of a foggy dream. Paradoxically this dream looks more “actual,” more like it is really something happening than anything on film.” (Renan, 241) Structural film is a precursor to how the horror genre emphasizes physical and technological properties of the medium in order to undermine audience expectations. 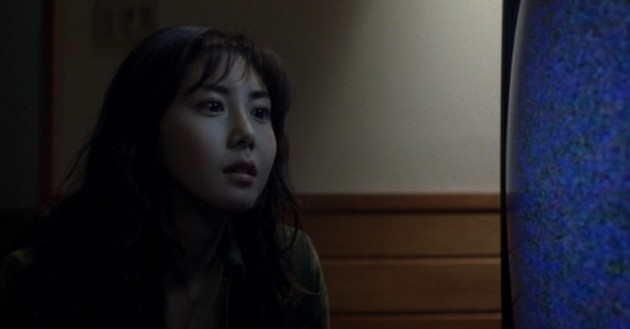 Horror films that emphasize the structural properties of television include, Poltergeist (1982), Ringu (1998), Videodrome (1983), The Video Dead (1987) and Terrorvision (1986). In these films structure is stressed both in how they represent televisual text and in how they depict the television set itself. In “the Face of Television” Paul Frosh writes, “It is this idea of a backstage location behind the screen whence the pictures come that supplies some of the uncanny effects of television as a separate, horrifying world that is more than merely virtual,” (Frosh, 96). In Poltergeist, a static filled TV screen is a portal into the spirit realm that first allows Carol Ann to contact the undead. Terrorvision and The Video Dead see a distorted and noisy screen transition into a passage that allows monsters into the human dimension. In Videodrome, the black plastic container for the cathode tube takes on flesh-like qualities and the wavering fluorescent stripes of the screen’s surface are afforded a number of close-ups.

In all of these films three distinct visual states of a television’s surface are featured: 1) The TV set is either off, in which case the image on the screen is a slightly distorted and darkened reflection the room in which it resides, 2) It is on, in the process of playing video, 3) It is displaying static, or, visual noise which is defined by Miriam Webster as “An unwanted signal or a disturbance (such as static or a variation of voltage) in an electronic device or instrument (such as radio or television).” While the first two can be coherently understood via their familiar self-descriptive process, there is no coherent symbolic value attached to televisual noise beyond its existence as an idiosyncratic flaw. The unknown and unwelcome implication of noise, paired with its specificity to the medium and abstract visual quality justifies its use in horror as an interstitial technological space for a metaphysical event to emanate from. 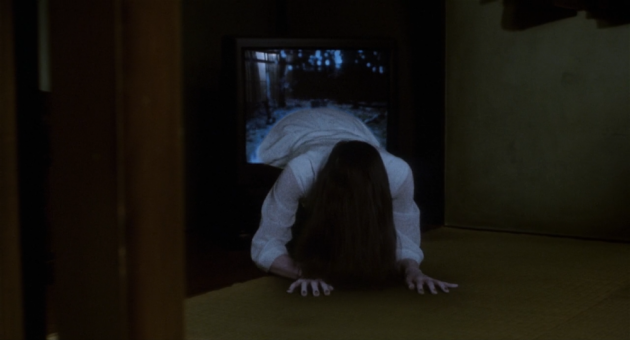 Due to these structural properties and the space that televisions inhabit in many homes, their potential as a threat to the self is exploited in Ringu (1998) by way of how the film radically subjectifies this seemingly innocuous technology. After the protagonist, Reiko Asakawa, first watches the cursed videotape, the TV set shuts off and we see the long haired ghost of Sadako standing behind her in the screen’s reflection. Subsequently when Reiko turns around, she is no longer there. Katarzyna Antuna writes, “Still, catching a momentary glimpse of the world reflected on the surface of the screen and separate from the ‘world’ inside it, we are reminded of the physical limitations of the apparatus, which, even though it might be referred to as the ‘magic box,’ nevertheless remains first and foremost a ‘box’” (Antuna, 28). When the cursed video which occupies the entire frame ends, we should be comforted by these physical limitations as they reveal the artifice of the nightmarish tape. However, this logic is undermined by seeing Sadako reflected in Reiko’s living room, corroding the psychic and physical space between the real and what is represented on the TV’s screen.

Over the course of Ringu, dormant black televisions haunt the film’s mise-en-scene that are afforded emphasis through their contrast to the characters’ lighter coloured homes, through how they often foreground the characters so that they appear diminutive in comparison, and by frequently framing the characters’ reflection in the screen as if entrapped by the technology. The inescapable presence of the TV set becomes a physical reminder of the characters’ doomed fate and its function as a gateway for Sadako’s entrance into their world foreshadows the iconic scene in which she crawls through its glass threshold. Through this mise-en-scene and Sadako’s appearance on the screen’s reflective black surface, the TV set goes from mundane to ominous and otherworldly. Medium specific technology and form is emphasized from outset of Ringu as mysterious, immensely powerful and foreboding, with an opening shot of a chaotic and turbulent ocean that transitions to an extreme-close up shot of the grain of a colour television.

The relationship between the physicality of television and the self is also explored to disturbing lengths in Videodrome. In Videodrome, Max Renn’s grotesque mutations are as much caused by TV as they are a reflection of the inextricable power that the technology has over his consciousness and psychic reality. Before he becomes disfigured as a result of watching the Videodrome signal, Max’s life already revolves around television (Benson-Allot, 78), the conversations he has and his career as CEO of Civic TV are clear narrative examples. The medium is further emphasized in the physical space that his TV set occupies as the centerpiece of his apartment, a mise-en-scene augmented by the fact that his blinds are always drawn, denying any natural indication of time or place. The glow that emanates from the television is the dominant light-source that dictates the contours of the people and objects inside of his apartment. The soft otherworldly red or bluish light that it projects onto the characters’ faces is a reminder of its constant presence just beyond the frame, even when focus has shifted to a conversation. As a result of the use of television as a diegetic light source and the spatial layout of the set, Max’s apartment and by extension, he, is depicted as already dissociated from any kind of natural order. 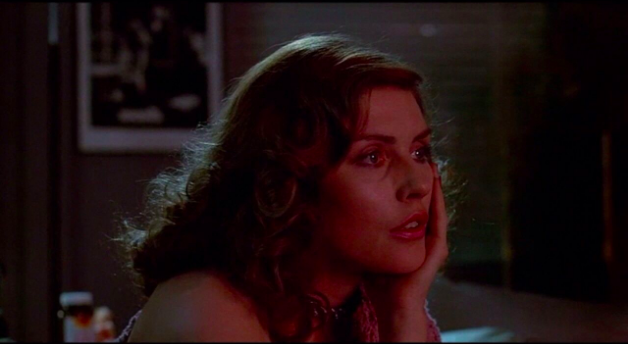 The parameters of how the screen is understood as a container for a “bounded reality” (Pinedo, 27) are violated constantly in Videodrome, how this manifests in body horror is exemplary of the uncanny potential of television. Through Max’s hallucinations caused by watching the Videodrome, television is monstrified in grotesque physical detail as it takes on human characteristics and as he in turn transforms into a techno-human hybrid. The uncanny qualities of Max’s television as well as his body are obvious — what could be more unheimlich/unhomely than a pulsating VHS that looks like human flesh, or, a gun made of skin being painfully extracted from a gaping chest cavity. The ontological barrier between human and machine and its relationship to the physical boundary between reality and television’s mediated fantasy is breached through the grotesque and technological nature of Max’s hallucinations.

Televisual form simulates reality and gives the viewer a sense of intimacy in physical and formal ways that film does not. Sheldon Renan writes, “The quality of the image is different. The quality of the television image is of immediacy, and never of spectacle (film); of flow, and never stability (film). Films are frequently run on television, but then their effect is not of film, but of television” (Renan, 241). One of the formal conventions of immediacy that is heightened in Videodrome and The Video Dead is the simulation of eye contact that works to invite the viewer into a program where a moderator, such as a sports commentator or a talk show host, addresses the audience directly (Frosh, 91). This is taken to a horrific extreme in Videodrome when Max’s girlfriend Nicki appears on his TV addressing him by name and he begins to attempt sex with the machine. In this instance, the physical, psychological and emotional significance of televisual form is horrifically emulated and satirized. This is similarly exploited in The Video Dead, when Henry speaks to the mysterious television and the man on the screen replies “You don’t know what your dealing with!” only to have zombie hoards emerge from the same screen shortly after. In both films, the proximity that separates human connection from televisual representation is completely eliminated when the TV set begins to manifest human traits in the physical realm. In Videodrome the television’s surface exhibits flesh-like veins and movement, and in The Video Dead the television is often framed dripping in blood, almost as if it is being shed by the machine itself. Audiences that are accustomed to television’s structural conventions are not only disturbed by blood, zombies and amorphous flesh but by how these films transgress expectations of televisual logic.

The medium of television when thematized in horror exploits its conventions that simulate reality. This creates fear in Ringu, Poltergeist, Videodrome, The Video Dead and Terrorvision through the audience’s own threatened state as a passive viewer whose perceived separation from events depicted on television instead makes them vulnerable to terrifying attacks on their autonomy and domestic space. In all of these films the apparatus of television is made uncanny through alterations made to the physical properties of the screen, the plastic structure which contains it, and its proximity within the characters’ domestic space. In films that position the TV set as an entryway into a powerful and sinister beyond, formal emphasis on televisual structure rattles any complacent relationship one might have with the medium.

Ancuta, Katarzyna. “Ringu and the Vortex of Horror: Contemporary Japanese Horror and the Technology of Chaos.” Asian Journal of Literature, Culture and Society 1: 23-42.