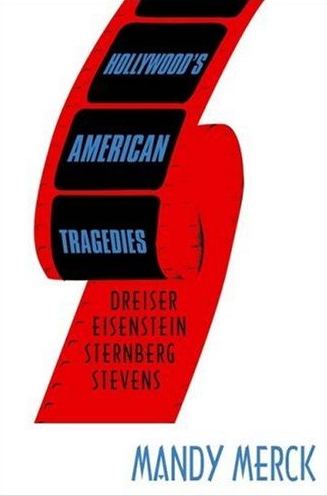 Theodore Dreiser’s ‘great American novel,’ An American Tragedy, has been the subject of much analysis but is largely forgotten amongst the wider public, save as the inspiration behind the much-loved melodrama, A Place in the Sun (George Stevens,1951). Professor Merck’s ambition for this volume is expressed here as a desire to construct a textual history of the work in all its forms, but she does much more than this, weaving an intertextual examination of a cinematic novel whose very existence is owed to Hollywood, as we discover.

Dreiser was a great naturalistic writer (in the tradition of Frank Norris) whose novels tended towards determinism, economic critique and sexual realism. His own personal life being something of a moral morass, it was his serial infidelities, sexual profligacy and the acting ambitions of his latest (and much younger) mistress that brought him to Hollywood in the early days of the industry and led him to writing his best-known work. His many attempts at screenplay sales proved futile while jealousy of his companion ate away at him and caused him to write at least one salacious article detailing the virtual prostitution of the young women in the film industry who were obliged to service their paymasters. (Ironically but hardly surprisingly, his criticism of the movers and shakers would estrange him somewhat from the business.) Withdrawing from that charged scene to begin writing An American Tragedy the novel would derive not just from Dreiser’s recollections of his own ambitions as a young man, but also from a number of well-publicised crimes of passion, notably the 1906 Chester Gillette case, which the plot of his book closely resembles. However he was also heavily influenced by a number of films of the time, including Way Down East (Griffith,1920) as Merck describes. Finally published in 1925, the novel was a huge critical and commercial success – much to Dreiser’s surprise. It immediately attracted Hollywood’s attention, where, the author declared, von Stroheim would be his director of choice. Adapted first as a play, it was purchased by Jesse Lasky who informed Dreiser that Griffith would be the more likely candidate to direct. Merck traces the complex business dealings arising from publication and film options and Dreiser’s involvement throughout.

Dreiser’s anti-capitalist writings were much admired in the Soviet Union and he accepted an invitation to speak there after the novel’s publication. Travelling there in 1927, he discovered that the state-funded film industry was part of the Department of Education and he wrote of the control being political as opposed to moral. After a period in Europe during which time he met James Joyce (when a film of Ulysses was mooted) Eisenstein travelled to the United States in the summer of 1930, with the intention of studying sound technology, which, he was convinced, was the whole future of cinema. The great and the good of Hollywood were already convinced of his genius so it was no time before he was offered contracts. He accepted Paramount’s offer and, working with Ivor Montagu, set about preparing to work on a Bauhaus-inspired project, The Glass House and an adaptation of Blaise Cendrars’ Sutter’s Gold, which few seemed to recognise as Greed (Von Stroheim, 1924) in another guise until B.P. Schulberg pointed it out. Jesse Lasky was close to Dreiser’s publisher Horace Liveright, who was going through a tough time financially. Lasky persuaded Eisenstein’s group to take on An American Tragedy, but their time in America was fast running out. Eisenstein’s approach – a materialist, ideological one – is traced by the author as an attempt to “clarify the true tragedy of the novel” (48) in which resultant melodrama the male’s role is revealed as the female’s. Merck’s account of Eisenstein’s working methods is invaluable, as the subject matter is transformed into cinematic narrative, including his usually unsympathetic attitude to “unmotherly women” (50) and a strategy of alternating viewpoints. Eisenstein elected to mostly omit the lengthy trial which dominates the latter part of the 800-page book, preferring to focus on politics. Paramount’s reaction to his work was exultant – it was the best scenario they had ever received, Schulberg boasted. However Eisenstein’s interpretation would never be produced: capitalism could not be found guilty of murder, even in a democracy. The red-baiting so characteristic of the late 40s was already present and the director’s presence in the country was being challenged while the studio was being denounced for treason: Eisenstein had to go. 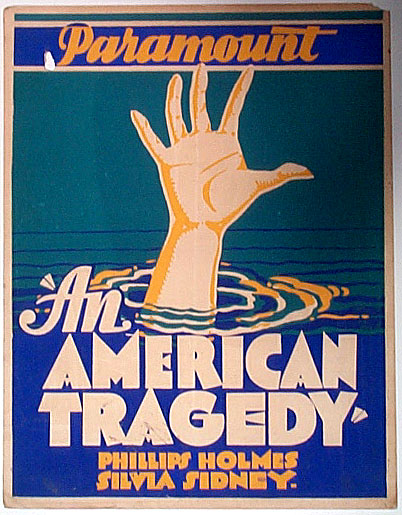 Josef von Sternberg’s version was developed from a screenplay not by Eisenstein – hardly – but Samuel Hoffenstein, a drama critic and acquaintance of Dreiser’s. Paramount’s Adolph Zukor pleaded with Sternberg to make it on the cheap, much to David Selznick’s horror: certainly the director’s basic inclination towards surrealism and artifice would have suggested he was precisely the wrong artist to take on such a subject. Merck outlines (future screenwriter) Lamar Trotti’s changes to the adaptation (such as bringing back the novel’s coda) as advisor at the Motion Picture Producers and Distributors of America’s East Coast office. Dreiser himself and producer Hy Kraft then wrote an additional dozen scenes – none of which was used; and yet more scenes were commissioned from a Broadway playwright. A lawsuit was brought by Dreiser, during the course of which it was claimed that Sternberg was more familiar with the novel than the author himself. The film was eventually released as An American Tragedy in 1931, complete with Sternberg’s ambiguity of style, his preference for tragic heroes and his trademark fatalism, and Merck illustrates how some of its basic tropes, visual and literary, would influence the later, more famous melodrama, A Place in the Sun, some twenty years later. 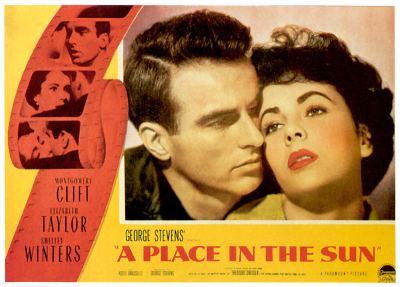 The first treatments for Stevens were written by Michael Wilson and the eventual film retains his key structure and characterisation, albeit he had made some radical changes to the novel, including the abandoning of much of the protagonist’s backstory and changing his name (he would eventually be named ‘George Eastman,’ after the director and the manufacturer of Kodak Film). Wilson would appear before HUAC the month the film was released. As the second writer on the project, Harry Brown retained the idea of the protagonist’s ‘inner voice’ with a character more akin to Steven’s interests and a switch in several scene locations. The change of title came from Ivan Moffat.

Merck makes the canny point that Stevens’ work is controversially ‘quoted’ by Godard’s Histoires du Cinéma as a means of connecting his wartime experiences (Stevens had shot film in Dachau) with the extraordinary close-ups of lookalike stars Montgomery Clift and Elizabeth Taylor. If there is no direct connection, critic David Thomson asserts “the gravitational pull toward death” in their love scenes (A Biographical Dictionary of Film. London: Andre Deutsch, 1994: 715.)

This is much more than a valuable addition to adaptation studies –it is at the very least that. Merck examines the relationship between origination, authorship, auteurism and the vicissitudes of production and reception –with not a little attention paid to censorship en route. In the spaces between books and films here, and perhaps between the very lines and frames of the films discussed, is a story of excess, guilt, repression, suppression, desire, ambition and murder –much more than a textual history, this is an intertextual exploration and interrogation of a great American cultural product that has ramifications across many disciplines, not just twentieth century film history itself. Its future application as a model within the field of film studies is immense.