A l’intérieur: a Rebirth of French Horror

Several years after the startling release of Haute tension (2005, Alexandre Aja) we can begin talking about a viable, exciting rebirth in French horror film, with the recent release of Inside/ A l’interieur (2007, France, Alexandre Bustillo, Julien Maury) signalling yet another boost in the arm to the genre. I’d even go as far as saying these new horror films have given a much needed boost to French cinema in general, but unfortunately for the local French industry, the rebirth seems to have generated another trend: young hot shot French directors being lured to Hollywood for the big paycheck/big budget film: Alexandra Aja, director of Haute tension (2005) has gone to Hollywood to direct the remake of The Hills Have Eyes (2006), Mirrors (2008), and is in pre-production on a 3-D remake of Joe Dante’s Piranha; Xavier Palud and David Moreau, co-directors of Ils/Them (2006) have since directed the remake of The Eye (2008); and Eric Valette, director of Maléfique (2002) directed the remake of One Missed Call (2008). Meanwhile rumor has it that the co-directors of Inside, Bustillo and Maury, are in pre-production on a sequel to Rob Zombie’s 2007 remake of Halloween (yes you heard right!). Needlessly to say, none of these films have been the equal of the director’s previous French film(s). Other films that can be considered as part of this renaissance include Robin Camillo’s excellent and seriously overlooked Le revenant (2004), Xavier Gens’ Frontière(s) [2007], Kim Chapiron’s Sheitan (2006), and –on the peripheral because it is Belgian, Calvaire (Fabrice Du Welz, 2004). Some important forbearers of this French horror film rebirth are no doubt the intense, primal human dramas by Gaspar Noe, Seul Contre tous (1998), which starred the imposing figurative killer from Haute tension Philippe Nahon, and Irréversible (2002), and Claire Denis’ revisionist vampire film, Trouble Every Day (2001), which featured the foreboding killer from Inside, gap-toothed modern femme fatale/goth queen Béatrice Dalle.

A l’interieur is reminiscent in feel to an equally audacious Italian horror film, Il Bosco Fuori (2006, Gabriele Albanesi), with the slow build up to an intense home invasion/home containment nightmare which becomes increasingly gory, with touches of surrealism lathered over the harsh realism. It also can be seen as a mini-trend of home invasion horror films, along with Haute tension and Ils, which is a type of crime that seems to be on the rise in North America; or at least there is a rash in the reporting of home invasions, which is one of the most frightened crimes imaginable for a society living in an otherwise safe, ‘civilized’ well-to-do nation. It is one thing to feel fear or be on your guard when out in urban city streets, especially late at night, but quite another to fear for your safety in your own home, where we feel the most vulnerable because we feel most safe. This apparent rise in home invasions is perhaps a reason why we are seeing more of these films now, and why we find them particularly frightening. And this horror trend no doubt taps into this growing urban fear. Of course there is something quite ‘off’ about the home invasion in A l’interieur. For starters it is not random –the invader knows her victim’s name and relevant recent history– though it appears as such before a motive is discovered– but an act of retribution (of sorts). The invader, in this case the French tempestuous siren Béatrice Dalle, dressed in all-black, appears like some portentous supernatural messenger of death. (Can one read the film as a hysterical fear of birth cautionary tale????)

The ‘twist’ comes out in the end, when the (obvious) CGI fetus we see floating in the womb in the opening car crash scene is revealed to belong to someone other that who we first imagined. The ‘home invasion’ notion of a safe haven being rudely attacked is figuratively suggested in the way the film begins: the image of a baby floating in the safe sanctity of a womb, rudely disrupted by an abrupt physical shock which throws the baby in its womb, blood appearing, and then the shot cuts to the cause of the shock, a car accident. A nightmarishly bluish/cool rain-soaked street scene is the set-up for a mobile camera that tracks (on a steadicam) at street level toward the car and then cranes up to the broken windshield to frame two injured, unconscious people, a young pregnant woman and her husband. At this point we assume the womb (and baby) belongs to this woman, Sarah (Alysson Paradis), the film’s young protagonist. 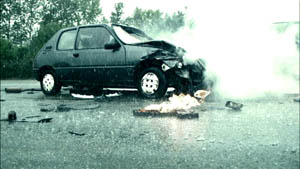 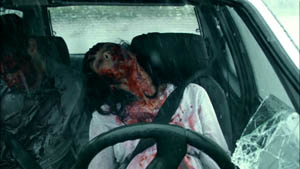 The narrative picks up four months after the accident which claimed the life of Sarah’s husband Matthieu (who we see briefly in the car and in Sarah’s waking dream), with Sarah on the eve of giving birth to her first child (it is also Christmas eve, but there is little outward evidence of this in the film). While waiting for bedtime, a loud bang on the door ruptures her sense of tranquility. The person outside wants to use Sarah’s phone, but when she lets slip Sarah’s name and knowledge of her husband’s death, the audience senses a night of danger ahead for our protagonist. Our first sight of the assailant is an ominous flash of her face outside the living room patio glass door as her face is momentarily illuminated by the flash of a match. A visit by the local police does little to alleviate our fears, and within minutes Dalle’s character, simply known as ‘the woman,’ finds a way into her home, first appearing eerily behind her in the cusp of blackness, and then hovering over Sarah’s sleeping body and exposed oversized belly with a pair of scissors. Sarah wakes up just before the scissor causes lethal damage and locks herself into the temporary safety (and enclosure) of the bathroom. 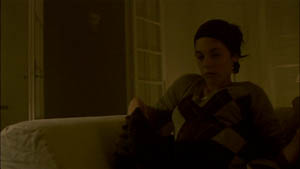 From this point on, roughly twenty minutes into the film’s slim 80 minute running time, the film becomes a surreal study in victimization, as one person after another nonchalantly steps into Dalle’s lair to be viciously murdered. First Sarah’s boss, who has come to drive her to the hospital, then her mother, followed by three police officers and a suspect in their custody The first time that Sarah gets the chance to lash out at her invader –she hears someone opening her bathroom door, where she has locked herself in– she instinctively lashes out at the person, too late to realize that she has impaled her own mother through the neck, and is left to watch her twitch to death. As if the Sarah character has not gone through enough torment! The final ten or so minutes comes down to a showdown between Sarah and her psychotic motherless assailant. A flashback (cued by Dalle’s voice-over) takes us back to the opening car crash from the perspective of the other car, and reveals that the baby seen in the womb was not Sarah’s but Dalle’s –and that it did not survive the crash. Through this flashback we learn the Dalle character’s motive for her murderous rampage: to collect the baby she feels is owed to her after losing her own in the opening scene car accident. The loss of the child has caused a psychic breakdown. In a curiously emotional denouement that can only be seen as a natural progression of the narrative, the Dalle character performs a ‘natural’ cesarean birth by snipping into Sarah’s bulging belly and ripping the baby out –the final reverberation of meaning of the film’s multilayered title. The final shot is a slow dolly out from the facially disfigured Dalle –her face burned by Sarah’s earlier self-defense use of an aerosol spray can– sitting in a rocking chair (the same we had seen a pregnant Sarah in earlier) caressing the still-living baby in her blood-soaked arms.

The film is only 80 or so minutes and takes about 24 minutes before any real hell breaks loose, but the opening scenes are subtle exercises in control. For example, before the violence arrives there are several of early, slow moving long takes which allow us time to sink into Sarah’s quiet depression. The insular mood of the film is aided by composer François Eudes impressive original score, which alternates between melodramatic violin music, ambient soundscapes, and harsh electronic shrieks that punctuate many of Dalle’s stabbings. The film also has a few nice little hommages: to Rear Window –the way Sarah, a photographer, uses her photo flash as a weapon/deterrent/aid– and Blow-up –Sarah develops the photos that she took of the lady spying outside her window, which includes photos she took earlier in the day of a young couple with their child in the park. She looks into the background of the photo and sees the threatening lady from her other photo hiding behind the bushes, recalling the way the David Hemmings character looks into his park photo and discovers what may be a corpse lying in the background bushes. 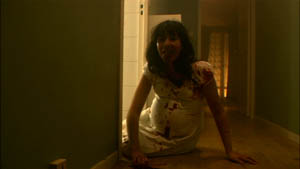 Sarah outside her temporary sanctuary

There is no question that the film is very violent, but without ever becoming wholly gratuitous or feeling exploitative –though I imagine not many women will have the stamina to watch a pregnant woman being subjected to an inordinate amount of physical violence. The film is really well directed, shot, and lit. The latter (by Laurent Barés ) is probably its strongest point, with rooms in Sarah’s house having a completely different ‘light tone.’ The bathroom is cool and harsh, lit high key; while the corridors, hallways and bedrooms are lit as if in a constant fog/mist, with a heavy texture in the air; giving the impression that the inner spaces were meant to suggest a womb, with the cool temperature of the bathroom scenes counter pointed by the orange/yellow color tone for most of the other interior spaces. 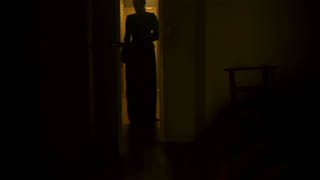 Dalle in the home’s ‘womb-like’ setting

As the directors admit in the making of featurette on the DVD, there is lots of blood, but they feel it is also emotional and has a hint of sentimentalism, with one of the directors going as far as to call the film a love story. Perhaps, but the emotion is one of very twisted maternalism: the ‘lady’ (Dalle’s character has no name) is not out to necessarily kill Sarah or to avenge her loss, but wants to ‘steal’ her child out of her great grief. She even saves Sarah from sure death, in a bizarre moment where a police officer who was murdered while trying to repair the fuse box, spontaneously snaps to life as a zombie and threatens to kill Sarah. In fact the two women are strongly linked through a common deep grief: the Dalle character from the loss of her baby, and Sarah from the loss of her husband, who died in the same car crash. The tragedy caused by the opening car crash acts as a symbolic umbilical cord tying the two women together until the very bloody end.