Montréal-based filmmaker Denis Villeneuve has, in the last years, become an important name in the Hollywood science fiction realm for his work on Arrival (2016) and Blade Runner 2049 (2017). Not only have these films grossed millions of dollars around the world, they have also been met with a rather consensual critical acclaim. Reviewing Arrival, Film Comment‘s Devika Girish applauded Villeneuve for rendering its protagonist’s quest to investigate the presence and language of a floating alien ship in rural Montana with sensuous audiovisual synergy. One year later, the same magazine published a review on Blade Runner 2049, in which the author Jonathan Romney urged his readers to watch the film on the big screen for its use of sensuous detail. As accounted by the reviewers above, such visual sensuality is characteristic of most of Villeneuve’s work, and along with his predilection for crafting intricate and exciting narrative twists; it attests to an undeniable talent. This, however, will not be the subject of this text. A few years before Arrival and Blade Runner 2049 came to being, he directed a much smaller film in terms of its scale of production, titled Polytechnique. A recreation of Canada’s most harrowing massacre to date, this film follows the lives of three people involved in the events: the killer, a witness and a survivor. Although radically distant from Villeneuve’s current science fiction momentum, this film is very much revelatory of the aesthetic pleasures he seems to take in the creation and treatment of images. Described as sensuous in Arrival and Blade Runner 2049, such aesthetic pleasures come off as unapologetically harrowing in Polytechnique. 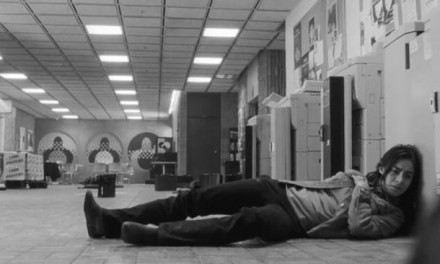 Almost thirty years after Marc Lépine assassinated fourteen young women and left many others injured, I find myself with a chill running down my spine as I write these words not far from where the femicide took place: Université de Montréal’s École Polytechnique. Discussing the university’s brutalist architectural style, a student who goes there described to me its internal labyrinthine structure as “nightmare material”. The corridors, that are indeed important scenarios of the film in question, are undeniably nightmarish, a characteristic Villeneuve seems to exploit more in the name of sensationalism than anything else. Indeed, the corridors are also the site of exciting visual challenges and explorations, as exemplified by the oftentimes awkward camera angles and ingenious movements he lavishes on throughout the massacre sequence. In doing so, we are offered not one, but three points of view that unexpectedly meet during the film, and that compose the kind of intricate narrative structure Villeneuve has become known for devising, and that is best achieved in Incendies (2010). Such unexpectedness attests to Villeneuve’s talent to produce surprise in his audiences, and although the surprise factor makes itself present in scenes such as the one in which we discover that one of the girls survived the shooting, it is his insistence to achieve realism through representation that strikes me the most, one which I wonder the ethical implications of.

Six years after Polytechnique was released in the Festival de Cannes, the festival welcomed another film that deals with the systematic violence humanity continues to face: Son of Saul (2015) by László Nemes. Set in 1944 in the Auschwitz-Birkenau concentration camps, the film follows a member of the Sonderkommando (the group of Jewish prisoners who were in charge of the cremation of bodies) named Saul as he embarks on the mission of finding a rabbi who can give a proper burial to a little boy he found agonizing in a gas chamber. Steadily following the protagonist in close-up, Nemes obliges us to be with him as the horror that unfolds is blurred due to the distinct shallow depth of field allowed by the lens. What this aesthetic decision does is, on the one hand, invite us to complete those blurred images with our imagination, and on the other, ask us to empathize and grief with Saul. It is an intense experience to which Senses of Cinema’s Chari Larsson concludes in her essay “Making Monsters in László Nemes’ Son of Saul“ “This is not a mere illustration, but an integration of ethics of spectatorship into the film’s form. Nemes’ demands on the spectator are high: do not avert your gaze; to look away is to surrender your ethical responsibility to look, and to imagine (Senses of Cinema)

When I left the cinema after watching Son of Saul a few years ago, I felt that I had had a constructive experience. This was an entirely instinctual response that back then had no rational explanation, and although such explanation is not always needed, here Larsson’s final thoughts on Son of Saul shed some light on how I had participated in a political exercise on empathy. In turn, that same reflection now reveals why my experience with Polytechnique was a destructive one. By indulging in the aesthetic pleasures of his camera angles and movements, devising characters such as JF (the witness) that call for sentimentalism rather than complicity, and covering it all up with an unnecessarily nostalgic black and white, Villeneuve makes it impossible for Polytechnique to integrate “an ethics of spectatorship” into its form. What this results in is a violent film. Not just a film about violence, but a violent film.

Carolina Benalcázar is currently pursuing an MA in Film Studies at Concordia University. She is from Quito, Ecuador, where she has worked in film production, writing and programming. She is part of the editorial collective Recodo.sx (www.recodo.sx), which also functions as a creative non-fiction digital magazine. She also writes about film for Mubi and Another Gaze.