Not to be confused with Martin Scorsese’s neo-noir, A Taxi Driver (Jang Hoon, 2017) is a Korean historical drama set during the 1980 Gwangju Massacre, based on the anecdotes of a German journalist who first broke the story out to the world. A very traumatic page in recent Korean history, the massacre occurred when Chun Doo-hwan, a general who recently seized power in December 1979 through a military coup, declared martial law in Gwangju city in Southern Jeolla Province and massacred thousands of protesters. Jang’s work is the most expensive film to date that depicts the event, given a budget that would be considered a Korean blockbuster. As a film depicting a historical trauma, it is fully aware of the position. After all, having premiered in Montreal’s own Fantasia, A Taxi Driver serves not only as a domestic blockbuster, but also has its eyes set on the international stage, especially when compared to the other films that depict the same event (May 18, A Petal, Peppermint Candy). Its main purpose is to educate those who may not be familiar with the event, foreigners and Koreans alike.

In that sense, it is probably the most accessible point of entry into getting interested in Gwangju Massacre from a foreign perspective, as the film is structured that way. The story follows a foreign reporter (Jurgen Hinzpeter, played by Thomas Kretschmann) infiltrating into a city under martial law along with his apolitical local taxi driver (Man-seob, played by Song Kang-ho). Over the course of the film, the duo witness unspeakable horrors, get involved in a few chases and eventually escape the city to let the world know what is happening in Gwangju. These two actors, both internationally recognizable, become the point of identification for the audience: in the case of Song, representing the Korean population who has forgotten the event that took place 37 years ago, while Kretschmann stands in for the uninformed non-Koreans who have never known of such a traumatic event. It is not uncommon for both younger generation of Koreans and foreigners to not know how relatively recent the country’s democratization was. (1988 or 1993, depending on what one considers democratization)

The film’s structure adopts a very typical Hollywood action formula: it’s about going into a hot zone and then eventually getting out. It had the budget of a Korean blockbuster ($13m), meaning that unlike films such as A Petal (Jang Seon-woo, 1996) and Peppermint Candy (Lee Chang-dong, 2000), two auteurist films of pre-multiplex era of Korean cinema in the nineties, it required a more commercial approach in the narrative. While the film celebrates the two heroes of Korean history, they are also mere viewpoints through which the audience sees the diegetic world. If Hinzpeter is a literal foreigner in Korea, Man-seob is a domestic foreigner; cut off from the political consciousness, Man-seob resembles modern-day Koreans that need a reminder of the past. It is likely that the film’s production, which took place during President Park Geun-hye’s regime that oppressed left-leaning artists including the taxi driver Song Kang-ho, was very aware of that current situation. To these two, Gwangju, under martial law and cut off from the rest of the nation, is a filmic world that they enter. Like the taxi that Man-seob drives, the two characters are the vehicle which audiences ride to experience the roller coaster of emotions that the film bombards the audience within a highly workmanlike fashion.

This workmanlike approach to produce some kind of emotional reaction from the audience is best exemplified by the meticulous production design. The chaotic streets with dead bodies and banners of struggle all mingled together, the city square full of people with era-appropriate clothing, and the horrifying hospital scenes that resemble many of the photographs that have now become iconic in representing the massacre; the film is relentless in its mission to convince the audience of its authenticity. Visiting Gwangju now, it is difficult to truly grasp how the traumatic events even took place, since much of the city has seen massive development and transformation after the democratization. Many of the outdoor scenes were shot in sets, simply because the buildings of the era do not exist anymore. The film is, at least visually, foreign even for the Koreans of the democratized era. 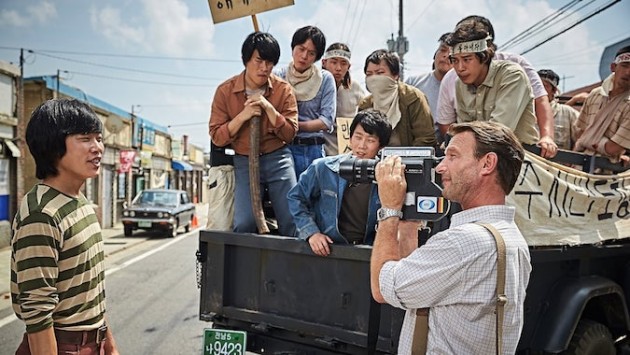 This foreignness, quite unfortunately, also becomes the film’s rationale for action sequences. Maybe anything could’ve happened there (at the time of the film’s release, Hinzpeter’s real-life taxi driver had not yet been identified). The heart-pounding chases the duo have with the Korean secret police, as well as the taxi drivers coming to rescue in a very formulaic fashion during the protests (it should be noted that taxis were indeed used to ferry injured protesters to hospital, perhaps in a less dramatic fashion), all happen within that aesthetic of foreignness. The numerous comic relief scenes, ones involving Hinzpeter’s culture shock especially, are very typical of a Korean commercial film, and they bring back the emotions that may feel too detached from all the action. This aesthetic choice helps the film to be more commercial, and it achieves a balance between a period drama and a blockbuster action piece, with emotions ringing constantly in a rigorous effort to squeeze tears out of its audience, even though whether that is ethically appropriate is still questionable.

Is it though? The film was a commercial success and was the second most watched film of 2017 in Korea. But more importantly, it was a critical and political success as well. It won Best Picture in both of Korea’s two most respected film awards (Blue Dragon Awards and Grand Bell Awards), while it also became a social event for older Koreans to remind themselves of the history. The younger generation, on the other hand, was exposed to it for the first time, riding on the enormous political emotions of impeaching a president and electing a new one – who was one of the indirect victims of the event – only a few months prior to the film’s release. This film is doubtlessly problematic in its handling of trauma; yet, its ability to positively influence generations of people is astounding. Its simplified narrative hides the lingering trauma, yet it is also the appeal for so many. One of the characters shouts at the end of the film to the escaping protagonist, “Don’t worry about us here, just tell the world what’s happening.” Perhaps that’s the answer the film has for its problems: it had a job to do, and it did it. The rest —the ethical and political justification for its aesthetic choice— is up to the audience to figure out.