A Book By Stacey Abbott

If vampires ever flew into the real world from the silver screen, Stacey Abbott’s passionately written and concisely focused book Celluloid Vampires: Life After Death in the Modern World (2007, University of Texas Press) could not only provide the necessary groundwork to chart their colourful history, but perhaps even help formulate a manifesto capable of advocating their rights as former humans. Abbott displays a keen historical sensitivity, scholarly bent, and expansive awareness of wider cultural issues in her book that would help this cause. She argues that vampires are unique cinematic creatures that have come to embody the experience of modernity by adapting and migrating according to civilization’s technological and social evolution. Evoking unmistakably horrific and timeless iconography, not only is the vampire still a viscerally potent – if not rampantly popular – symbol and metaphor, but has by now burgeoned into an entire narrative form and subculture that reflexively annunciates aspects of the modern human condition alongside civilization’s “constant state of disintegration and renewal” (5). 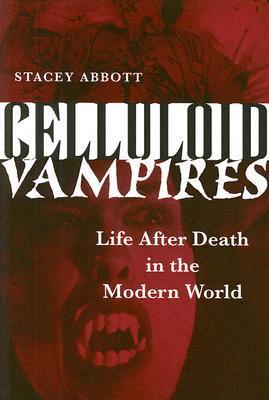 Structurally, Celluloid Vampires is neatly divided into four parts comprising twelve chapters. Part One expounds the creature’s origin story in canonical literature and its first groundbreaking appearances in film, using George Melies’ La maison du diable as a springboard into more focalized discussions of Bram Stoker’s Dracula, F.W. Murnau’s Nosferatu and Hammer Horror classics. Part Two traces the redevelopment of this early cinematic vampire through its modern American inception in the 1970s, with special attention paid to genre revisionism and the vampire’s invasion of the urban sprawl. Part Three highlights the creature’s more marginal incarnations after their socio-political bite in the heyday of 70s activism, and treats hybridity, gender issues, and formal experimentation. Finally, Part Four further expands the boundaries of what a vampire can be or signify in this post-modern age, bringing into clearer light the symbiosis between vampire and technology (“vampire cyborgs,” as Abbott puts it), and musing on what future shape vampire media might take in a seemingly borderless world.

What is exceptional about Abbott’s writing style is her ability to combine equal measures of personal insight, anecdotal evidence, and historical knowledge. She effortlessly melds Marxist philosophy with Robin Wood’s film theories, reconciles the Bakhtinian carnivalesque with the Baudelairian flâneur, and is not afraid to praise ‘vampire scholars’ like Nina Auerbach while boldly challenging some of their assumptions that depict vampires as being too stagnant. Abbott’s background interest in the archival side of cinema is also apparent, and used to great effect in making the chronological structure of the book not only densely informative, but also an entertaining read that never sacrifices an underlying sense of fun in the name of academic rigour. Another positive side effect of this chronological format is that the reader is given a series of impromptu crash courses on historical periods and artistic movements, from classic Gothic idioms to the golden age of Hollywood cinema and how socio-political upheaval in the 70s generated films with just as much timely urgency. Dissecting lesser known, art-house vampire fare just as willingly as primetime television like Buffy the Vampire Slayer, Abbott’s interdisciplinary approach and foundational melting pot of film and television turns a niche interest into something accessible for the masses.

Especially impressive is the way Abbott draws acute parallels between mythical accounts and real-world abominations, such as how Dracula’s stealthy hunting on London’s streets echoes Jack the Ripper’s figurative ‘feeding on blood’ in 1888. “Part Two: The Birth of the American Vampire” offers the most fully fleshed out series of directed readings and analyses in the book, and invokes these resonances between reality and fiction most often, with multiple causal links inferred between horror films and Vietnam or nuclear panic, for example. Particularly compelling is a section in Chapter 7 that pairs the “exploding vampires” of the 1980s and practical special effects with the devastating real-world impact of AIDS and idea that “the vampire body became the site upon which our concerns and anxieties” (124) were exhibited. By holding up a mirror to the real world and underlining its vampiric parallels like this, the overall reading experience is given an added sense of relevance and gravitas. Mythology and history are shown to be congruent and interconnected in a logical, linear way that does not require contrived stretches of imagination or theoretical cherry picking. It is also commendable that Abbott does not enforce a single concrete definition for recurrent key terms like “vampire” or “modernity,” but instead champions the mutability of these words, bringing a plurality of ideas and values into discussion.

If there is one criticism that can be leveled at Celluloid Vampires, it is the absence of a more international cinematic scope. Since focus is relegated almost exclusively to American and European (especially British) offerings, foreign vampire films from Asia, India, South America, Russia, etc. are not included. Certain concepts that the author tackles such as ‘Otherness’ might have benefitted from expanded cultural consideration, and some sections – namely “Part Four: Redefining Boundaries” – could have also been strengthened by a wider geographical scope, especially when notions like globalization and nation-states come into play. Of course, the counterargument to this criticism is that the chosen geographical parameters are where vampire films have mustered the most visibility and power, and thus deserve the most scholarly attention. Although Abbott articulates what the aims of her book are from the outset, and emphasizes that it is not meant to be an exhaustive encyclopedia of every vampire film ever made, including a few brief examples of non-Westernized vampire films as a counterpoint might have allowed the book’s contents to come across as even more prolific, complete, and culturally valorized.

Regardless of the fact that East and West are delimited by Europe and America, the wealth of insights presented here are still utterly fascinating. As much as vampires can be pigeonholed as fang-bearers that exude auras of mystery, seduction, and violence, Abbott makes it remarkably clear that the vampire’s identity exists under a wider umbrella that encompasses subtler traits, ontologies, and sociological positions. While contemporary popular culture has put stereotypical ‘cookie-cutter’ spins on these creatures for the sake of ticket sales, for Abbott, vampires are more like the chameleons of the horror film universe, and are just as mercurial as the term ‘modernity’ itself. From explosive guts to spectral shadow works, Abbott not only takes the reader on a robust tour through the world of these supernatural beings, but reveals what kind of historical or technological contexts produced them, and identifies the indelible bloody marks that they have left on the horror genre, cinematic medium, and public imagination.

Adam Bagatavicius has a BFA in Film Studies from Concordia University, and will be pursuing an MA in Film Studies at UBC beginning Fall 2012. His overarching interests lie in the horror genre, sound design, cinematic excess, and non-narrative/non-verbal filmmaking.