The “Citizen Kane” of experimental cinema

Thirty-five years after its inception, Wavelength (Ontario, 1967, 45 min.) remains one of the most vital and (still) groundbreaking films in the history of experimental cinema. It is, quite simply, the “Citizen Kane” of experimental cinema. Screenings of Wavelength in and out of academic situations have probably generated more mixed emotions – frustration, boredom, exhilaration and awe (sometimes in the same spectator) – than any other film. I can vouch from personal experience of teaching this film, that Wavelength retains its power to evoke these emotions. In fact the only time in over ten years of teaching that I “lost my cool” in a classroom setting was after a lecture/screening of Wavelength, when, during the discussion period, a group of students responded angrily to being subjected to the film. After such comments as “why do I have to watch this film,” “what a waste of film stock,” “why was this film even made,” or “the film was poorly made,” I raised my voice in a mini-diatribe against the commercial trash that they gladly sit through on a regular basis (at over twice the length) and the general lack of spectatorial willingness to engage in anything that questions traditional viewing habits (i.e. no plot, no characters) and raises abstract formal or thematic issues.

But Wavelength has also been a challenge for the seemingly more informed, film critics and theorists who have all too often incorrectly described the film as a “continuous” zoom taken from a single fixed camera position. The film begins at the widest setting of the zoom lens and concludes at its shortest, but this trajectory is neither continuous (but intermittent), nor taken from a fixed position (but slightly altered camera positions). On the soundtrack we hear (among many other things) an aural equivalent to the zoom lens shot(s), a sine wave which goes from its lowest note (50 cycles per second) to its highest note (12000 cycles per second). As Snow notes in his Offscreen interview, he is perhaps most shocked when these so-called experts fail to even mention the sound, let alone comment on how important the sound is to the film’s overall experience and the illusion of continuity (even to the point where the image of the wave acts partly as a visual pun to the aural ‘sine’ wave).

The events which occur in-between (too complex to adequately describe here), both formal and “narrative,” give Wavelength its varied philosophical and cinematic meanings. There are four linked human events in the film, briefly: 1) a woman enters, followed by two men carrying a bookcase 2) two women enter the loft, one turns the radio on then off, the other shuts the window 3) a man staggers into the frame and falls onto the floor 4) a woman enters and makes a phone call to report the fallen man. The events trigger a pretense of narrative, but our concentration soon changes from an interest in the meaning of the events to an interest in the teleological purpose of the zoom: where is it heading? In Wavelength cinematic interpretations (as an examination of filmic narrative; as an ontology of filmic time/space; as a representation of transcendence) co-exist alongside non-filmic philosophical interpretations. The philosophical meaning most often ascribed is to read Wavelength as a metaphor for consciousness. In support of this I quote John Belton, who notes, “every zoom makes an epistemological statement, contemplating man’s relationship not with the world itself but with his idea or consciousness of it.” (p. 21) Hence whereas in a moving camera shot there is a physical movement of the camera through space, in the zoom shot there is no physical movement of the camera, except of course the slight back/forth movement of the lens itself, but movement in a more abstract sense: into a character’s mind, as an expression of an emotion, through an imaginary cinematic space, etc.)

In addition, the many textural changes that occur in the course of the film, subtle and radical color changes, exposure changes, black & white shots, clear images, negative images, light flares, day to night changes, visible splices, and different stocks, recall David Hume’s belief that the mind is but a “bundle of perceptions.” Snow’s own description that the film was a “summation of…religious inklings….” supports a reading of the zoom’s trajectory, from a view of the loft to a full frame view of the ocean wave in the wall photo, as a transcendental journey where the spectator is “carried” from one space/time to another. It is not surprising that Michelangelo Antonioni, one of the greatest ciné-philosophers, may have been influenced by this trajectory for the design of his famous penultimate shot in The Passenger (1975). There the camera also begins on a defined space, the interior of a hotel room, and dollies past a seemingly dead man lying on the bed to the window seen in the background, then out through the window to investigate the surrounding courtyard with a 360 degree dolly that ends looking back into the room from the outside (this is not a zoom shot, although there is a combination of zoom/dolly at points in the shot). Strangely enough, Wavelength’s portentous movement into the photo of the wave has influenced, consciously or not, several narrative films (in addition to The Passenger, Barton Fink 1991, Things Never Said in Playa Perdida 2001, The Shining 1980 (in their endings) and The Decline of the American Empire 1986 (in the beginning). 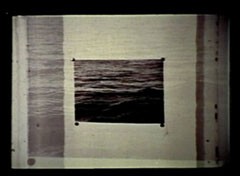 In her seminal piece “Against Interpretation,” written at the peak of Conceptual art movement and modernist art theorizing, Susan Sontag warned against art criticism that predetermines an artwork’s meaning through pre-packaged apriori interpretative grids (Freudian, Marxist, Psychoanalytical, Jungian, etc.). Sontag was not proposing that we eliminate interpretation altogether, but that interpretation should not take the place of the art, or more precisely, the experience of the art. More attention should be paid to describing the “surface” of art, in the case of cinema, camera movement, lighting, angles, composition, sound, editing, etc. To quote Sontag, “We must learn to see more, to hear more, to feel more.” (p. 23) As we discovered earlier, such a descriptive approach that relies on the senses can still lead to inaccuracy, especially with a film as ‘busy’ as Wavelength. However, Sontag’s point was echoed in the Offscreen interview concerning Snow’s films in general: that in certain important ways Wavelength can only be fully understood through a phenomenological, sensuous, “Sontagian” viewing. That the bodily experience of the film is as important as its purely cognitive experience.

An early, abridged version of this text appeared in Guide to the Cinema(s) of Canada, Peter Harry Rist, ed. (Westport Connecticut: Greenwood Press, 2001): 235-236.