…revolutionary cinema is not fundamentally one which illustrates, documents, or passively establishes a situation: rather, it attempts to intervene in the situation as an element providing thrust or rectification. To put it in another way, it provides discovery through transformation.

Fernando Solanas and Octavio Getino, “Towards a Third Cinema” (1969) 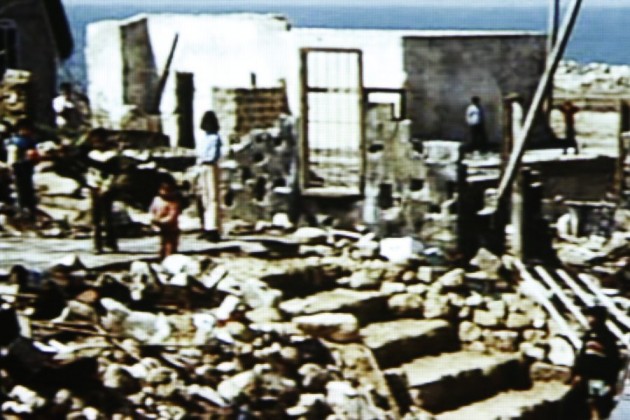 On Media-Making Towards Cinematic Justice

In his latest film Recollection (2015), filmmaker Kamal Aljafari recreates the town of Jaffa and recovers its original Palestinian community before the city’s destruction by colonization and settlement projects. Aljafari does so by deploying two specific media-making practices. The first is the transformative reuse of existing media materials––Aljafari’s film is indeed entirely constructed from excerpts taken from over fifty Israeli and American features shot in Jaffa between the 1960s and 1990s. The second practice is the use of digital after-effects, which allow Aljafari to erase the actors of the original features, and focus his own film on the city itself as the main protagonist of Recollection. Digital technology also enables Aljafari to zero in on Jaffa’s Palestinian residents, who were inadvertently caught on film by the Israeli and American directors. While formally excluded from their features – and thus, as Jaafari observes, “uprooted twice, in reality and in fiction” (Montreal Serai, 2010) – Jaffa’s Palestinian residents were able to infiltrate some of the scenes, akin to ghostly figures roaming in the background on each frame. They were waiting to be discovered. Through Recollection, they take the foreground, re-claiming their existence/presence in the city, albeit cinematically. Aljafari’s production process is comparable to an archaeological endeavor, digging into film archives to excavate material traces of Jaffa, its surfaces, its spaces and its inhabitants, and to recuperate the representation of lost history, lives and memories. For Aljafari, Recollection aspires to “cinematic justice” by laying claim to “a cinematic territory,” reconstituting not the lost city but its lost image [http://kamalaljafari.net/recollection/]. While the film treats a specific geography of political struggle, it expands the imaginative and creative possibilities of media-making as a practice for furthering transnational political and social justice. As Aljafari asserted during the Q&A session that followed his film’s screening at Montreal’s Museum of Fine Arts (2016), Recollection is not simply about Jaffa but about all catastrophized and disappeared/disappearing cities, from Berlin in 1945 and Beirut during Lebanon’s civil war (1975 and 1990) to Aleppo today. As such, his filmmaking not only lays claim on a lost space and people, but also stands as a model for transnational solidarity and resistance against violent dispossession and displacement.

Jaffa takes center stage in Recollection. Aljafari’s film focuses on the city’s urban landscape, on its buildings, surfaces and architectural details, recreating and presenting the urban fabric of Jaffa the way it was before the city’s destruction. In so doing, Aljafari sheds light on the politics of architecture, and the role played by (the obliteration of) the built environment in reproducing and re-enforcing relations of power and oppression. He also reveals how cinema and digital technology today allow what is impossible, namely, to imagine a different narrative for Jaffa and recover the city as it was before colonization. By appropriating and digitally manipulating existing footage of the city, Aljafari is able to recover its now long-destroyed urban spaces and places, thus undoing the devastating effects of Israel’s architectural warfare on Jaffa and its people, and sub/inverting the colonizer-oppressed relation. Moving away from a narrative centered on subjects, and focusing instead on the materiality of the city, Recollection deploys a new register for representing histories of catastrophe, and addresses politics in an oblique way. The film is unconventional in its politics of representation, and its vision of justice which is tied not to representations of people, but ways of (re)seeing spaces and places differently. Through the appropriation and repurposing of existing media, as well as the use of digital editing tools, Recollection strives to achieve justice on a spatial territory, in the cinematic realm, using new visual grammars for politics and social justice. 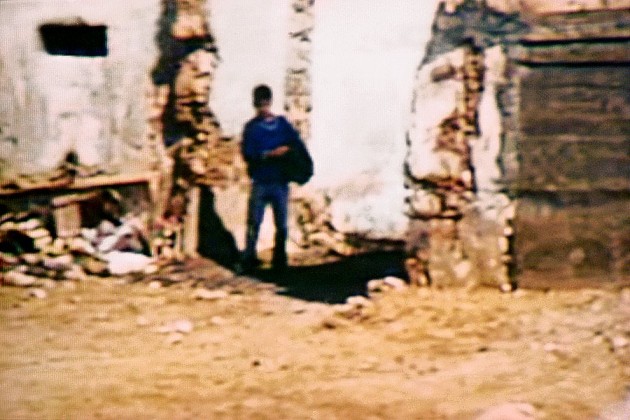 In her discussion of fan digital video-making (vidding), media scholar Alexis Lothian describes the subculture’s practices of sampling, mashing, ripping, remixing and burning as transformative: fans, or “culture thieves” (a term used by Lothian), appropriate existing copyrighted media material and create new artworks that lie not in the realm of intellectual property theft, but in that of artistic creation and transformation (p.131-132). Culture thieves challenge and complicate intellectual property/copyright logic and ownership relations, as they unsettle the traditional and restrictive dominant practices of media production, as well as that of distribution and circulation (since their cultural products are usually disseminated via the internet) (Lothian, p.131). Created through the sampling, remix and transformative re-use of film footage drawn from various archives, Recollection can be thought of as the product of a culture thieve, Aljafari, whose media-making process is centered on appropriating existing filmic materials, and subverting their narrative and semiotic content to create his own original artwork. While Aljafari is not (outspokenly at least) set against media corporations and their enclosure of the digital commons, his production process takes the form of piracy, and creative destruction/transformation that challenge dominant capitalist and profit-driven models of film production and distribution. Recollection sits at the intersection of politics, technology, and the ethics of media-making to explore the subversive potential of a radical and alternative form of cultural production.

How to understand Aljafari’s Recollection through Godard’s crucial distinction between making political films and making films politically? In his 1970 manifesto “Que faire?” (What is to be done?), Jean-Luc Godard declares that these two are antagonist actions that subscribe to two opposing conceptions of the world. Making political films belongs to an idealistic and metaphysical conception; making films politically belongs to the Marxist and dialectical one. Making political films means to understand the world and describe situations, and thus, “to only open the eyes and ears,” whereas making films politically is to strive to intervene in and actively transform that world, and “use images and sounds as teeth and lips to bite with.” Recollection is certainly a film made politically, not a political film. Rather that attempting to describe and represent Israeli oppression, the film stands as a political action in and of itself, opposing colonial violence, destruction and land settlement through a strategic gesture of cinematic re-appropriation (metaphorical, through the cinematic reconstruction of Jaffa, and literal, through the use of existing footage of Israeli and American films). Recollection is an intervention that uses cinema as a tool to imagine a different past (and thus, a different history of the future) for a colonized land and people. By creating an alternative narrative, Recollection seeks to overcome the present condition of oppression, and in so doing, opens up an emancipatory space for imagining a different and better future.

On A Cinema of Revolution and Emancipation

In their 1969 manifesto, Solanas and Getino propose the concept of “Third Cinema,” which they define as a cinema of revolution and liberation embedded in the anti-imperialist and anti-colonialist struggles of the people of the Third World. Third Cinema encompasses films that the dominant capitalist, imperialist, colonialist System cannot assimilate, and/or films that are set out against this System and the images it produces and disseminates. Third cinema is not defined by a fixed set of aesthetic norms, but rather, by its power to oppose and subvert the System as it prepares the cultural terrain for revolution and liberation. Recollection pursues similar aspirations, as it undoes colonialist representations of Palestine, reconstructing and reclaiming erased histories, surfaces, memories, identities and lives. As discussed earlier, Recollection also challenges the dominant capitalist system of media production and distribution by appropriating and using copyrighted footage without citation or attribution. Recollection then, can be understood as a site of cultural decolonization and subversion. It also holds the potential power of Third Cinema as a potent militant audio-visual medium and a platform of politicization. For Solanas and Getino, third cinema is a powerful tool for disseminating knowledge and activating the political consciousness of the audiences. Participating in a film’s screening becomes a “way of learning” for the spectators: “the capacity for synthesis and the penetration of the film image, the possibilities offered by the living document, and naked reality, and the power of enlightenment of audiovisual means make the film far more effective than any other tool of communication.” Could Recollection, as a filmic medium, act as a powerful form of communication that is able to draw, mobilize and politicize audiences? Could it become “a detonator or pretext” in a process of knowledge development, that starts with a sensory experience and transforms into a political practice? 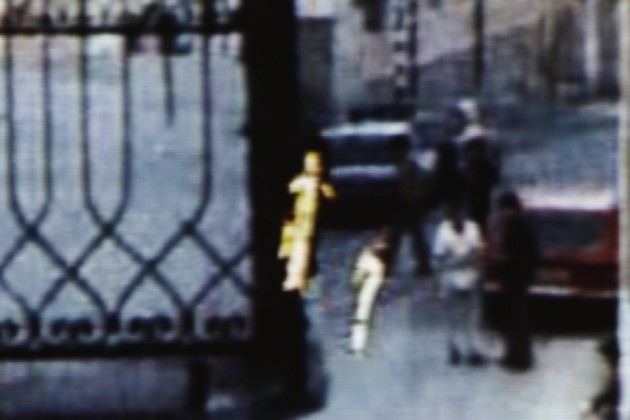 Aljafari, Kamal and Nasrin Himada. “This Place They Dried from the Sea: An Interview with Kamal Aljafari,” Montreal Serai, 2010. Accessed January 15, 2016.

Godard, Jean-Luc. “Que faire?” (What is to be done?). Written in January 1970 at the request of Simon Field and Peter Sainsbury for the magazine Afterimage, produced by Peter Whitehead. Published in Afterimage no. 1, April 1970. Translated to French by Mao Teitelbaum, 1970. Accessed February 10, 2016. 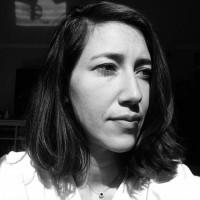 Farah has completed an M.A. in Media Studies at Concordia University and is currently pursuing a PhD. in Communication Studies at McGill University. Prior to that she held senior positions at the Sharjah Art Foundation and Art Dubai, two leading cultural institutions based in the United Arab Emirates. Her proposed research will examine the recent UAE’s state-sponsored museum boom — which includes the upcoming Louvre Abu Dhabi, Guggenheim Abu Dhabi, and the Zayed National Museum — as a point of entry for critically investigating the cultural politics of the UAE as a young modernizing Arab nation and emerging economy, and studying how the increasingly globalized and transnational institution of the museum mediates complex questions of nationhood and identity.