The Circulation of Palestinian Images

The films of Kamal Aljafari speak to each other and replay the history of a Palestine in the process of being annihilated and dispossessed. Visit Iraq (2003) collects the rumors and fascinations circulating around the abandoned office of an Iraqi Airways travel agency in Geneva, whose rent is paid every month even though it is unoccupied for more than ten years. This ghostly space lays the foundation of landscapes, this time Palestinian, described in the following movies. The Roof (2006) summons the possibility of thinking of the ruins as being at the same time the interruption, the confiscation, and the possibility of the future, while the film builds its narrative around the edifice where the director’s family lives. Balconies (2007) arranges diptychs of balconies, which – as with the second floor of the house in The Roof – remain unfinished. Port of Memory (2009) focuses again on the director’s home as the family is about to undergo eviction under Israeli colonial laws. The images shot by an Israeli film crew which figures in Port of Memory reappear metaphorically in Recollection (2015), as the film reworks the material of popular 1960s Israeli films in order to respond to the erasure of Palestinians by reintegrating them into their urban landscape.

In many ways, each of these films seems to present images that are frozen or suspended in a time that is lost or is in the process of being rediscovered. Furthermore, these films are driven by a tension between stillness and openness towards an indeterminate future. 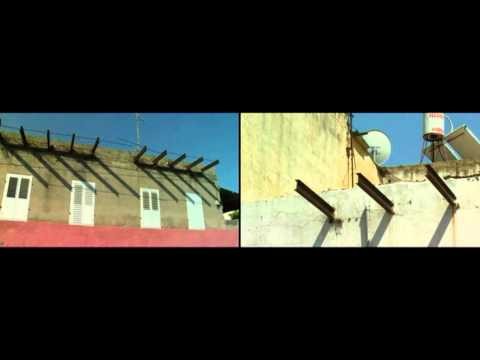 Who knows if the balconies we see are partially destroyed or partially built? Are the shuttered houses abandoned or protecting against the heat of the afternoon? There a door ajar, here a man pulls his suitcase. These solitary images reconstitute political histories of exile and forced departures. In fact, the homes in Balconies are not empty and people are not absent. They are either evicted or outside, and these houses are imbued with their history and their forced displacement. To rethink the non-presence of Palestinians beyond absence, which is then construed as definitive, is to defy the colonial “absentee property laws” that have justified the Israeli appropriation of Palestinian lands and homes at the time of the creation of the State of Israel in 1948. These laws are repurposed today in the logics of gentrification, as illustrated in Port of Memory. The temporality of these films is thus not fixed; instead, these houses and its Palestinian inhabitants are settled in the thickness of time. The long takes in Port of Memory and The Roof evoke the resistance of Palestinians who remain in their homes despite attempts to dislodge them. The stagnation of images and architecture is an expression of sumud, that is to say, Palestinian steadfastness, perseverance and continuity in the face of ethnic cleansing. 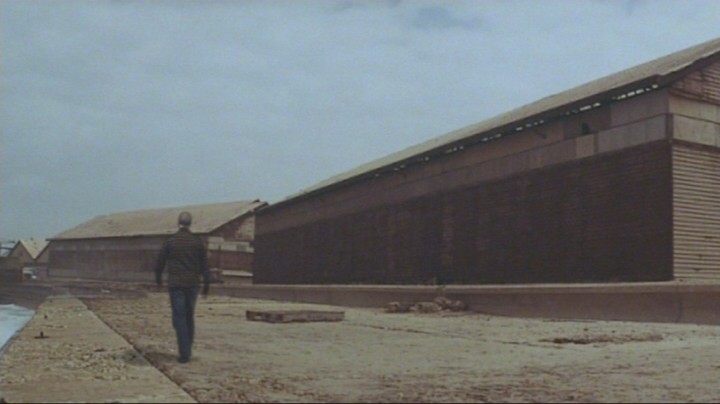 And so, it is an ethical obligation to situate these supposedly still images within a historical movement that has brought them into the materiality of film, and in a more general manner, into an economy of Palestinian cinema that must constantly negotiate the politics of its artistic discourses. As the title of Port of Memory suggests, these films are nodes in a network of circulating memory, but they also represent these concrete infrastructures such as the port of Jaffa, where Palestinians driven out by the violence of colonization have embarked on their exile. Finally, these films travel to other ports, such as film festivals, which are privileged platforms for the circulation and the negotiation of Palestinian poetic and politics. 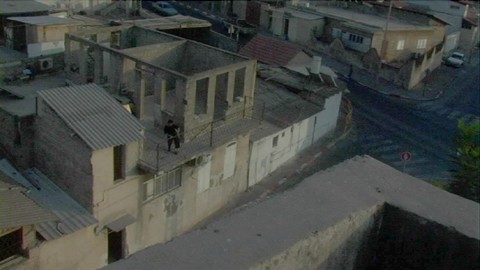 In the same manner, the conflicting temporality of Visit Iraq – where the travel agency, site of planning, is maintained in an abandoned state – suggests experiences of voyage and exile. Why does a Palestinian director who holds an Israeli passport and is studying in Germany, document an Iraqi travel agency located in Geneva? Can we imagine a pan-Arabic solidarity conditioned by the anti-colonial discourse of the 1950s and exacerbated by the US invasion contemporary to the filming, which also parallels the continued occupation of Palestine largely funded indirectly by the US? Similarly, could the fact that the abandoned travel agency, a symbol of the interruption of trade with Iraq at war, is located in the headquarters of the UN, Geneva, testify to the inability of the Organization to ensure the peace that is at the heart of its mandate? And this at the very moment when the Palestinian uprisings of the second Intifada struggle against the continuing Israeli occupation, made possible by the 1947 partition sanctioned by the UN itself. Such a contextualization goes unexplained in the film and might exceed the intentions of its author. Nonetheless, it provides some elements to understand the geopolitical depth of the contradictory temporality of the agency. This context also reveals the importance of reflecting on the possibilities and impossibilities of travel. In contrast to Palestinians in the West Bank and Gaza, the director can cross the Israeli borders without special request because he holds an Israeli passport; however, the scene in The Roof where he reconnects with an old friend based in Beirut through the phone, reminds us that he is legally prohibited from visiting most Arab countries because of his imposed nationality. Thus, Iraq is one such country that the director can only imagine through the windows of an abandoned office. 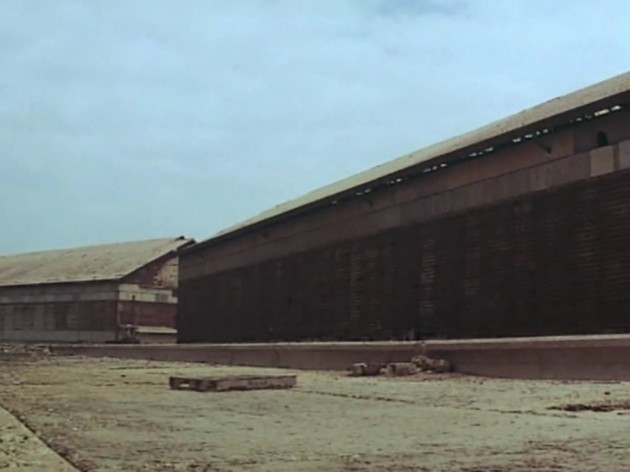 It has often been remarked that displacement is at the heart of Kamal Aljafari’s work, much like the violence of forced displacement is at the heart of Palestinian history since the beginning of the Zionist settler-colonial movement at the start of the twentieth century. Displacement has governed the production of a political and militant Palestinian cinema in the late 1960s, a refugee cinema in exile, fighting for the liberation of Palestine and pronouncing a future return, which thrived until the refugees’ canvas tents turned into concrete camps and the temporary became permanent. Similarly, if several forms of displacement are present in the work of Aljafari, one should also take into equal account the importance of the diverse modes of circulation of Palestinian imagery, including the movement of return, also invoked in these films. Recollection repopulates the streets filmed by Israelis with Palestinian presence by reworking and recirculating Israeli film material without their authors’ consent. The return of Palestinians to historic Palestine (which precedes the first stage of colonization that gave this land the contemporary name of Israel) is here performed by a negation of Israel’s ownership of these films, which are the product of the dispossession of Palestinians’ land. If we want to keep open the possibility of a Palestinian future, displacement and return must thus be seen as two sides of the same coin.

Poetic considerations therefore have a very material reality. The images with which Aljafari plays in Recollection belong to the economy of the occupation. These images have participated in the construction of an Israeli heritage oblivious of Palestinians and an Israeli film industry financed by a colonial power. At the same time, the movement of dispossessing Palestinians through images fits into the contemporary balance of power between the European funds that invest in Palestinian films and Palestinian artists themselves at the moment of producing their own history. Peter Limbrick reports on the relationship between Aljafari and the German funding in his discussion of The Roof. He noted that one of the co-producers, from the national German television station ZDF, set conditions with which the director was in disagreement. Following this process of artistic dispossession in which the sponsor was in a position to impose a certain narrative of political history, Aljafari undertook to repossess his images and finish the film according to his own understanding, an action that the ZDF ruled illegal 1 As highlighted again by Limbrick, this confrontation, at first anecdotal, speaks volumes on the possibilities and permissions that Palestinians have to make visible the violent history of colonization. 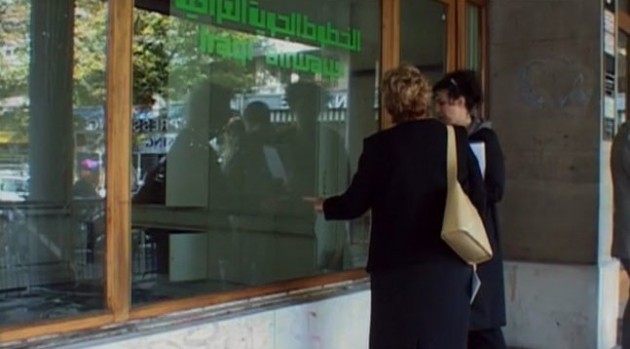 What kind of Palestinian image is thus allowed to circulate? As suggested above, festivals, but also contemporary art centers and galleries are among the places where Palestinian images in general and those of Aljafari in our case, circulate more easily (which is not to say without any constraint, as we have just seen). The articulation of the political through the poetic helps facilitate this movement, because the nuanced and subtle work on the image can be understood by funding bodies as a process of universalizing political issues. The use of poetry can be seen as an aesthetic rather than geopolitical commitment susceptible to attract a large and educated audience. On the other hand, to understand the poetry of these images is also to disentangle them, and to retrace the highly political path that they draw. It is again the ethical obligation to assign ourselves to a politicized archeology of these images which demands that we participate in circulating them as much as possible. And this not only to popularize certain representations, but also for building an economy of Palestinian images. We must first understand this economy in a symbolic sense, which is to encourage the flow of these images so they take on a greater role in the international narratives of Palestine. From a material point of view, it means creating conditions that will allow the possibility to produce more Palestinian images and more images of Palestine. This reflection comes in a contemporary context hostile to Palestinian images, and resistant to criticism of the Palestinian dispossession. Thus the violent opposition to the boycott of Israeli institutions initiated by the Palestinian BDS (Boycott, Divestment, Sanctions) highlights a misunderstanding of (or disinterest in) the economic ramifications of the occupation and its impact on even the possibility for Palestinians to produce their own history. [BDS] https://bdsmovement.net/ To conclude this reflection on a poetic and political note, the boycott advocated by BDS performs an operation similar to the one at work in Recollection: a refusal to support an economy of the occupation, which results in the circulation of a Palestinian narrative.

Featured image from The Roof

Translated from French by Donato Totaro and Viviane Saglier

Viviane Saglier is a member of the collective Palestinian Perspectives.