The main event at TIFF (the Toronto International Film Festival) 2010 was clearly the September 12th opening of the “Bell Lightbox/Festival Tower,” a complex of buildings dedicated to cinema. Just imagine a high tech art house, WITH the activities of a Film Library. This five-storey complex has five screening rooms, with the largest one (470 seats) equipped for 70 mm (the new restored version of 2001: Space Odyssey is scheduled to show there). Toronto is a city with a great number of commercial cinemas, mainly in multi or even mega complexes. The Bell Lightbox will offer something different. It is not surprising, then, to see that the old Ontario Film Library (at the Jackman Hall Art Gallery of Ontario) will now find accommodation in the 231 seat Screen Room 3, where over the course of next year they will screen the one hundred best films of all times (click here for a list). Parts of some walls are showing an experimental work by Guy Maddin. Starting on November 26 the Bell Lightbox will feature the Tim Burton Exposition, and a complete retrospective of his works. There are also conference halls, a bookshop, and two restaurants, all of which make the Bell Lightbox a one-stop rendez-vous for the cinephile. The Bell Lightbox was built at a cost of 196 million, with the Ivan Reitman family donating more than 22 million dollars to help start this project. The builders also added a forty-six floor condo complex at the back of the building to help the general economic sustainability of the cinema complex.

Important as the opening of the Bell Lightbox/Festival Tower was, there were also some good movies at this year’s TIFF. To find them you had to first make your way through a plethora of American (Hollywood) movies. Most of them were commercial products programmed with the aim of courting big stars to town (Robert De Niro, Matt Damon, Nicole Kidman, so on), and not at all valuable for someone looking for innovative filmmaking. But, among these American movies, two stood out for this viewer: Beginners and Rabbit Hole, both in the section “Special Presentation – World Premieres.”

Beginners (dir. Mike Mills) is the story of a father and son relationship. The father, Hal, is played by Christopher Plummer (in his august years) and the son Oliver is played by Ewan McGregor. After the death of his wife of forty years, the 75 year-old Hal decides to come out of the closet as a gay man. The son has to come to terms with this startling revelation while trying to make good with a girl he loves very much. The movie is built around two intertwining stories: the father dying of cancer and surrounded by many new friends that love him very much; and the son dying of not finding a true love. The movie is dramatic and realistic (in its depiction of living in LA) but is also very humorous (in particular with the dialogue exchanges between the son and his dog, transmitted through subtitles). It is, to my knowledge, an independent film, made with warmness and clarity.

While Rabbit Hole doesn’t disguise its former life as a stage play, the script is solid and the subject, parents who have lost their only boy (four years old), is strong. Nicole Kidman (Becca Corbett), the mother, searches out the adolescent boy that killed her son in a car accident, Jason (Miles Teller). She is in fact struggling to restore her mental health and ailing marriage to her husband Howie Corbett (Aaron Eckhart). Director John Cameron Mitchell’s previous film was the 2006 explicit underground movie about sexual behavior, Shortbus [and prior to that in 2001 the transsexual themed punk rock opus Hedwig and the Angry Inch, ed.]. In a way the questions continue in Rabbit Hole, in this case around the couple Becca and Howie Corbett. We are in the presence of a classic American drama disguised as a black comedy, well directed and well acted. 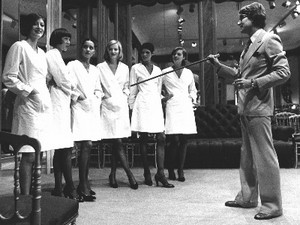 Two unorthodox documentary features stood out: L’amour Fou and Cave of Forgotten Dreams. L’Amour Fou (dir. Pierre Thoretton), which won the Fipresci Prize for Best film, relates the life of the creative French couturier Yves Saint-Laurent. L’amour fou channels the solitary soul of Yves Saint-Laurent in a very concrete way, traveling through the houses and objects that filled his life. His houses are now empty and all that is left are his collections of precious art from all over the world. His long-time companion and lover, Pierre Bergé, is our guide. We discover that the couple may have had their quarrels, but they stayed together until the end (Yves Saint-Laurent’s died in 2008). Frequent traveling shots, often lateral, across the now empty spaces of their past, coupled with melancholic piano music, transmits a sense of Yves Saint-Laurent the man. Like a litany, the music is an essential part of the movie, making the “mad love” (“L’amour Fou”) between the two men tangible. In the latter part of the movie Pierre Bergé has to sell the very important art collection they attained together. He has to learn to separate himself from the art collection which he shared with Saint-Laurent, giving us an uncommon insight into the great moments of love between them. 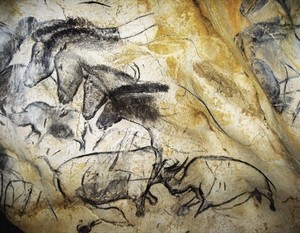 Another very enigmatic cinematographic object was the 3D documentary Cave of Forgotten Dreams, by Werner Herzog, which had to be viewed wearing special eye-glasses. The film centers on an exploration, and explanation, of the earliest known pictorial visions of mankind in the caves of Chauvet-Pont-d’Arc in Southern France (the caves were rediscovered in 1994). In the first twenty minutes the camera ventures underground to see these precious cave images. Herzog insists on the fact that they are like pre-cinema images (like a drawing of a horse with eight different legs, which can reproduce a form of Muybridge-like motion). In these underground views the use of 3D is totally justified, but less so in Herzog’s lengthy interviews with the French scientists who researched and studied the Chauvet caves. Herzog the chance-taker is again in rule breaking mode: It is unlikely that a 3D documentary will get much air time in our commercial cinemas; but the movie had to be done, if only to bring to our eyes the spectacular cultural and archeological importance of these caves.

In humble opinion, the two best movies of the ones I saw at TIFF 2010 were Mothers/Majki and Essential Killing.

The intriguing and fascinating Mothers/Majki (dir. Milcho Manchevski) is at once a movie about different women (not only mothers), and a movie about the cinema. Both of these aspects are set in the contemporary world of Macedonia (that, in fact, is quite universal also). The film is divided into three parts, set in three different locations. This structure recalls Manchevski’s stunning debut film, Before the Rain (1994). The first two episodes of Mothers, short in length, are clearly fiction. The third one, the longest, is more of a documentary. In the first story two girls, aged around ten, try to denounce a flasher by making up a story. They want to help a friend who really was approached by a flasher. They lie, using images taken with their cellular phones to provide false evidence. The police are not duped. In the second part, documentary filmmakers follow two elderly cousins, a man and a woman, who have not spoken to each other in sixteen years. These two cousins refuse to really participate in the movie. In a way, their resistance becomes the movie, and this is the only truth they can find. The third part follows the path of a real serial killer “specializing” in the killing of women (mostly mothers and elderly cleaning ladies). The judiciary inquiry reveals that the killer’s motive was partly a result of difficult relations with his own mother. 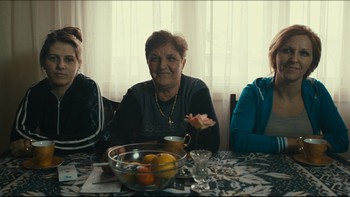 Mothers/Majki is about women fighting, in various forms, for survival, set across three different types of cities and three different age groups. The film is also about cinema because it shows and asks questions about different ways of representing “reality.” In both cases the theme boils down to perception, and the recreation of stories and of History. Does the truth really exist? The last scene shows us the two young girls of the first story using their cellular phone to take other pictures. Like in Before The Rain it is a “never ending circle.”

My favorite movie at this year’s TIFF was Essential Killing (dir. Jerzy Skolimosvksi). By returning to a way of making movies that I value so much –the cinema of Robert Bresson– the film was a reminder that cinema can still exist. Essential Killing is essential cinema. It is a form of prosecution against war; and the stupidity and nonsense of killing. Violence leads to nowhere. Blood (red) is everywhere, but each time we learn that it was spilled needlessly. This is a film with hardly any dialogue; the main character Mohammed (Vincent Gallo) doesn’t say a word. While ostensibly the story of a man who is hunted down like in an action movie, it is also a metaphysical movie made with great austerity (closer to the cited Bresson or Andrei Tarkovski). Some of the flashbacks in the film don’t appear very useful (like the ones about his life in Afghanistan, with his wife, children, and his association with the Taliban). But these flashbacks, like many other things in the movie, don’t tell the whole story. And this is what makes the film so powerful. Essential Killing will not please the general audience, but the overall cinematic work is real and essential.