The Film is the life, Mr. Renfield

Within, stood a tall old man, clean shaven save for a long white moustache, and clad in black from head to foot, without a single speck of colour about him anywhere. He held in his hand an antique silver lamp, in which the flame burned without chimney or globe of any kind, throwing long, quivering shadows as it flickered in the draught of the open door. The old man motioned me in with his right hand with a courtly gesture, saying in excellent English but with a strange intonation:-

“Welcome to my house ! Enter freely and of your own will !” He made no motion to step to meet me, but stood like a statue, as though his gesture of welcome fixed him into stone. The instant, however, that I had stepped over the threshold, he moved impulsively forward, and holding out his hand grasped mine with a strength which made me wince, and effect that was not lessened by the fact that it seemed as cold as ice – more like the hand of a dead than a living man. Again he said:-

“Welcome to my house, Come freely. Go safely. And leave some of the happiness you bring !”

With this simple but sinister introduction, Bram Stoker unleashed, upon an unsuspecting but receptive world, a character who would startle, repel and enthral its audience and it is for this reason that we celebrate the 100th birthday of the world’s most renowned vampire, Count Dracula. 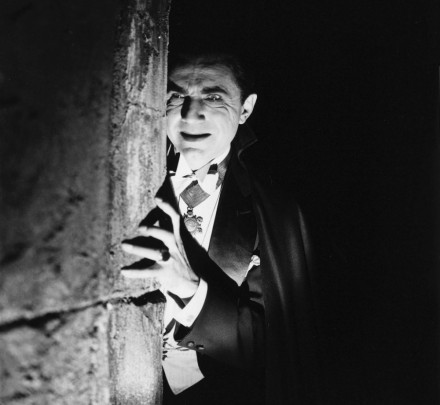 Although not generally classified as a literary masterpiece – Stoker’s work is not taught in schools alongside the works of Victorian contemporaries like Dickens or Wilde – Dracula has never been out of print since its publication in June 1897. Furthermore, the character of Count Dracula has developed a popular appeal unequalled by any other literary character. Recognised by children and adults alike, his image is used to sell cereal, batteries, chips, and he even teaches children how to count on Sesame Street. Can you imagine seeing Fagin or Heathcliff on the front of a lunchbox?

Born alongside cinema, Dracula has had, throughout its lifespan, a symbiotic relationship with film. True, it was not adapted until the early 1920’s when F. W. Murnau made an unlicensed version of the novel, Nosferatu, which would become a classic of German silent cinema. It has, however, been a consistent presence on the big screen ever since. There have been over eighty films made since Nosferatu, that have drawn upon the Dracula legend as either straight adaptations (Dracula 1930 Tod Browning, Dracula 1958 Terrence Fisher), sequels (Son of Dracula 1943, Robert Siodmak, Dracula Has Risen from the Grave 1968, Freddie Francis), pastiches (Love at First Bite 1979, Stan Dragoti, Dracula Dead and Loving It 1996, Mel Brooks), rip-offs (Dracula’s Dog 1977, Albert Brand, Dracula’s Widow 1988, Christopher Coppola) and spin offs (Blacula 1972, William Crane, Deafula 1975, Peter Wechsberg). Some even combine all four.

As a result of this film life, Dracula’s persona has, throughout the last century, grown and developed beyond the character penned by Stoker. Each film feeds the next by introducing new details from the novel, other vampire films, vampire legends and mythology or contemporary culture. For instance, Badham’s 1979 Dracula shares much in common with Browning’s version. Both films are adaptations of the same stage play rather than the novel, and both feature actors who had previously played Dracula on stage. Badham’s Dracula, Frank Langella, sports a tuxedo and cape throughout most of the film, a costume made famous by Bela Lugosi (who even asked to be buried in his cape). Although Badham’s film appears to borrow the spider-web imagery from the opening sequence of the 1930 film by creating a breathtaking design of sparkling webs overhanging Lucy (Kate Nelligan) as she dines in the Count’s home, it does so in order to subvert its meaning from the original film. In Browning’s film it is used to create a visual metaphor between the vampire and the spider, as Dracula lures Renfield into his own web. The point is driven home when Dracula rather mysteriously explains to Renfield, spooked by the size of his web on the staircase, “The spider spinning his web for the unwary fly. The blood is the life, Mr Renfield”. Strange dialogue for a count only interested in real estate. It is a wonder that Renfield did not suspect something.

In Badham’s film, we are expected to draw the same association between Langella’s Dracula and the spider, until it becomes clear that Lucy (his potential victim) is not being lured into the web but chooses to go out of a conscious attraction to Dracula. The imagery is further subverted by the notion that Dracula feels a similar genuine affection for Lucy.

Each version of Dracula carries with it all of the accumulated knowledge that audiences have gained from each earlier film. As a result, the legend evolves and the monster becomes more threatening, more sexual, and, in recent years, more romantic.

This brings us to Bram Stoker’s Dracula which, as the title indicates, purports to be a faithful adaptation of the novel. It does use the epistolary structure of the novel adopting multiple points of view taken from letters, newspapers and journal entries. It reintroduces two of Lucy’s suitors, Quincy Morris and Arthur Holmwood, who are often cut out of other versions, and it sets the climax of the film in Transylvania as the heroes chase Dracula back to his castle. 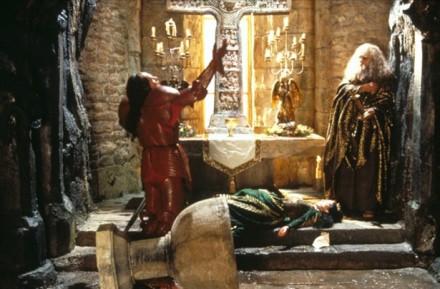 Despite these details, however, Francis Ford Coppola’s film is far more faithful to the century of film history that preceded the film’s production than to anything in the novel. Coppola textualizes cinema history within his narrative creating a film that is more a reflection on the history of Dracula on film than on Dracula himself. The connection between Dracula and the birth of cinema is established when he emerges in the light of day for the first time, in Victorian London. For a few moments he is shot walking along the street in the jerky, fast motion traditionally associated today with early cinema, captured for the first time by the medium that is truly responsible for his immortality. He later accompanies Mina to a screening of the Cinematograph and praises the wonders of modern science to create such magic.

In Bram Stoker’s Dracula, the film magic that so impressed Dracula is a key component to the film, which is why Coppola and his second unit director Roman Coppola chose to shoot the film in a style that consciously reflects the early days of filmmaking. Rather than depending on modern technology for their special F/X, they utilise traditional in-camera techniques such a pixilation, reverse printing and double exposure. Dracula’s point of view, unavailable in the novel as the story is exclusively told from the point of view of the vampire hunters, is mediated through these film techniques.

Dracula’s approach to Lucy’s home, shot from his direct point-of-view, is pixilated with each cut bringing him closer to his prey. As Mina transforms into a vampire, she begins to develop this inhuman vision. As she watches Dracula’s carriage approach, pursued by Johnathan Harker and the others, we cut to her point of view as her vision, pixilated at a random shutter speed, appears to zoom in on the action.

Similarly Coppola (both of them) uses reverse motion to create the appearance of inhuman movement for the vampires. When Lucy, confronted by Van Helsing, retreats to her coffin, she seems to slink and slither back into its confines. In reality, it is simply a shot of the actress climbing out of the coffin, printed in reverse.

This self-conscious use of in-camera special F/X illustrates a privileged relationship between Dracula (as well as his vampire brides) and film. While the human characters create the appearance of literary faithfulness with their narration, it is Dracula’s point of view, as his silhouette is superimposed over the actions of the others, that commands the film.

The film also makes particular reference to earlier Dracula adaptations. The use of expressionist shadows, which seem to act independently of their owner, is reminiscent of Nosferatu, while Gary Oldman’s performance when delivering lines from the novel, such as “I never drink…wine” or “Children of the night…what music they make” echoes with the voices of his predecessors, particularly Bela Lugosi. This is emphasised by his knowing grin and the relish with which Oldman delivers his lines.

Oldman’s many costume changes from Old to Young Count, wolfman to giant bat, not only illustrate his monstrosity but also the malleability of the film Dracula. On film he can be, and is in this version, every possible interpretation of the vampire: aristocrat, romantic lover, monster and tragic hero.

Like film itself, Dracula as we know him today is but a trick of light, that has been gradually constructed over the past century. By transcending his literary birth, Dracula has found new life, and immortality. 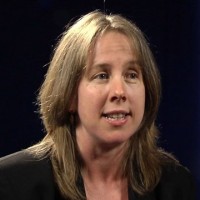 Stacey Abbott is a Reader in Film and Television at the University of Roehampton. She is the author of Celluloid Vampires (University of Texas Press 2007) and Angel: TV Milestone (Wayne State University Press 2008-9), and co-author, with Lorna Jowett, of TV Horror: Investigating the Dark Side of the Small Screen (I. B. Tauris 2012). She is currently writing a book on the 21st century vampire and zombie in film and television