The above epigraph could describe not only America’s involvement in Vietnam, but also its filmic output during the 70’s. Perhaps it is fitting that Apocalypse Now (1979) closes that decade’s self-analysis of the American soul. Straw Dogs (1971), arguably Sam Peckinpah’s best film, certainly would herald the beginning of American cinema’s most interesting decade. Regardless of what one might think of Straw Dogs, it has now been given the classic treatment – which lends a sheen of respectability – by the Criterion group, earning its “limited availability # 182” in its ongoing reappraisal of what are considered important works of film art. 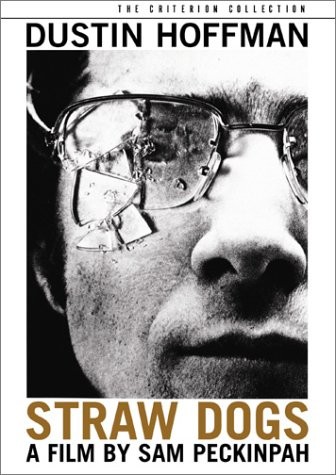 Straw Dogs has been available on DVD before in a no frills edition put out by Anchor Bay Entertainment in late 1998. The transfer was a considerable improvement over the 20th Century Fox VHS copy that had been the last word on this title for the longest time. The initial DVD promised an “uncut” version of the film; quick shots during the infamous rape scene had been restored to intensify the experience (as if any were needed). Anchor Bay did succeed in doing the film justice, but the edition was sadly and frustratingly lacking in any extras that could possibly elucidate the filmmaker’s much criticized intention.

The Criterion DVD edition goes a long way to help in this respect, and succeeds in many ways, albeit with a few minor reservations. The set is a double disc which has the feature (with available commentary by Peckinpah scholar Stephen Prince) on disc 1, and supplementary material on disc 2.

The supplements include an 82 minute documentary on Peckinpah including interviews with close friends and associates. There is a disclaimer at the beginning which states that excerpts from his films have been deleted from this version to avoid legal issues of copyright. This is unfortunate since such scenes would have served to contextualize the comments from the various participants. The documentary is very good, but left me wanting more insight into the film presented here.

At 26 minutes, On Location: Dustin Hoffman gives us a behind the scenes look at Hoffman during the making of the film and concentrates on his acting method. No answers to the nagging motivations behind the film will be found here. Two contemporary video interviews, one with producer Daniel Melnick and one with a refreshing Susan George, are the supplement highlights. George delves deeply into her character’s emotional baggage and shows a surprising amount of loyalty to her director, despite being put through extremely rough paces by Peckinpah (as implied in the interview). A few Peckinpah letters are reproduced to help the viewer reexamine the film’s central ideas. The trailer and some TV spots round off the supplementary disc nicely.

Now we come to the main disc and the feature itself. The transfer is enhanced for 16:9 TVs and the framing accurately reflects its theatrical 1.78:1 aspect ratio. Anchor Bay has a well-deserved reputation for giving the best transfers that can be found for the films they distribute, making it difficult for Criterion to improve on the overall presentation. However, and perhaps not surprisingly, Criterion lived up to the challenge. This version is a distinct improvement in color tones and has no digital artefacting whatsoever. The light and dark contrast is extremely well balanced – probably the best I’ve seen in a film with several dark nighttime exterior shots – reproducing great detail in the dark images. The audio is presented in its original mono soundtrack, and does not suffer in the least from its lack of being remastered in 5.1 surround. (A treatment which is often done to older films these days on DVD without taking care of accurately reproducing the intent of the filmmaker who did not have such resources at the time.) The feature disc alone is worth the purchase price.

Stephen Prince’s commentary track provides much insight, and an interesting reading of the film, but borders on being a tad too didactic for my liking. I did not want to be led by the hand through the film’s exploration of man’s relationship to violence. Partly because I had my own riginal ideas on the themes explored and found them frustratingly confounded after listening to Mr. Prince. But maybe that is part of the fun and value of commentary tracks.

David Sumner’s (Dustin Hoffman) voyage of self-discovery has lines of inquiry that can lead in many different directions (as Prince makes clear). The film as a whole, even with its misogynist leanings, has great poignancy even in today’s jaded cinematic terms. What this film makes plain is Peckinpah’s mastery of the medium. The editing is flawless and tightly tied in to the narrative so that dialogue and cutting become closely intertwined; this is one of the ways the film communicates its ideas about repressed aggression.

The scene where David must take a stand – something Amy (Susan George) faults him for early in the film – clearly illustrates this point. Henry Niles (an uncredited David Warner) has just been moved into the Sumner house, and when the English locals want Sumner to turn Niles over to them, he replies: “he’s my responsibility”. One of the lads (who was involved in the rape scene earlier) asks him “Why?” The scene cuts back to Sumner, and silence for a few seconds until he answers: “This my house.” The scene cuts to a brief shot of Tom Hedden (Peter Vaughn) outside the farmhouse loading his shotgun, then cuts back to Sumner inside. David, who has finally taken a stand, has made his intentions clear and the consequences, implied by Hedden’s cocked rifle, must inexorably lead to violence.

This has more than a hint of irony since violence is the one thing the reserved mathematician Sumner left America for in the first place, which makes the closing lines of the film much more meaningful: Niles: “I don’t know my way home.” Sumner’s reply: “That’s O.K., I don’t either.” Although Sumner seems to feel that he has found something within himself which has allowed him to “defend” his property, he ends up confirming that he is still a person without a sense of self. This feeling of loss and uncertainty must be understood within the broader context of the US nation’s loss of innocence in the political climate of the late 1960s, early 1970s. I will leave the rest of the film and its infamous status up to anyone else who may want to take the plunge into its dark corners.

A big thanks to Criterion for giving us the last word on what I consider the best American film of the 70s. I would urge anyone considering the purchase to hurry up as I believe the licensing of this title has a very limited run and Straw Dogs will quickly become one of those Criterion out-of-print DVDs that fetch a tidy return on Ebay.