The Song at Midnight

The Chinese Phantom of the Opera

Yeban gesheng/The Song at Midnight (1937, China, Weibang Ma-Xu) is an oddball mixture of horror film, propaganda piece and musical; it rates historical importance as the first acknowledged Chinese horror film: a Chinese version of the famous Gaston Leroux Phantom of the Opera novel from 1910. It opens with a small actors troupe arriving at an old theatre to rehearse an upcoming opera. This plot foreshadows many later Italian (and Eurohorror) films where a group of actors or artists arrive at a castle for rest or work only to encounter death or the supernatural (The Vampire and the Ballerina, Renato Polselli, 1962, The Vampire of the Opera, Renato Polselli, 1964, The Playgirls and the Vampire, Piero Regnoli, 1964, and The Bloody Pit of Horror, Massimo Pupillo, 1965). The horror pedigree is established by the old, hunchback with a horribly disfigured face who greets them at the door. The acting troupe’s quiet, nocturnal introduction by the hunchback to the abandoned, cobwebbed theatre is played strictly for gothic mood that sets up the Universal Studios horror style. Along with these theatre prep scenes is the enigmatic recurring image of a young woman, blankly staring outward from her balcony at a man singing from afar, seen only in silhouette. 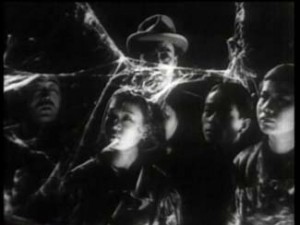 The mystery man, Song Danping, is singing the titular song, a torrid story about his rage over a lost love and the loneliness he feels for the woman (Li Xiaoxia) he can no longer love. While the man sings, the camera alternates between his silhouetted figure and the woman staring longingly into off screen space. The source of this image will only be later revealed, giving the film an almost modernist narrative temporal structure. 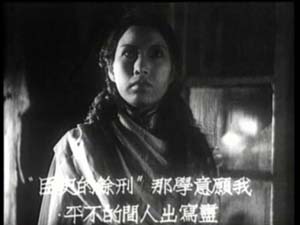 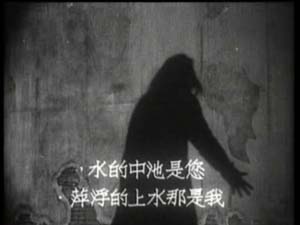 One of the younger singer/actors in the troupe, Sun Xiao-au, stays around after a poor rehearsal and gets an unexpected singing lesson from a disembodied voice from above, briefly seen in shadow. This character is the silhouetted figure from the earlier scene, a hooded Erik the Phantom type character, Song Danping, who befriends the young man and recounts his life story in a long flashback that takes us back ten years. Song Danping explains to his potential protégé Sun Xiao-au that he was a rising opera star whose life was destroyed by Li’s jealous admirer, Tang Jun, who convinced Li’s father, a sadistic feudal lord, to punish Song (whom he refers to as a ‘lowly’ actor) for his indiscretions. The hero Song, who is also affiliated with an underground revolutionary group (the subtitles refer to it as the Kuomintang), is kidnapped by the feudal lord and whipped by a bare-chested muscular man (the whipping is cleverly intercut with close-ups of sadistic onlookers taking pleasure in the whipping). Rather than discouraging Li from continuing to see Song, this act of brutality only increases Li’s resolve and love for Song. Tang visits Li with amorous intent, but Li rebuffs and chastises Tang for conspiring to harm Song for his own gain. Angered by Li’s resolve, Tang ambushes Song outside the theatre later that night, throwing nitric acid onto his face. 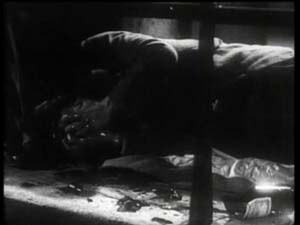 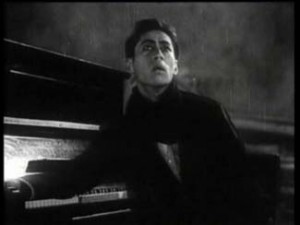 Sun hears a voice from above

Song’s theatre friends care for him after the acid incident, bandaging his face and hands (shades of the Universal Invisible Man, 1933). The unrolling of his bandages marks the film’s highlight, especially as far as the horror pedigree goes, where all the fleeting expressionist moments (angled shots, hand-held subjective shots, large shadows) come to the forefront. The camera stays behind the chair Song is sitting in, with his head mostly below frame, focusing on the expressions of terror on the faces of Song’s mother, sister, niece (?), doctor and his longtime servant friend, the long-haired, facially disfigured old man. Once they see his face, they recoil back in terror, with the camera tracking toward their terrified bodies. 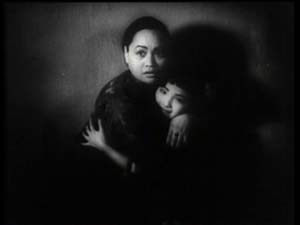 Song stands up and walks toward a mirror at the other side of the room. After a few long beats, the shot cuts to his burned face staring back at him in the mirror. The shot lingers for a while before cutting to a longer shot of him screaming and smashing the mirror. He pleads with his friends to announce his death because he can longer love like he once did and does not want Li Xiaoxia to see him physically disfigured. 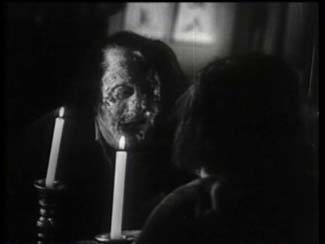 At this point the narrative cuts back to the present where we get another impressive scene where Song reveals his disfigured face to his new friend, Sun, and Sun learns that (in Phantom of the Opera style) Song Danping has been ‘haunting’ the theatre ever since in search of the right new male star to take over both his singing mantle and –more importantly– to become a surrogate lover for the woman (from the balcony scene) he loved but could not have, Li Xiaoxia. This unveiling (unmasking in most accounts) of the Phantom’s disfigured face to a man rather than a female love interest marks one of the most radical twists from the American (and British) versions of the Phantom of the Opera story. The relationship between the phantom figure and another male is one of friendship rather than unrequited love. Indeed, one of the film’s sub-themes is the the young actor Sun’s political awakening to the revolutionary cause. As Robinson notes, “[director] Maxu develops much more complex and ambiguous relationships by making the protégé male” (44).

When Li receives the news of Song’s supposed death, the film depicts her anguish through a series of expressionist angles and subjective ‘spinning’ camera movements. Li’s father is angered to see his daughter in a state of hysteria. Since the news of Song’s death, Li is reduced to a near state of catatonia, receiving temporary solace only from the mysterious singing voice she hears from across her balcony. She is so traumatized by the news of Song’s death that when she follows Sun’s singing voice (trained by Song) to its source in the woods outside her bedroom window, she thinks Sun is actually Song. The images of Li in a long white gown sweeping along the floor as she walks hypnotically toward the sound of the voice through her bedroom and then through the mist shrouded woods to meet Sun seems more like a scene out of Dracula than Phantom of the Opera, giving further evidence of director Maxu Weibang’s sourcing of the Universal horror films in general. 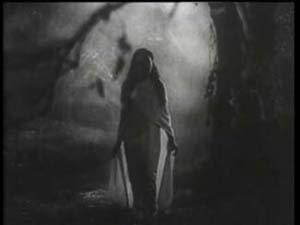 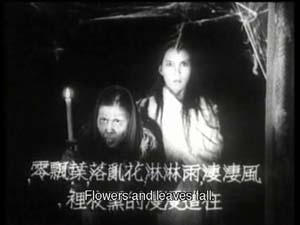 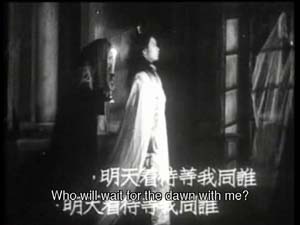 Although Song has grown to admire Sun and sees him as a friend, he is angered (disappointed would be perhaps more accurate) when he learns that Sun has a fiancée, Lui Die, and hence can not ‘replace’ him as Li’s lover as he had hoped (he also chooses him because he appears to be a hopeful, confident man). At this point Song begins to laugh, cackle and behave more like a madman than the sympathetic, tragic figure he has been and largely remains a character which, as David Robinson notes, sets him apart from his Western counterparts who are more malevolent, violent or psychotic: “The major departure from Leroux and other film adaptations is that the Phantom is the unequivocal protagonist, and wholly benevolent, even though at the end he becomes the instrument of killing his old malefactor when the feudal lord menaces the young singer and his fiancée” (44). 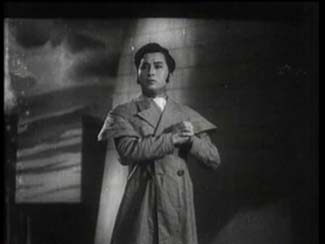 Song Danping in his prime

For the final act we begin to see his burned face regularly, but it must be said that the make-up, in black and white, holds up well, aided by long, stringy unkempt hair, although his face is less terrifying than that of the old man who serves as his Igor-like assistant. According to Robinson, director Maxu Weibang made the bold move of changing the look of the Phantom’s make-up in the 1941 sequel Midnight Song 2/??Yeban gesheng xuji?? to align it closer to Lon Chaney’s makeup for his 1925 version, speculating that Maxu must have screened Chaney’s version in the interim (45).

As in many Chinese films of this era, the villain –the despicable Tang Jun– is a good looking, rich, young man beyond the approved political stripe, in this case supporting the feudal lord general in political opposition to the left political leanings of Song. Tang is the owner of the theatre where Sun’s fiancée Lui Die works, and begins to court her. Tang visits Die in her dressing room, and tries to impose himself on her sexually, but she rebuffs his gruff amorous advances. Sun returns from his completed stage performance just in time to stop Tang’s physical assault on Lui, but Tang pulls out a revolver and reacts by shooting Die (although she does not die, since we see her in the film’s closing two-shot with Sun). Before Tang can leave the room, a cackling Song enters brandishing a bottle of acid, and yelling at Tang, “Do you recognize the man you murdered ten years ago…Song Danping?” The film’s climax begins with this extended chase/fist-fight between Song and Tang, which takes place across several rooms, making its way up to a top room, with the villain falling out an open window to his death. Song is then chased by a torch-bearing vigilante mob (a rousing finale borrowed from the famous Universal Studio horror films of the 1930s); the chase scene is intercut with a scene of Sun recounting Song’s fate to Li, clearing her deception by telling her that that Song is not dead. The camera dollies back dramatically from a stunned Li, and then cuts to a series of subjective lateral swish pans and then back to Li fainting to the floor (is she dead we wonder?). The climax picks up again with Song being chased up the tower of a building to the roof (perhaps lifted from the ending of Hunchback of Notre Dame, 1923, and foreshadowing the rooftop climax of Terence Fisher’s Curse of the Werewolf, 1961). With nothing left to live for, Song throws himself into the river. The film ends on the posed image of the second hero Sun embracing his soon-to-be wife Lui Die, singing one of the many political rally tunes made famous by Song. 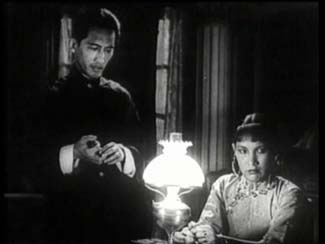 Tang the villain and Li the heroine

Filmed during the beginning of the Sino-Japan war (1937-1945), the film takes every chance to throw in a propaganda message (David Robinson calls the film ‘nationalistic and anti-feudal’). One of the play-within-the films is a French Revolution-inspired war story; other plays are littered with political sing-songs espousing freedom, liberty, etc.; the lyrics were written by Tian Han, “a left-wing writer who at the time was under house arrest by the Kuomintang” (45), and the political turmoil between the warring feudal warlords across much of China, the in-power Nationalists led by Chiang Kai-Shek and the Communists is felt throughout. As Robinson writes, “Song Danping is portrayed as a fugitive revolutionary, using the theatre as a sanctuary, and the characterizations of the evil feudal lord has clear references to the chaotic political struggles of the 1920s” (45). This political subtext adds a layer of social relevance missing in pretty much every previous and subsequent film version of the famous Gaston Leroux story.