Shirin as Described by Kiarostami

It may be an odd experience to sit in a dark movie theater, stare at the screen and see fellow audience members watching a motion picture. Personally, I believe the experience of watching a movie in which the sound of the story that we hear is different from the pictures that we watch can be more interesting.

Shirin is the latest feature film by Iranian auteur Abbas Kiarostami. It features simple close-ups of the faces of 113 actresses who are watching a movie.

After watching the film and talking with Mr. Kiarostami, I found out that the women, whose faces appeared in perpendicular frames in the film were not actually watching a movie at all; a few fixed spots had been installed above the camera and they were acting with Kiarostami’s special improvisational technique.

What makes the experience doubly interesting is to learn that the story was decided on after shooting was over. It is the love story of Khosro, Shirin, and Farhad, a masterpiece by the great Iranian poet Nezami Ganjavi. The work features effective editing and an attention to details which, as always, render Kiarostami’s movies simple, different and absorbing.

Abbas Kiarostami characteristically attaches a special significance to audiences. In his latest production, Shirin, he goes as far as explicitly suggesting that the silver screen would be non-existent in the absence of audiences. 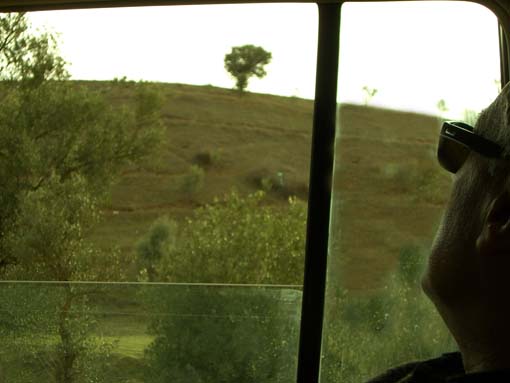 Offscreen. How did it occur to you to make such a movie?

Abbas Kiarostami. It was a response to an old temptation, a very old one dating back to the days when I had become a director. It was all about watching the audiences. I believe it has its root in the fact that, in the absence of an audience, no production could be dubbed a production on its own. It is not that I want to grease the palms of audiences. I don’t seek to lift the stature of the audience at the expense of the production. What I am saying is that the moment an audience is affected by a movie, the creation is that special moment, not the film itself. There is no such thing as a movie before the projector is switched on and after the theatre’s lights are turned off. A film which consists of many frames that is placed in a box, or works by a digital system, etc., is nothing like a painting or statue to prompt us to think of it as a mass or an identity. I believe the identity of the silver screen hinges on audiences, in such a moment that it sees its audience. So a production takes shape in the moment we see the audience. In other words, at a certain juncture audiences and the movie become one.

I believe this work features two movies. I mean, we don’t look at the production in the abstract; rather, we look at its impact on audiences. This is a very old phenomenon evident in some other films I have directed. For instance, in Under the Olive Trees the moment there is an argument between Ms. Shiva and Hussein with the construction worker who has dropped the bricks, we see the traffic jam without actually seeing it. I mean on their faces we see the whole atmosphere without seeing the actual congestion. It is the case in several recent productions of mine. We see the film through the impact it has on people who are watching a movie.

I had a very radical feeling and wanted to watch the audience in private. To me watching people is more interesting than anything else. This is a very old feeling. It has nothing to do with directing. It is a deep and bold gaze; similar to that of children in the cradle, quite straightforward. There are moments in this film which are just like a gift to me. It is a blessing to be able to look at someone so closely to detect feelings on their faces.

Offscreen: Where does Shirin stand in the list of your works, particularly as your productions are becoming more minimal?

AK. Any production is a follow-up to previous works… but I didn’t mean to render it minimal because it is not my responsibility to summarize a production this much.

Offscreen: But that is what is happening. You once quoted a critic as saying that Shirin is the most radical film of Kiarostami’s in its taking everything out of the frame.

AK. It is because I love simplicity. For instance, in the books I am working on right now, for example Rumi’s Diwan-e Shams, I opt for poems which are closer to daily conversations and simple modern language. I would not opt for poems featuring very difficult words. Although some of them are great because of their rhythm, and their lyrics.

Offscreen: Now that the film is over, how do you find it when you watch it?

AK. I truly like this film very much, for a number of reasons.

First of all, the camera is fixed. Second it is “close-up” in a special sense of the word. Otherwise, I like long shots. One can see the mentality of individuals in close-ups.

Offscreen: Why did you opt for an all-female cast?

AK: Because women are more beautiful, complicated and sensational. A combination of these three qualities makes them perfect candidates for movies and for being looked at. To develop an insight into such complexity, there is no other way than watching, which is the first step on the path to research. Besides, women are more passionate. Being in love is part of their definition.

Offscreen: Tell us about the film and its script.

AK: The story was not important to me. I mean, I had not pinned my hopes on the story. I just thought they were watching a melodrama film. But I was uncertain about which film. During the course of production I came across things which I found congenial.
Nezami—who lived almost eight centuries ago—was not only able to make drama. When it came to dramatic features his works are believed to be as good as Shakespeare’s, but also, he had a perfect understanding of women. The image he created of women was very positive; he portrayed women as being capable and self-reliant. Such personalities are rarely seen even today.

Although Shirin maintains all the feminine, intricate features of women, it proves quite strong. Nezami has created a great picture of a love triangle for us. A triangle one side of which features a king, and another an architect and mathematician, a statue maker, or an able-bodied person capable of conveying confidence to women. I believe they were both ideal for women. The story revolves around a love triangle with particular problems.

Offscreen: What reaction do you think your movie will draw?

AK: I cannot guess. “I don’t care at all” is quite a cliché these days because many directors begin to use that expression after a very brief experience in filmmaking. The fact that I have never uttered that sentence over the years makes me feel comfortable saying it right now. I am not saying I don’t care whether they like the film or not. What I am saying is that their not liking the movie won’t affect my feelings about it. I believe I have already answered this question without answering it, by watching the film several times; whenever someone has watched the film, I have watched it too. It comes despite the fact that I have never watched my own movies, even once. Actually, Close-up is an exception. I have watched it three or four times.

Offscreen: Do you agree that this film is ahead of its time or is very different?

Maybe it is a means to object, a reaction to films which show everything. Someone who had seen the movie told me, and I quote, when I was watching the film, I just wanted to see the things they were watching. Do I want to see what they were watching, I asked myself? The answer was no way, no way. I have seen those scenes again and again: horses which appear on the screen and neigh; settings which have been built on not-so-solid evidence to portray life 7,000 years ago. These decorations constantly reveal their hollow nature. I believe it is new and innovative. It features things I have never had the chance to look at from a very close distance. Whenever I miss those moments, I can watch a reconstructed TV series.

What I am seeing now is actually two films with a ticket. Because we have to think about the impact of something other than the thing itself.

Offscreen: When we hear a story, we naturally create an image in our imagination. But here there are images to look at. What do you think about the fact that in Shirin we do not see images related to the story we hear?

AK: Are you saying I have constrained your imagination…?

Offscreen: We are in the habit of imagining what we hear, for example, a story on the radio.

AK: You mean when I am looking at someone’s face, I am not as free as when I am listening to radio to let my imagination loose?

Offscreen: Exactly, and this is not what a human is used to under normal circumstances.

AK: No. This is not radio. Although you are free to imagine what you wish to, you have to see what I am showing. In fact, it is a combination of both freedom and restriction. I suggest you watch another world which is more attractive than the story. I believe if you dare let go of the story, you will come across a new thing which is the Cinema itself. In fact, I suggest you let go of the story and just keep your eyes on the screen.