50th Anniversary of The Good, the Bad and the Ugly

Although Sad Hill Unearthed (2017, Guillermo de Oliveira) may not be a great documentary it is brimming with strong emotions and cinephilic energy. It is a film that exists in a similar universe as Cinemania and Room 237, two films that explore extreme cinephilia. The film is about a group of thirty-something Spanish men, Sergio Garcia Hernández, David Alba Romero, Diego Montero, and Joseba del Valle, who happen to live near where the unforgettable climax of The Good, the Bad and the Ugly was filmed, the Northern Spain city of Burgos. From the documentary we learn of the different locations in which the film was shot, including the location where most Spaghetti westerns were filmed, Almeira, Spain. Almeira became a popular location because it was the only place in Europe which had a desert that looked like the American west. But TGTBATU was also filmed in other locations in Spain, which tends to get overlooked in accounts of the film. One of the aims of this film for the men involved is to give this “other” location its due recognition. In fact they seem bitter if not angry at how “their” city has been overlooked. These other locations are specified in the documentary following along three towns near Burgos, Covarrubias, Salas de los Infantes and Santo Domingo de Silos; these were the locations for the Bettervile prisoner’s war camp, in the town of Carazo –which in the context of the film is an anachronistic reference to a World War two concentration camp— the scene of the Langston Bridge, also based on a real Civil War battle, and which ends with the bridge being blown up by Blondie and Tuco, which was built on the Arlanza River, and the monastery of San Antonio, shot at the San Pedro monastery near the Arlanza River location.

The centerpiece of the film, however, is the Sad Hill Cemetery scene shot in the middle of a triangle of towns near Burgos, Contreras, Carazo and Santo Domingo de Silos. This personal connection of living near the original location has informed the love the members of the Sad Hill Cultural Association have for the film and led them to enact on their one collective passion. It is clear in watching this film that these cinephiles of Burgos, who started the Sad Hill Cultural Association in 2015, share a special bond with The Good, the Bad and the Ugly. In particular the climax in Sad Hill Cemetery, one of the most iconic scenes in film history and perhaps the greatest marriage of image and music in film (such was Morricone’s claim). So iconic that the heavy metal band Metallica has for thirty plus years made “Ecstasy of Gold”, the song Morricone wrote for this scene, their signature song when playing live, beginning every concert with an intro tape of that song. 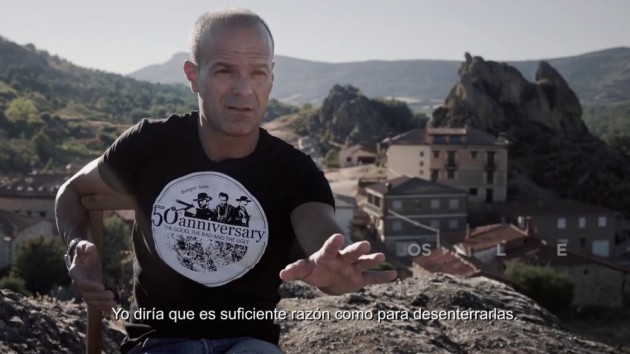 The documentary starts and ends with one of these Metallica concerts, with singer/guitarist James Hetfield –who is also interviewed– addressing an audience in Gothenburg, Sweden. This use of one of the greatest metal bands of all time gives the documentary some street cred. As does the interviews with other notables, including Joe Dante, who says he can’t remember ever being as exhilarated by a movie as when he first saw The Good, the Bad and the Ugly, one of two the editors of The Good, the Bad and the Ugly, Eugenio Alabiso (Nino Baragli being the other), the daughter of the great, late production/art designer Carlo Simi, Giuditta Simi, assistant art director Carlo Leva, composer Ennio Morricone, and Clint Eastwood, who appears as a surprise live video feed before the special 50th anniversary screening of the film at the Sad Hill location, Spanish director Álex De la Iglesia, and Leone biographer and Western genre scholar Sir Christopher Frayling.

The restoration of the location/set took them the better part of two years, and included digging out about seven inches of earth to get to the ‘sacred’ stone pavement that forms the inner circle of the arena, building the stone wall and making and staking in place the tombs and their wood headstones, the headstones marked with the names of key crew and cast members, friends and family members, and people who helped fund the project (as part of the crowdfunding campaign people who donated $18 would have their name painted onto a wooden cross on a gravestone). The film includes some wonderful vintage interviews –like an interview with Leone where he describes the film’s plot while wolfing down a plate of spaghetti and red wine– and some new interviews with crew or cast members reminiscing. For example, an extra recalls the moments leading up to the seven camera set-up of the bridge explosion, and how a communication mix-up led to the bridge being detonated without the cameras filming. And Eastwood explains how they went to another location to film for two weeks while the crew rebuilt the bridge so they could return for take two of the bridge explosion (a story which reminded me of a similar incident explained in the documentary on Tarkovsky’s The Sacrifice, Directed by Andrei Tarkovsky (Michal Leszcylowski, 1986), where a camera glitch during the penultimate long take of the house burning scene required the house to be rebuilt for a second try). 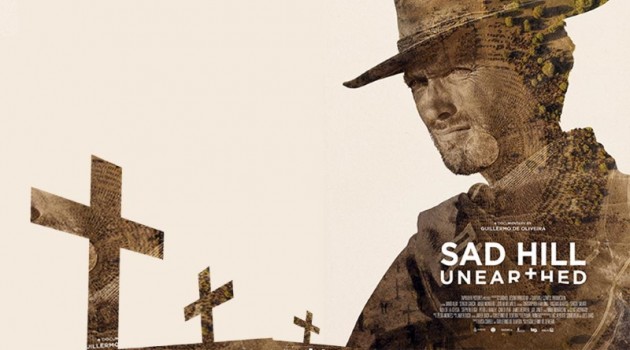 The most amazing thing for the Spanish men who organized this event was that so many people from North American and Europe came to work as volunteers, devoting their time, energy and expense to respond to a Facebook page they started to promote their project and solicit help. They were stunned at how many people came from afar (mainly Canada, United States and Europe) to help them achieve their dream. Images of these tourists mulling about the restored set, taking photos and sharing in the joy make their way into the documentary too. Sad Hill Unearthed was planned to coincide with the 50th anniversary of the great 1966 Leone film, and the culmination of their endeavor to return the location to its original glory. They all reminisce about seeing the film as young kids and when they first visited the set, which was left as it was but had succumbed to the ravages of time. Joseba del Valle tells the touching story of the day he said goodbye to his ill Dad as he went to begin the digging at the Sad Hill cemetery; and then received news at the end of that day that his father had died; and then how he memorialized his father by naming him on one of the graves. These early reminisces from the Spanish men are some of the highlights of the film, setting up the nostalgic tone that the film slowly works with and against as it moves forward to the present and the screening of the film.

When they initially found the location for the showdown, from atop a nearby mountain distance, the concentric circles which formed the circular arena were barely visible. The iconic cobble-stoned center of the arena, which was flanked by a short stone wall, had sunken below the surrounding desert earth. These men came up with the idea of setting back time by literally ‘unearthing’, that is digging to expose the stones, and in some cases restoring new ones. The act of travelling to the famous location is referred to as a pilgrimage by the men, but even some of the visitors express their presence there in the same way; the most notable interlocuters are a trio of young Canadian men, Will Ross, Devan Scott and Daniel Jeffery who are filmed visiting the Sad Hill location for the first time in September 2014 and who are visibly moved and speak eloquently about their pilgrimage and its place in their life.

This arena which forms the set for the classic showdown between the three titular characters was a culmination of a circular motif present throughout the film, beginning in the second scene of the film, when bounty hunter Angel Eyes (aka the Bad) brings his killer skills down on a humble family of farmers. In this scene we see a young dark-skinned boy riding a mule around a water wheel situated in front of another circular arena similar to the one at the end, as he sees a man on horseback riding in from the distance (this scene is an homage to the opening of Shane, 1954).

Surrounding the round cobblestone arena are the hundreds of graves which are also uniquely in a circular formation –unique in that such real exterior graves are normally lined in horizontally rows. Initially the script only called for a few dozen graves but Leone was inspired to make the set much grander and more epic and the art direction team had to build hundreds of graves from scratch. The arena where the classic finale is staged recalls the many battles in the Roman Coliseum, the three gunfighters assuming the role of the gladiators set for battle. Leone himself referred to it as the “Arena of Destiny”. The allusion to Roman antiquity is also a reflexive gesture to the Italian peplum films of the late 1950s, early 1960s in which Leone made his screen debut with The Colossus of Rhodes (1961). 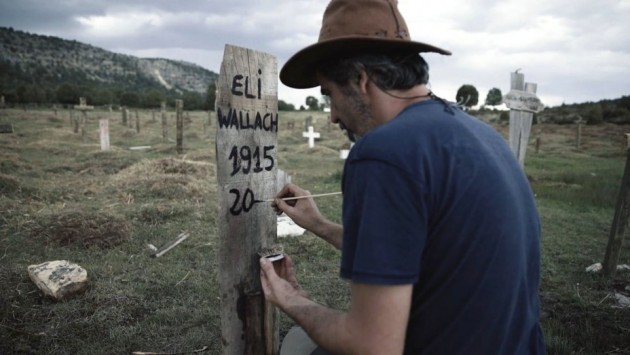 The film climaxes, predictably, with the outdoor screening of the film, with the members of the Sad Hill Cultural Association all sitting in the front row. Their excitement is palpable, but nothing could have prepared them for the surprise thank you greeting through video satellite from Clint Eastwood. The men jump in joy, like care-free children. The screening brings their two year journey to a fulfilling conclusion, one they will treasure until the day they too will settle into their own “Sad Hill” cemetery.

An icon of heavy metal music, American, Spanish, Italian filmmakers, academics and cinephiles, Europeans young and old, Canadians, Americans, The Good, the Bad and the Ugly has touched them all. And this from an Italian popular film about a decisive moment in American history. Is there an equivalent American Western that has touched people as much ? Perhaps The Searchers? Frayling recalls that an Italian critic, in an attempt to denigrate the film, called it a “melodrama”. He added, yes with the ‘drama’ supplied by Leone, and the ‘melo’ supplied by Morricone. Sad Hill Unearthed is a reminder of the power of cinema to touch disparate people. How people treat cinema as a memento mori, a Latin word that means, “remember (that you have) to die”. Which makes the setting of this film, a graveyard, all the more fitting. And the main act of “unearthing” the stones an apt metaphor for the collective memory of all the fans who have been touched and moved by perhaps the greatest western ever made. 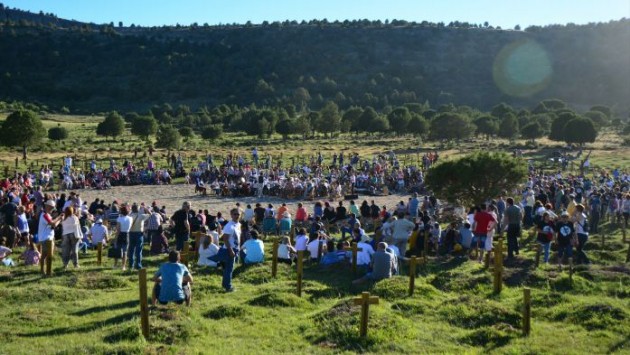 PS: Sad Hill Unearthed has a companion piece which can be viewed currently on YouTube, Sad Hill, Clint Eastwood and Burgos as a Witness https://www.youtube.com/watch?v=sdNZXusymuU&t=169s which includes interviews with the members of the Sad Hill Cultural Association, three Spanish men who had bit roles in the film, Domingo Contreras Camarero (the harmonica player in the torture scene), Eusebio Ibáñez Moral (the friar in the infirmary scene), and Abilio Abad Izquierdo; and Clint Eastwood’s son Kyle Eastwood.

BBC story on the origins of the Sad Hill Cultural Association https://www.bbc.com/news/world-europe-40718253