LEGEND FILMS releases perhaps one of the more obscure science-fiction or nature-fiction films of the seventies in a wonderful (albeit bare-bones) DVD; whoever is responsible for selecting these titles for licensed releases should be congratulated for this one. The film begins on an image of what appears to be outer space and then “Phase I” is super-imposed on the upper right hand corner of the frame. The Michael Murphy character (Lesco) narrates the opening sequence, and sets the stage for what is to come. He talks of an event that occurred in space and the anticipated effects expected by the Earth’s scientific community which do not seem to materialize; no one in the scientific community immediately notices that the effect does indeed alter something in the Earth’s ant colonies. Different species of ants congregate and instead of destroying each other, seem to be communicating in a way that suggests some ulterior yet unknown purpose. 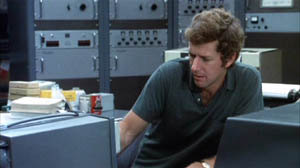 The narration is then taken up by a scientist (Hubbs) played by veteran British actor Nigel Davenport, who explains that he has been studying and noticing these changes within the ant population and requested help in funding a research centre in an abandoned town in the middle of the desert, where these effects are being noticed most. 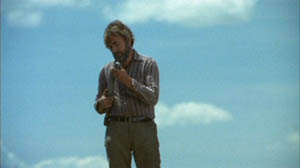 Hubbs is joined by Lesco and together work out of a laboratory in the form of a metallic bubble structure that has extensions attached to its main frame which serve the purpose of spraying a deadly insecticide to defend against any potential attack from the ants. 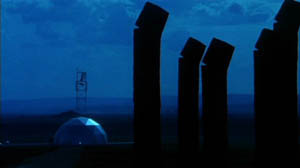 Lesco exemplifies the more-rational aspect of the two and as the film progresses, is more willing to concede defeat or a more constructive alternative in sharing space with the ant community than Hubbs. An early scene shows Lesco trying to work out a form of communication via sound waves to see if the ants will demonstrate some form of intelligent response. Hubbs, seeing this as a time consuming endeavor and lacking Lesco’s patience, ventures outside with a grenade launcher and starts to fire the weapon at the tall structures that have been erected by the Ants, structures which look strikingly similar to the standing statues that populate Easter Island: grouped together with the top of the monolith at an angle with a mouth-like opening which gives the impression that they are chanting to the heavens. Hubbs destroys most of them in the hope of provoking a reaction from the ant population. Lesco notices an excited chatter coming across his sound scopes and Hubbs realizes that the ants are reacting to his unprovoked attack. 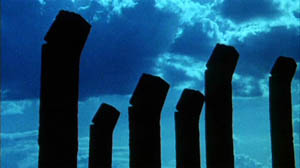 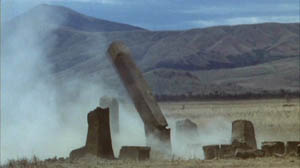 The scientists go to warn a family of the danger, telling them that they should evacuate their farm as soon as possible. The farmer, after refusing to leave because of his wife’s skepticism toward the threat, tries to protect his property by digging a trench and filling it with petrol to repel a potential ant attack. The couple, a farmhand, and their grand-daughter escape the farm after the ants lay siege to it, and find their way to Hubbs’ research lab. The lab is in the midst of being attacked by the ants as the family arrives, and Hubbs releases a yellow poison to stave off the present attack. 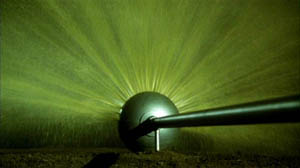 The grand-daughter (Kendra, played by Lynne Frederick) is discovered hiding by the two scientists and is brought into the safety of the lab enclosure. From this point on, a battle of wills develops with both sides trying to communicate with each other and outsmart his/her opponent.

There is a fascinating scene that shows the adaptability, resourcefulness, and innate collective spirit of the ants; a worker ant who has survived the ‘yellow’ attack grabs onto a sample of the crystallized poison and starts dragging it to the nest, where the queen is constantly pumping out tiny white eggs. The ant dies en route to deliver the poison, and another ant is there to take its place and drag the kernel further. Once it is placed in front of the queen, she eats it and starts pumping out yellow eggs; a new species is born that will be immune to that particular poison. 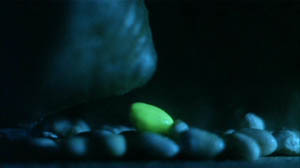 Director Saul Bass had worked for Alfred Hitchcock designing credit sequences for some of his best known films, and also won an academy award for a short documentary subject in 1968 entitled Why Man Creates. The images of the ants at work is astounding and are achieved using a macro lens that make the ants appear gigantic. The effect desired by Bass was to equate the human species and insects, thereby anthropomorphizing the ants and making them characters for whom the audience can empathize with. Bass contrasts both species, human and ant, in clever ways visually. For example, the shape of the metallic bubble laboratory complex resembles an ant hive; and the way Hubbs reacts to fellow human casualties as a necessary sacrifice seems to echo the ants’ devotion to the whole rather than the individual, meanwhile the ants seem to show more compassion for their dead than Hubbs demonstrates for humans. To illustrate this aspect, there is a scene of the ants gathering their dead soldier ants and dragging them to what appears to be an ant mausoleum, where the worker ants chant a form of sorrowful lament.

Phase IV falls in the Science-Fiction or disaster genre that was prevalent in the early 1970s, with such films as Who Can Kill a Child and It’s Alive. The film ends on an ambiguous note, a trait common to films of this kind in the seventies (i.e. THX 1138). In the final scene the identical framing and shot scale of the humans and ants in consecutive shots brings to a close the symbiotic links between human and ant made throughout the film. Is this the beginning of a new species? The film is wonderfully shot by Dick Bush, who had worked on early Hammer films such as The Kiss of the Vampire and Dracula A.D. 1972, and who would also go on to shoot some of the Star Wars films for George Lucas in the late seventies.

The DVD transfer presented here by Legend Films is next to flawless; a bit of digital artifacting is noticeable in the bright sunshine shots, but no boosting seems to have been done so that skin tones and the colors of the landscape are quite breathtaking. The DVD has no extras whatsoever, but is such a treasure to have in one’s collection that it is forgivable. Legend Films should be congratulated for rescuing and offering this title to the genre collector. Phase IV is a wonderful film and the DVD does it complete justice and should be considered one of the science-fiction genre’s most important releases of the year; a must-buy for sure. It has an enhanced 16:9 transfer with a 1:78 aspect ratio which serves the film well especially in the tight confines of the research lab. As with The Man Who Could Cheat Death, this DVD will be released to selected Best Buy stores in the USA, but if you dig around certain internet DVD stores, you may find a copy available. Be forewarned, as it is a highly anticipated release.

Go to the Legend Films website to see their expanding list of rare titles (some of which can be purchased from their site via paypal), and we will do our best to keep the DVD collector’s community informed of any important future releases they may be planning.