Old Age is a Ceremony of Losses: The Tranquil Thoughts of Donald Hall

The Poetry of Baseball

The American poet laureate Donald Hall died in June 2018 at the age of 89, leaving behind (as well as two children and many grandchildren) a staggering amount of varied writing, mainly poetry, but also children’s literature, biography, essays and memoirs. When I heard of his passing it was through a friend who send me a link to a short film made about Hall by Paul Szynol entitled Quiet Hours, which premiered on The Atlantic website. It is a calming, delicate, sad yet uplifting film about the frailty of old age; of how old age wears away the mind and the body but acts as a sort of preparedness for death. A time to take stock of things, material but also immaterial, like memories. This seems to be the tone Hall takes in his later poetry, his voice-over and life philosophy, evoked by Szynol through sensitive montage that alternates between shots of Hall in his house, being taken for shopping, or helped by his female caregivers (he notes the names of all four, as if to honor them) and still images of empty spaces in his house and surrounding landscape. His house is picturesque and quaint. The kind of home you would expect a poet to live in. The airy house we see Hall in, which he will die in some four months after the film’s release, is one he purchased from his grandparents in Wilmot, New Hampshire, and was built in the early 1800s. 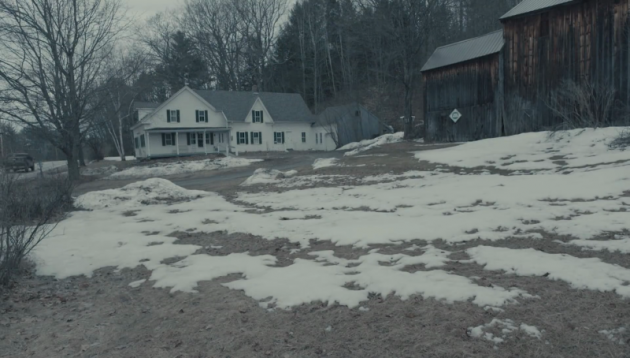 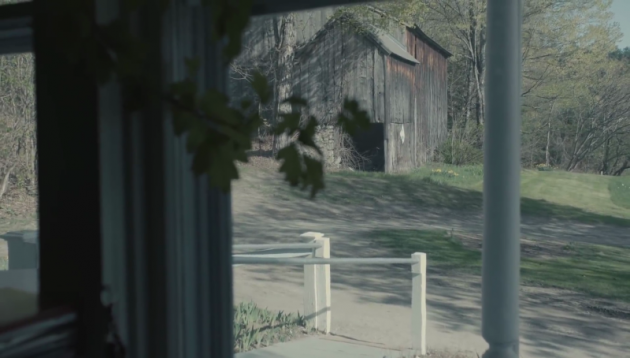 The film is blessed by Hall’s poetic voice-over (he never speaks on camera) which has the ability to echo his art as a study in the passing of time. For example, he describes his barn across from his home which he sits and looks at from his kitchen window: “Over 80 years it has changed from a working barn to a barn for looking at.” Hall reads aloud one of his poems about the change of the seasons, while the camera films the changing scenery, snow, rustic leaves, bare branches. The saddest reality of the film is Hall’s still lingering grief over the early death of his wife (and poet in her own right) Jane Kenyon. He tells us of how they met, she his student, and when they started to date talked about marriage, but expressed concern over the 19 year gulf between them, with Hall saying he did not want her to become a long-time widow. They married in 1972 and lived happily until her death (from leukemia) in 1995. The older Hall would outlive her for 24 years. They were right about the long widowhood, only wrong about who would be the lonely soul. He claims that not one day has gone by in the ensuing 22 years since Jane Kenyon’s death that he has not thought of her. He tenderly recalls the many days he spent next to her on her deathbed, and how “miserable” it was for her to die so young. And the pain is visible in his face, especially when Szynol cuts from photos of Jane in her youthful prime to a close-up of Hall in a pensive state. His home is adorned with shelves of books and records but mainly remnants of Jane Kenyon, embroideries, photos, signed poems. All the time he has lived alone he describes as going from moments of loneliness (bad) to moments of solitude (good). 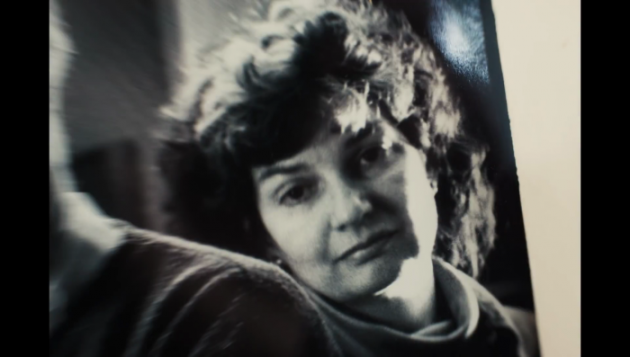 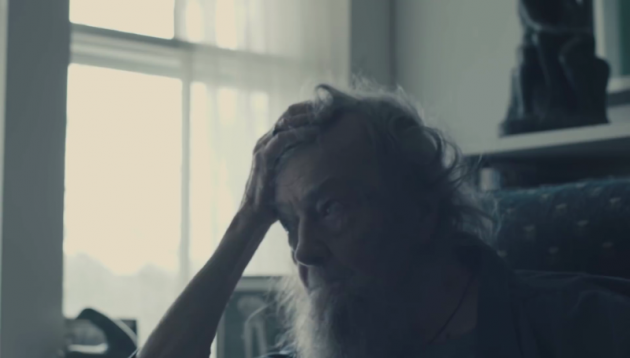 When I heard of the death of Donald Hall the name was familiar to me, but less for his poetry and more from his appearance as an interviewee in Ken Burns’ multi-part documentary Baseball, and for his authoring of the autobiography of the Pittsburgh Pirate baseball player of the 1960s and 1970s, Dock Ellis. Ellis, 17 years Hall’s junior, died in 2008 at the age of 63 of liver failure. Hall loved baseball and was one of many writers who depicted baseball as the most literate and poetic of sports, a sport marked by moments of space in between action that reflect the huge space of its playing field. Like baseball, poetry is an art of spaces, between words, lines, and stanzas. Baseball is a slow game, where moments of inaction and waiting outweigh moments of action. It is a game to be absorbed slowly, over time, like good poetry (and well, good anything). I couldn’t help but notice in one static shot of Hall’s living room the thick book of statistics on a book shelf, Total Baseball, which can be found on one of my book shelves as well. 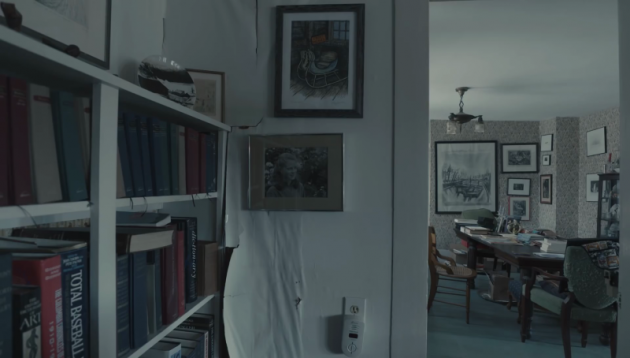 Note Total Baseball at the far left on the shelf

Dock Ellis was a fascinating character, the subject of a documentary in 2014, No, No: A Documentary, (dir. Jeffrey Radice) which shed light on Ellis’ long struggle with substance abuse and his strong views on racism and advocacy on behalf of African-American ball players. Hall concentrates on baseball but captures the rough and tough nature of Ellis, his ‘abrasive’ personality and the attitude which made him in the eyes of others a militant, a black man who stood up for his rights, took guff from no one and belied the squeaky clean image of baseball fostered (often under the burden of great irony!) by Major League Baseball. In the Hall authored book Ellis recounts to Hall that not one day passed during his career as a baseball player that he was not on some type of drug or substance (recalling Hall’s own admission that not one day passed that he did not think of his late wife). Famously, when Dock Ellis pitched his no-hitter in 1970 he told Hall that he was drunk from vodka when he pitched that no-hitter. This revelation appeared in the first edition of the book, in 1976 (a hardback which I still own to this day) but in the 1989 edition Hall changed it to the truth, which is that Ellis was high on LSD the day he pitched that famed no-hitter (a fact that boggles the mind, really). Ellis did eventually clean up his act and spend his post-baseball life counselling drug users and working with minor league players. 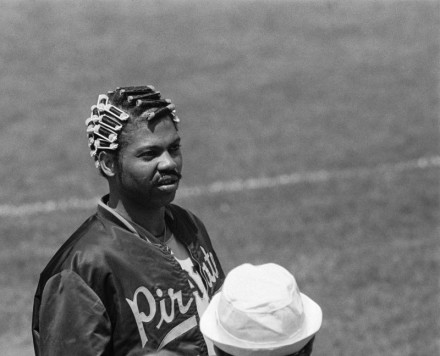 With the higher profile of race today in the political and entertainment sphere, specifically the politicization of sports, underscored by the controversy of the black football players who knelt during the national anthem as protest against racial injustice and police brutality, and the increased profile and symbolic power of the Black Lives Matter movement, the role of Ellis and the events that marked his life are fascinating to remember. Ellis played and was one of the on and off-field leaders of one of the most progressive baseball teams of its time, where inclusion of race was concerned, the Pittsburgh Pirates. During the Civil Rights era the Pirates were the most integrated team on the baseball pitch, routinely featuring five, five or six black (and/or Latino) players on the pitch. Some of their black players were also vocal, spoke their mind and were natural leaders. Players like Ellis, Willie Stargell, Dave Parker, and Roberto Clemente. Largely by chance (two regular white starters, Richie Hebner and Gene Alley, were both injured), on September 1st, 1971 the Pirates fielded for the first time (and only?) ever in a major league baseball game, an all-black baseball team. For the curious, the players were Rennie Stennett (second base), Gene Clines (center field), Roberto Clemente (right field), Willie Stargell (left field), Manny Sanguillen (catcher), Al Oliver (first base), Jackie Hernandez (shortstop) and Dock Ellis (pitcher). The great Pirate team of the late 1970s, which would rise to the top of the baseball summit by defeating the Baltimore Orioles in the 1979 World Series, were a barnstorming team that played big and loud, led by charismatic black and Latino players (Ellis, Stargell, Parker, Manny Sanguillen, Stennett, John Milner, Oscar Moreno) and adopted for their theme song, “We Are Family” by the all black, all female pop and soul band, “Sister Sledge”. 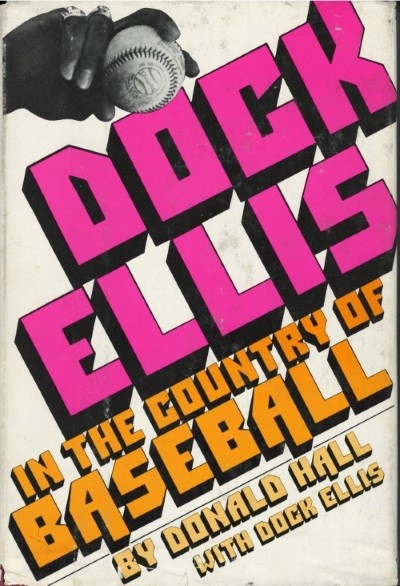 In his book on Ellis Hall refers to baseball as a “country” (“Baseball is a country all to itself,” p. 9.). The implication is that baseball is a reflection of America, with people passing through the country of baseball, playing, having success, failure, and then retiring to other pastures. “The country of baseball is polygot” (p. 10). The parting words of Hall’s book Dock Ellis in the Country of Baseball strikingly echoes the tone and mood of Szynol’s film on Donald Hall, Quiet Hours, a coincidence which would no doubt have pleased Hall: “Retired citizens keep rows of different uniforms in their closets. As a ballplayer ages, each move to another team, each spring in the Florida sun again, he moves a little closer to the time when he will retire from the noon of games to the evening porches of memory. And in the meantime, the game becomes more intense and more cherished, each season, as the noon declines” (p. 254)

The film Quiet Hours can be viewed here: