On June 28th, 2007 the Double Negative Collective invited filmmaker and writer Nicky Hamlyn to present a screening of his recent film work at Cinema Parallel (Ex-Centris). Hamlyn’s films, mostly silent and shot using a Bolex 16mm film camera, focus on the relationship between camera and place. All films incorporate various in-camera techniques such as lap dissolves, exposure variables, focus shifts, single frame sequences and time-lapse photography that alter and expand our perception of common objects such as a garden trellis, a bathroom faucet, a water hose, and shadows. The 16mm prints in the program were organized by completion date. 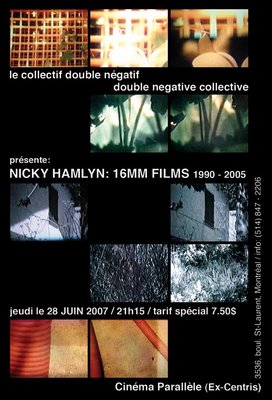 The first two films Minutiae (1990) and Hole (1992) started the evening of experimental shorts. In Minutiae, a site/event-specific film for the BBC2 TV program The Late Show, Hamlyn captures the loneliness and emptiness of a television studio and an interviewer’s chair. We are introduced to Hamlyn’s structural approach to filmmaking, using in-camera editing techniques including the use of macro-photography and lap dissolves. The film is textured with the grainy images bathed in dark hues of reds and blues. In his next film Hole (1992) the subject matter is a man made hole near a construction site. Employing static camera shots and conventional compositions, the film is an exploration of light, but also of scale as the filmmaker contrasts the human and feline appearances that pass through the hole.

Hamlyn’s visual style intensifies with his next film White Light (1996). The principle subject of White Light is a set of chrome-plated bath faucets. Made frame by frame with images shifting in and out of focus, the film captures the shimmering light flickering off the chrome creating an effect that is visually free flowing and rhythmically musical. As a result, the chrome faucets took on the form of shiny bubbles. The film also incorporates rotoscoped sequences that are derived from the filmed footage and serve as animated interludes positioned between the live action (mechanical images) and the drawn animation (hand drawn images). In Lux et Umbra (1999) Hamlyn returns to site-specific film. Shot in Hoxton Square, the site of the now defunct Lux Centre, the film was originally shown as a back projection on the windows on the Centre’s first floor gallery. Hamlyn defines the architectural space and scale through cubist fragmentation and geometric shape relations, emphasizing the three dimensional grid patterns of the building through frame by frame sequences that are either in motion or simply static.

The next film Matrix (1999) continues Hamlyn’s study of spatial elaborations and dimensional planes. The film is constructed in terms of receding planes through a series of object studies in which Hamlyn shoots a garden trellis, a spider web and a section of branches from a tree. Emphasizing the spatial depth of the image, Hamlyn jogs the focus back and forth to specific calculated distances. This technique is developed by the fragmentation of objects such as the garden trellis. Cropping it in extreme close up to section off the screen space, Hamlyn alters the depth perception as the trellis is thrown in and out of focus revealing the background in fleeting moments of clarity. Matrix is also fascinating because of its editing structure, where the silent images are lively and musical via rhythmic in-camera cuts, pulsating as a series of constantly changing images. Not Resting (1999) is more restrained in its technique, as it was shot from a single position, the filmmaker’s bed, in a single session. The film is structured around a number of formal ideas such as shot duration, movements between light and dark, static camera and static subject, and muted colors.

The last four films from the program, Pristino (2003) Penumbra (2003), Object Studies (2005) and Panni (2005), are works from Nicky’s residency in Italy. The first from the Italian series, Pristino is composed of uniformed time-lapse sequences shot in northwest Umbria, Central Italy. Condensing days into seconds, Hamlyn makes use of lap dissolves and time-lapse photography to compress the temporal duration of the Italian landscape. The film invokes some pre-cinematic technologies mainly in the shadow plays where light and shadow manifest as the movement of trees, clouds, and other objects cast by the sun project and dance onto white walls and other surfaces, emulating and interacting with the film’s grain. In Penumbra, Hamlyn’s subject matter is his bathroom tiles. The film is subtle in its evolving image of the ever-changing grid lines from the white tiles. The film references the cinematic medium to the extent that the audience is aware of the material. The formal structure of the film parallels the structure of the filmstrip referencing the physical form of the film frame and its temporal movement. We are forced to see beyond the film grain to find the grid and remind ourselves of the structural limitations of film. Towards the finale, the geometric grid of the bathroom tiles change from a two dimensional plane to a three dimensional grid structure as Hamlyn creates a superimposition where one layer of bathroom tiles zooms in as another layer zooms out, colliding with each other.

In Object Studies (2005), Hamlyn incorporates various visual techniques such as time-lapse, single frame sequences and lap dissolves to explore density and translucency and the interactions of different kinds of shadows. Shot in the same location as Pristino, Hamlyn films various objects such as an orange hose against a white wall to macroscopic views of flower petals. There are many remarkable sequences in this film that employ the trickery of various cinematic techniques but there is one that exceptionally stands out. Hamlyn films the corner angle of a house where light and shadow are on opposite sides. The filmmaker makes use of the direction of light as it passes from one side of the house to the other via time-lapse photography. As light becomes shadow and shadow becomes light a flicker effect is born creating a positive negative reaction of black and white. Another interesting element with the film is its use of color. According to the program notes, Hamlyn organized the material around a color scheme based loosely on the hues of the color temperature scale: brown, red orange, yellow, green, blue and white. 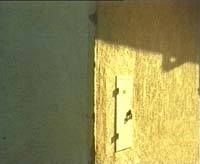 The last film in the program Panni (2003) is a visually arresting work in its formal structure and visual expression of colors. The subject matter of the film is a row of bed sheets flapping on a clothesline, drying in the wind. The colors punch through the screen as orange sheets flutter against a green backdrop of grass and trees. Hamlyn employs interesting in-camera editing techniques to create rhythmic punctuations and strategic editing patterns that play on movement and subject-to-camera positioning. This intensity picks up as the frame-by-frame technique creates a translucent, ghost-like image of the hanging bed sheets flickering in and out of physical presence. We begin to look beyond the foreground where the sheets hang on the wash line to the background and into the lush green garden. A fitting end to a refreshing screening of experimental short films.

Born and raised in the flatlands of Saskatchewan, Mike Rollo currently lives in Montreal working as a filmmaker and educator. A member of the Double Negative Collective since 2004, his films have screened internationally. Mike recently completed a cinematic formalist poem of Saskatchewan entitled Ghost and Gravel Roads.