Homespun Horror: The Legend of the Honey Island Swamp Monster

Fans of the curio, the mythic, the legendary, the folkloric, and maybe even the truth, will be intrigued by the recent, DIY (do it yourself) documentary entitled The Legend of the Honey Island Swamp Monster, an earnest film about a series of sightings of the titular creature in the New Orleans, Louisiana area since 1963. Many regions of the world have their own ‘legendary creature’ that has been spotted by local residents, hunted down by curious tourists, and eventually settled into dustbin of local folklore. There’s the famous Yeti, or Abominable Snowman of the Himalaya region of Nepal and Tibet, the Sasquatch (‘Bigfoot’) figure of North American folklore, The Fouke Monster of Fouke, Arkansas (which was made into a docu-drama in 1972, The Legend of Boggy Creek), the beast of Lake Pohenegamook (in the province of Quebec), recently mythologized in the poetic documentary by Nicolas Renaud, La Bête du Lac, 2007, and perhaps the most famous of them all, the Loch Ness Monster of Scotland’s Loch Ness. There are dozens more, from every culture and many Nations. The type of creature cited in the Honey Island Swamp area, however, is, according to Joe Nickel,

…part of a genre of mythic swamp-dwelling “beastmen” or “manimals.” They include the smelly Skunk Ape and the hybrid Gatorman of the Florida Everglades and other southern swamps; the Scape Ore Swamp Lizardman of South Carolina; Momo, the Missouri Monster; and, among others, the Fouke Monster, which peeked in the window of a home in Fouke, Arkansas.

The study of these creatures (along with extinct animals) even has a field, called cryptozoology (the study of ‘hidden animals’), and one such ‘expert’ appears in this film, Lloyd Pye (who spends as much time plugging his website as explaining the Swamp Monster!). In many cases the authenticity of these creatures can and never will be proven or dispelled. Believers believe and doubters doubt. In a sense whether the creature exists or not is not even the point. The point of these tales is in the need to believe in them, to believe in something just beyond the limits of credulity and rational logic. Something which unites a community and gives them a unique tag. 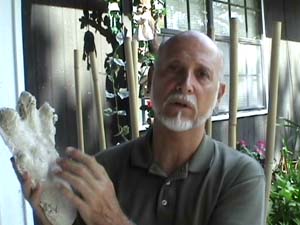 The film is directed by Dana Holyfield, the granddaughter of the man who first sighted the Honey Island swamp monster back in 1963, Harlan E. Ford, an air traffic controller, accompanied by friend Billy Mills (Ford only made his finding public in 1974). Holyfield died in 1980 but his friend Mills is still alive, and is interviewed in the film. The film is engrossing enough if you get by the usual drawbacks associated with low-budget, DIY productions. The most distracting aspect here is the underexposed night time footage, where the camera’s insufficient single flood light casts all but the character’s faces in grainy darkness (and there is also the dreaded ‘red eye’ to content with). Luckily the night-time scenes are few, and mainly restricted to a few live witness accounts in the beginning of the film. The film also errs in its decision to include dramatizations of the creature (thankfully these are also few) –an obvious man in a suit– and offscreen growls that are meant as an aural equivalent to the staged shots of the creature (granting that the creature growls are sometimes used as a form of comic relief). These few night-time scenes are in stark contrast to the more effective day-time interviews, including one of the film’s highlights: an extended scene, shot in a single long take, of a man named Evan calmly rowing his raft deep into a remote bayou of Peach Lake, while slowly recounting his first encounter with the creature (an ominous, constant drone adds to the scene’s quiet suspense). 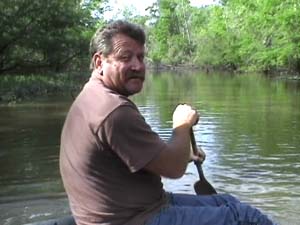 What I found most revealing about the film is how –irregardless of the subject– strongly tied these communities are to the tradition of oral culture. Knowledge, whether factual or anecdotal, is disseminated by word of mouth. Although we see snippets of newspaper headlines, technological means of communication take a back seat to the age old oral tradition. Stories of how and where the creature was seen, its behaviour, its nature, the specifics of descriptive detail, are handed down verbally through generations of grandfathers, fathers, and sons/daughters. This ‘art of storytelling’ forms an important part of these small community’s social interaction, and functions as a form of entertainment (like the age old scary campfire stories). From a spectatorial viewpoint, part of the film’s pleasure is in simply listening to the flavorful voices and drawls of these people living along the New Orleans, Louisiana area. 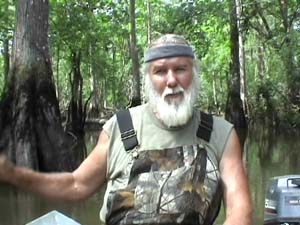 The attitude of the eye witness accounts to the legend is also varied enough to render a more realistic, balanced perspective on the myth. Witnesses have their own theories as to who/what the creature is, and how it came into the region. Some seem appreciative of the attention the creature has thrown their way, while others would rather promote the view that it is a hoax to discourage potential visitors to the area; or as a cautionary tale to keep children from going into remote areas. [2] One of the prized examples of physical evidence shown in the film are many three-toed footprints found in and around the area. Ford was the first (of many) to take a plaster cast of the Hominoid’s footprint (you can actually order a copy of the plaster cast on Holyfield’s website!). Holyfield describes the plaster casts as being “a cross between a primate and a large alligator.” Doubt over the validity of these plaster casts was first cast by filmmakers Jay Michaels and M.K. David in their docu-short of 2003, which sees them revisiting the site of Ford’s sighting of the Honey Island monster. (The 13 minutes video can be viewed for free here.) They make a claim to new evidence which had never left the confines of the small community: the discovery of a shoe which has a resin-like cast attached to its bottom which may have been used to make the so called monster tracks. The shoe was in the possession of a local, and they later learned from Dana Holyfield that the shoe may have been the property of her grandfather, Harlan E. Ford. Michaels and David make the claim –dubious given the many existing plaster casts– that the shoe matches all known plaster casts of the monster tracks. In Holyfield’s more recent documentary, the ‘monster’ shoe evidence (referred to as The Hoax Theory) is explained as a prop used by locals to discredit the myth so as to discourage tourists from visiting the swamp, which is a good hunting territory. The contradictory nature of evidence surrounding the plaster casts and the rigged shoe, regarding size, form and origin, make it impossible to arrive at any satisfactory conclusion. Clearly, the presence of the rigged shoe proves that at least some of these plaster casts and sighted footprints are a hoax; but it does not necessarily prove that they were the source of Harlan E. Ford’s evidence. 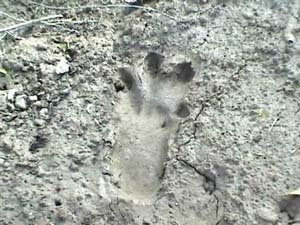 The film ends with a Blair Witch Project twist (or should that be Cannibal Holocaust), with Ford’s widow Yvonne Ford showing us an old super 8mm film reel (she mistakenly refers to it as a ‘tape’) she found in amongst her husband’s other audio tapes and film, with the label “Honey Island Monster” on it. Apparently n his later years Harlan E. Ford swapped his hunting rifle for a super 8 camera, preferring to ‘shoot’ the wildlife in a decidedly more humane manner. The film ends with the spooling of this super 8 film, which (of course) includes a brief snippet of a tall, hairy creature cutting through the woods in the background of the shot. We don’t get a clear view of the creature, but it seems to concur with eye-witness accounts of it being seven feet tall, covered with grayish hair, and having large amber-colored eyes (although the size of some of the footprints/plastercasts would suggest it is not that tall). Although the footage does not destroy the power of our imagination –the creature is only partially glimpsed in long shot walking behind thick foliage and trees– the footage feels authentic, maybe a tad suspicious, although dramatically effective. The DVD, which can be ordered directly from Holyfield’s website, includes a digital frame by frame blow-up of Harlan E. Ford’s super 8 footage which attempts to render a closer look at the creature. 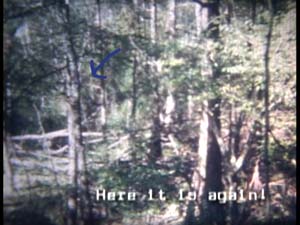 “We may be especially interested in man-beasts, given what psychologist Robert A. Baker (1995) observes is our strong tendency to endow things with human characteristics. Hence, angels are basically our better selves with wings; extraterrestrials are humanoids from futuristic worlds; and Bigfoot and his ilk seem linked to our evolutionary past” (Joe Nickel).