From “Eh?” to Zedd: R.I.P. founder of The Cinema of Transgression

NYC Cinema of Transgression founder Nick Zedd passed away February 27, 2022. I’ve written about his work over the decades, even performing on the same bill as him at the Montreal Shock Art Festival in 1988. His films unfortunately got seized at customs so he regaled us with a spoken word performance instead, which included texts that would later find their way into his 1997 memoir Totem of the Depraved (published by 2.13.61). I attempted to review this book for New York Press upon its release but the project fell through, reasons of which are detailed below. This, & other failed attempts to screen his controversial films in “Canaduh,” as he liked to call us, gave him ample fuel to bash our side of the border every opportunity he could, while furthering his notoriety in the process. When I tried to organize an underground film festival with the Cinémathèque Québécoise to no avail shortly thereafter, I sent Zedd my rough draft of the book review along with an invitation for him to participate, & much to my delight, he skewered it. Serves me right for sharing unfinished work. This draft & his response can be seen unabridged in their original formats below, including an interaction with author Darius James who originally presented me with the task, & whom Zedd also refers to negatively. In retrospect, I should’ve pegged Zedd’s peccadilloes as potentially “normal” instead of “ordinary” in my conclusion because the notion of being perceived as ordinary really raised his ire. I responded to his accusations of being “an ageist Robert Crumb” by informing him that I was practically the same age as Zedd (in case he assumed I was a snide young whippersnapper) but alas, that snail-mail letter is long gone. I also told him I got the last laugh because his handwritten letter to me included a free autograph. I begin this article with the remnants of yet another attempt to have his work screened in Montreal, this time in 2008, whereupon I interviewed him for the now defunct Montreal Mirror to promote the event, since it provides a handy introduction to his work. This time he couldn’t even get himself across the border & the show had to be cancelled at the last minute. I had nothing to do with its organization but the feuding back & forth that I witnessed between Zedd & its organizers, which included even more undeserved “Canaduh” bashing, especially virulent this time around, turned me off of further interactions with the man & I decided to admire him more from afar from then on. Until his last dying day, I always wished millions could’ve been magically plopped into his lap in order for him to foist even bigger & better “cinematrocities” into our faces.

2: Transcript of Rick Trembles interview with Nick Zedd from the March 13 – March 19, 2008 issue of The Montreal Mirror:

The last time Nick Zedd tried to screen Whoregasm in Montreal his copy was seized by Canada Customs & eventually returned with a letter calling it “morally bankrupt.” He’s been making underground films since the 1970’s starring the likes of proto-punk Richard Hell & no wave diva Lydia Lunch. In the 1980’s he established the “Cinema of Transgression” to break free from the “academic snobbery” prevalent in experimental film at the time. Zedd currently directs the cable access TV series “Electra Elf” out of Brooklyn. Tonight Cinema Abattoir presents the Montreal premiere of Angélique Bosio’s new documentary on Zedd & Co. “Llik Your Idols” with Zedd in attendance presenting his 16MM classics (Whoregasm included). Friday he’ll be screening his recent teleplays preceded by a collection of locally made underground shorts.

Nick Zedd: I’ve reinvented myself by producing G-rated fetish farces disguised as action/adventure. No more Super-8 or 16mm. Now it’s Mini-DV & editing on a computer. I can do special effects & CGI where before it would have cost thousands. Still use miniatures, puppetry, & cheap costumes with better results than Hollywood. Still DIY with unpaid actors. Same themes; targets I satirize from the same compost heap. I’m probably reaching more people now with the internet & public access television. The amateur approach is the best way to break new ground; it all gets lost when professionalism takes over.

RT: What would you consider subversive to the average viewer these days when so much mainstream material is geared to shock now, albeit on a more superficial level?

NZ: My recent “No Plague Like Home” examines the 9/11 false flag operation & identifies the perpetrators within the shadow government i.e.; David Rockefeller, the Rothschilds, the drunken mole Cheney, the traitor Bush & other members of the global elite, although in a light-hearted way, naturally. The dominant myth of our age, the 9/11 Lie is the false foundation propping up the last 8 years of economic collapse, unrestrained military imperialism & global dominance unleashed on the world. It is imperative to dismantle this myth in every forum available in order to reverse the suicidal course of the US Empire whose sovereignty is targeted for annihilation by the masters of the Illuminati who now pull the strings of our puppet leaders. America is a nation of sheep led by a handful of pigs.

RT: Is hitting a nerve nowadays more a matter of the context of the presentation than the content?

NZ: Both. Honest content’s buried or ridiculed by our corporate media which is thinly veiled imperialist propaganda. Content can be integrated from insurgent sources into the media through pranks, actions & comedy programs which are the best source of information now that we’re living in a sad, sorry, fucked up simulation.

RT: Where do you think new breeding grounds for communities of counterculture & dissent could best emanate from?

RT: You’ve said that typical current tinseltown escapist fare resembles “elaborate propaganda sucking in audiences starved for a substitute reality to the mundane nightmare of capitalism.” Your recent teleplays employ special effects & elaborate costumes in humorous ways, basically creating your own alternate universe. How do you differentiate that from escapism?

NZ: It’s disguised as escapism but core truths are revealed in the subtexts readily apparent to anyone who’s paying attention.

NZ: Of course. How else could 19 fanatics with boxcutters led by a guy in a cave on a dialysis machine breach the most heavily guarded airspace on earth & not be intercepted before hitting two skyscrapers which then magically collapse at free fall speed in a controlled demolition secretly installed by Marvin Bush’s company Securacom in collusion with real estate tycoon Larry Silverstein, hoping to make a quick buck on his white elephant while helping the PNAC crazies jump-start a convenient war of aggression in the Middle East in order to gouge oil prices & augment massive profits for the multinational conglomerates controlling everything?

RT: If you were awarded a substantial budget for your next film how would you spend it?

NZ: On building a movie theatre to show it in.

NZ: Obama, even though neither of them is saying what needs to be said. Elections in America are a gigantic mass deception.

4. Image scans of unpublished review draft of Nick Zedd book Totem of the Depraved by Rick Trembles (including some preliminary illustrations that were meant to accompany the text). 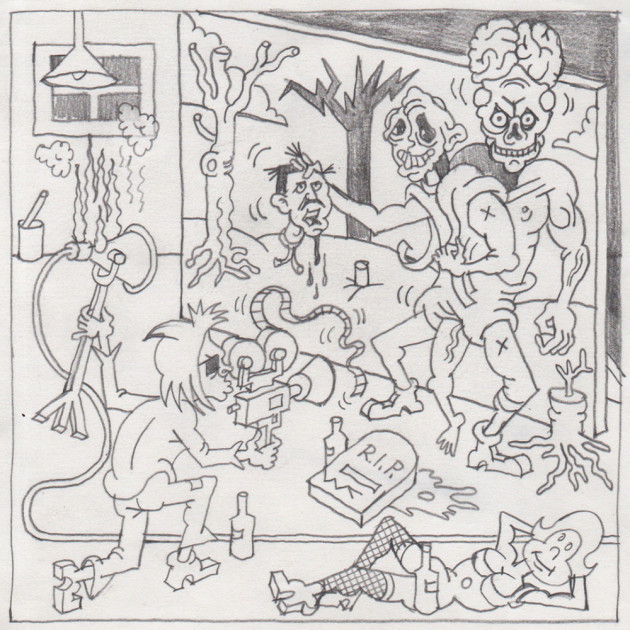 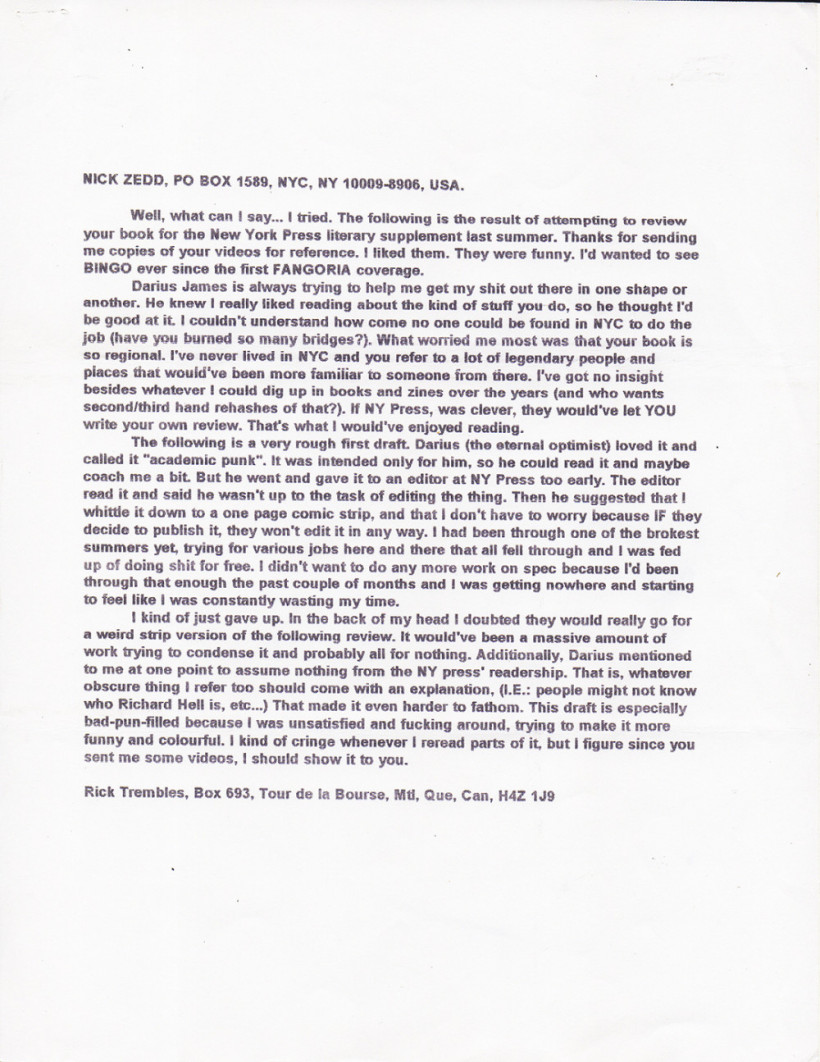 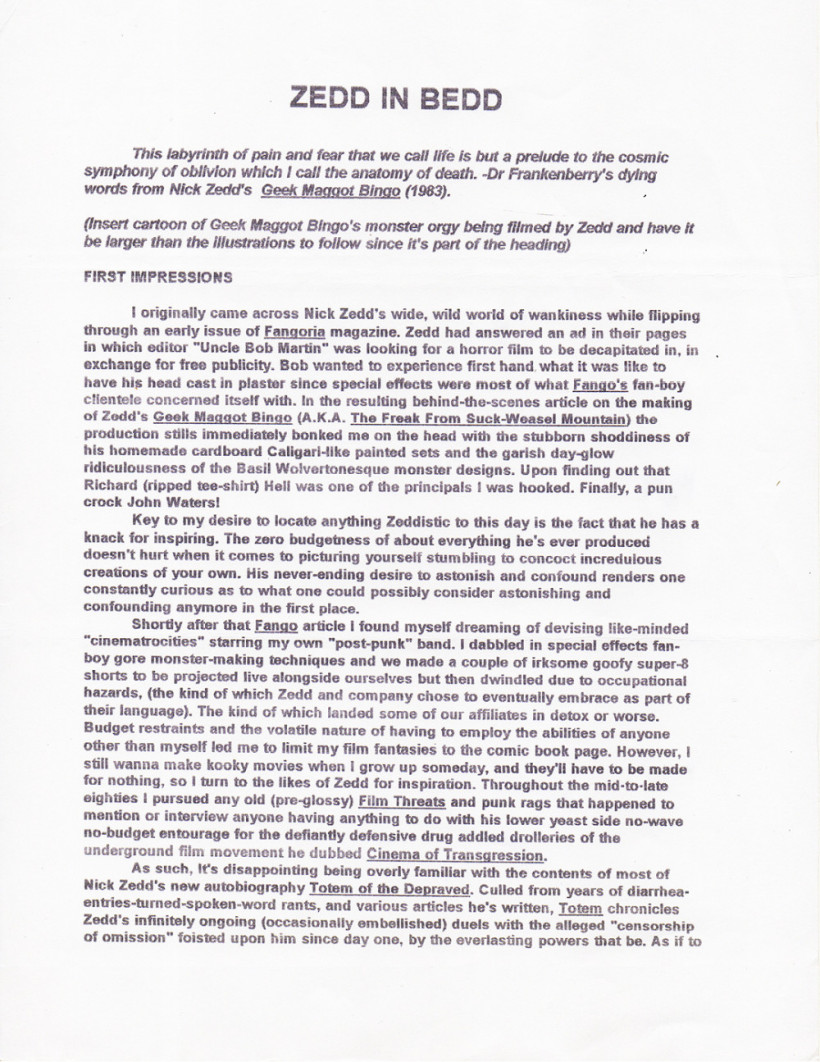 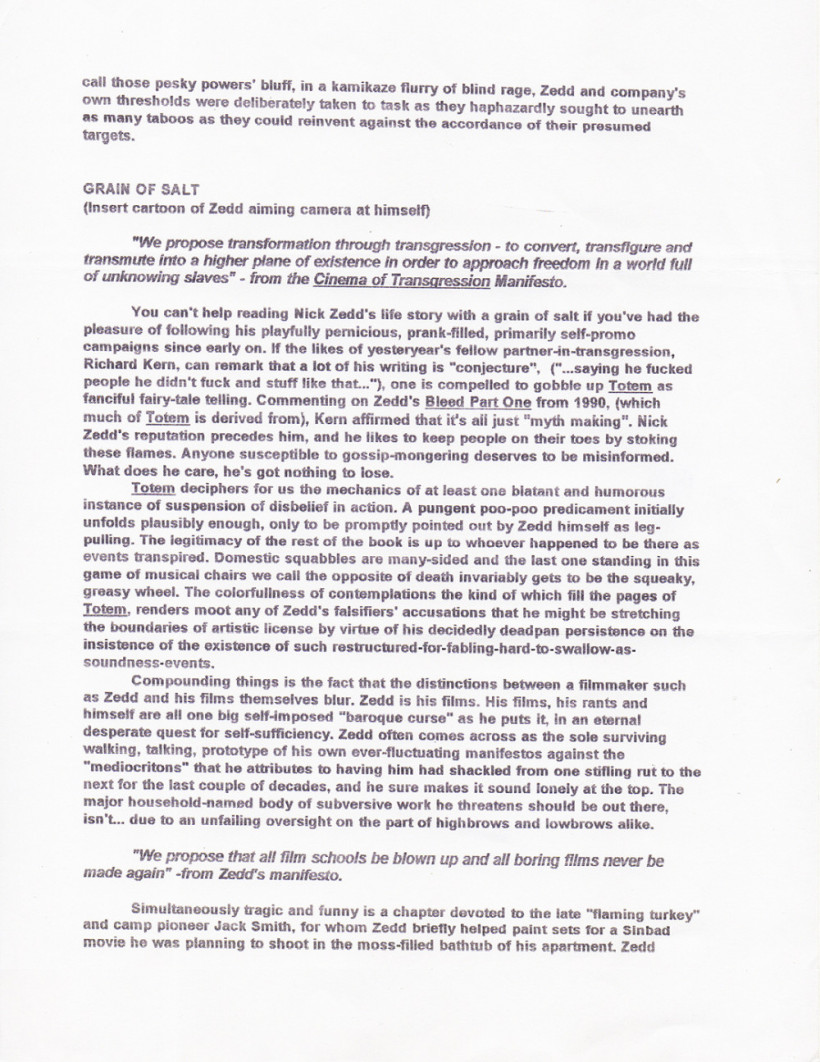 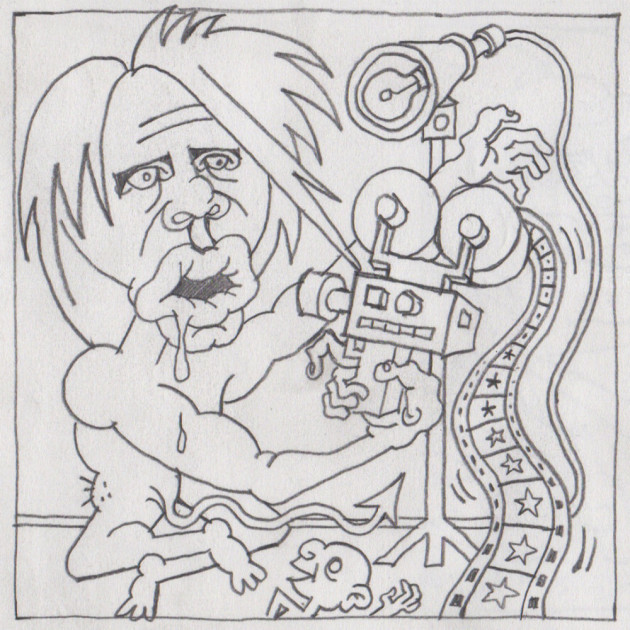 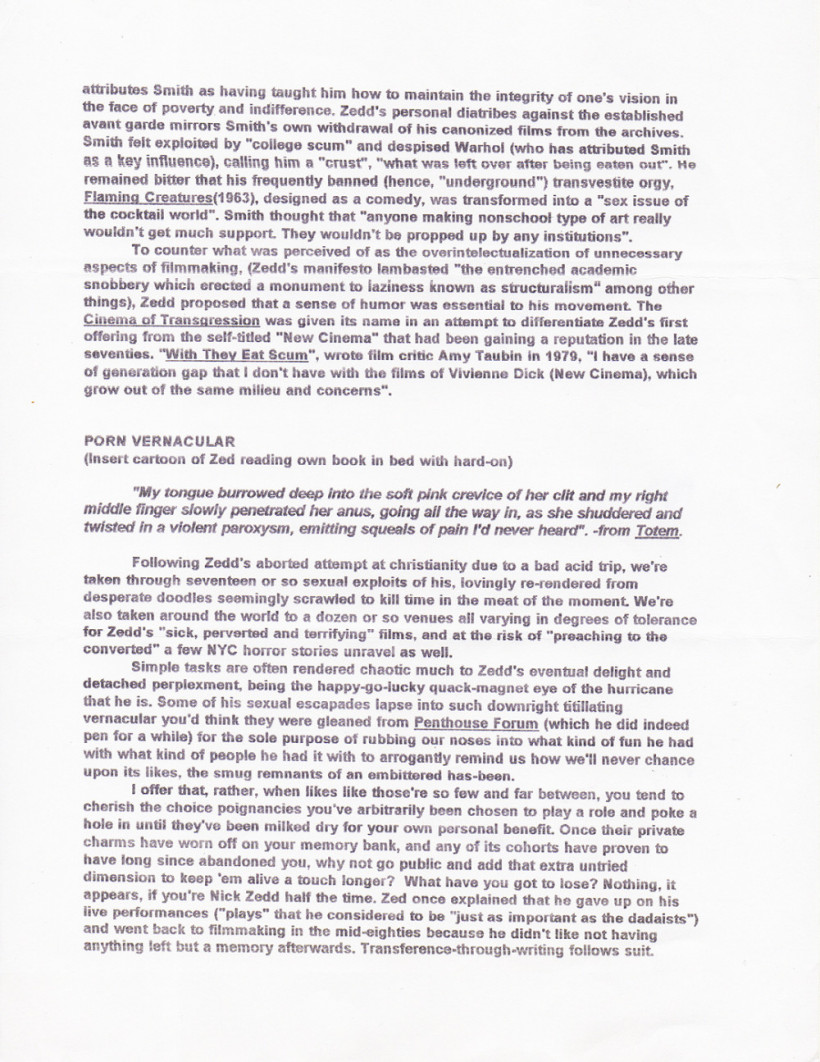 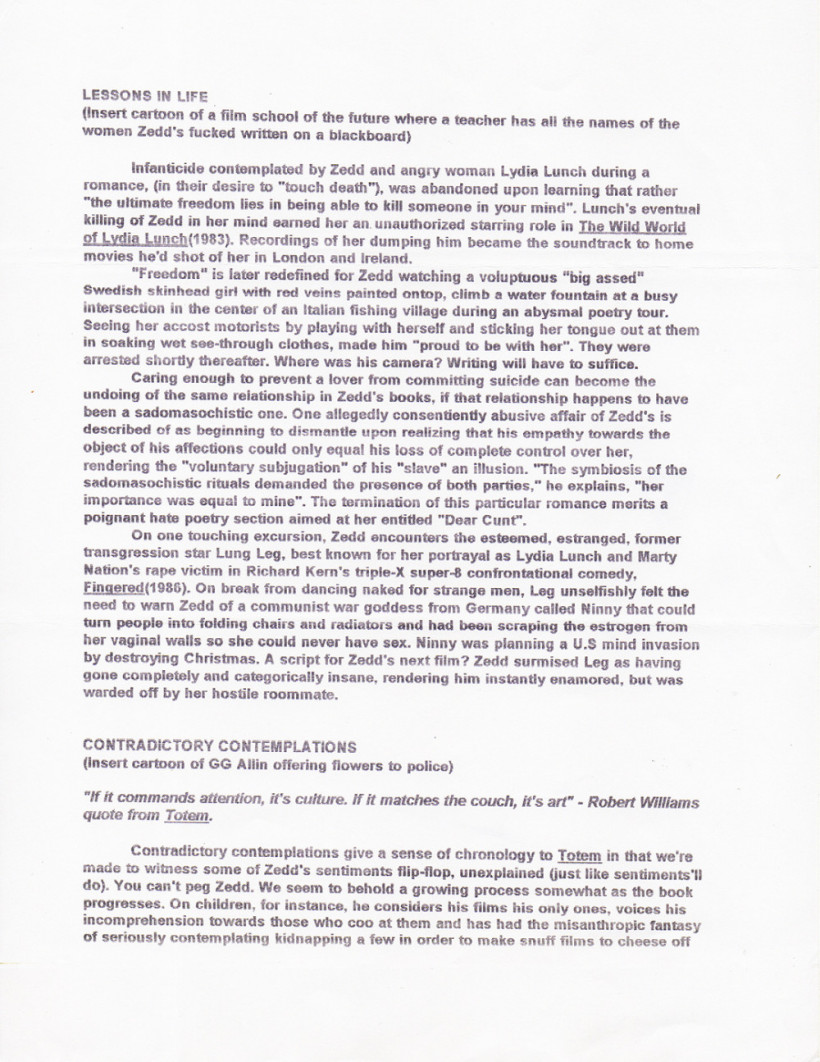 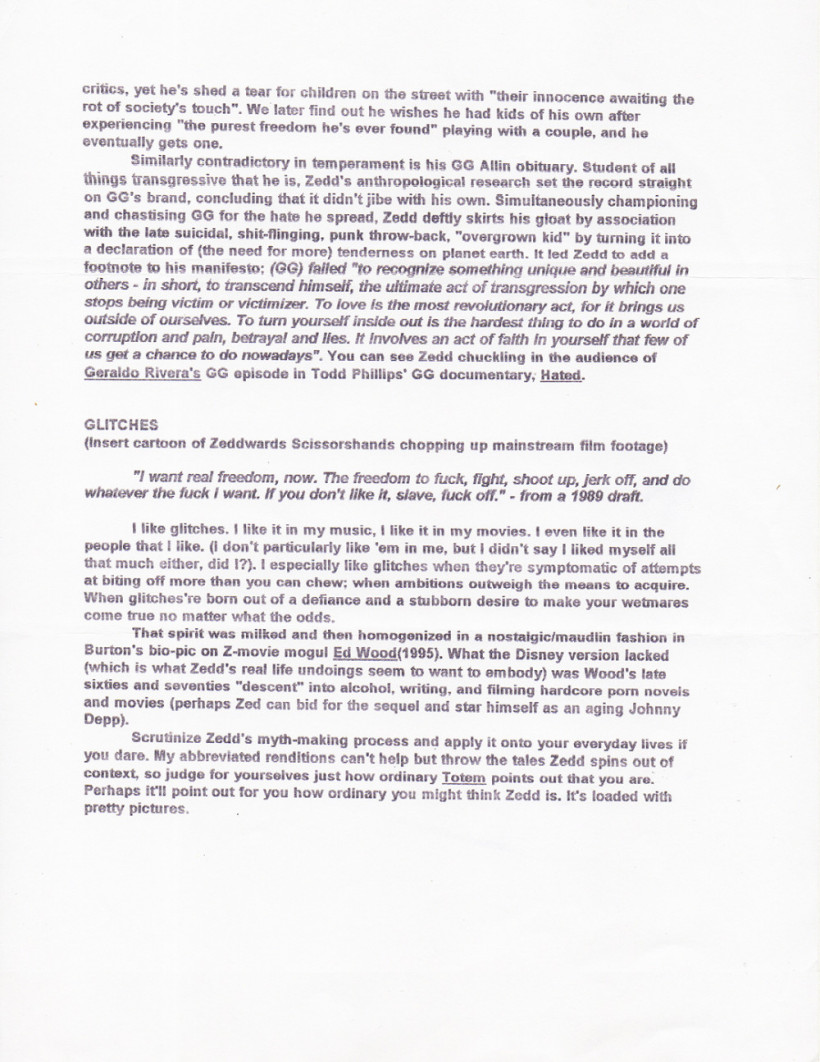 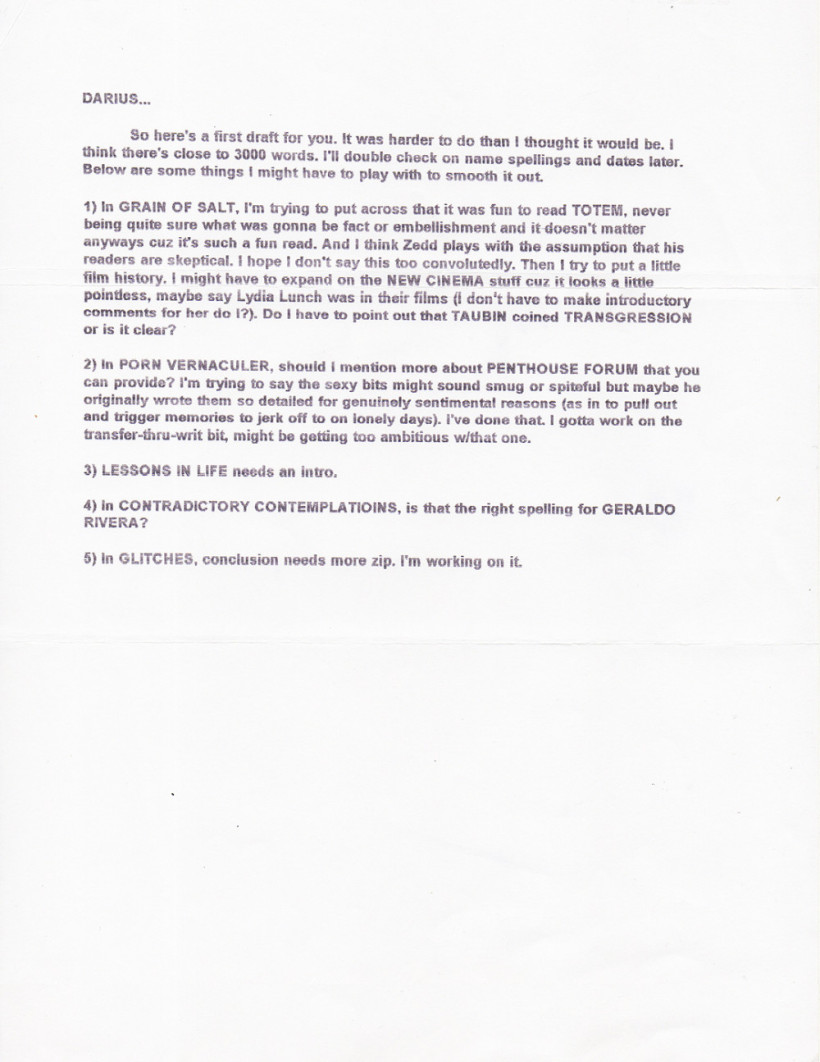 What can I say? If that’s called trying, I’m glad you failed.

Odd that as an afterthought, you clue Darius to the fact that “it was fun to read Totem” since you never said that anywhere. Convoluted is right.

Strange that you tell me that you liked my videos, yet in the review you affect a pose of drippy condescension. Why the act?

James never tried to find anyone in N.Y. to review the book. Give me a break. He was too lazy to write it himself so he picked you.

Unfortunately, what you wrote is garbage, which is why you were chosen.

James didn’t have the guts to do his own hatchet job.

He ended up doing nothing while making sure crap like William F. Buckley’s book on Catholicism and other rubbish got reviewed.

I am not “ordinary.” Only a fool would make this assertion.

My movies are not “self-promo campaigns.” I never claimed to have sex with people I didn’t fuck.

By his own admission, Kern lied by flaking out on a group show I organized when he said that.

I openly identified the one story I fabricated in the book and that act of honesty renders me suspect only to a hopeless cynic.

I can see why you cringed. Your puns were a way of hedging your bets in lieu of an honest opinion. Is that a Canadian P.O.V.?

Personally, I’m tired of people who judge me as representative of a mythical New York they are obliged to hate and envy. Why does it matter where someone is from?

An aging Johnny Depp? From an ageist Robert Crumb? In short, I hated your “review.” I’m glad it wasn’t published.

Of course, I am still interested coming to Canaduh to blow them away, as long as I get paid. I urge you to pursue this dream, since I’d be honoured to follow (Jack) Smith and (George) Kuchar for a three night run.

The idea has historical significance since the Canadian authorities have so successfully suppressed screenings for the last fifteen years.

The curatorial cowardice manifested by your countrymen has been abysmal. That’s the proper legacy to demolish.

To end the ban could be subversive, which is the whole point, isn’t it? 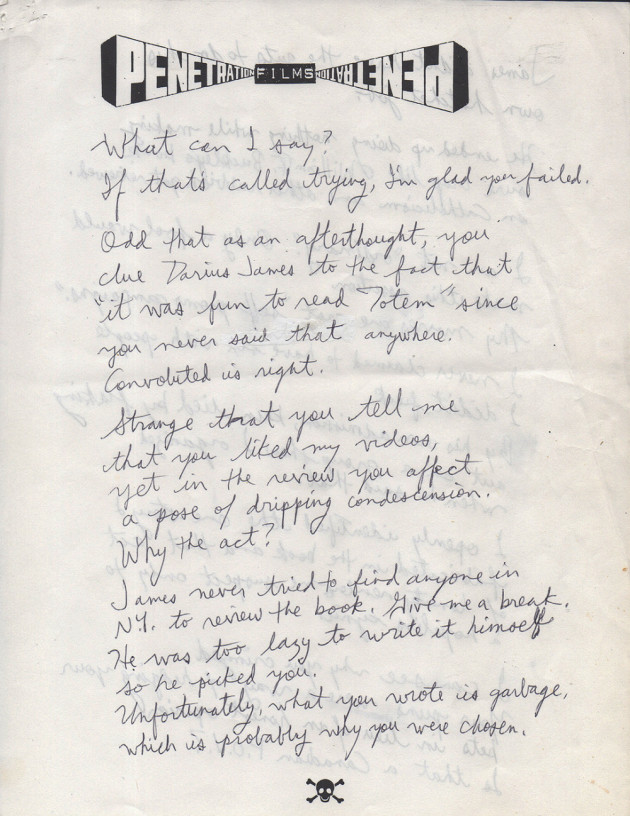 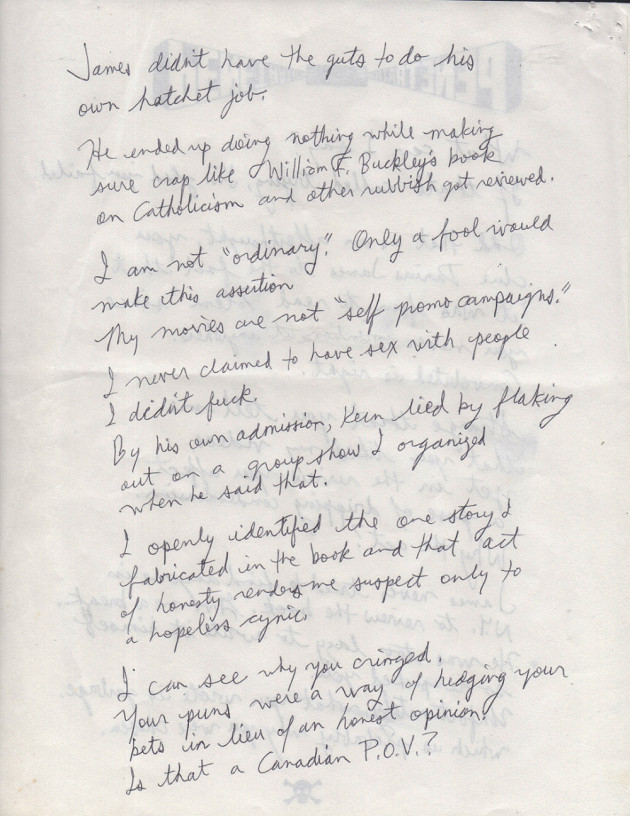 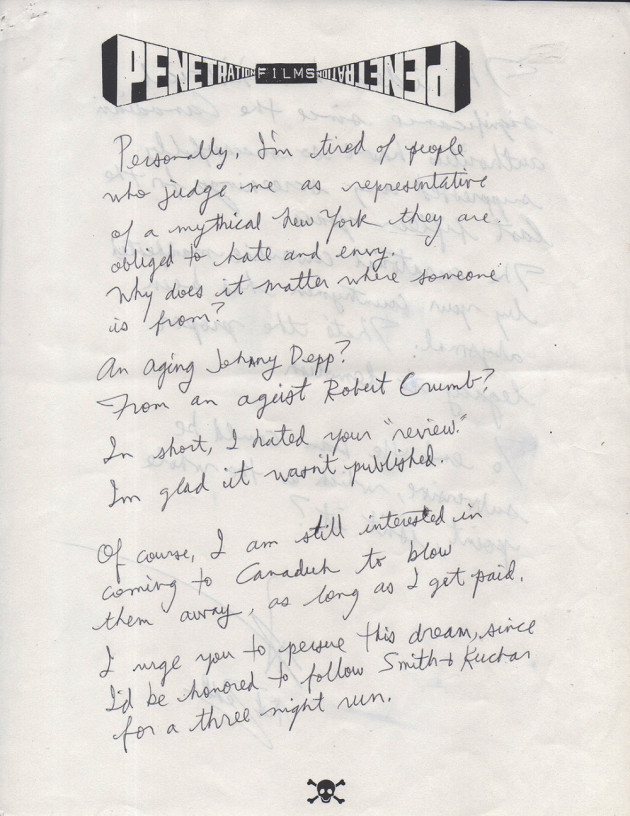 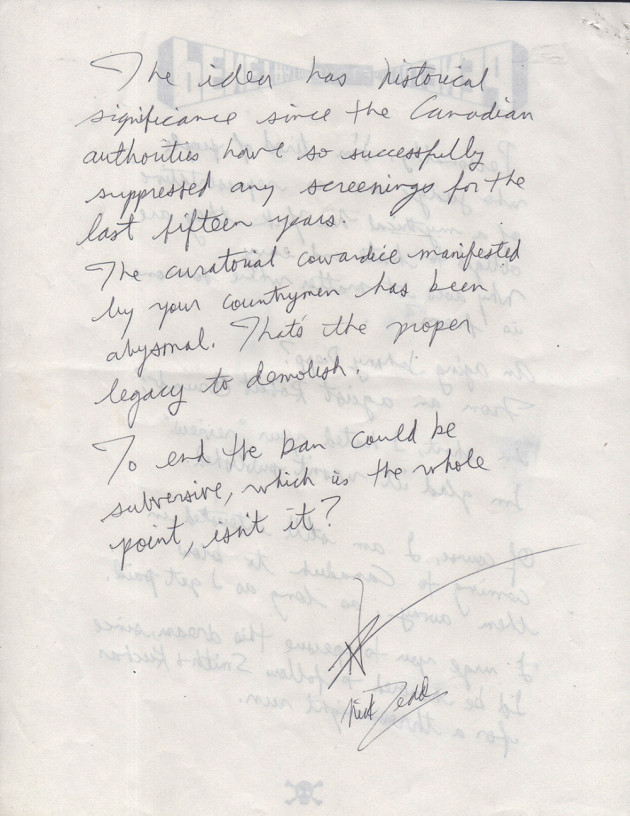 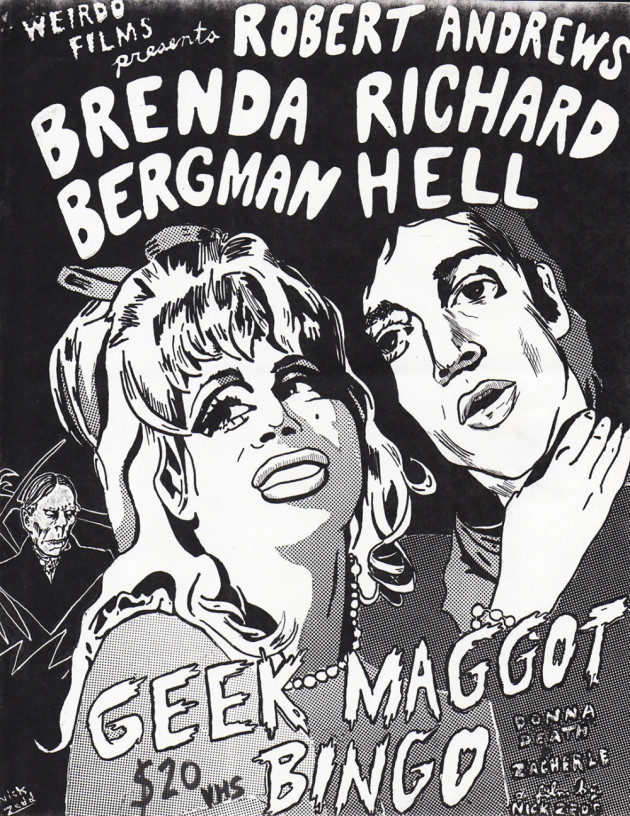 Addendum: I asked author Darius James (That’s Blaxploitation, Negrophobia) if he’d like to provide a rebuttal & he responded with the following.

“I don’t think much of critiquing the dead in a petty situation like this. I was asked to edit by New York Press & I thought (still do) that you were ideal for the job. Zedd is known for his films & you do both film reviews & comics as well as being an active, long-time member of the ’80s underground Zedd was a part of. Funny. I did read Zedd’s book at the time & thought he was a much better writer than he was a filmmaker. Truth be told you’re a far better filmmaker (Zedd told me the first time we met he wanted to be an animator). Sad about Zedd & his end. I didn’t think much of him or his work but he was amusing. And sure you can use my name in his bit. He should be fairly represented. He deserves that.” -Darius James, April 8, 2022 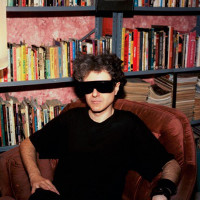