My Letter to Forry

Fans of Forrest J. Ackerman have known for a while that the man who is the single greatest ambassador of fantastic cinema had not been well of late, and will not have been surprised (saddened yes) to hear of his passing on December 4, 2008 at the age of 92. Anyone who grew up in the 1960’s, early 1970’s and was a fan of classic horror and science fiction cinema would have been familiar with Forry’s single greatest ‘offspring’: Famous Monsters of Filmland magazine, launched in 1958. The time was ripe for Famous Monsters magazine. Universal horror classics of the 1930s and 1940s were being reissued to great success, finding new audiences, and the Cold War, as well as technological innovations of the period (color, widescreen, 3-D, television, etc.), proved a boom for horror and science-fiction. Europe was also joining in with its own (first where horror was concerned) wave of important horror and science-fiction works, with films from England (Curse of Frankenstein 1957, Horror of Dracula, 1958, Peeping Tom, 1960), Italy (I Vampiri, 1956, Mask of Satan, 1960, The Mill of Stone Women, 1960), France (The Eyes Without a Face, 1959) and Spain (The Awful Dr. Orloff, 1962). At a time when images from these films were rare, Famous Monsters was the first of its kind and helped promote a sense of history about classic horror, science-fiction and fantasy cinemas to an ever growing legion of young fans (the magazine’s writing style, filled with Forry’s puns and neologisms was aimed at a young audience, since that was clearly the audience for these films). Famous Monsters was not great literature or great criticism, but it instilled a sense of wonder and often stoked the imagination of its readers by a continual run of movie stills and behind the scenes photographs at a time when it was impossible to see images from these films. The magazine also provided a rarified glimpse into many films that were then considered lost, thanks to Forry’s huge personal collection of film stills, posters, memorabilia, props, etc. I will always remember that glorious picture of the Frankenstein monster from the 1910 Edison Frankenstein film, and Charles Ogle’s craggily haired, stitched up monstrosity. That image alone kept me satisfied for well over 40 years until I finally got to see the film on DVD in 2003, when film collector Alois F. Dettlaff made his sole surviving (and almost intact) 35mm print finally available for public viewing. What really set his magazine apart (aside from Basil Gogol’s color covers reproducing some of the greatest horror faces in a spellbinding blend of realism and surrealism) was that he featured not only stars but important behind the scenes people, like directors, special effects artists, make-up artists, and writers, and regularly featured fan photos and letters in his “Fang Mail” section, creating a real sense of community amongst what must have been a real motley gang of misfits, introverts, weirdos, nerds, and monster geeks. While on the one hand the behind the scenes material broke the illusion of cinema, it also instructed and inspired many to follow the footsteps of their heroes (the number of important figures who were bitten by the FM bug to follow their dreams and passions is many, and includes people like Steven Spielberg, John Landis, Joe Dante, Stephen King, Peter Jackson, Rick Baker, and on). Every editor of the dozens of horror magazines that followed in FM’s footsteps will openly admit that their magazine would not exist if it were not for Famous Monsters. The excellent Canadian-based horror magazine, Rue Morgue had a loving dedication to Ackerman shortly before his death in their issue #83, which was graced by a wonderful painting of Ackerman in the style of Basil Gogol. I can’t think of any other single journal or magazine that has had such an all-encompassing influence on its field. 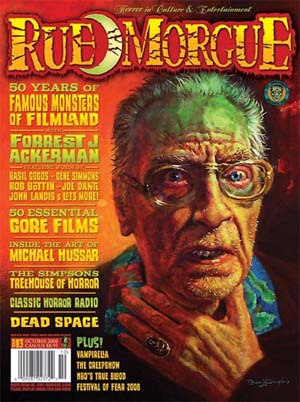 I recently contributed a capsule DVD review of two Masters of Horror television episodes for a local daily newspaper, The Gazette, where I was christened by the column heading as “the Video Geek” speaks. At first I cringed at the association, but then I realized, well, Ackerman was the original horror/fantastic film geek before computers and videos existed, and I started feeling a lot better about being referred to (even if I knew nothing about it) as a ‘video geek’. If it is good enough for Forry….. Back in 1997 Ackerman attended a science fiction convention in Vancouver as part of his 80th birthday celebration. I would have loved to have gone but could not manage it, and decided to celebrate his appearance in Canada by at least writing him a letter to tell what he meant to me (and by extension people of my generation) and wish him a happy birthday. As a personal tribute to him, I will post a completely unadulterated reproduction of this letter I wrote to him on January 18, 1997, months before the premiere issue of Offscreen, being fully aware at how embarrassing it may be, especially my attempts at out punning the pun master (there it is, a video geek and a masochist in the same month!). As you read I will try not to cringe too much:

I’ve “known” you in spirit since the late sixties but never thought seriously about writing to you until reading your column in CULT MOVIES #20 (great mag isn’t it) where you mentioned that you were coming to my home country, Canada, Vancouver for the Northstarcon. With the fall of Mother Russia Canada is now the BIGGEST country in the world geographically, so physically speaking Vancouver is very far away from where I live. I won’t be coming to the event, but it had me thinking how great it would be if it was Montreal or Ottawa or Toronto, all reasonable distances. So I thought, heck I’ll write to you if I can’t meet you.

Happy (soon-to-be) 80th birthday. It’s amazing that your still productive (though not surprising, I wouldn’t want to leave this earth either if I had your film/book/poster/mag/paraphernalia collection!). Kidding aside, I’m about half your age (38), which means that you were about my age when I was born, which means that I was born the year (1958) you gave birth to the first pulp appreciation of the greatest genre known to “man”sters, FM (two great births in one year!). I have a near complete run of the original FM (missing a few of the earlier one’s), but would never sell the collection if I did complete it anyway. Why? Well it just means too much for me, more than the greenbucks (not Hugo) it would translate to.

I’m not “famous” by any means, but have not been able to shake the horror-imagination bug I got in my wee years and have made a life out of film. I teach film studies at a Montreal University, Concordia, and have written horror articles for assorted film journals and magazines; my love for film has taken me beyond the imaginative genres, but horror and the curio still holds the highest rent area in my heart. And I guess I owe most of it to you (no I’m not going to repay you in blood…didn’t Bela give you enough anyway?). And I also owe credit to my uncle, who engineered my first horror film screening by periodically throwing cold water in my face so that I would stay up till midnight to see I WAS A TEENAGE WEREWOLF at age 10 (well it wasn’t Lon Chaney but it made a hairy impression on me anyway).

Your “sons” are all over the place, most evident in the amazing influx of horror/sci-fi fanzines which have splattered onto the scene in the last 10 or so years. Especially the ones, such as MIDNIGHT MARQUEE, CULT MOVIES, WONDER and SCARY MONSTERS, which keep alive the baroque, expressionistic spirit of the founding (reaffirming) fathers of horror-sci-film Lugosi, Karloff, Chaney(s), Whale, Browning, Wells, Pal, Menzies, Lang, Lewton, Pierce, Carradine, Rathbone, Westmore (all 2700 hundred), Schoedsack, Freund, and O’Brien. In many ways you are an amazing role model in terms of career directions, a sort of cine-fantastique renaissance man with your publishing, writing, editing, collecting, production work and (maybe most importantly), (messianic) inspiration. You always reminded me of another great man I was lucky enough to befriend, W.K. Everson, the greatest film historian ever, who passed away last year at the “young” age of 66 (I was so touched by his death that I instinctively wrote an obituary for an academic film association). His book CLASSICS OF THE HORROR FILM was another touchstone for me. (Did you ever meet him?) Perhaps you’ve just been extremely lucky to have fallen in MAD LOVE with the greatest THING in this crazy LOST WORLD of ours. But you’ve nurtured it, loved it, suckled it and spread it in more ways than any other (lucky) person has. Surely stranger things have happened (especially this way!), but if I don’t ever meet you, I implore you to keep on truckin and I thank you for all you have done (just for living I guess).

In the Spirit of Forry, My List Of The Top 10 Fantastic Films Seen During 2008:

1) Let the Right One In (2008, Sweden, Tomas Alfredson) Ackerman loved vampires and this is one of the best vampire films in decades, and perhaps the best film I’ve seen in 2008, period (35mm at Fantasia).
2) In the Folds of the Flesh (1970, Italian-Spanish, Sergio Bergonzelli) Ok, so Forry probably didn’t watch too many gialli, but a big thanks to Severin DVD for releasing this curio in 2008 (DVD).
3) Cloverfield (2008, US, Matt Reeves) Forry idolized King Kong and big monster movies, so maybe he’d approve of this invigorating boost in the arm of reality horror (35mm theatrically).
4) Inside/ A l’interieur (2007, France, Alexandre Bustillo, Julien Maury) Forry would probably pass this one over for the extreme violence, but it is too good for me to pass over (DVD).
5) The Skull (1965, UK, Freddie Francis) One of Francis’ best films as a director, and clever use of point of view (DVD).
6) First on the Moon (2005, Russia, Alexei Fedorchenko) A clever mockumentary that does for pioneering in space travel what Peter Jackson’s Forgotten Silver did for pioneering in filmmaking (35mm at Fantasia).
7) Paranormal Activity (2007, Oren Peli) Reality horror meets good old-fashioned ghost story. Very frightening (DVD).
8) The Witch’s Mirror (1960, Chano Urueta) Mexican take on the Les yeux sans visage/medical horror film, mixed in with a touch of Mad Love (transplanted hand with prior owner’s consciousness) and an the hint of a pseudo-feminist subtext (DVD).
10) The Song at Midnight (1937, China, Weibang Ma-Xu) An oddball mix of horror, propaganda and musical, and of important historical value as the first acknowledged Chinese horror film, riffing on The Phantom of the Opera (35mm at Cinémathèque québécoise).
10) Exte: Hair Extensions (2008, Sion Sono) Ultimate homage and parody of the by now classic J-horror image of the woman with long black hair. Great turn by Ren Osugi as a morgue employee with a real mean hair fetish (35mm at Fantasia).