Lemora, Lady Dracula, or, The Essence of the Repertory Theatre

I was quick to appreciate and applaud the technical improvements in projection, screening, seating, and ambience initiated by the Ex-Centris management since their takeover of Cinema du Parc last year. Even to the point of grudgingly accepting the ticket price increase. I am far less enamoured of the recent change in programming policy that aims at homogenizing the product. You don’t need innovative programmers when you block off theatres for two-three weeks with Gangs of New York, Bowling for Columbine, Divine Intervention, and Talk to Her (although from what I have seen or heard, they are films that deserve to be seen). When you stand back and look close enough, Cinema du Parc is still a far way from AMC, Guzzo, or Paramount. There still are the weekly nuggets and films that would never play at the first run theatres. This is not as much a complaint as an alarm bell. Meaning that if things were to stay the way they are now in terms of the ratio between first runs, recent releases, and repertory/cult, even with the recent tilt away from the latter, I would accept that as a trade-off for the all around improvements and the theatre’s future security. But if the repertory/cult films begin to be squeezed out even more, then Montreal will lose its only true popular alternative venue. And that would be a true shame, especially in a city which once housed up to a dozen repertory screens (going back to the 1970’s, the Vogue Theatre (Wellington St.), The Piccadilly and Cinema Five (Sherbrooke St.), The Flick (Crescent St.), The Monkland (Monkland St.), The Seville (St. Catherine St.), The Outremont (Bernard St.), The Rialto (Parc Ave.) and The Crystal (St.Laurent St.). The new management must keep in mind, that even with the technical improvements, they can not compete at the level of pure spectacle: the big, curved screen, the great comfortable seating, the great legroom level and sightlines, and the booming sound. (And as a non-profit organization, they shouldn’t even try.) So if I am going to see a big budget new release I am going to go all the way, which is why I saw Gangs of New York at the Spheretech (and at a price actually cheaper than Cinema du Parc!). Even with their hands slightly tied by this recent change, programmers extraordinaire Don Lobel and Mitch Davis managed to squeeze in enticing curios and cutting edge films in the December 2002/January 2003 schedule. Films like Crime Wave (the John Paizs film, not the Sam Raimi) Gambling, Gods, and LSD, Night Train, Visitor Q, Rope, Tales of the Gimli Hospital, and, that month’s scheduling coo, Lemora: A Child’s Tale of the Supernatural (1973, Richard Blackburn).

The programming for the recent February-March schedule continues to maintain an acceptable balance between repertory house/cult film (Jesus Christ Vampire Hunter, Street Trash, El, Martin, Blow-Out, Salo, or the 120 Days of Sodom) and first run release (Derrida, Spider, The Crime of father Amaro, About Schmidt, The Pianist, and Die Another Day), and gives further indication of a programming trend which marks a new age in the repertory theatre. The first point is a distinction between the type of first run releases: somewhat ‘arty’ mainstream fare that have played in other major theatres in Montreal and films that have made a mark on the festival circuit but have not been released theatrically in Montreal (the majority being foreign films or US indies). I may have missed or be wrong with a title, but (I’m fairly certain) taken from the recent Cinema du Parc schedules (January 2002-March 2003), the former includes films such as About Schmidt, Adaptation, Bowling For Columbine, Gangs of New York, The Pianist, and Punch Drunk Love; and the latter include Auto Focus, Spider, The Crime of Father Amaro, All or Nothing, and Derrida (I am not calculating the Ex-Centris into this equation, since a) they own the Cinema du Parc and b) for the most part, the common films they played had French sub-titles.). My following point has nothing to do with the quality of said films, but with the possibility of expanding the horizon of potential films for Montreal cinemagoers and keeping in mind the philosophy of the repertory theatre. It would appear obvious to me that, from the standpoint of the mandate/mission of a repertory theatre, the latter group of first run films, those that have yet to be released theatrically in Montreal, are the ones which should be given programming priority.

The second point relates to the welcome theatrical re-release of older films. No doubt buoyed by the successful dissemination of DVD technology, studios are going back into their vaults and literally shaking the cobwebs off of early titles. In most cases providing the best possible prints for DVD companies to release (and digitally clean) new pristine transfers of these films. I seriously doubt that we would be seeing brand new 35mm prints of older classics if it were not because of the added market value boost of DVD. The result is that Montréalers had the opportunity to see (or re-see) excellent film prints of several Luis Bunuel films, Akira Kurosawa films, and Chaplin’s still timely The Great Dictator. I have no qualms and in fact encourage this type of programming. It would appear that the repertory theatre has adjusted its mandate (consciously or not) to meet the new demands and marketplace of the DVD age. The end result is that the repertory theatre is a different beast from its 1970’s, 1980’s brethren. It has expanded to now include old films (usually on 16mm or serviceable 35mm prints, ‘new’ old films, and new, first run films that have fallen through the cracks of the major distributors/theatre chains).

The recent (January 2003) screenings (three dates in January and 2 dates in February 2003) of the rare low budget, cult horror film Lemora: A Child’s Tale of the Supernatural is the perfect example of the pure raison d’être of a repertory theatre. Lemora is so rare a film that up until the recent discovery of a 35mm print, director Richard Blackburn would show the film around horror film conventions on a video master (to continue the DVD synergy, Synapse Films is in the process of releasing a 30th anniversary DVD). Lemora is a fascinating, low budget horror film with an intelligent script, inventive visuals and sound, and strong performances. Although it is far from perfect, it strangely enough succeeds at more levels than it has any right to. It functions as both an atmospheric and genuinely frightening horror film, with enough subtext to keep any Freudian happily writing. The film begins with a 1930’s fedora capped gangster smashing into a room and shooting his wife and lover dead in gangland style. The scene cuts to a Baptist church meeting, with a reverend (played by director Blackburn) giving his sermon of the day. The subject of his sermon is contemporary good and evil, evidenced in the daughter of the man in the opening scene, Lila Lee, a beautiful 13-year old blond girl who sings in his church. Given her bad pedigree, her faith and innocence is, the reverend claims, a testament to goodness in the face of evil (her father). The film effectively recreates the 1930’s, with a genuinely creepy Southern, bog atmosphere and even a few effective startle effects. (As an added curio note Jean-Pierre Gueuns, who gets credit for “additional camera,” is a name I have been familiar with from the academic side of things, with his excellent essay on the steadicam “Visuality and Power: The Work of the Steadicam,” Film Quarterly 47/2, Winter 1993-94, 8-17 and his recent book, Film Production Theory.)

The film is reminiscent of Jacques Tourneur’s 1943 I Walked with a Zombie (scenes of a woman walking through isolated backwoods area, zombie-filled woods, tenebrous lighting) and Bob Clarke’s 1972 Children Shouldn’t Play with Dead Things (pasty-faced zombies, use of slow motion), while doing what Eyes Wide Shut tried to do but more successfully: a character walking through their own sexualized dreamscape. The film is full of subtext, and can be read, along with a straight ahead cracker of a horror film, as an adult Little Red Riding Hood, or Freudian tale of a girl’s coming of sexual age. The lead character, 13-year old Lila Lee (Cheryl Smith), opens the film singing “Rock of Ages” in a Baptist Church. According to the reverend’s sermon about good and evil Lila Lee, offspring to an ‘evil’ father, remains a pure symbol of goodness. But is she? Lila gets a letter from a lady named Lemora (Leslie Gilb), telling her that her father is 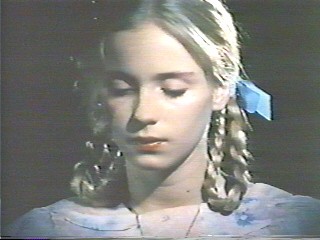 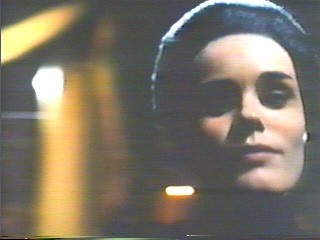 And her sexual ego, Lady Lemora

with her in a town called Asteroth and that he wants to see her before he dies. She leaves the ministry on her own in search of her father. She gets there by way of an eerie bus ride where she is the only passenger and a harried, unkempt driver alternates between being her protector and aggressor. Blackburn emphasizes Lee’s sense of isolation with great depth of field shots of the driver in the right foreground and Lila in the left background of bus. From this point on she encounters a series of sexual encounters or scenes of sexual overtone. Everyone seems to want a piece of Lee’s virgin body, first the reverend, then a man she attempts to hitch a ride with, the bus ticket vendor, the bus driver, and ultimately, Lemora. In one of the best and most sexually charged scenes, Lemora, who eventually vampirizes Lila, gives her a bath while contemplating Lee’s crucifix bearing neck. 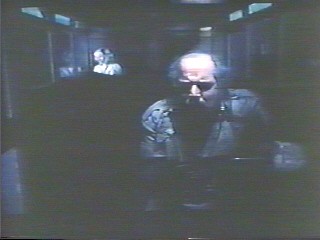 The film has echoes of a Mario Bava film, especially the girl, who is a dead ringer for the blond devil girl from Kill Baby Kill. Other Bava touches include the freeze frames, the harsh reds and greens, the shots of Lee framed from behind a window, the uncanny depiction of children, and the extensive scenes of a woman being pursued. After finding her way through a zombie filled woods, Lee is abducted by an old hag, which leads to a great scene of the hag trying to scare her in song, with the scene cutting between circular moving close-up’s of the hag and Lila. For most of the film Lee is dressed in a nightgown and spends the time barely eluding zombies and vampires by climbing trees, hiding under stairs and porches, etc., as if in a dream. The finale tries to inject a sense of climax by quickly cutting between the present (Lila observing an apocalyptic battle between the zombies and vampires) and the past (revisiting earlier moments). Included are the scenes at the Baptist church. The film ends back at the church, which suggests one of two things: that the middle bulk of the film was an extended flashback, and she was already ‘vampirized’ at the beginning. Or she has returned as a vampire to soon prey on the villagers. As the film finished and the lights were slowly turning up and people leaving their seats, I overheard a couple sitting behind me discussing how much they enjoyed the film. At one point I heard the man rhetorically ask his partner, “Boy, how come I never heard of this film!” That, my good reader, is the raison d’être of a repertory theatre. 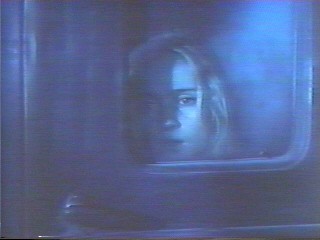