“Is Donald Trump really just Andy Kaufman in disguise?” wondered Newsweek earnestly in 2016. On the eve of the Republican National Convention the magazine dedicated a 4,000-word investigative piece to the conspiracy theory that the would-be President of the United States of America was nothing but an elaborate prank by comedian Andy Kaufman. Notwithstanding the fact that Kaufman passed away in 1984. Allegedly, as many believe he simply faked his own death. Perplexing and offensive, commanding a plethora of alter-egos and constantly striving to push the boundaries of comedy, Andy Kaufman was truly an idiosyncratic performer. When Jim Carrey was cast in the role of Kaufman in Milos Forman’s 1999 biographical drama Man on the Moon it seemed like a match made in heaven – one comedy giant in the shoes of another. But as Chris Smith’s 2017 documentary Jim & Andy tells us the story is as confounding as the normalcy of a reality TV star in the Oval Office.

In a 1999 interview, Milos Forman solemnly declared he only met Jim Carrey twice during the filming of Man on the Moon. Few details emerged about the production, but Hollywood legend had it that in a feat of extraordinary performance Carrey disappeared into the role of the impenetrable comedian. The close to hundred hours’ worth of behind-the-scenes material never made it to press kits or DVD extras, was disowned by Universal Pictures and remained in the possession of Carrey. It was his close friend Spike Jonze who managed to convince the actor to finally relinquish the material and open up about his experience. The result, a combination of the behind the scenes footage and interviews with Carrey in 2017, is Jim & Andy.

We as an audience understand that a film is an artifice. It is a product of careful planning and professional labour, the work of teams of people both in front of and behind the camera. How do we then come to terms with behaviour that has no semblance of professionalism and endangers the physical and mental health of cast and crew? Bringing Kaufman’s affinity for surprise, eccentricity and sheer mayhem Jim & Andy shows Carrey fully inhibiting the late comedian’s persona including, among many others, his infamous alter-ego of Tony Clifton – the obnoxious and utterly talentless cabaret singer. In an impeccable Kaufman-esque turn, Carrey at one point turned up on the set of Man on the Moon as Tony Clifton demanding that production is shut down since Carrey is “making him look bad on film”. Production stalled, people were baffled, and the sense of unease was gradually growing. Milos Forman is seen pleading with Carrey as Clifton to please give up the act and let him talk to Carrey. “I will ask him to call you” said Carrey in Clifton’s unique drawl and wondered off the set. Is this a perfect assimilation or a destructive play acting? Jim & Andy‘s director Chris Smith suggests there is more to Carrey’s method and madness than meets the eye. 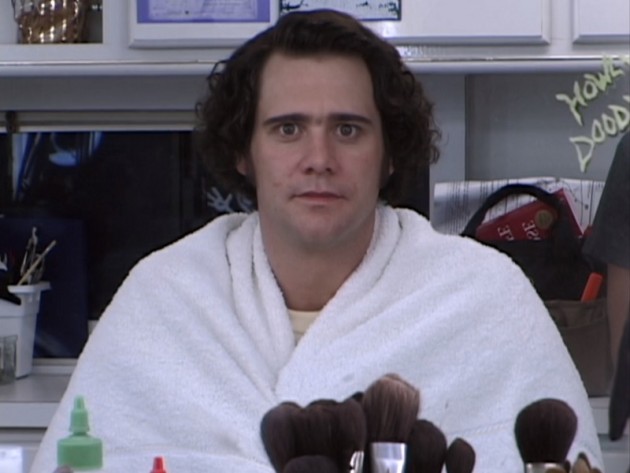 One of the great joys of Jim & Andy is its ability to set up a friendship based on emotional support between Jim Carrey and Andy Kaufman even though the two never met or even talked to one another. Carrey idolized Kaufman from a young age and was enthralled by the man he saw as constantly challenging performative conventions with his public appearances. When he landed the role of Kaufman in Man on the Moon, Carrey was ecstatic and threw himself into the role. He didn’t simply want to portray his idol; he wanted to be him at a time of Kaufman’s life when a film is being made about him. “How far should I take it?” he asks in the film. “How far would Andy take it?” Carrey gave himself up through his performance to do justice to the legacy of his comic idol. But Kaufman is equally there for him. Early in the interview Carrey tells us his father passed away shortly before production began on Man on the Moon. He is visibly shaken by the event, even at the time of the interview in 2017, with tears rolling down his face. It appears that at a time of great emotional upheaval Carrey found solace in a kindred spirit, a soul he could lose himself in while coming to terms with the passing of a loved one.

It is perhaps a missed opportunity in an otherwise outstanding film that it only captures Carrey’s reflections in 2017. Candid and articulate, the actor speaks openly about his behaviour on set while framing it as a spiritual possession. “Andy Kaufman showed up, tapped me on the shoulder and said ‘Sit down, I’ll be doing my movie.’ It was out of my control” This stands in stark contrast to Carrey in 1999 when he, in one of the few contemporary interviews about Man on the Moon, says he never worked with Milos Forman, only Andy and Tony did. With a twinkle in his eye, 1999’s Carrey seems boisterous and unapologetic. It would have been intriguing to see why the actor relinquished his agency in the past 18 years or how his views of the events have changed. 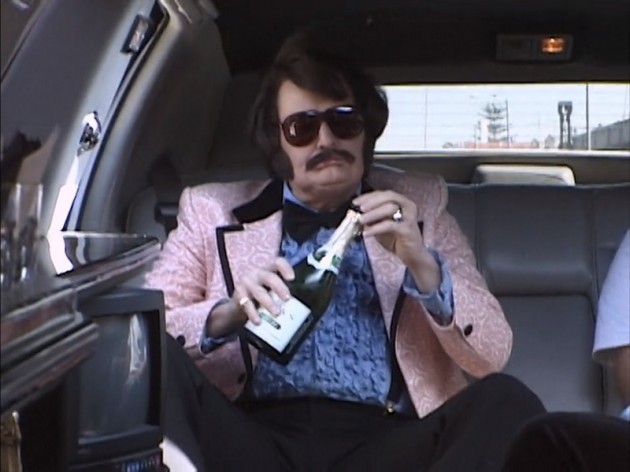 Towards the end of the film Carrey asks the interviewer – and in turn us – “Who do you know even when they are right in front of you?” The question speaks directly to the heart of the film and in turn performance and identity. Carrey knew Kaufman as much as anyone could, based on his public appearances. He applied the anarchic, unhinged persona to Man on the Moon on and off camera. Similarly, we know Carrey, based on his performance in films and interviews such as this. But who is playing whom? Jim & Andy doesn’t seek answers. Instead it sets out to is show us that self-serving mayhem and the ultimate immersive performance can be two sides of the same coin. It shows us how deep the rabbit hole goes and what lies at the bottom of it – a curious, surreal mix of reality and fiction where one abandons care and attention, relinquishes identity and wholly submits to a performance. What performance could be more outrageous than Tony Clifton? Perhaps a reality TV star turned Commander in Chief keeping the world on edge? Andy Kaufman would be delighted.

Jim & Andy: The Great Beyond is available on Netflix.