The Music Room is a film led to greatness by Satyajit Ray’s devotion to a single mood: elegiac. Ray isn’t alone in sculpting this great piece. The acting by Chabi Biswas as the crumbling aristocrat Huzur Biswambhar Roy, cinematography by Subrata Mitra and music direction by Ustad Vilayat Khan all contribute immensely. Set in the 1930’s with the emerging nouveau riche, Roy is the last in a long of rich patriarchs, stumbling as his estate diminishes but clinging till the end to his refined means. Roy lives in a mansion in the middle of a desert, a symbol of his isolation from encroaching destitute. Roy is frequently filmed alone, as are other subjects (his dog, horse, elephant). The film begins with the elderly Huzur sitting alone, staring blankly in his back garden overlooking a once proud space. He is served by one of his two humble and loyal servants. The story flashes back some 15-20 years to a more glorious time when the younger Huzur, with his young son Khoka and wife Padma (the realist/pragmatist to Huzur’s idealism) was the class of his region, hosting luxurious concerts in his home. Huzur’s centerpiece, his ivory tower and final refuge from the external reality/realism is the titular music room. The room reflects Huzur, his pride, his heirloom, his inner soul. Ray draws us in spatially, in concentric circles, from the outer oasis, to the backyard pool/yard, to the mansion, to the music room and further yet, the music room’s stage. Likewise Mitra’s camera often, and nearly always in relation to Roy, dollies inwards toward Roy. The movement not only serves to honor the character and make us feel more empathy toward him, but counterpoints the film’s maze-like construction. 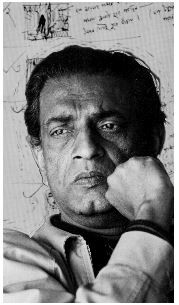 Many of the film’s best moments take place in the music room. For example, the first concert during the flashback, in which the camera encircles Roy surrounded by his guests and cuts into the long takes only to underscore Roy’s sense of tranquillity and contentment; the concert which is interrupted by the tragic news of his son and wife’s drowning; and the final concert, Roy’s swan song which leads to his psychological break from reality into momentary insanity (he imagines the candles in the room extinguishing themselves one by one). In each of the concerts the music varies. In the first we have more of an ensemble piece; in the second the singer dominates with his emotive voicing; and a phenomenal dancer highlights the third. The final concert occurs years after Roy, saddened by the double deaths of his wife and son and his failing estate, has closed the music room and remained living on the mansion’s second floor. With all his gold, silver, and jewellery gone all that remains is a little money. He uses it to stage one final concert. Roy’s continued carelessness toward his economic state can be read in several ways. If we read it critically, it becomes a sign of his selfishness and disregard for his families well-being. In another sense his gesture can be seen as an act of defiance against the upstart moneylender who is out to show Roy up, and a romantic tribute to the “class of class.” A third meaning, psychological, can see the acts as a reflection of how deeply ingrained the caste system and colonialism are in India.

When the drunken Roy explains to his servant why he is different from Tulsi, the estate manager, he speaks in English and refers to his “blood,” and then points to the three portraits of his ancestral forefathers (father, grandfather, great grandfather) that hang around the music room’s huge mirror. Ray’s genius is in balancing these three readings so that our emotional relation to the character is complex and in a sense more critical and involved. The film ends with the drunken-maddened Roy, against the wishes of his servants (servile to the end), riding his horse for one last jaunt through the desert. The final moments are reminiscent of Kenji Mizoguchi, especially Sansho the Bailiff (camera movement that moves away from the center action; set in an arid zone). Roy is thrown violently off his horse. The servants run to their fatally hurt, bleeding master. With the earlier death of his son and now himself, his rich, aristocratic lineage has come to an end. In this touching moment Ray has the camera track away (left) from the body to stop at his fallen headgear. This image dissolves to the final shot: that of the darkened chandelier swinging aimlessly in the darkened music room.

The other pillar of Indian cinema greatness is Ray’s (lesser known) contemporary, Ritwik Ghatak. In the same year as Ray’s majestic The Music Room , Ghatak made his first feature film, Ajantrik , also a film about obsession (to be more precise, not the first film he made, which would be Nagarik , but his first film to be released). The film begins with two comic-relief men looking for a taxi to drive them to a nearby village. A boy leads them to an obstreperous taxi driver with a battered, ancient Chevrolet. Roughed up and haggard, the two men finally arrive at their destination. At this point Ghatak shifts the film’s emphasis from the two men to the cab driver, and we slowly learn of the cab driver’s (Bimal) obsessive relationship with his car. Kali Bammerjee’s performance as Bimal is excellent, displaying subtle nuances of a character slowly losing touch with reality. At first Ghatak treats Bimal’s obsession humorously. Bimal treats his car as a living thing, giving it a name (Jagaddal), pampering it, and defending it against insults (as one may protect a lover). Ghatak underscores the humor in this relationship formally, with for example human gurgling sounds as Bimal feeds the radiator, and moments of fantasy (the car’s headlights move about as if they were eyes). 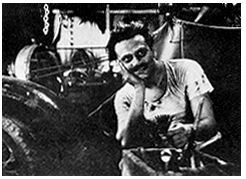 The film’s tone and style shift approximately halfway into the film, with humour and playfulness giving way to an eerie subjectivity (less dialogue, a more pronounced emphasis on the landscape, heightened use of ambient music and sound effects). A key moment in signaling this shift occurs during an extended solo drive when Ghatak cleverly manipulates the conventional use of point of view cutting. A disturbed Bimal is driving along mountainous roads. Ghatak cuts from third person shots of Bimal in medium close- up at the wheel and point of view shots where we see the hood of the car and the road. However, in one of the supposed point of view shots we are shocked when we see his car enter the frame from a bend in the road! The shot is equivalent to those trick point of view shots found in the films of Carl Dreyer or Michelangelo Antonioni where a shot clearly begins as a character’s subjective point of view but then as the camera continues to pan or dolly it picks up the character in the frame, shifting the point of view to third person. The simple effect creates a jarring sense of disorientation that places us poetically into Bimal’s crumbling psyche. 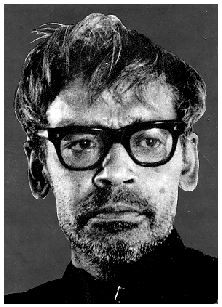 In reference to Bimal, Ritwik Ghatak has said: “You can call my protagonist, Bimal, a lunatic, a child, or a tribal. At one level they are all the same. They react to lifeless things almost passionately. This is an ancient, archetypal reaction….The tribal songs and dances in Ajantrik describe the whole cycle of life – birth, hunting, marriage, death, ancestor worship, and rebirth. This is the main theme of Ajantrik , this law of life..” Throughout the film characters treat Bimal’s obsession with ridicule, scorn or puzzlement. Their actions and dialogue often raise the question of why Bimal is not able to sever his irrational association with this crumpling, decrepit vehicle. Even after the car finally gives in to its age, Bimal, an otherwise miser, spends a huge amount of money on new car parts to render life (only temporarily) back to Jagaddal. One could offer a metaphorical reading of this “fear of separation.” Ghatak was born in Dhaka, the capital of Bangladesh and the then center of cultural activity in East Bengal. The Independence of India in 1947 led to the partition of Bengal (West/East Bengali), which left collective emotional and psychological scars on many Bengali families. Ghatak, who greatly lamented the division of Bengal, has dealt with this pain of separation overtly in many of his later films. Perhaps, subconsciously, it was already present in Ajantrik ? In either case, as a study in obsessive behavior or a metaphorical enactment of political partition, Ajantrik is a remarkable first feature.