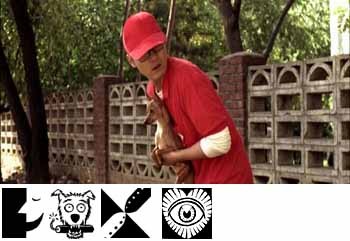 The icons above have been festival staples since 1995. In 2001, the festival changed names from Incredibly Strange to Beck’s Incredible. This year I look at the icons, and for the first time, see BLOCKBUSTER, a rating which most certainly would have disqualified anything from even thinking of coming near the Incredibly Strange Film Festival. Like Spike and Mike’s, the Incredible Film Fest is becoming something of an institution.

The fun of the festival used to be a chance to see films that would never hit the South Pacific by any other means. This year, you can enjoy the festival at home. Dress like Xena, get some popcorn and rent Akira and Blowup from videoland. This year’s festival standards have been altered such that the word Asian now serves as a synonym for incredible, thus bringing South Korea’s black comedy, ../images/photos/. Thoroughly conventional, Barking Dogs is exceptionally crafted, and while I don’t leave the theater feeling righteous, I do leave entertained.

In an ant farm apartment complex in the suburbs, Yoon-ju spends his days at home, tormented by a neighbor’s yapping dog. He’s a graduate student dying to be a professor, but his wife is both vicious and pregnant, and the only way to achieve promotion is a healthy bribe. Hyun-Nam makes her days as the apartment office secretary bearable by inventing new ways to avoid work and dreaming of becoming a hero by thwarting criminals. When she witnesses the murder of a cuddleable pooch, she has herself a mission.

The film as a whole is like Mamet with a sense of humor. It’s a rare movie that’s enjoyable despite the fact you feel indifferent at best to all the characters. No fancy filmmaking, but a script tighter than the censor’s asshole. An essay on suburbia with a bitter smile. 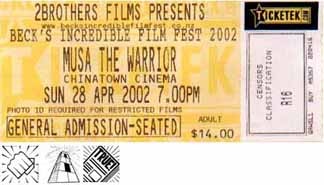 A small population of Koreans fight desperately for their lives, caught in a conflict between two warring empires. In addition to the plot of the Cold War, this is also the plot of Musa the Warrior. Northeast China, 1375, a Korean diplomatic envoy has botched their mission to the Ming government. On their way back home, they are attacked by Mongol forces, who, it is later discovered, have the Ming princess captive. In a bid to win back the favor of the Mings and complete their original mission, Korean General Choi decides to rescue the princess. Fortunately, a slave in his company, Yeesol, is the baddest fighting machine in the East, and also has a thing for the princess. The Mongol general, Rambulhwa, is not going to let them get away with this, and the chase begins.

The Koreans must deal not only with the Mongols chasing them, but with the tantrums of the princess, and the dissent in their own ranks. General Choi’s inexperience and desire to impress the princess cloud his decision making. After half the Koreans are killed by Mongols and Choi’s planning, the men turn to the more experienced and level-headed Captain Daejung for leadership.

It would degrade a warrior’s honor to have it any other way, so basically everyone but the princess dies in the final battle. Killing seems to be the only way men can show their true affection for one another. While everyone likes to look at the princess, her personality and station leave out the possibility of actual companionship. As in most war movies, the men’s affection for each other is the deepest emotion, and in conveniently dying, they avoid playing out the consequences.

It must be every cinematographer’s dream to shoot a film in a Chinese desert, and it’s no drag for the audience either. As with Barking Dogs, Musa is a superbly crafted and executed piece of cinema. The camerawork is exceptional, and unlike in most action movies, the characters have some depth and a lot of nuance. At this point, I feel obligated to mention that the princess is played by Crouching Tiger’s Zhang Ziyi. There’s no kung-fu in this one, but plenty of sword and spear fighting for those hungry for violence.

Like Barking Dogs, Musa is anomalous to the festival in both its extraordinary non-weirdness and its non-ironic entertainment value. One of the obvious effects of the Cold War has been the adoption and improvement of Hollywood movie style by Korea. Musa doesn’t have the publicity connections to make it a blockbuster in the West like Crouching Tiger, but it doesn’t have the geniuses trying to make a war story into a date movie either.

It is apparently highly entertaining to watch The Wizard of Oz on screen while listening to Pink Floyd’s Dark Side of the Moon and tripping. Unfortunately, acid is not included with the price of admission. What is provided is a list of a hundred miraculous coincidences between the music and the pictures. Believers claim some spiritual synchronicity to be responsible. Myself, I come from the school which says even in a thousand years, a thousand monkeys with a thousand typewriters would be lucky to plunk out Hello Dolly, let alone Hamlet.

I walk out of the theater feeling neither righteous nor entertained. But I walk out having wasted only twenty minutes, and can at least feel superior to the poor sods who feel obligated to sit through it because they paid for it. With this free time, I go home and simultaneously play Dr. Strangelove and They Might Be Giants Apollo 18. There are also at least a hundred serendipitous coincidences. I’ll see if I can get people to pay twelve bucks to see this.

There’s plenty of the graphic action the teenagers were waiting for, though it’s not especially sexy. Still, it’s an interesting bit of trivia seeing video evidence that there’s an agent who requires all his actresses to have sex with him as a “screen test.” For everyone hoping to see lots of money shots, though, it’s not an especially interesting film. For someone interested in a critical, self-reflexive film on the large workings and intricate minutiae of an industry that churns out thousands of films and produces eight billion dollars in revenues every year, it’s worth a watch.

An excellent examination of the production industry itself, the film lacks any examination of porn’s effects on viewers or society at large. Despite justified claims of being sensationalist and exploitative, the Incredible Film Fest is also one of NZ’s few outlets for intelligent documentaries that go beyond the television disease-of-the-week standard. www.pornjourney.com 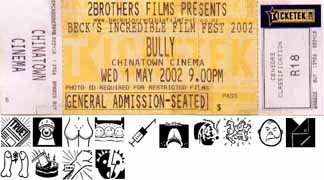 In his second feature, Bully, director Larry Clark shows his amazing depth. Having dealt with violent, ignorant teenagers in New York (Kids), he now moves on to violent, ignorant teenagers in Florida. Roughly based on a true story, Bully’s bully is Bobby, best friend and occasional pimp to Marty. When Marty gets a new girlfriend, Lisa, who also suffers at the hands of Bobby, they and a few friends with nothing better to do decide to kill the bully. After stabbing him, they dump him in the swamp hoping the gators will get him.

There are all manner of ways for society’s moral guardians to be outraged by this film. It has been scorned for its homosexual content. Bobby earns a lot of his income by pimping out Marty for strip shows and phone sex, as well as videos for the lonely, middle-age gay men of Florida. Teen sex is another sticking point for those who love moral high ground, but the eyebrows raise over its manner of depiction than the subject matter itself. I do not recall any outrage over American Pie. Bully gets the naughty marks because unlike slick Hollywood work, its verité style feels visceral and real, more like a snuff film than Dead Man Walking. In comparison to sex and murder, heavy drug use seems relatively minor. What stands out more than each of the kids’ individual sins, is their lack of distinction between any of them. The characters barely distinguish between playing videogames and tossing a corpse in the swamp.

My moral objection to the film is that while I don’t enjoy it, I can’t feel righteous for watching it either. Unlike every other teen movie ever made, the images and dialogue bear some resemblance to the behaviors of suburban teenagers, whose social company I would happily pay the price of admission to avoid. While moral outrage against the film has prompted its removal from regular release at New Zealand’s Rialto theaters, the national censor seems to be onto something by allowing it. For all their reckless and deviant behavior, the guilty parties are duly punished to the full extent of the law, in a retributional justice worthy of any Hollywood blockbuster.

Far from being a revolutionary work, Bully feels like a film commissioned by the Christian Right as an example of the country’s moral degradation, needling away at the deepest fears and prejudices of middle America. With Bully’s help, brethren, I’m sure we can pass legislation ensuring the incarceration of all children from the ages of fourteen to twenty-one.

Remember that movie where this one guy owes these other guys a lot of money, and then steals it, and the guys he stole it from come hunt him down? This is that movie. I clearly recall there is some business with yakuza, and a cross-dressing rent boy, a Thai prostitute, and a laid-off businessman. The only thing more amazing than the quantity of violence in this movie is my total indifference to it. The only interesting thing I take away from former manga artist Takashi Ishi’s film is that tough economic times in Japan have inspired a film equally tough to get through. I suspect the only reason it is even screening overseas is a small part played by Takeshi Kitano, breaking daring new ground as a silent tough guy with a habit of killing people.

Rather than waste valuable and limited screenings on Gonin, the festival would do well to screen some local content. A retrospective on the work of Peter Jackson would certainly qualify as incredibly strange.