For the first time at Fantasia, the organisation Ciné-Asie ran a series of three film forums concurrently during the Film Festival. I was a guest on the forum entitled “Hong Kong Cinema” on July 26. Other panelist were (the star) Johnnie To, Montreal film critic Dimitri Katadotis (who moderated), Peter Rist (professor, Concordia University), and Anthony Timpone (editor, Fangoria magazine). At one point, there was the possibility of the forum being collected in print form, but this seems highly unlikely now. So, I have decided to present my contribution in a semi-essay form.

With some of the biggest Hong Kong stars and directors leaving or having left the tiny island for the greener pastures of Hollywood, it is apparent that a cultural rendezvous of sorts is occurring in which both national cinemas are beginning to overlap. In fact this is merely a continuation of what Hollywood has always done better than any other industry and what has helped keep it the most powerful and influential image-making machine in the world: its ability to seamlessly assimilate from host cinemas that might otherwise prove competitors. The Hong Kong influx into American cinema is evident not only in films directed by or starring big name Asian figures (Michelle Yeoh, Chow Yun-fat, John Woo, Jet Li, Tsui Hark, Ringo Lam, etc.), but in the release of Asian films into the US market (Police Story, Black Mask) and the “asianization” of American films of a particular style (i.e. Reservoir Dogs, The Big Fight, Face/Off, Replacement Killers, Hard Target, Broken Arrow, Mr. Magoo, Maximum Risk, Desperado, Double Team, Matrix). I will argue, however, that as much as this is true, there is also much about Hong Kong cinema past and present that will never be assimilated by US cinema, for such reasons as economics, production method, censorship, and audience sensibility and expectation. 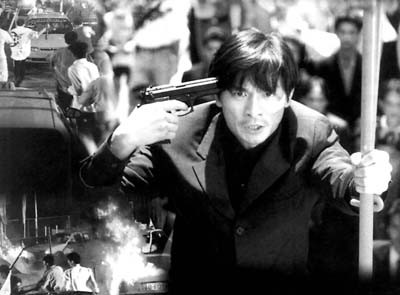 The one word that best expresses this resistance to assimilation is: excess. By this I mean an aesthetics of excess that can be seen across most Hong Kong films in the general sense of a narrative style couched in a hyper fast pace and foregrounded visual style. And in specific instances, an excess of violence and luridness unaccompanied by a sense of morality. Just compare the two characters that won respective Best Actor awards, Anthony Wong in The Untold Story (1993) (The Untold Story Reviewed). and Anthony Hopkins in A Silence of the Lambs 1991), which was actually a big influence on many category three films (Doctor Mack 1992, Remains of a Woman 1993, Chinese Torture Chamber 1994).

For all this cross-pollination there still are differences that will never allow for a perfect marriage. For example, the bridge between art and popular cinema is perhaps less now in Hollywood than it ever was, with the rise of so many small and large independent productions looking for a particular niche market. Though “art” is rarely talked about in HK, if you compare the average HK product’s sense of style, experimentation, etc., you will see that the gap between art cinema and popular, as i t exists in US, is smaller in HK. A good example is the “Young & Dangerous” series, which was targeted for a domestic market and would not travel well into the US marketplace.

It is interesting to note that Hong Kong is the only Asian national cinema to be discovered in the West through popular genre: Bruce Lee and the martial art film in the 1970’s. This in comparison to other Asian national cinemas, which were introduced to the West through arthouse/auteurist channels: Japan (Akira Kurosawa, Kenji Mizoguchi, Yasujiro Ozu), India (Satyajit Ray, Ritwik Ghatak, Taiwan (Edward Yang, Hou Hsiao-Hsien), China (Chen Kaige, Zhang Yimou), and Iran (Abbas Kiarostami, Mohsen Makhmabalf, Majid Majidi, Dariush Merhrjui). Hence on the surface Hong Kong may seem like an extremely good match to Hollywood, because Hollywood is also first and foremost a popular entertainment machine, as is HK cinema. The move to the big US market can also be seen as a natural outgrowth of the larger globalization of industry and the global market economy, where capital shifts are frequent and professionals go where dollar is. Which reflects the importance of Asia in this new Global Market Economy (what Steve Fore calls the “design professions” [design, TV, music, film, advertisement, fashion, architecture] in his important essay, “Home, Migration, Identity: Hong Kong Film Workers Join the Chinese Diaspora” in Fifty Years of Electric Shadows, The 21st Hong Kong International Film Festival, 1997, 130-135.) 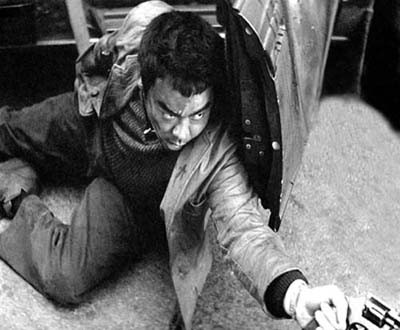 In the same essay, Stephen Fore points to Hong Kong’s cultural cosmopolitanism as another aspect which makes the Hong Kong-US cinema exchange a potentially smooth merger. This is a major reason why Hong Kong cinema has been accessible and attractive to Western audiences (Hong Kong films are full of intertextual references to other Western films, with John Woo being exemplary), and in turn why Hong Kong film artists have been able to adjust to Hollywood’s professional norms. Though of course cultural great differences remain and not all free market economies are the same.

As much as the above is true, there is also much about Hong Kong cinema past and present that will never be assimilated into US filmmaking. Some critics, including American critic and scholar David Bordwell, have written about this difference in reference to the action film and how the Hong Kong variant is better able to maintain the integrity of the completed action than its US counterpart. Bordwell writes:

“There is as well the expressive amplification of action. At bottom, this represents a willingness to go beyond Western norms of restraint and plausibility -to surpass that appeal to realism which makes the typical Western action scene comparatively diffuse in its stylistic organization and emotional appeal” (“Aesthetics in Action: Kung Fu, Gunplay, and Cinematic Expressivity” in Fifty Years of Electric Shadows, The 21st Hong Kong International Film Festival, 1997, p. 81-89).

This can be applied as a general rule to other genres: horror, comedy, and melodrama. Across all genre, to varying degree, Hollywood realism imparts a stylistic distance that allows the spectator a certain emotional space in which to observe the narrative unfold. Whereas getting emotionally and viscerally involved is precisely what Hong Kong films do so well. Bordwell actually compares Hong Kong cinema to Sergei Eisenstein “montage of attraction” theory, where everything is in the service of eliciting an audience response. He calls Hong Kong cinema “ecstatic cinema”. Eisenstein wrote about three types of audience responses: intellectual, emotional, and physiological. Hong Kong cinema alternates between these three responses more often and at quicker rate than in any other national cinema (think of the way Woo alternates between violence and sentimentality in A Bullet in the Head, or the drastic emotional shifts in the audiences character empathy in The Untold Story). Whereas ultra-violence has its place in selected Hollywood genres, the horror film for example, ultra-violence ranges across all possible genre in Hong Kong cinema: Horror, Horror-Comedy, Category 3 (Story of Ricky, The Untold Story, Red to Kill, Run and Kill, Dr. Lamb, Naked Killer, Viva Erotica, Sex and Zen); Exploitation/Docu-drama (Man Behind the Sun); Gangster (Beyond Hypothermia, Odd One Dies, Beast Cop); Prison (Prison on Fire 1&2), and Period (The Assassin).

In a recent attempt to rethink American cinema along the lines of cognitive theory rather than narrative theory, scholar Dirk Eitzen writes, “What the average moviegoer wants most of all from movies is not narrative per se but strong and concentrated affective responses. Hollywood is an emotion-making machine rather than story-telling machine” (“The Emotional Basis of Film Comedy” in Passionate Views, ed. Carl Plantinga and Greg M. Smith, 1999, p. 84-99). This may the case with Hollywood, but in relative terms, is truer for Hong Kong cinema, a virtual “emotion-making machine”.

No matter how much US films incorporate from Hong Kong style and talent there will always remain certain aspects of Hong Kong cinema, many of which are grounded in cultural difference, that resist assimilation. Within this mix there remains the disturbing potential for racism, which is an issue in terms of the way US films have stereotyped Asian characters. If we look to history, Hollywood depiction of the ‘other’ has been abominable. And things are not necessarily getting better. Just look at Jet Li’s character in Lethal Weapon 4 (and we all remember The Green Hornet don’t we?), or more pointedly, the awful representation of the Iraqi in True Lies. Surely Hong Kongers, with their cultural cosmopolitanism, must feel this stereotyping in a great way. It must be difficult for them to adjust from such a mixed, heterogeneous postmodern society to one that has such a strong sense of a singular identity. It is difficult to gauge longevity and how far acceptance of HK cinema culture will go into the US mainstream. At the end of his essay “Home, Migration, Identity: Hong Kong Film Workers Join the Chinese Diaspora”, author Stephen Fore raises several questions in this regard (p. 134-135). They can be summarised as follows. First of all, the notion of Global Entertainment is still defined as/by American film, though that perception might change every so slightly with influx of Hong Kong talent. Secondly, one must wonder whether the Asian talent move to US is permanent or temporary? And who is Hollywood targeting with these Asian influenced films? Also, at the same time that Hollywood seems to be “opening up” to the East, there is the specter of “Americanisation”, where things tend to be reduced to a universal standard that makes it easy for US products to be sold worldwide, across different cultures. Which makes one wonder whether this US ‘opening up’ isn’t also (or mainly) a strategy to gain a stronger foothold in the Asian markets. So we can see that when questions of culture, economy, and industry are placed together in this way, the Hong Kong-US cultural exchange plot thickens. 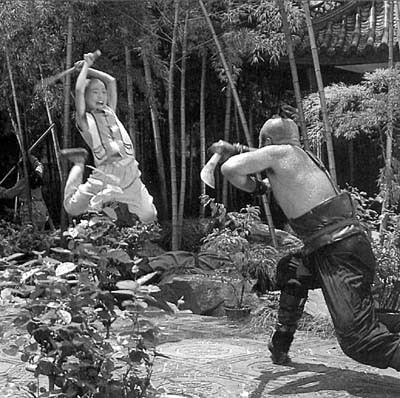 The Kids from Shaolin