Twist and The Bay of Love and Sorrows

Twist (Canada, 2003, dir. Jacob Tierney) is an impressive modern adaptation of Charles Dickens’ classic novel Oliver Twist (1838), with the ‘twist’ being that the subjects are young male gay hustlers in Toronto rather than ragamuffin London-based pickpockets. The film is marked by fine performances all round, beginning with Nick Stahl as Dodge (the artful Dodger); Michèle-Barbara Pelleti as Nancy, the diner waitress and physically abused (and pregnant) wife of the threatening and always unseen “Bill,” the lord of the ragtag hustlers; Native American actor Gary Farmer as Fagin (in a wonderfully understated, morally ‘grey’ performance), and Joshua Close as the fey, naive, boy-doll Oliver. The film has a circular structure, beginning and ending on an identical but inverted scene of a hustling Dodge (in the opening scene) and a hustling Oliver (in the final scene), with the same customer, in the same motel room. 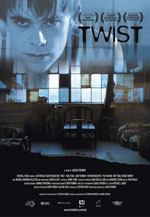 Twist makes an interesting companion piece to another recent Canadian film by director Tim Southam, The Bay of Love and Sorrow (2002). Unlike Tierney, for whom Twist represents his first feature film, Southam comes to The Bay with a more varied and experienced background. The Bay represents Southam’s fourth feature length film, coming after the documentary Drowning in Dreams (1997), the award winning children’s film (made for television) The Tale of Tikka (1998), and the nature gone amok horror film Island of the Dead (2000). Both Twist and The Bay depict surrogate family or support groups that slowly rot from within and end in the death of nearly all the central characters.

Twist begins with the camera outside looking in through a glass wall, and moves into the room through a series of cuts; as noted, the end begins inside the same hotel room and ends up outside looking in through the glass wall. The style also evolves to match the growing portent of dread, violence, and death. In the early part of the film the camera moves gingerly, panning in long telephoto style following the characters; the music is lighter, often accompanied by a female folk singer’s voice, and the editing is tighter, the pacing quicker. As the sense of fatalism grows stronger, the music becomes darker, instrumental music replaces vocal, the shots become longer in duration, the camera less mobile, and the lighting more low key.

Bay also shares with Twist a visual style which evolves as the story gets darker –in this case the style becomes more expressive (Gothic). In Bay, set in a sleepy 1973 New Brunswick rural community on the Miramichi Bay, a group of youngsters, prompted by a slightly older ex-con Everette Hatch (Peter Outerbridge), attempt to form a commune-like economic system by pooling together their money.  Everette gets his idea of the commune from the campfire ramblings of the community’s surface ‘hero’, the blond-haired, good looking middle-class kid Michael Skid (Jonathan Scarfe), inspired from his recent trip to India. We soon realize that Michael and Everette both have more on their mind than fostering any idealist notions of community. Michael is a Casanova whose main goal is adding to his list of female conquests, the earthy, street-wise working class Madonna Braussard (Johanne Kelly), and the introverted and socially sheltered Carrie Matchett (Elaine Cassidy). Everette, meanwhile, has promoted the commune idea merely to involve Michael and Silver in a drug deal. Rounding out the group are Madonna’s pill-popping, impressionable brother Silver (Christopher Jacot), Carrie’s fiancé, the stoic farmer’s son Tom Donnerel (Zachary Bennett), and Tom’s mentally challenged brother Vincent (Torquil Campbell). 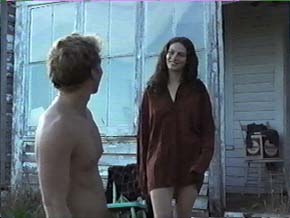 Like in Twist, the family plays an important role, as both a functioning or non-malfunctioning support system. In Twist we learn about Dodge’s troubled family history through his older brother David (Tygh Runyan), who drives from Montreal in an effort to bring him back home. Through a series of unsettling brother-to-brother conversations we discover that Dodge was sexually abused by his father, and essentially forced to leave home. Dodge holds his older brother partly responsible for not coming to his defense and in turn ‘condoning’ the father’s acts by remaining with their parents. Their relationship is anything but simple, and gets more perverse with each encounter, culminating in a powerful and hard to watch scene where the older brother, through a combination of guilt and vindictiveness, forces his younger brother to fellate him for money promised him (reminiscent for its queasiness level to the scene in Tsai Ming-liang’s The River  where the son unknowingly fellates his own father at a gay bath house, and Kietel’s car-side masturbation scene in Bad Lieutenant). 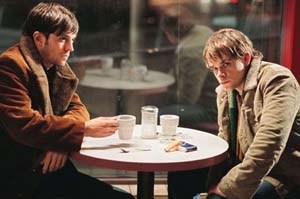 As in Twist, communal relationships turn to horror in Bay, and the first sign of the group’s disintegration appears within the surrogate family. Everette hatches a ‘surefire’ plan to increase their money pool by transporting drugs between New Brunswick and Prince Edward Island using Michael’s father’s boat, but the plan backfires and Silver and Michael are forced to throw the drugs overboard. This sets off a series of connected violent episodes as both Michael and Silver must now answer for the lost drugs to an angered and violent Everette. Silver escapes his misery by miring himself further in drugs. Michael, who must contend with the misguided amorous attentions of Carrie, sinks into a depressive state of denial. Carrie has the mistaken impression that a lack of money is all that is keeping her and Michael from leaving town together, so she takes matters into her own hands and steals her mother’s life savings. While walking through the woods that night Carrie is accosted by a stoned Silver, who chases her and hits her from behind with a fatal blow to the head. He looks into her bag and finds the tin full of money, which he sees as a solution to the botched drug deal. Silver hides the evidence of his murder (his bloodied clothes) in his family tool shed, and gives the money to Everette as payment for the lost drugs. He then throws the empty tin container into an open field near Tom’s farmhouse.

Vincent discovers Carrie’s corpse in the woods and carries it back to their farmhouse, at which point Tom calls the police. The police find Carrie’s tin, which make Tom and Vincent the prime murder suspects. In the following scene Madonna finds Silver’s bloodied clothes in the tool shed. Unable to bring herself to incriminate her brother, Madonna brings the evidence over to Michael, who is largely responsible for Silver’s predicament, and asks him to exonerate the innocent Tom and Vincent by presenting the evidence to the police. After a bout of soul searching Michael achieves a moment of redemption by giving himself up to the police. An increasingly edgy and volatile Everette confronts Madonna and learns that she is aware of his indirect involvement in the murder. Everette threatens to kill her brother Silver, which triggers Madonna’s protective instincts. Everette pushes Madonna to the ground and kicks her to death (the blows occurring below frame). This death has its mirror in Twist in the scene where Nancy is beaten to death by her brutal husband Bill, only in this case the murder occurs in our mind’s eyes, offscreen. By the end of both films, everyone is either dead or in prison, while only Tom and his feeble brother, Vincent, the only two characters wholly free of a crime or of acting immorally, are free.

Both films belie the often noted critical statement that Canadian films are less prone to violence than their American counterparts, only here, in both cases, the violence is a) muted and always kept offscreen and b) is dramatically important and justified. For example, the adage violence begets violence is one of more facile points in Twist, but it is nonetheless used to serve a dramatic point. For example, Dodge clearly suppresses an affection he has for the young Oliver, who he cruises at a café and initiates into the group. Perhaps it is a paternal feeling, but he remains Oliver’s protector during Oliver’s first hustling acts. In turn, Oliver yearns for Dodge’s affection, perhaps even to be his lover, but Dodge is unable to reciprocate any physical or emotional expression of love. In a later scene Dodge again meets a lonely street kid and tries to round him up for Bill. Instead he gets rolled over and beaten by two gay bashers. A few scenes later he reacts violently to Oliver’s pleas of affection and love by pushing him off his bed and viciously kicking him below frame line.

Where these two films remain quintessentially “Canadian” is in their lack of a true heroic figure. Dodge ultimately satisfies our desire for retribution against the vile (if unseen) Bill by shooting him in his home, but we are denied the visceral satisfaction that would come if we were to see Bill die. It is interesting to relate this to the equally anonymous but far more mythified “Bill” in Tarantino’s Kill Bill films. The two ‘Bills’ can be seen as symbolizing the differences between Canadian and US ‘heroes/anti-heroes’: Tarantino’s Bill is kept invisible for a long period of time, but only as a gesture to further increase his mythic power by building up anticipation for his eventual appearance. Director Jacob Tierney’s Bill is never seen, but strongly felt through the signs of violence we witness on Nancy (a black eye) and the timidity of her voice when on the phone with Bill. Fagin has genuine sympathy and feelings for his motley gang of hustlers and outcasts, enforcing Bill’s law, but also protecting them. He is not, however, a hero. When he learns that information he gave to Bill concerning Nancy’s attempt to convince Oliver to seek out the social comforts of a rich patron named “The Senator” (Stephen McHattie) has led to Nancy’s death, he commits suicide. In The Bay of Love and Sorrows the emotionally weak Silver also ends up unable to cope with his guilt and commits suicide. In fact, the closest to a ‘hero’ in either film may be the diner waitress from Twist, Nancy, who consoles and comforts the boys when they are in from the street with a song and dance, coffee, and free food; but she is murdered by an ‘invisible’ presence. The angelic Oliver is only fated to repeat Dodge’s fatal place when he is slotted into Dodge’s space in the film’s final scene.

In Bay the community welcomes two returning ‘prodigal sons’ who are hero material: the slacker, ex-con Everette and the blond-haired stud Michael. But neither fulfills the potential. Echoing Bay, where most of the central characters are either dead or imprisoned, in Twist all the central characters, both the good and the bad, the innocent and the complicit, are dead or transformed into emotional shells of their former selves. Twist and The Bay of Love and Sorrows confirms once again that traditional movie heroes are few and far between in Canadian cinema. 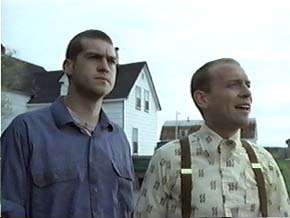