While In the Mood for Love is rightly lauded as a remarkable romantic story, focusing on the growing passion between a man, Mr. Chow (Tony Chiu-Wai Leung), and a woman, Mrs. Chan (Maggie Cheung), who learn that their respective spouses are having an affair, I would like to propose an alternative reading of their relationship which can exist alongside the more common ‘torturous love’ one. And on the surface of a film whose surface is so beautiful, the love story is front and center. Do they consummate their growing affection into something more? In a conservative 1960s Hong Kong, with eyes around them watching their every move, do they contemplate a new beginning with each other? Or do they use their will power to refrain from “becoming like them” [their unfaithful spouses]? Tears are shed when Mr. Chow opts to leave for work in Singapore rather than watch Mrs. Chan be reunited with her husband. Kar-Wai leaves things slightly open ended by brusquely jumping ahead first to 1963 (from 1962) and then 1966. In this new time frame, Mrs. Chan has a young child about three years of age (could it possibly be a child fathered by Mr. Chow?) and their paths, which crossed so frequently on the Hong Kong stairs down to the soup counter, now seem misaligned. She visits him in Singapore, going as far as leaving traces of herself in his apartment; and he returns to the apartment building in Hong Kong where they met, but they miss each other. Mr. Chow’s final gesture is to enact the fable he recounted to his friend about how to immortalize a secret: go into the forest, find a tree with a hole in, whisper your secret into the hole and then cover it with mud. Mr. Chow enacts on this fable by whispering into a hole in a wall at the monumental religious temple in Cambodia, Angkor Wat. As viewers we are left to imagine this secret for ourselves. Could it have something to do with his love for her, or maybe that he is the father of the young child he has never met? 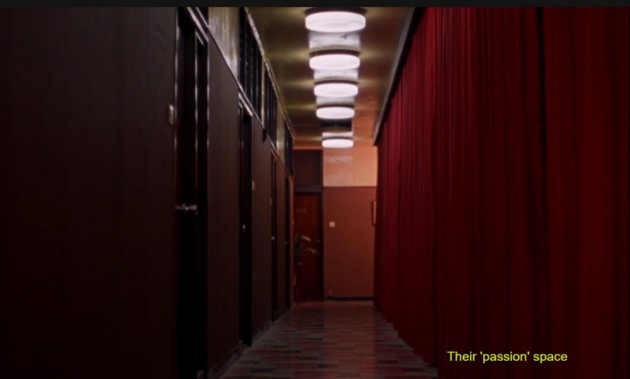 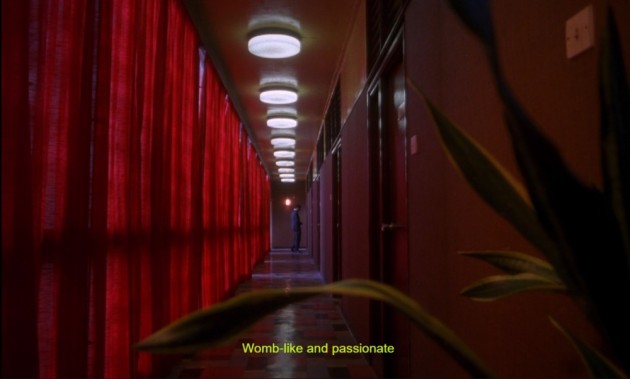 Living in such close quarters at the apartment building with such snoopy neighbors as landlady Mrs. Suen, makes it impossible for them to have any public interaction above a polite ‘hello’. Anything more would raise suspicion in a conservative Hong Kong of the 1960s, which in fact happens when Mrs. Chen’s boss passes on a phone message from Mr. Chow to Mrs. Chan, then raises an accusing eye at her before continuing with his work. It matters little that the boss is openly cheating on his wife, going as far as asking Mrs. Chan to buy special gifts for his mistress. But this double standard only makes the actions between Mrs. Chan and Mr. Chow even more potent. The couple arrange to meet at a hotel, whose corridor is symbolically lined by a wall of deep red curtains that can only underscore their searing passion. And what do married people meeting at a hotel do? What Marion Crane and Sam Loomis do at the beginning of Psycho of course, make love. But is this what Wong Kar-Wai has them do? Although the audience can possibly infer this, what they ACTUALLY do is arguably more progressive from a gender standpoint. Rather than make love, what we SEE them do, in what is for me the centerpiece scene of the film, is collaborate on the writing of a martial arts novel Mr. Chow is writing. Apparently Chow Mo-wan is patterned after Chinese pulp author Jin Yong (who authored the story Ashes of Time, which Kar-Wai would adapt), a narrative device which will be developed in the sequel to In the Mood For Love, 2046. Mr. Chow works at a printing press, but his passion is writing and he wants to share this passion with Mrs. Chan. In this long scene, told mainly without dialogue and silky smooth lateral tracking shots, the two would be lovers are framed equally throughout, each in a state of intense writing. 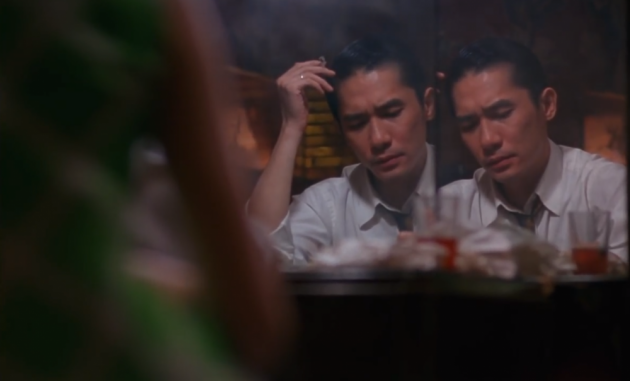 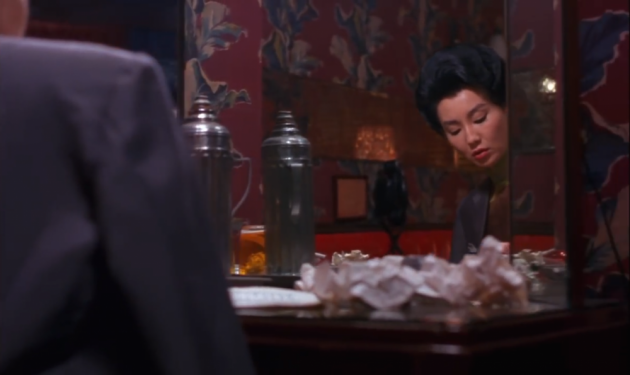 To step back, the scene opens with Wong Kar-Wai’s jagged, jump cut editing representing Mrs. Chan’s indecisiveness as she continually starts and stops her mounting of the hotel stairs to his room. The scene is a textbook example of non-linear, repetitive editing to depict a harried mind. At one moment she is at the bottom of the steps, then at the top, then back at the bottom, in the corridor at top, back to the bottom. It is almost comical in context of the film’s languidness. 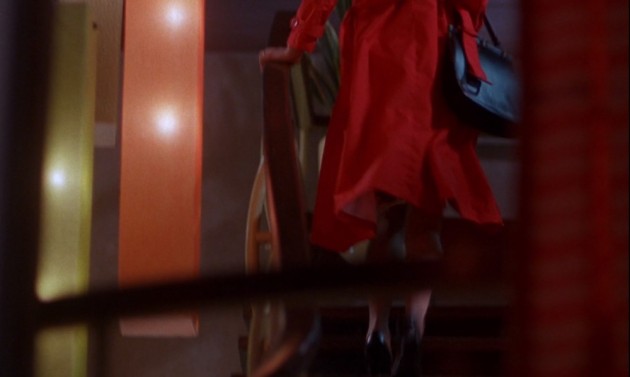 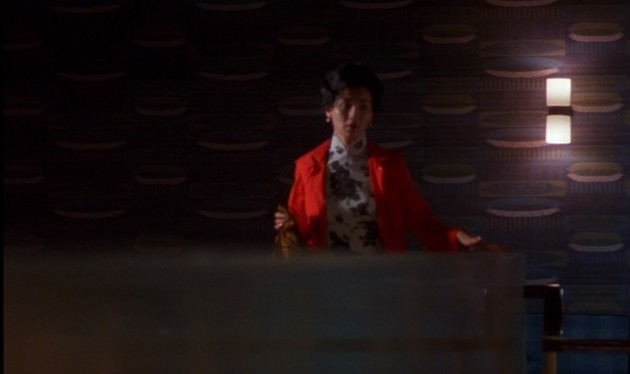 The stair sequence is cut by a languid close-up of Mr. Chow in the hotel room, framed in a mirror waiting for her, an image which becomes central to the film’s sense of melancholia and nostalgia. Whenever we see this mirror what my eye gravitates toward are a series of semi-circular smudges visible on the surface of the mirror. Their presence subject to the focus range of the lens, so that when the camera refocuses to the background, the smudge disappears from view. No longer visible but still there (more on its meaning later).

The scene cuts to Mrs. Chan LEAVING the room, but wearing the same red rain coat we saw her with at the start of the scene, telling the off-screen Mr. Chow that she will return tomorrow. Chow shuts the door to reveal the symbolic door number “2046” the year China’s “one country two systems” policy ends. Then slowly walking down the red corridor only to literally stop time in its tracks by holding still. This cuts to the “collaborative writing” scene, to return to this point from earlier. Mrs. Chan writes at his desk while Chow eats. She calls him over to read what she has written, and the camera tracks left to frame them both through the transparent window curtains. What’s most telling is that Mrs. Chan has her coat draped over her shoulders, making this the one and only time we DON’T see her dressed in one of the 20 or so cheongsams she wears throughout the film. 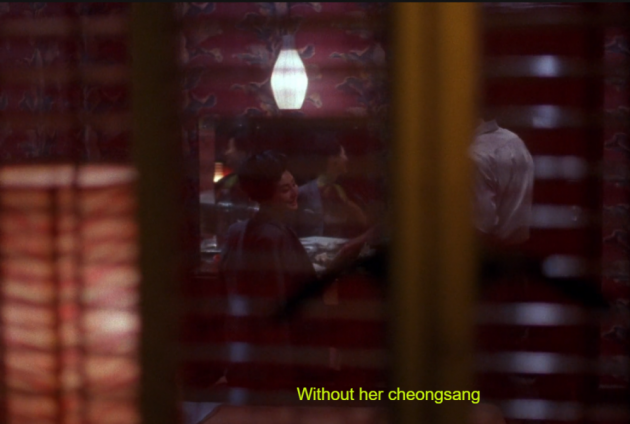 A rare moment: without a cheongsam visible

This is symbolic, as it “de-feminizes” her in a specific sense and relates to my point of how this “shared artistic collaboration” between a man and a woman writing something intended for a largely male audience is a more brazen and progressive political gesture on Kar-Wai’s side, during a conservative 1960s Hong Kong, than the actual affair. I haven’t researched this but my guess is that there were not many Chinese women writing pulp novels in the early twentieth century, which potentially makes this plot point even more progressive. The left to right lateral tracking shots twinning their mirrored reflections is a formal underscore of this “shared collaboration” between them. In the next tracking shot we catch her reading (or singing?) to him out loud. Perhaps this is Wong Kar-Wai’s way of expressing an ideal male-female relationship, one based not only on sex, children or work, but on shared creativity.

On another level, we can read their affair as progressive in the sense that it is not just the MALE cheating on his wife, like Mrs. Chan’s boss, but BOTH man and woman. The scene finally ends by cutting to the famous (and very funny) “rehearsal” scene, where Kar-Wai fools us into thinking she is confronting her husband about his infidelity, until the scene cuts from behind the man’s shoulder to reveal it is not her husband but Mr. Chow, PLAYING the role of her husband as she rehearses an action that she will never enact in reality (or so it seems). 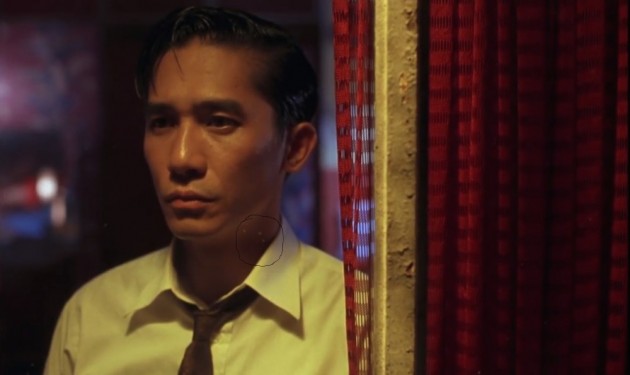 To return to the “smudge” on the mirror, this ingenious bit of set design is a mise en abyme of the epigraph that closes the film: “He remembers those vanished years. As though looking through a dusty windowpane, the past is something he could see, but not touch. And everything he sees is blurred and indistinct.” The smudge on the mirror is a grand metaphor for the film’s central visual aesthetic of blurred imagery (rain, billowing smoke, shooting through curtains, condensation-smeared mirrors, and the famous step-printing effect, which Janice Tong cleverly described as “smudge time”). The smudge on the mirror is like the ‘secret’ at the end: something fragile yet permanent. With all the impermanence around him (love), Mr. Chow’s secret whispered into a hole will remain there forever. Like-wise the smudge, though it disappears from our view, remains present. The smudged mirror serves also as a metaphor for memory, and how we sometimes can see clearly into our past, with perfect recall, while other things, events that may have caused us pain, harm or are insignificant, are blocked or unclear, like the smudged mirror. I will conclude with another observation unrelated to the above points but has some interesting reverberations in terms of the film’s standing as a postmodern text. The final scene sees Mr. Chow whisper his secret into the fabric of the Angkor Wat monument and then cover it with twigs and grass, keeping it ‘alive’ and buried for eternity (fulfilling his desire for something permanent). Incidentally, this scene is a noted influence on Sofia Coppola’s Lost in Translation, and the moment at the end where the Scarlet Johansson character whispers something into Bill Murray’s ear (the opening shot of Johansson’s character lying on her bed with her back to camera is also a direct reference). A more recent film, the outstanding A Ghost Story, a film perhaps even more steeped in the theme of memory than In the Mood for Love, seems to pay a homage to the ‘secret’ scene through the device of the grieving wife (Mara Rooney) who writes some words down onto a small piece of paper and then hides the paper between a crack in the wall, thinking that with her husband now dead, the secret words will remain secret forever. Unbeknownst to her, the ghost husband retrieves the note at the end of the film, and once reading it, leaves the material world forever. 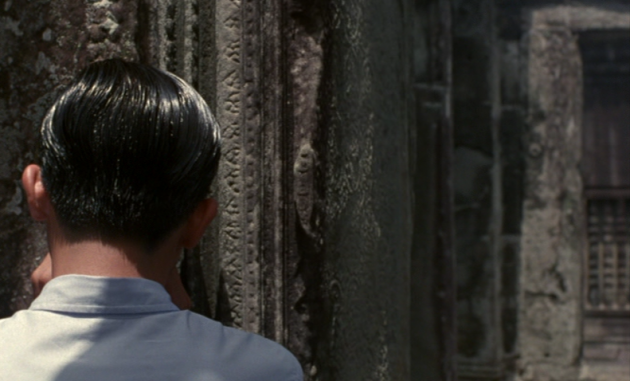 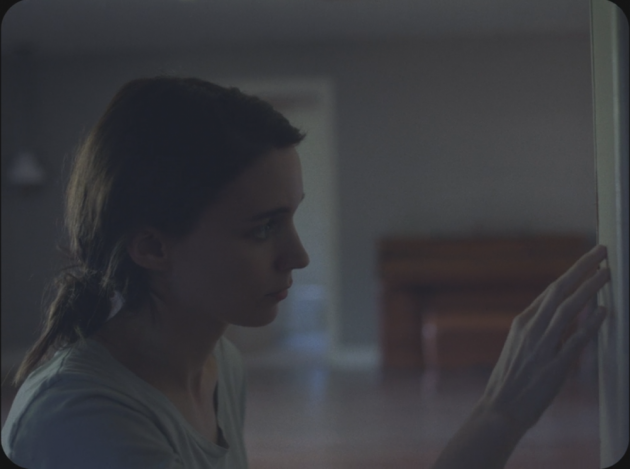 In the Mood For Love and A Ghost Story

After depositing his secret into the hole in the wall, Mr. Chow leaves the location and is never seen again. But the film does not end immediately with his departure. Instead the camera begins to track around the monument, showing us the interior and exterior of this gorgeous architectural space of Angkor Wat. In one moving shot it assumes a low angle position framing the upper ceilings. Another shot is framed from inside looking through an opening at symmetrical manicured shrubbery. Could this be Kar-Wai’s sly tribute to the opening of Resnais’ Last Year at Marienbad, another film that deals with memory, nostalgia and ambiguous love? 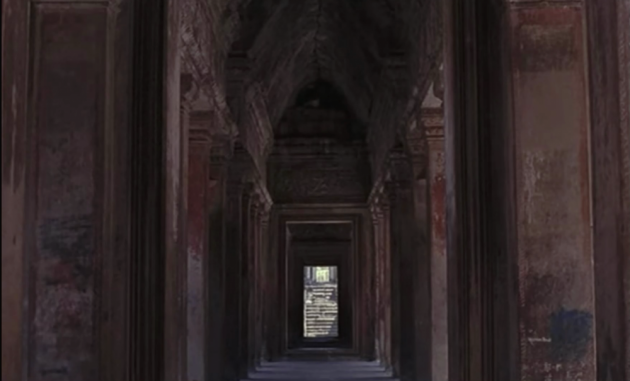 PS: This discovery inspired an audio-visual essay which can be viewed on our companion website Zoom Out.